Dave Chapelle said, “Modern problems require modern solutions.” in 2004. He probably didn’t know it would launch hundreds of thousands of memes 14 years later. The now-iconic line was from a skit in the Dave Chapelle Show where he mock-advocated the use of fake Canadian ID cards for free healthcare. And now the internet is using the catchy phrase to present how we deal with modern problems. Most of the modern problems memes are will have you chuckling and shaking your head. But sometimes, it can also have a sobering effect.

Before launching the popular meme format, Imthatguy25 used to think of the iconic Chapelle line as a motto. “I’ve watched Chapelle’s Show since I was a kid so the ‘modern problems’ quote has always been something I’d regularly quote to myself or to some others,” Imthatguy25 said. “I basically treated it like it was a motto.” When you think of it, it makes a great mantra. 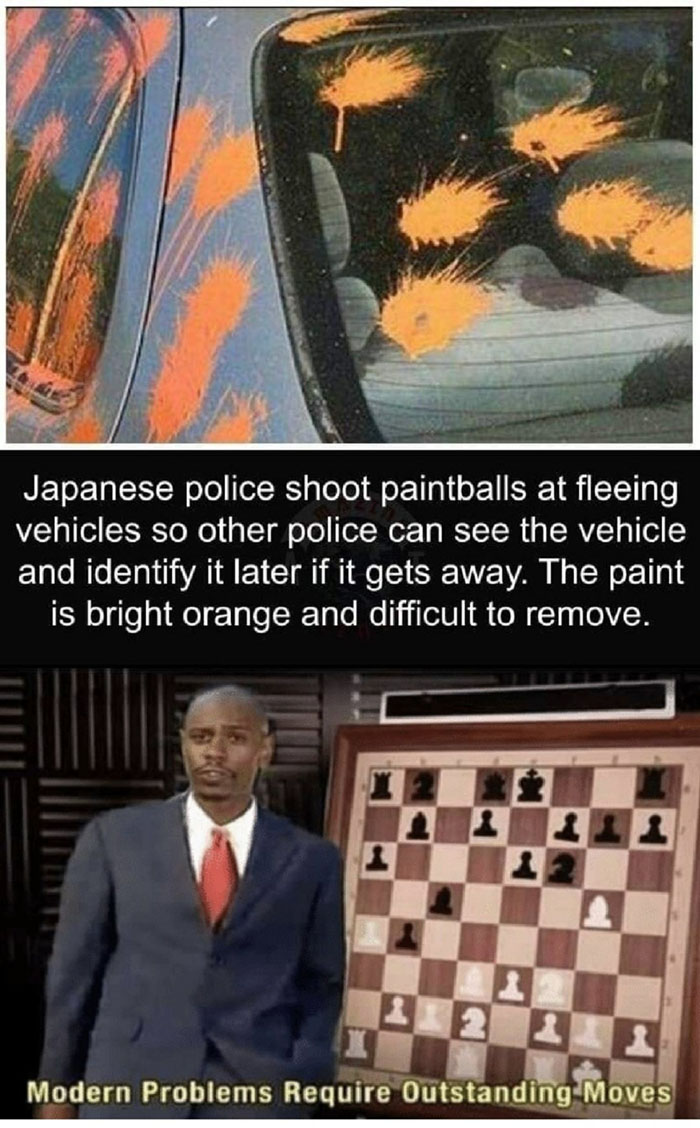 These were the first ‘Modern Problems’ memes ever 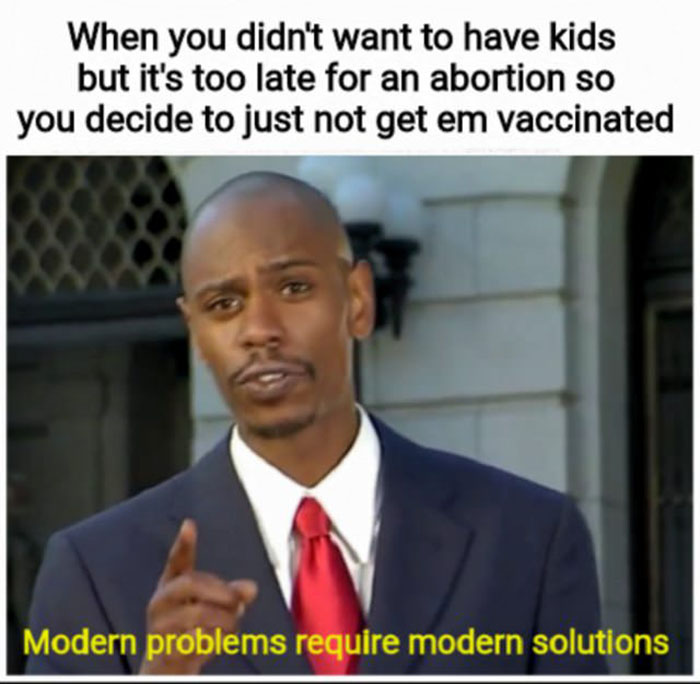 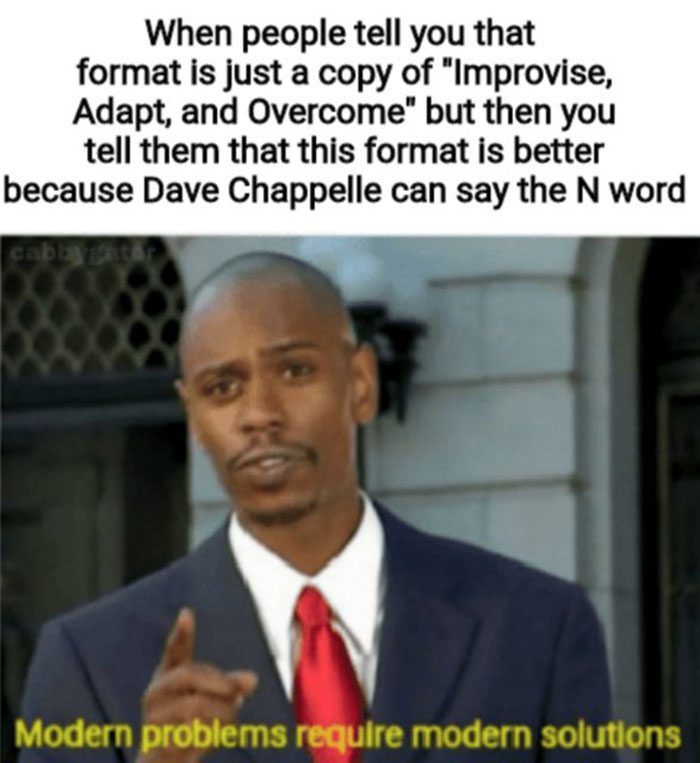 The very first ‘Modern problems require modern solutions’ memes were published online in December 2018. They sent their format over to /r/MemeEconomy, along with a screenshot of a quote about vaccination. Their post earned over 31,000 points. Then, another Reddit user, cabbygator, used the format to make a joke about Fortnite and went on to amass 45,000 points. More and more users began to use the format,and the rest was history.

It’s basically another version of the famous Bear Grylls meme 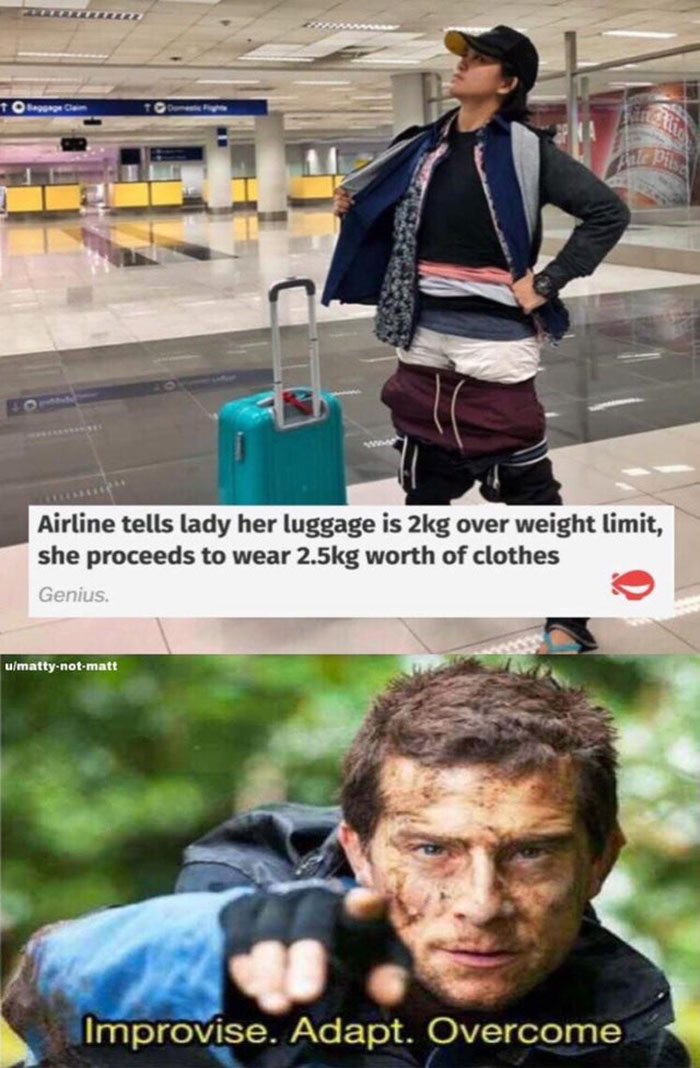 As we mentioned, it didn’t take long for the meme format to become a viral hit on the internet. “I honestly didn’t expect the format to pick up much traction,” the Reddit user expressed. “Until I saw a bunch of other Redditors hit the homepage from using the format and making their own.” Was the meme format’s creator really surprised to see it become wildly popular format? Apparently not. 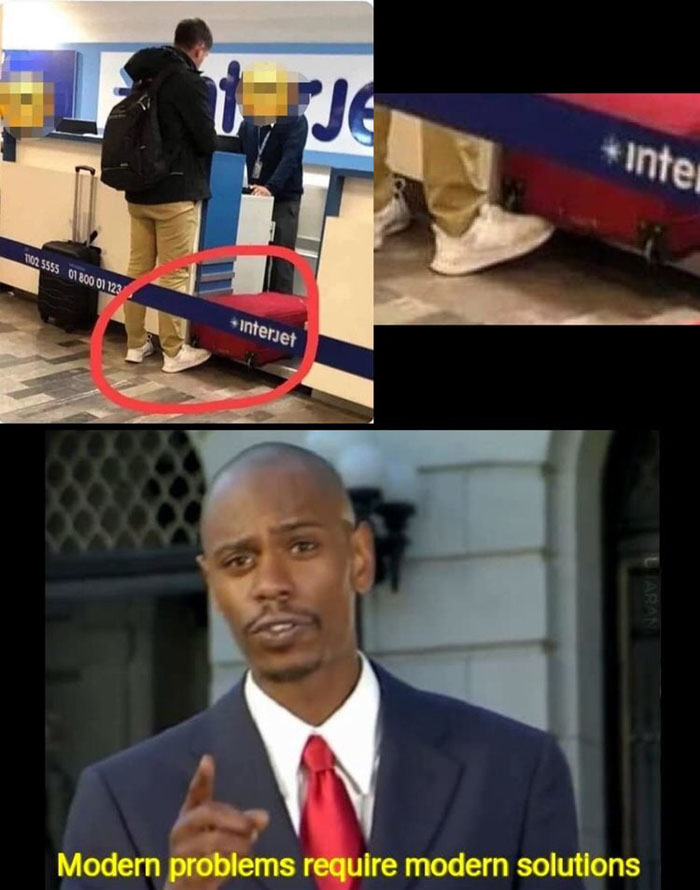 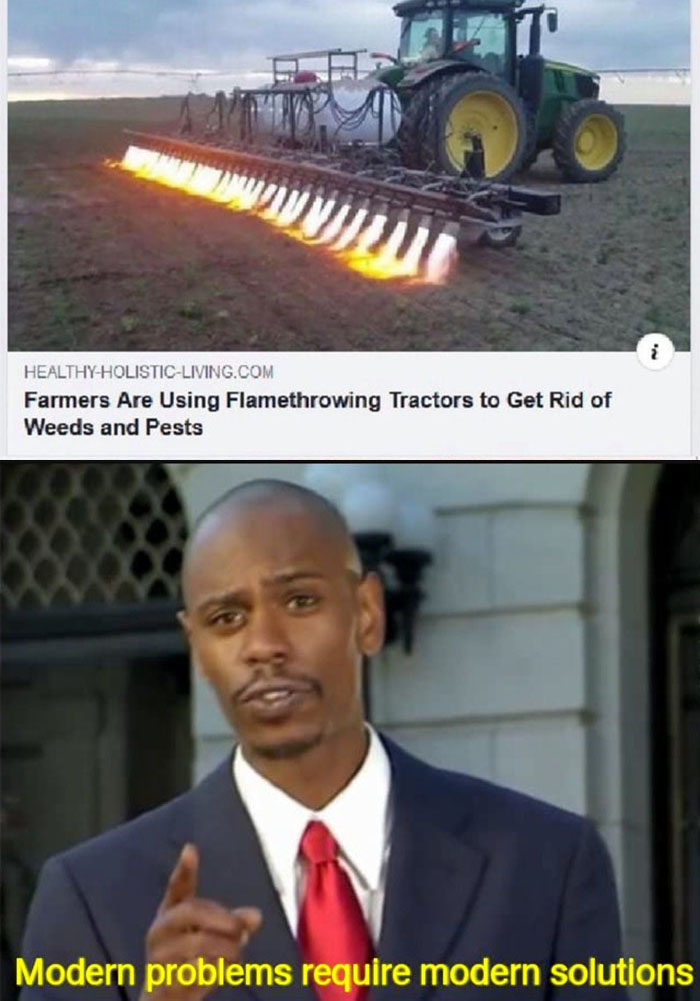 “Other than the obvious, Dave Chapelle is a comedic genius, and everything he says is meme gold,” Imthatguy25 said. “Redditors can be pretty clever when they see a meme that they believe has potential.” After all, nearly all of the most popular memes to rise to fame on the internet came from Reddit’s archives. 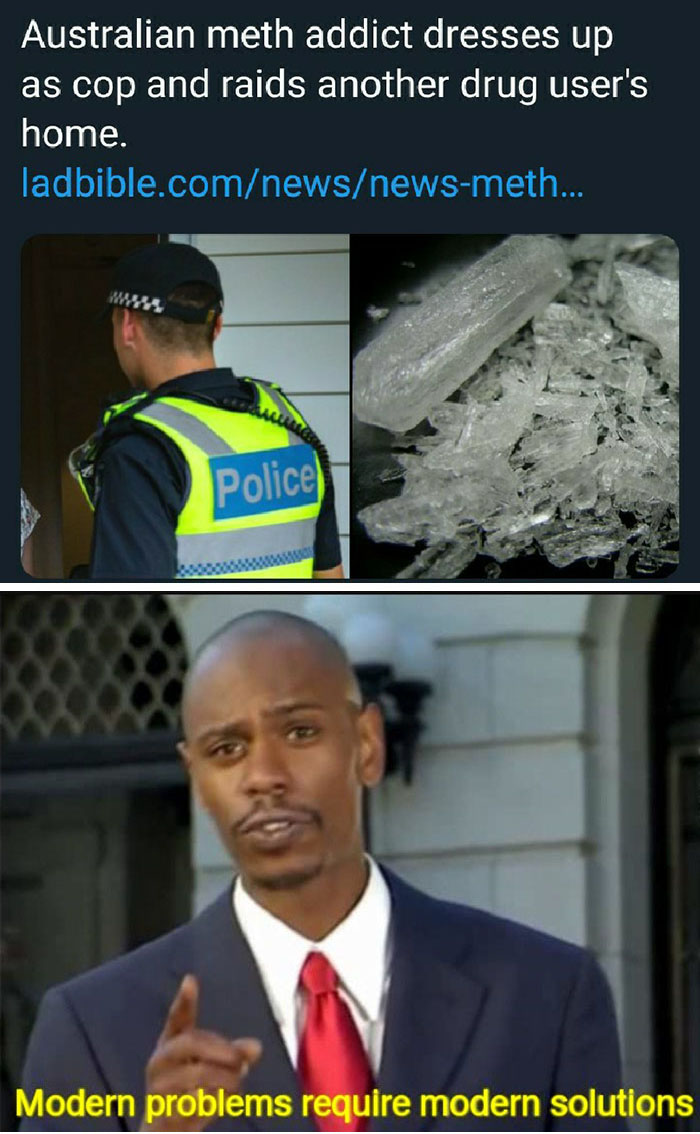 People began using the meme to highlight issues in society to

“The meme alone was [a] pretty cut and dry, simple to understand,” Imthatguy25 noted. “But like I’ve said, Redditors have their own vernacular way with memes. I’ve seen this dude rage war with Instagram using my format and managed 100,000 upvotes over it. I honestly owe it to Reddit and Instagram for making the meme so shareable.” The meme format is highly relatable as it allows people to make a lighthearted commentary about social issues and current events. Many may find this particular meme to be entertaining, but some of the content attached to the meme present some pretty sobering stuff, like when a man robbed a bank for a dollar so he could get free healthcare and meals in prison. 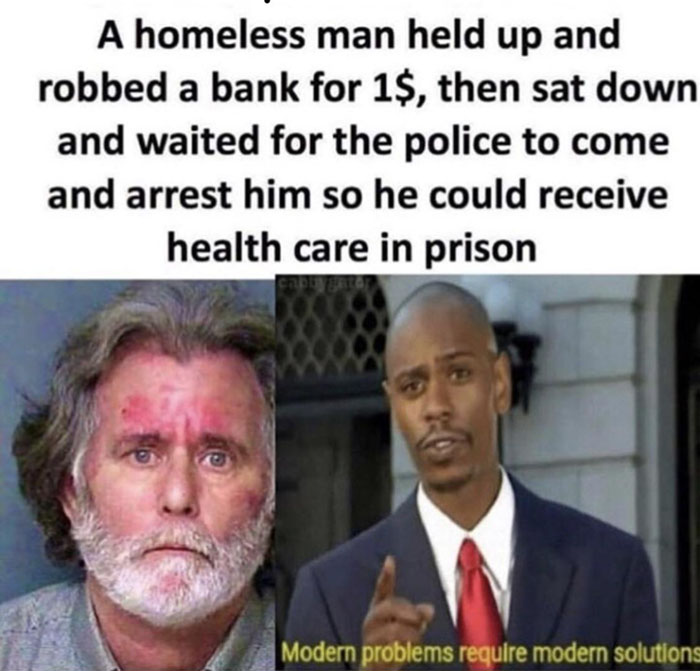 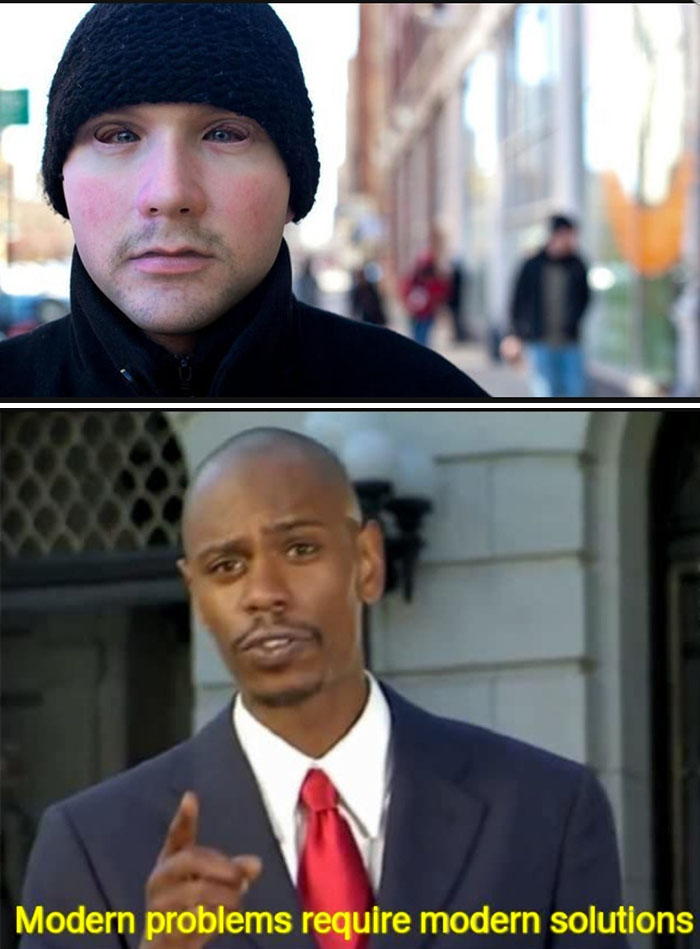 Basically, the Modern Problems Require Modern Solutions Meme is a spinoff of the “Improvise, Adapt, Overcome” format. It showcases the people’s ability to come up with a compromise when faced with an uncommon challenge. Imthatguy25 said that they don’t mind other people using the format for social or political commentary, just as long as the content is funny and entertaining. “I’d at least like to see it with a bit of wit behind it,” they said. “Really, as long as it’s funny I could stand behind it.”

You can use the ‘Modern Problems’ meme format on almost anything, whether it’s good, bad or ugly

A lot of Modern Problem Memes focus on hilariously ingenious ways strangers win against the system. For example, a young man went viral when a photo of him ‘footing’ his luggage bag at an airline’s check-in counter to (possibly) keep it from going over the allotted weight limit. Then, in another post, a woman responded with their airline telling her that she’d have to lose 2kg from her luggage by wearing 2.5kg worth of clothing. These types of ‘news’ will definitely earn a snicker or chuckle because we all know how frustrating (and sometimes unnecessary!) airport rules can get. So if anyone ever manages to outsmart their established rules, their feat absolutely deserves the attention. 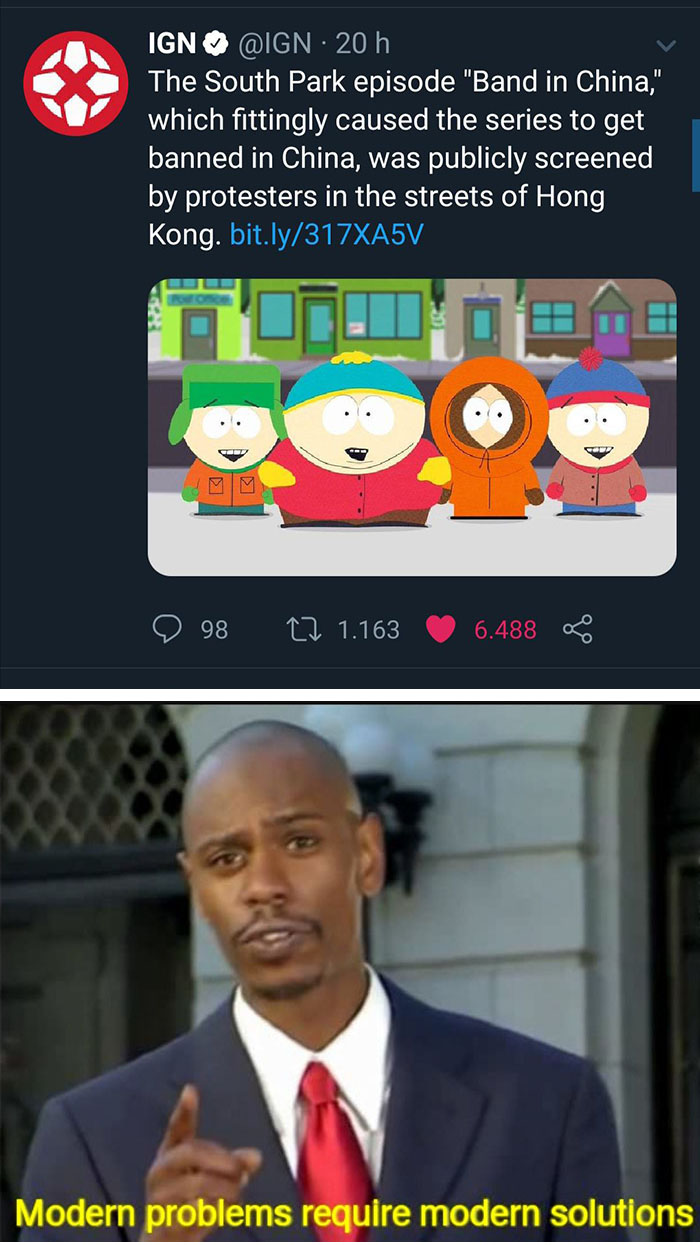 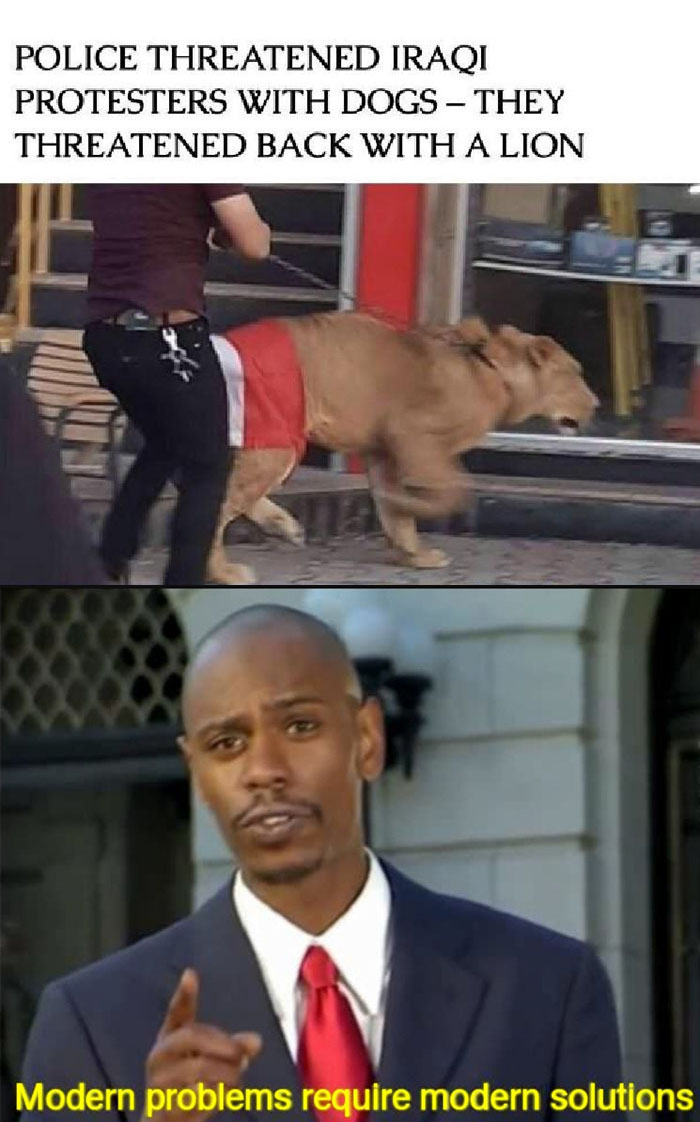 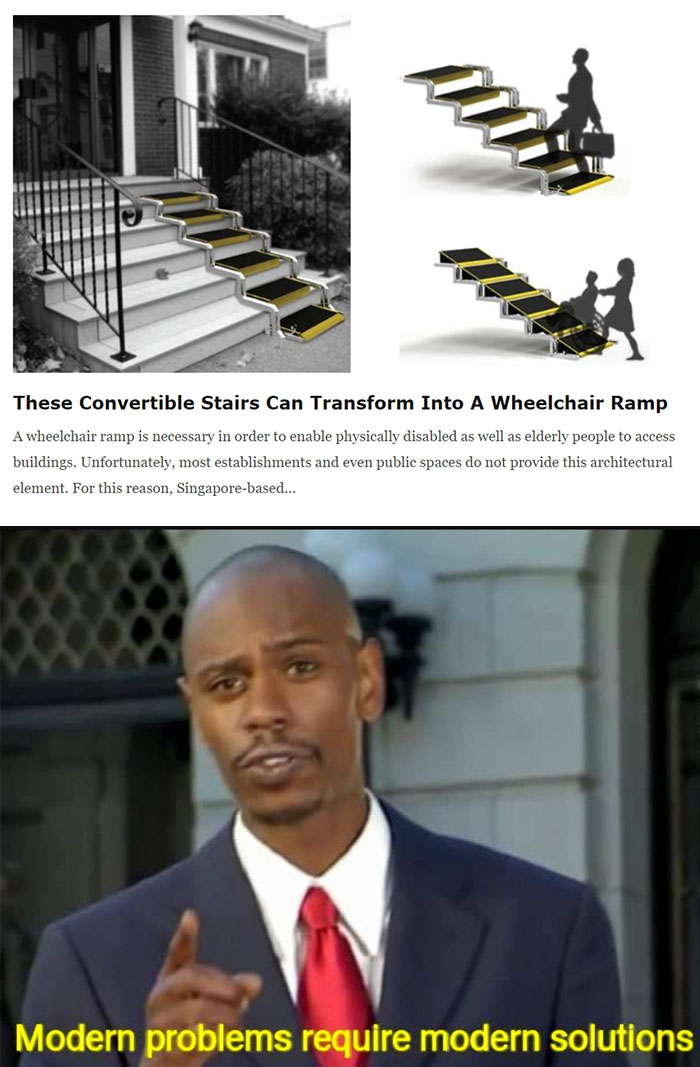 However, some Modern Problems Require Modern Solutions Memes tend to be a shot of bitter reality. Several viral ‘Modern Problems’ are born out of depressing events caused by sheer human desperation, like the case of the homeless man that robbed a bank because living in prison was better than living in the streets. If that didn’t tug your heartstrings even just a little, we don’t know what will. On the other hand other people are using the meme format to highlight spectacular innovations that address modern problems like accessibility issues and inclusion in brands like Crayola. 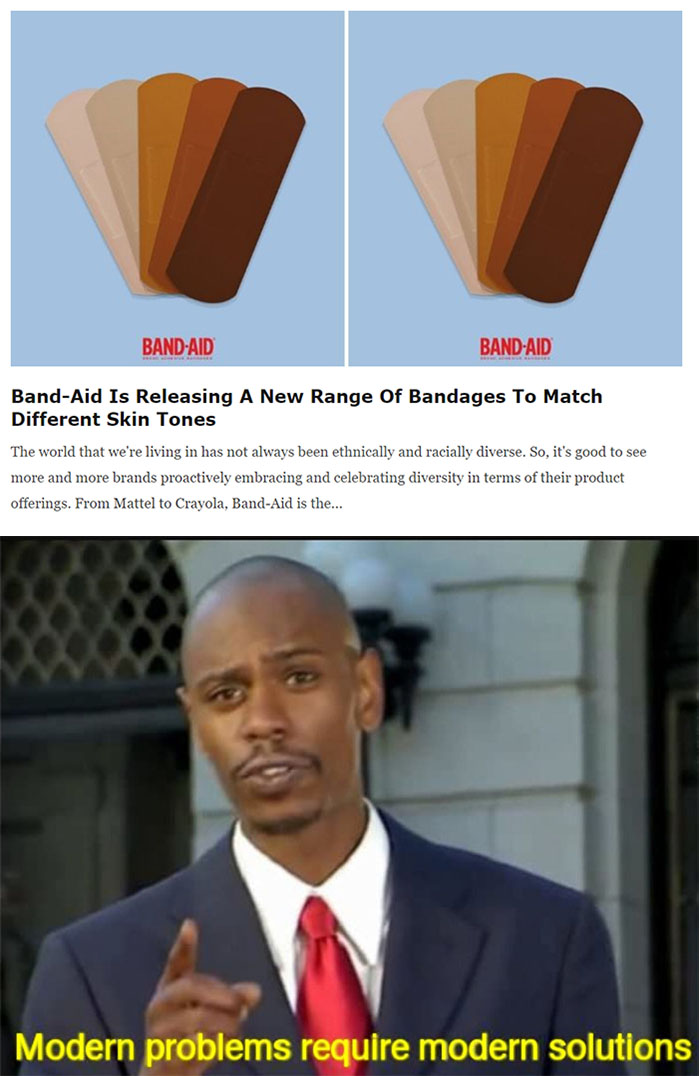 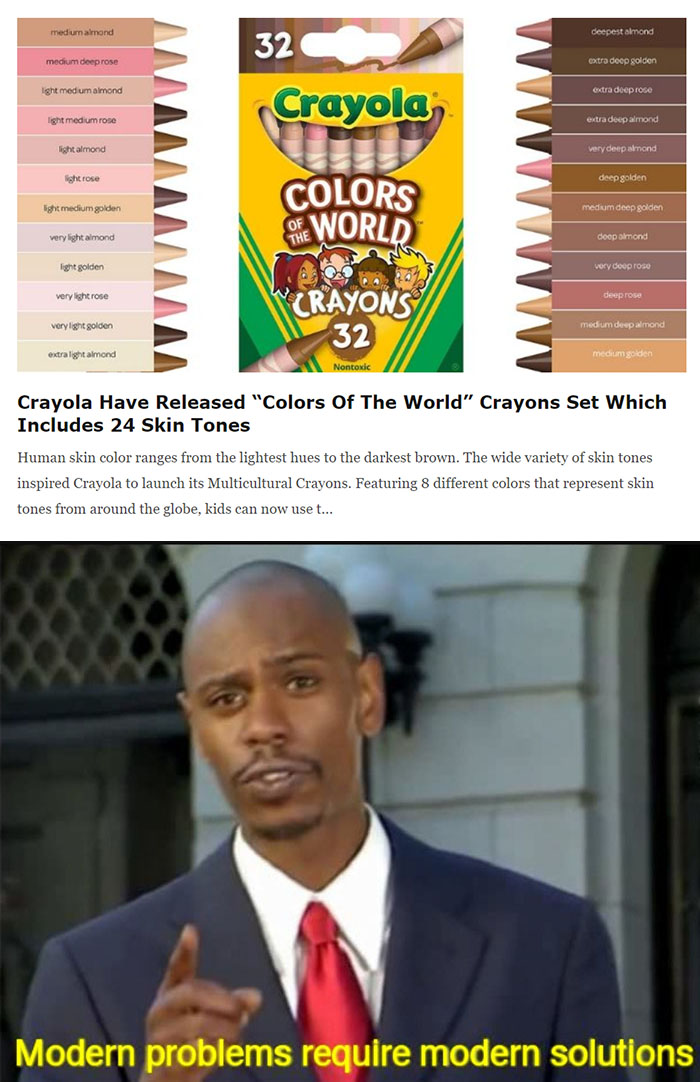 The United Nations predicated that we’d have plenty of problems to deal with this year. They mainly predicted the acceleration of climate change and the continued presence of inequality and exclusion. They added that the humanitarian crises in Syria, Yemen, Venezuela and other parts of the world will also be problem. Eerily enough, nearly all of their predictions have manifested in one way or the other.

For example, the Australian Bushfire that burned for 210 days certainly dealt the environment a critical blow. Several volcanoes have also erupted this year. The ongoing COVID-19 pandemic is upending lives and economies. Preventive measures have caused businesses to go into the red, which in turn spiked unemployment rates throughout the world. And now, the shocking tragedy in Beirut, Lebanon rocked the world with its terrifying and heartbreaking aftermath. 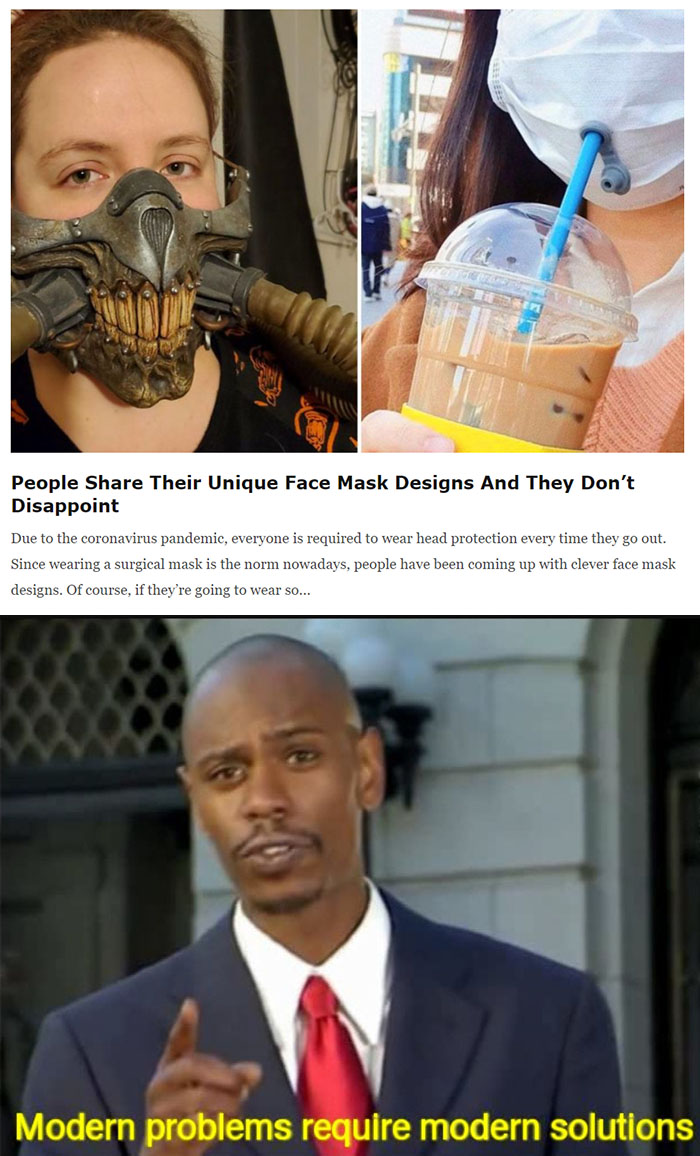 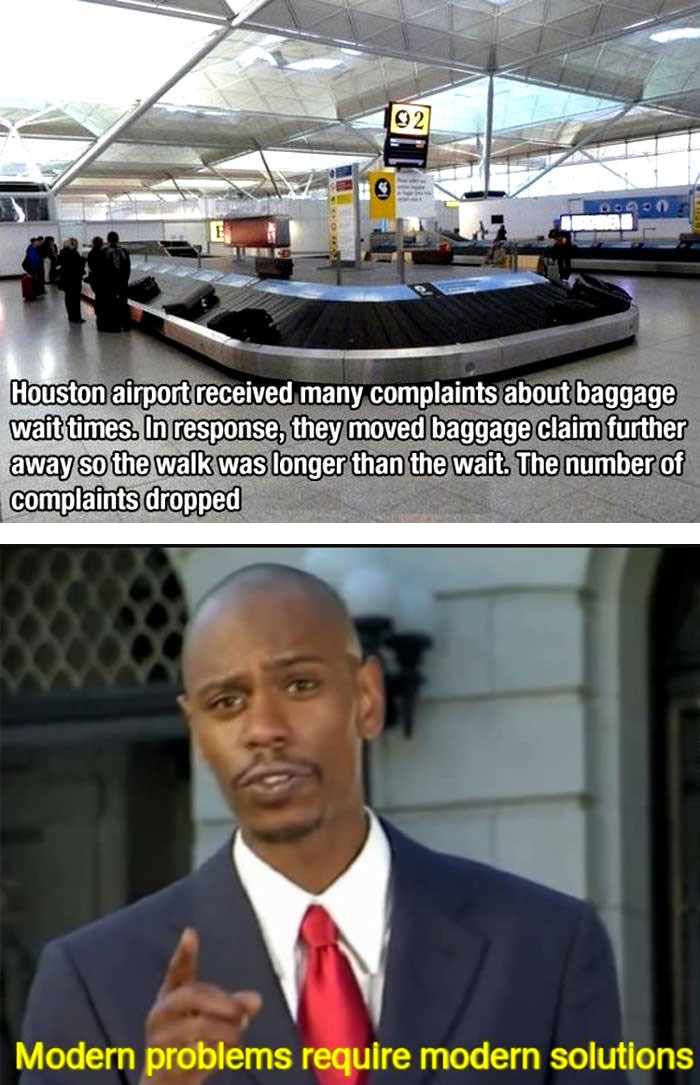 Massive scale neglect is thought to be the catalyst of the Beirut blast. Half of Beirut wouldn’t have been reduced to rubble had the ammonium nitrate been handled properly. The situation only goes to show that modern problems do indeed require modern solutions… effective, lasting solutions. Have you ever solved a problem in a hilarious way?