Would you buy a Lego funeral set for your kids? Life’s experiences are the best lessons one could ever learn in this lifetime. We grow up learning the ways of life based on our own experiences. However, guidance from our parents and other people can help us cope with our lives. Parents begin to teach their kids right from wrong early on. But most of the times, parents would avoid talking about death as much as possible. Naturally, the idea of losing someone dear to you may seem too much for a child to bear. Even so, teaching them about death early on helps them prepare for and accept the painful truth when time comes.

Children need to learn how to deal with life. This also means that they need to embrace all the bad things that come with it. Misfortunes and struggles are also parts of life. Besides, life will not be always smooth sailing. Teaching them how to deal with these difficult situations could help them a lot in the long run. That also goes the same with death. We’ll eventually have to face the fact that the people we love won’t be here forever. And everyone, even us, will have to face our own death someday. But no matter how parents try to open up about this sensitive topic, they can’t just put themselves to do it.

Bestattungsmuseum, a funeral museum in Vienna, aims to educate children about death by incorporating it with fun toys. The famous funeral museum launches the first ever LEGO funeral set aimed towards kids. This Lego set is based on funeral scenes to introduce this mournful episode of life. The Lego funeral set comprises of hearse and horse buggy which are usually used to convey the coffin to the cemetery.

It also features everything you see on a funeral rite, coffins, tombstones, gravediggers, and of course the deceased person. In addition to these, it also has a crematorium where you can insert a casket.

To complete the funeral parade, the Lego funeral set also includes a grieving father, mother and child. It also comes with a decomposed skeleton and cemetery personnel as a plus.

Dr. Florian Keusch, the Bestattungsmuseum spokesperson, decided to introduce the Lego funeral set to enlighten children about death. Dr. Keusch and his team thought of using Lego components to represent the scenes that will follow after death. “With these products, they can describe the process and the children can process their grief.”

The Lego funeral set is not an official LEGO product. Dr. Keusch’s team came up with the designs and an Austrian company constructed the bricks and all components together. Bestattungsmuseum introduces it as ‘Lego crematoria’ and you can buy the sets on the museum’s shop. It comes in four different sets with price ranging from 30 to 90 euros.

Here’s what people had to say about the LEGO funeral set: 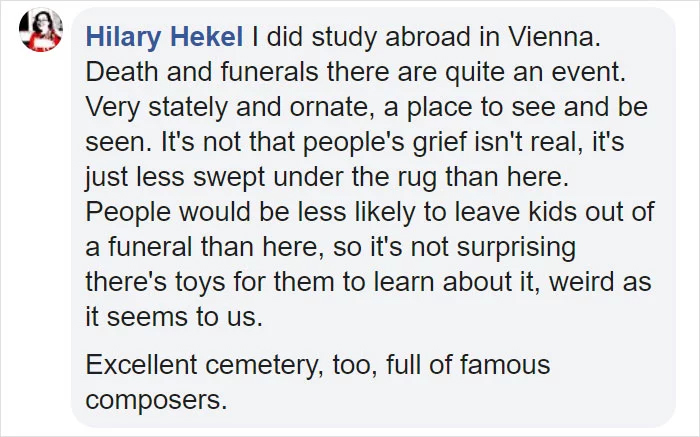