When you play a game, you’ve got to play the ‘adult’ way. If you enjoy the classic UNO card game, you’ll surely enjoy the Drunk UNO Game even more. We’re pretty sure you already know what we’re getting at just by reading the word ‘drunk’ on its name. And you’re right. This is a level-up version of the popular card game where there is booze involved. And when there’s booze, there’s fun, right?

Grown-ups went crazy with the Giant Tipsy Jenga where players get to take jello shots when they pull out a block containing the booze. However, not everyone is a fan of jello shots. If you’re anything like us, we want our booze to be as pure and ‘normal’ as it could be. Indeed, nothing can beat the traditional distilled spirits of alcohol in its purest liquid form. And if you happen to love the game of UNO more than anything else then this Drunk UNO Game is just perfect for you.

So, how do play the Drunk UNO Game? The rules are basically the same as the classic card game. Each player has to receive 7 cards from the dealer with the remaining cards placed down on a draw pile. The dealer then reveals the top card from the draw pile to start the game.

A post shared by Bowtastic Designs by Ivette (@bowtasticdesignsshop) on Dec 4, 2019 at 6:02pm PST

When a player has one card remaining in his hand, he must call ‘Uno’. If he fails to do that and another player catches him, the player with a single card will have to draw two more cards from the draw pile as a penalty. The round continues until one player has discarded all of his cards.

But here’s the best part about the Drunk UNO Game. If an action card is applied to you, you’ll get the penalty plus the shots. For example, if you discarded a Draw 2 card, the player next to you have to draw two cards from the draw pile. And also needs to take one shot. For a Draw 4 card, the player has to draw four cards from the deck and take two shots as well.

Shop With Customize Your Lyfe #drunk#drunkuno#drunkgames

The Drunk UNO Game comes with 4 shot glasses that you can fill with your favorite liquor. It could be vodka, rum, tequila, gin, whiskey, brandy, or whatever spirit you desire. Additionally, it includes a printed rule sheet specifying the number of shots for particular action cards.

Remember that if you forgot to call ‘Uno’ after discarding your second last card, you are subjected to a False UNO penalty where you’ll have to take three shots. The first player to discard all of his cards gets to choose who takes three shots. This is his reward for winning the game. 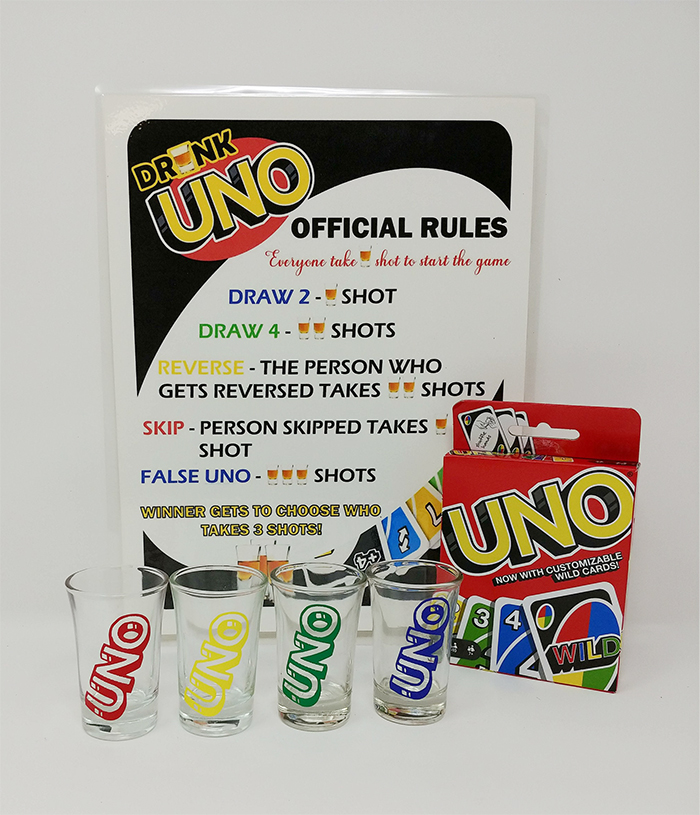 We know you’re excited to play the Drunk UNO Game with your friends. So, where can we buy it? You can find it available here. This listing includes a deck of UNO cards, 4 shot glasses, and a laminated rule sheet. We also found another listing that offers the UNO card deck, 4 shot glasses, and a framed rule sheet that all comes in a sleek box. Furthermore, this listing also offers an option without the UNO cards in lower price, just in case you already have lots of UNO cards. 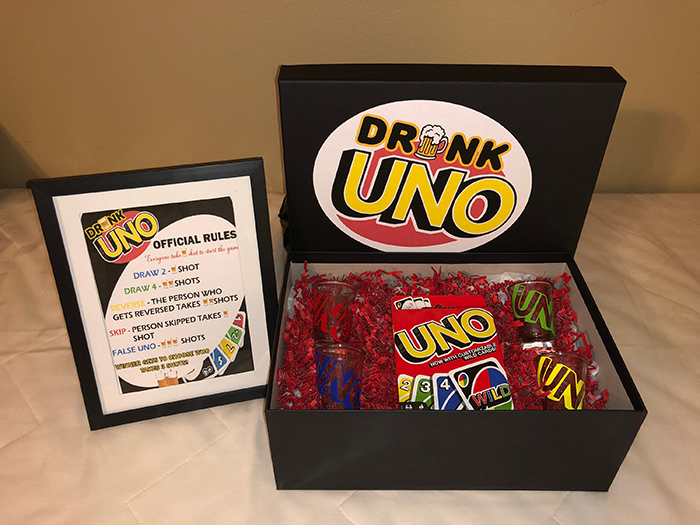