Cats are undeniably a bunch of talented creatures. For one, they have this unique ability to fall asleep almost anywhere. Then, they also boast some seriously surprising climbing skills à la Spiderman. So, cat lover Rob Coutu from Windsor, Connecticut decided to embrace his cats’ fascination with heights. And he did so by building them two kitty towers, complete with roof shingles, windows, carpets, and even light fixtures.

Coutu is father to two adorable kitties—a red tabby and a Savannah cat. Apparently, Coutu’s fur babies are loving his creations so much, particularly his Savannah cat named Zach. Well, it turns out that Zach has grown “possessive” of both towers that he wouldn’t let the tabby use them. Aww, poor tabby! Nonetheless, Coutu is still happy because Zach literally uses them all day long.

The cat owner drew inspiration from a real-looking cat tree that another fur parent has built. Keeping Zach’s “desire for a tall structure” in mind, he went on and constructed a high-rise tower for him. That way, it would be something fun, practical, and aesthetically pleasing at the same time.

The construction of the “Zach Tower” started in May last year. And improvements of which are still ongoing up to now. These include the constructions of Tower II, aka Chateau Zach, and a bridgeway connecting the two structures. So far, the project cost is already at $3,500 and is still mounting.

“The larger tower was built last and is almost complete. It incorporates some design changes based on how the cats interacted with the first one, such as the balconies and the deck landings. The dormer came from Zach, the Savannah, always looking up inside the roof of the other one.”

With over 16K followers on Facebook, it’s evident that other fur parents are loving Coutu’s designs as well. In a recent post, Coutu expressed his appreciation towards his followers. Moreover, he mentioned that he’s taking into consideration making his designs available for custom installation soon. In the meantime, feel free to check out his Facebook page for pricing updates and service availability.

People were amazed by Coutu’s level of craftsmanship 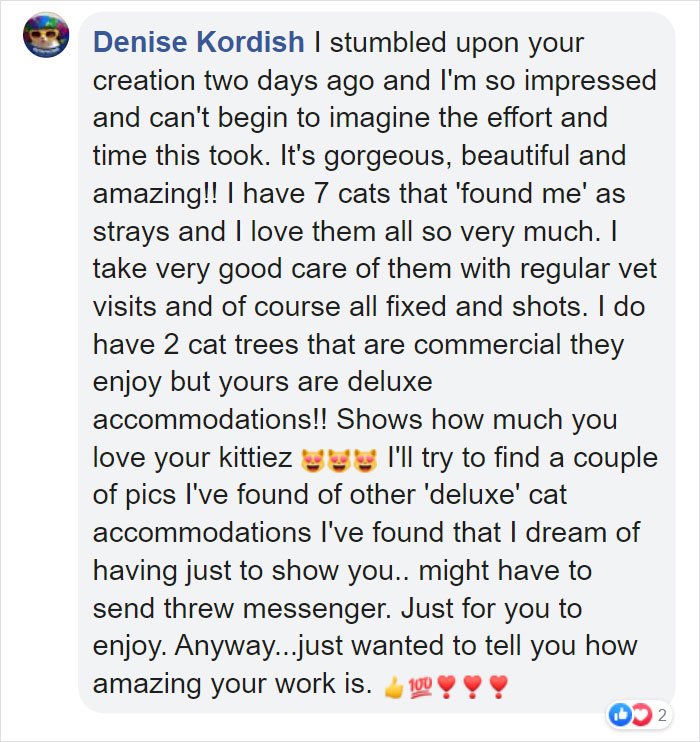