Tom Hanks is a legendary figure for many reasons. He’s entertained generations with his acting prowess. But the multi-awarded, established celebrity has endeared himself to the world for another reason. As a matter of fact, the two-time Oscar winner’s made a reputation for himself as the “nicest guy in all of Hollywood”. The actor’s fans and lucky strangers who’ve met him have only good things to say about Tom.

Meeting a celebrity is regarded as a special moment in any fan’s life. You are, after all, seeing the person who played your favorite character in your favorite movie, in the flesh. However, these encounters don’t always play out as nicely you’d hope. We’ve all heard about some star snubbing or being rude to a fan. After all, people aren’t always who you think they are. Those types of encounters can be pretty disappointing.

But Hanks is one of those rare individuals who never fails to be genuinely good. No matter who he’s talking to, or the circumstance of their encounter. He won’t run away from you just because he’s not “camera-ready”, unlike some celebrities. And he’ll really make an effort to make your interaction with him worth remembering. A couple days ago, people got together on Twitter to share their Tom Hanks experience, and here’s what they had to say: 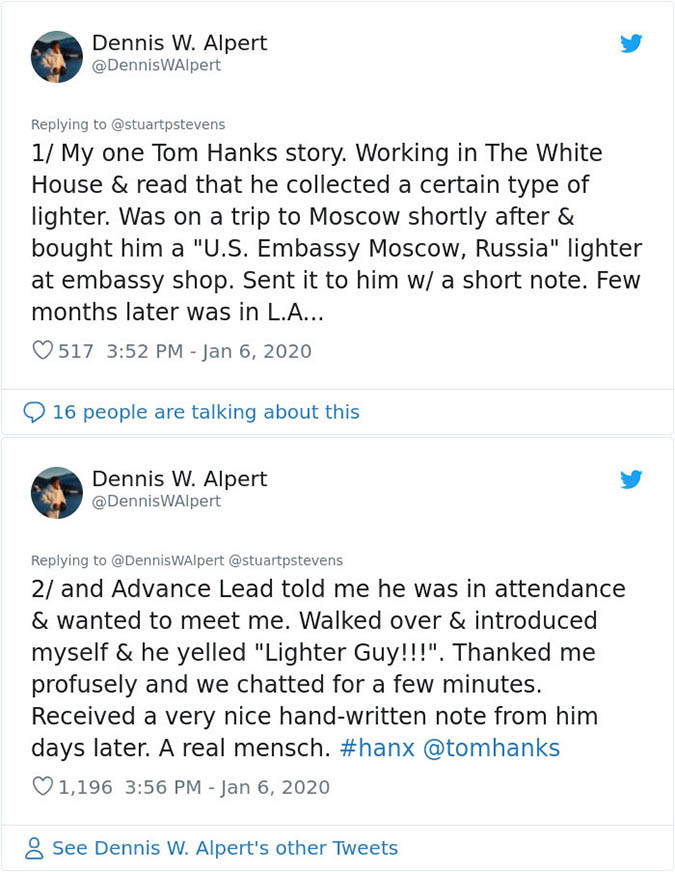 “He took the time to profusely shake everyone’s hand and chat with all these firefighters even though I’m sure he’d hoped he wouldn’t run into anyone up there.” 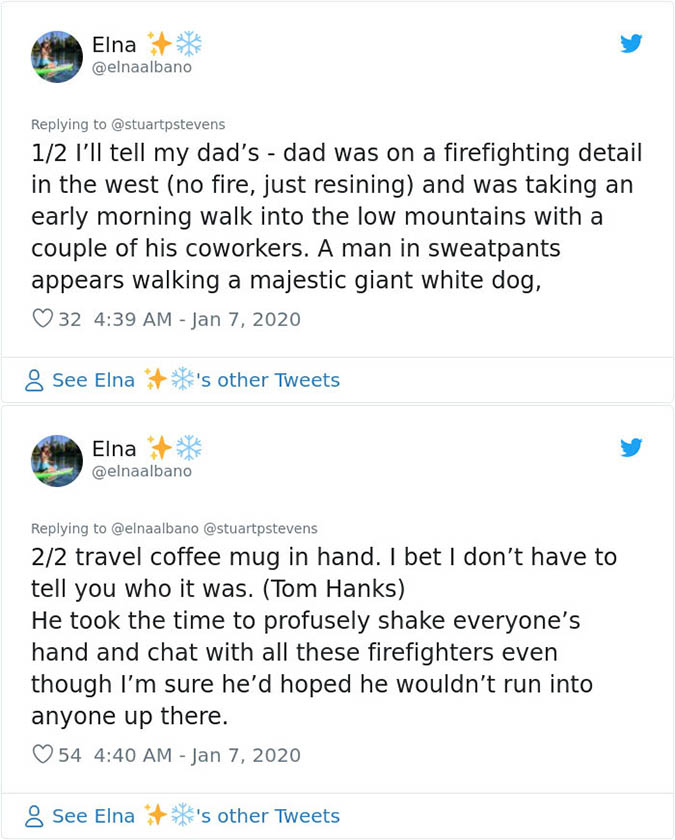 “Hanks called in – himself! – and made a donation.”

“He and his wife do a lot of good charity work” 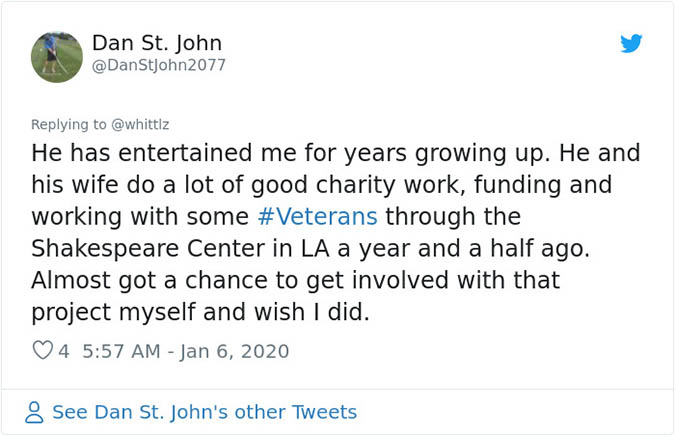 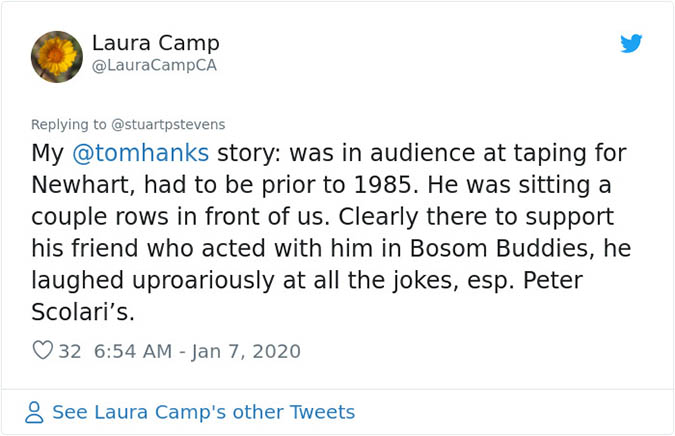 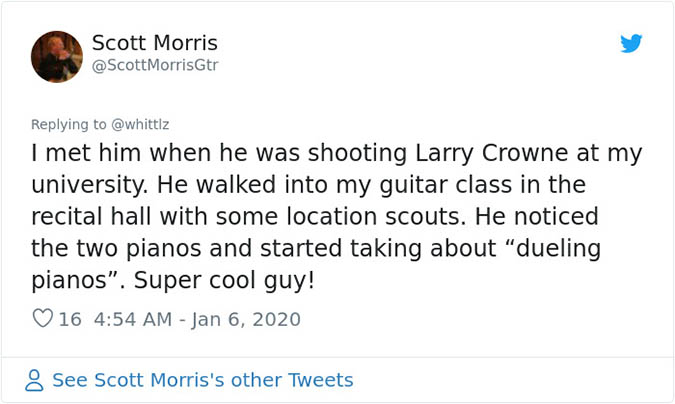 “One of the most genuine people I have ever met.” 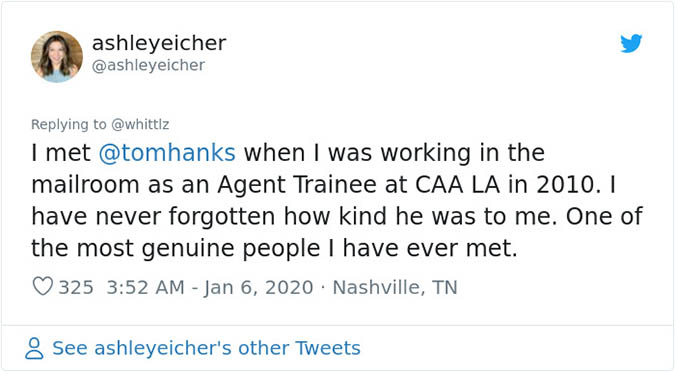 Hanks knows how to praise others, too. 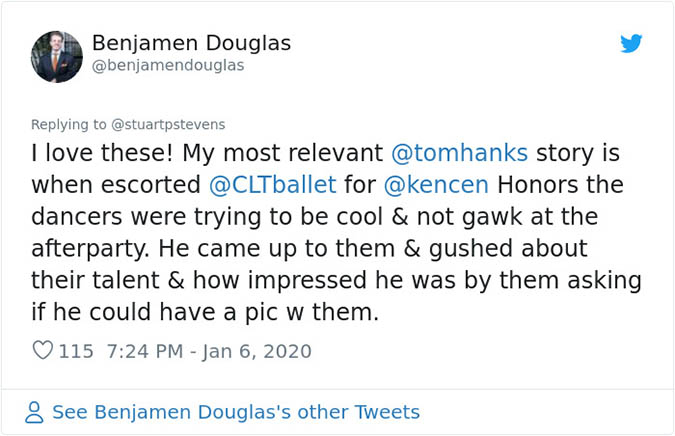 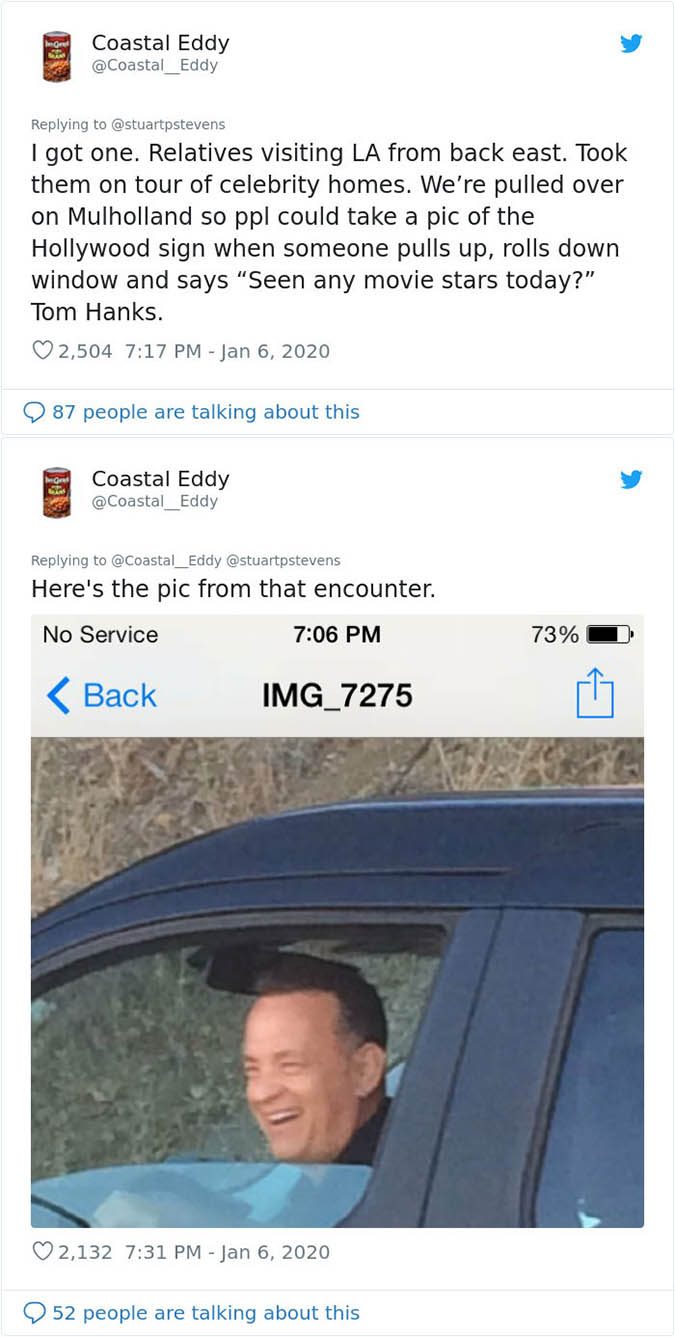 Throughout his career, Tom has starred in at least 82 films.  And you’ve probably seen most of them, at some point in your life. Hanks’s films are so popular that they’ve grossed more than $9.96 billion worldwide, making him the fifth-highest-grossing actor in North America!  Plus, Hanks is the one of the only two actors to win the Best Actor Oscar consecutively alongside Spencer Tracy. He won his first Best Actor Oscar in 1993 for his role in Philadelphia then again in 1994 for portraying Forrest Gump. What’s your favorite Tom Hanks film?

“Shook hands with Tom Hanks IN the Astronaut suit.” 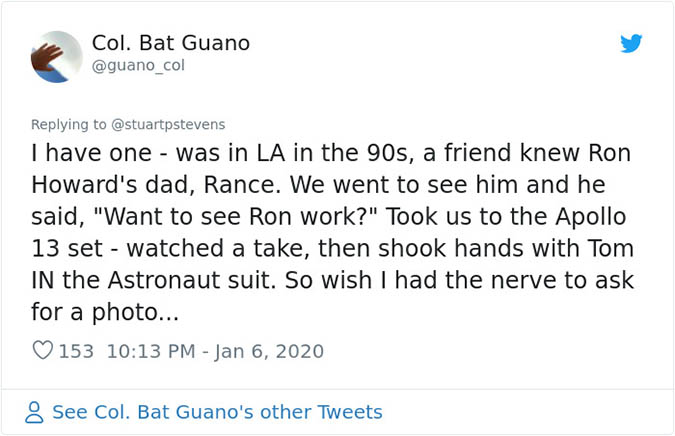 Oh, and did you know that Tom’s got an asteroid named after him? The “12818 Tomhanks”, an asteroid that orbits the Sun, was named after the actor whose childhood dream was to be an Astronaut! This happened in 1996, in honor of his performance in Apollo 13.

“Tom looked me in the eyes and asked me how I was doing.” 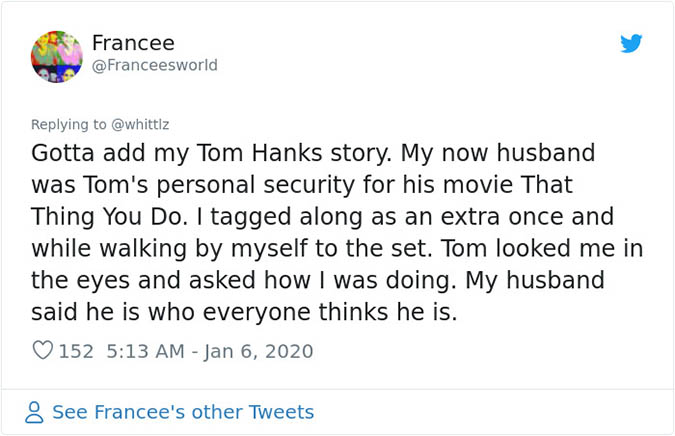 Tom had more questions for this starstruck fan 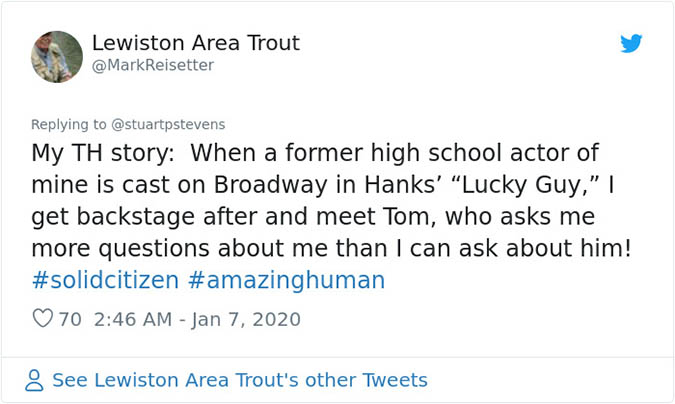 He reportedly wrote ‘thank you’ notes to Pittsburgh’s crew 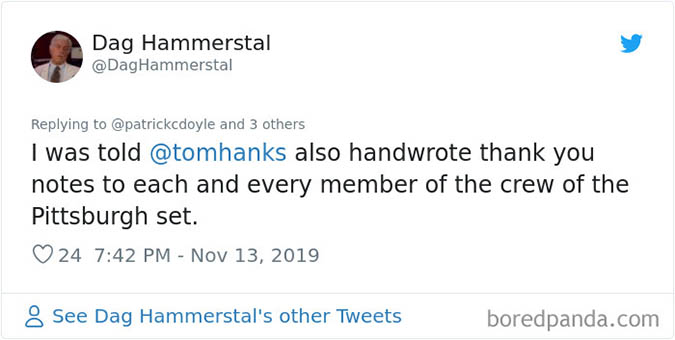 Tom gave everyone a box of popcorn at a game 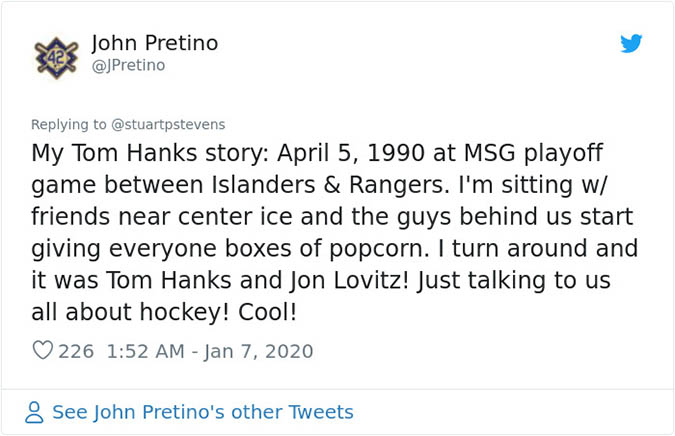 “I left my iPhone unattended in the same room as Tom Hanks. The next day, I found this photo in my camera roll.” 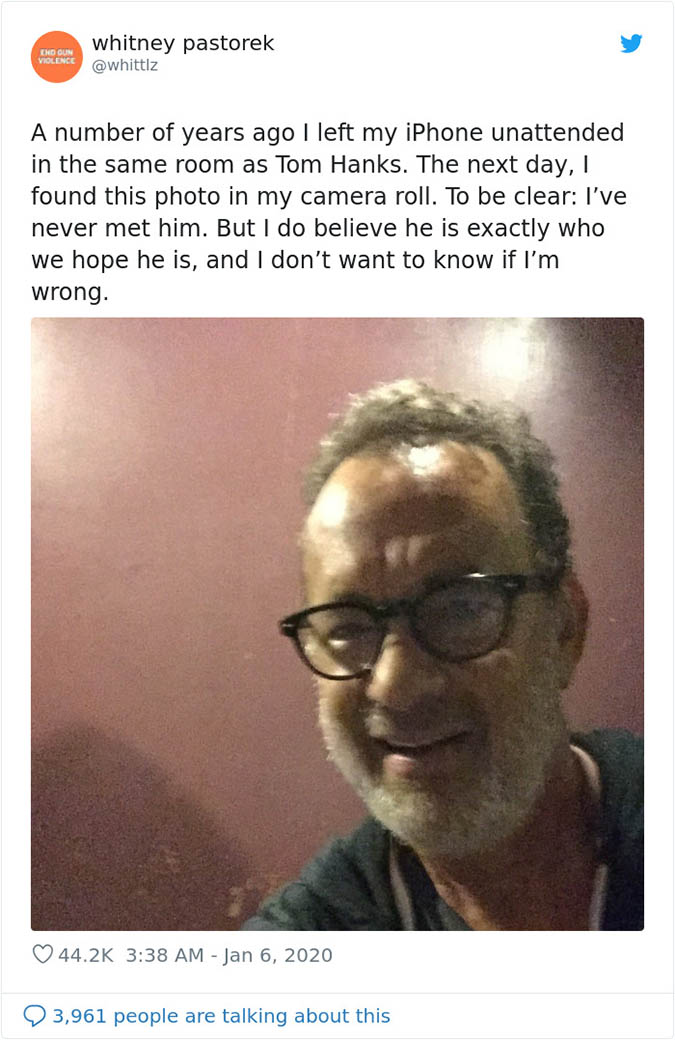 “Tom makes introductions and includes me in the conversation.” 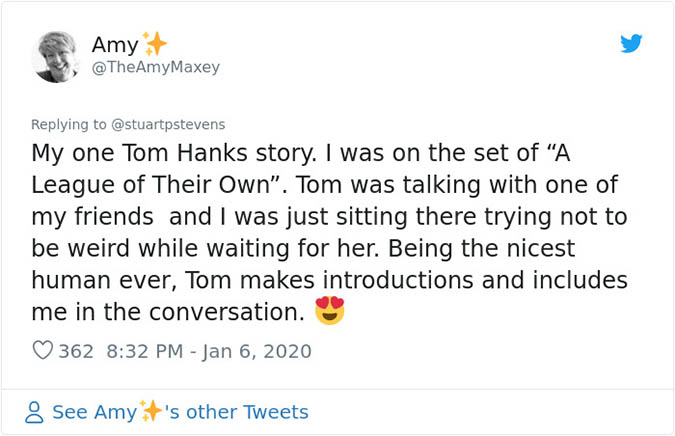 “Hanks stopped filming to escort them to the altar.” 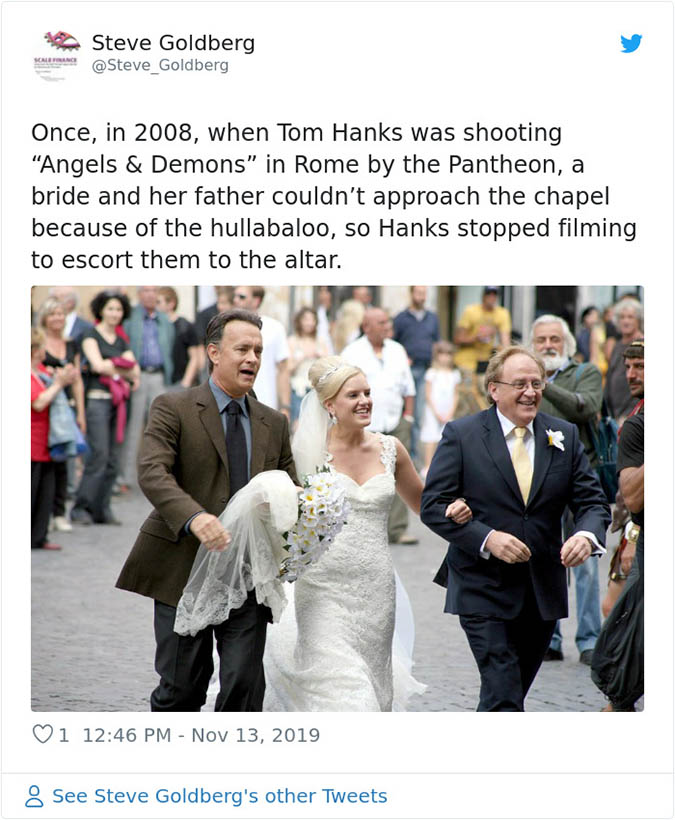 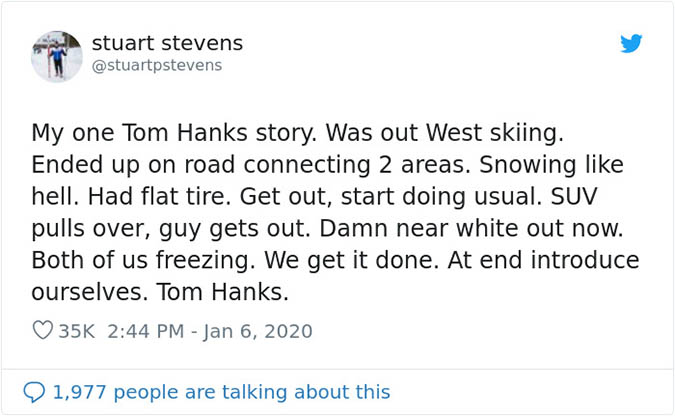 “Tom Hanks donated a fancy espresso machine to our office” 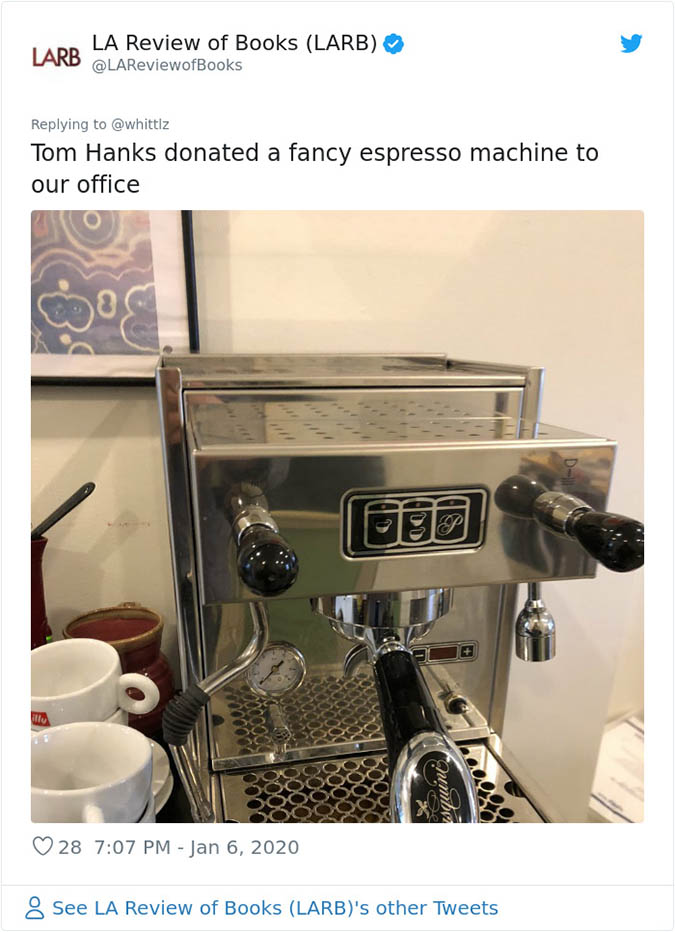 LA Review of Books isn’t the only office to receive a coffee-related gift from the actor. In 2004, while touring the White House, Tom saw that the press corps office didn’t have a coffee pot, so he donated an espresso machine. He sent newer models to the office in 2010 and again in 2017.  What can we say? He knows how important coffee is to people of the press!

“He is absolutely a good human.” 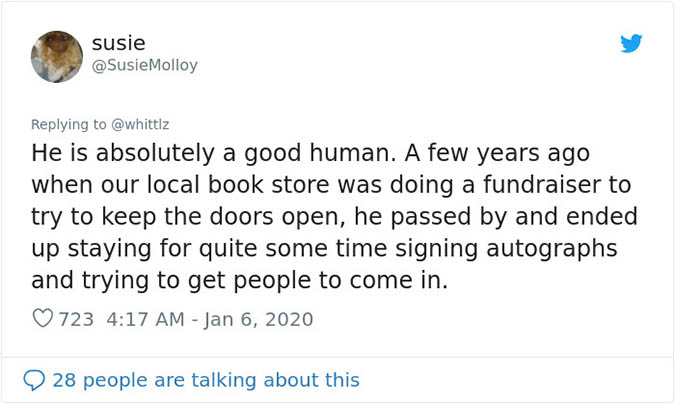 “He’s stayed in touch with that group for decades.” 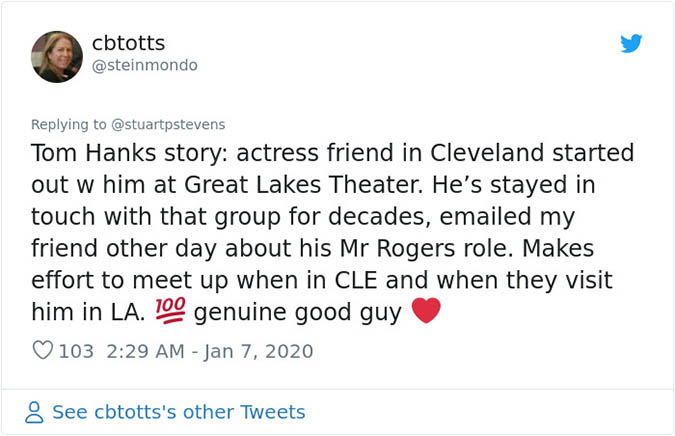 Tom isn’t the first famous person in his family. In fact, Hanks’ family is related to not one, but three previous presidents of the United States! Tom is actually Abraham Lincoln’s third cousin, four times removed. Furthermore, it’s been traced that he’s also Herbert Hoover’s 19th cousin, once removed, and Franklin D. Roosevelt’s 15th cousin, thrice removed. Perhaps it’s because of this, that the celebrated thespian doesn’t shy away from political discourse. He’s supportive of same-sex marriage, environmental causes, and alternative fuels. 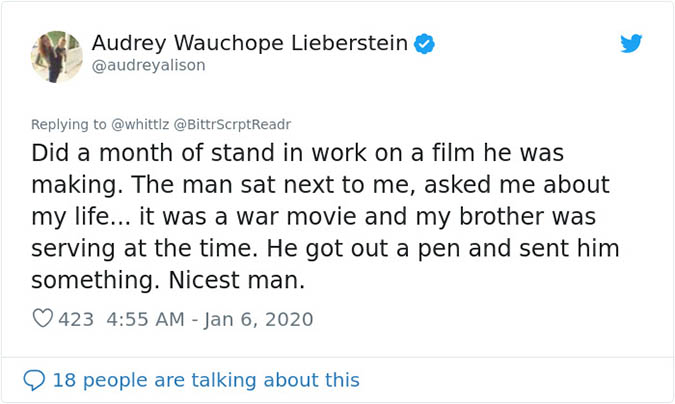 This fan received a typewritten letter from Hanks 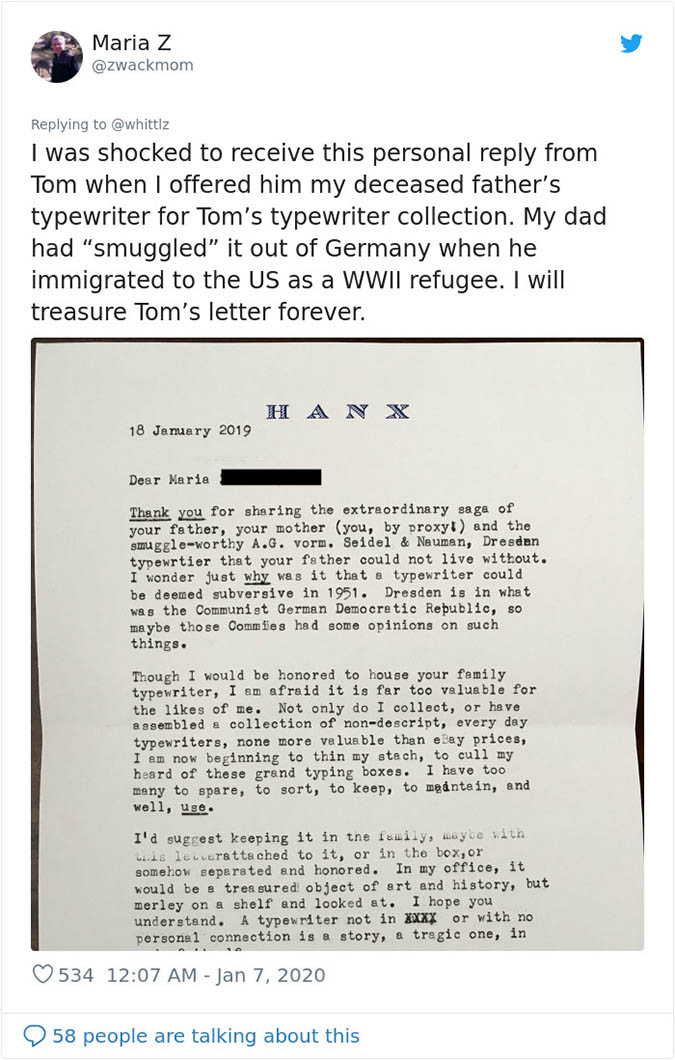 Tom loves typewriters. He loves them so much that he’s got more than 250 of them in his collection. And as you can see in the photo above, he doesn’t let his typewriters gather dust in a shelf. Instead, he uses them to write letters and thank-you letters almost every day! Wonder if he’s got the music sheet typewriter too?

“One of the nicest customers I had the pleasure to serve.” 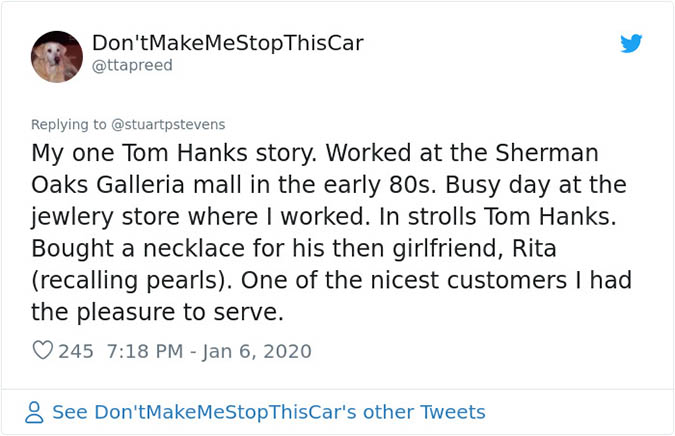 He didn’t discriminate on this then-writer’s equipment 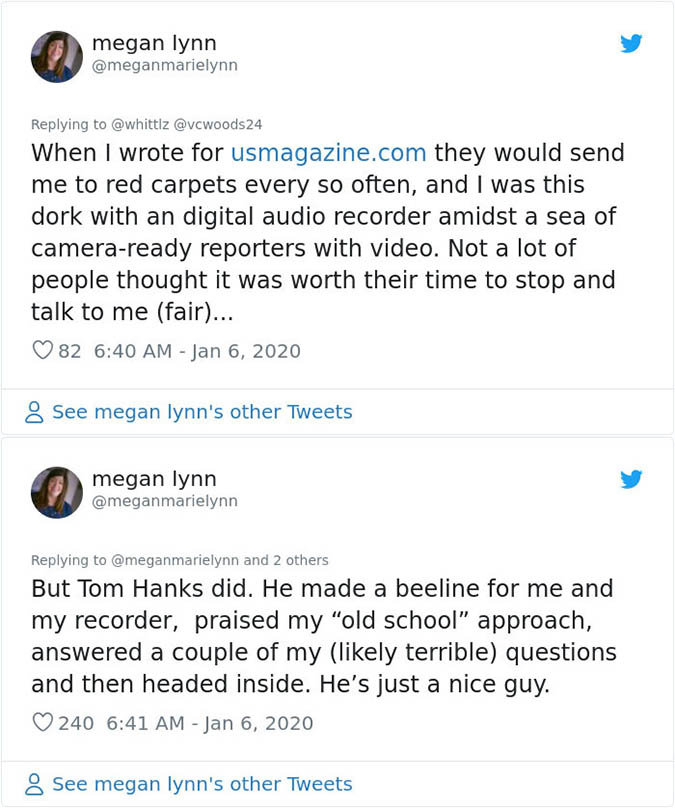 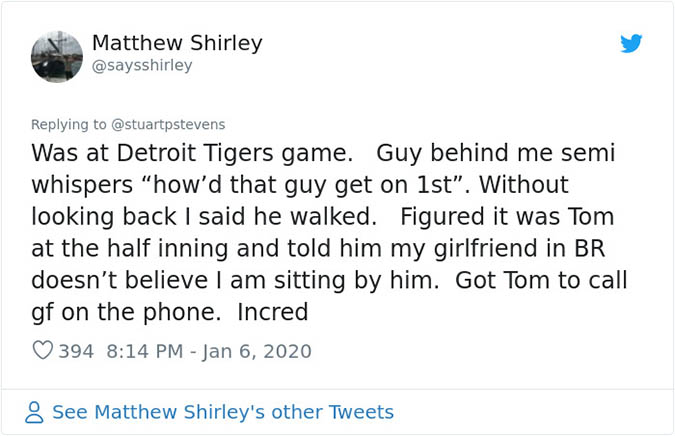