Most bookworms aspire to build a library as impressive as like the one shown in the animated film, Beauty and the Beast. But any collection’s worth can’t really be measured by its volume alone. In fact, more often than not, book collections tend to be incredibly intimate. And bookshelf inserts are helping amplify any collection’s whimsical (or thought provoking) charm. This new decorative trend is literally bringing bibliophile’s magical worlds to life. They may be small, but they’re definitely hard to miss!

Japanese artist Monde started it all when he debuted his back street dioramas at Design Fiesta 2018. The event is an annual international art event in Tokyo. His hyper realistic depiction of Japanese backstreets totally won the crowd that year. After all, books don’t always have the same thickness, and can leave out a gaping space in the shelf. Monde’s bookshelf inserts are definitely a great way to fill in th void. And the reason behind his amazing work?

“I thought it would be interesting if I made a back street in the gap between bookshelves.”

Since debuting his designs, Monde has definitely become pretty popular. His tweet about the bookshelf inserts have gained over 181K likes and have been retweeted over 73.4k times! His miniature back alleys have gone on several other exhibits since their debut as well. Crafty bibliophiles have taken inspiration from Monde’s concept as well, and have since created their own. But if you want an original bookshelf insert made by the trend’s pioneer himself, you can try luck by sending him a direct message via Twitter.

His dioramas are impressively detailed

Creative book lovers are making their own bookshelf inserts

It didn’t take long for crafty bookworms to take Monde’s concept and make it something that’s entirely their own. In fact, they’ve even converged over at Reddit to show off and talk about their new favorite craft project! Some have recreated iconic locations from their favorite books, like Diagon Alley from the Harry Potter universe, and an alley inspired by Blade Runner. We’ve compiled 33 of the most beguiling book nooks from the subreddit. Check them out below:

“This book nook my mother got on eBay” 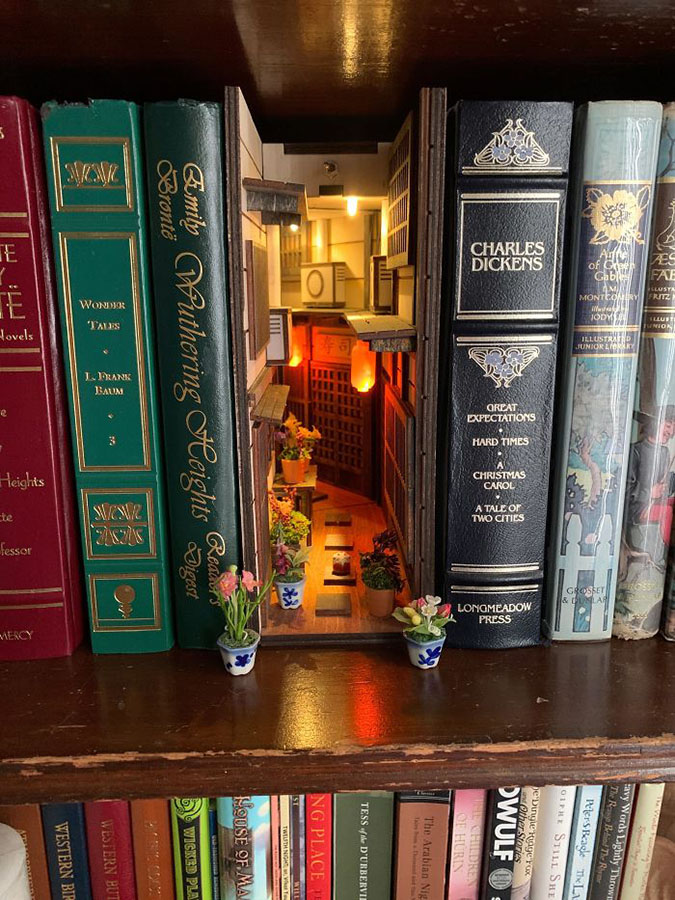 “A magical bookshop in your own bookcase” 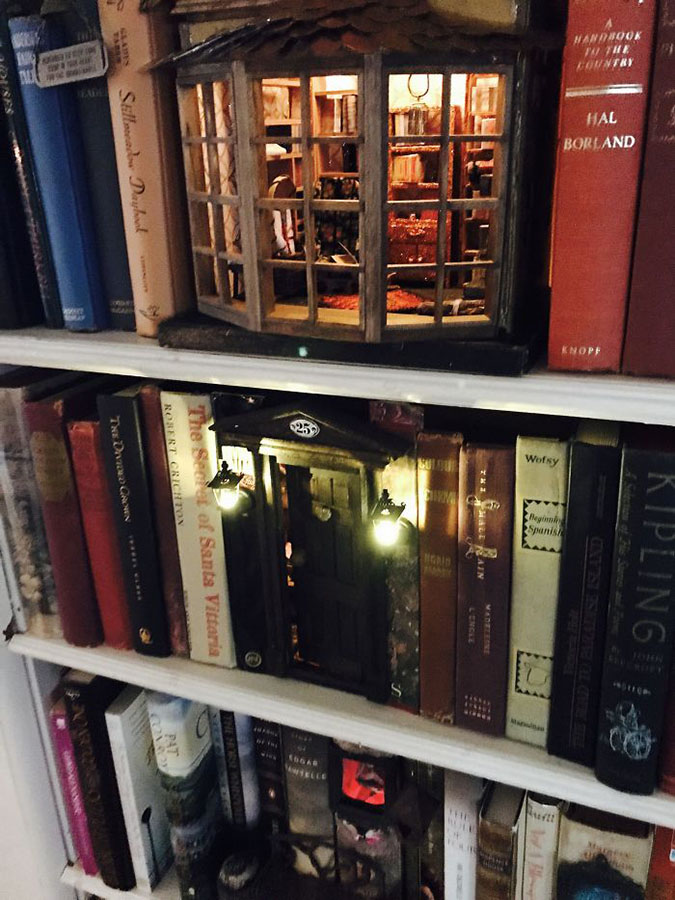 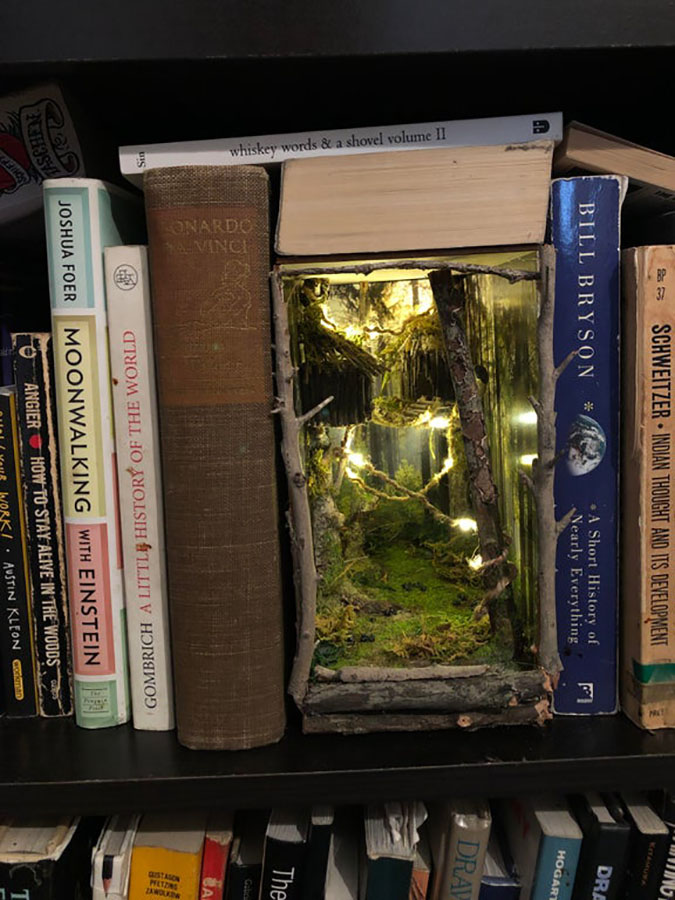 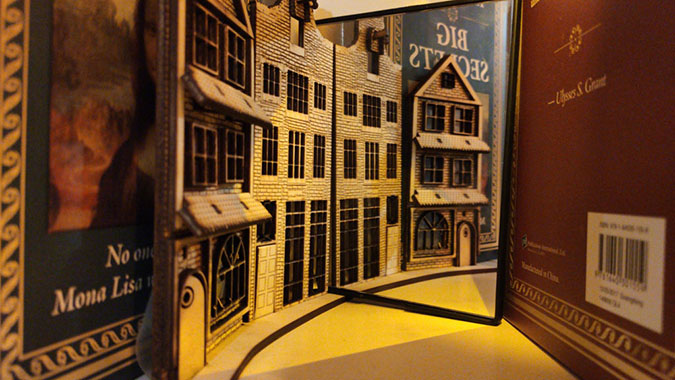 Others preferred to keep it simple 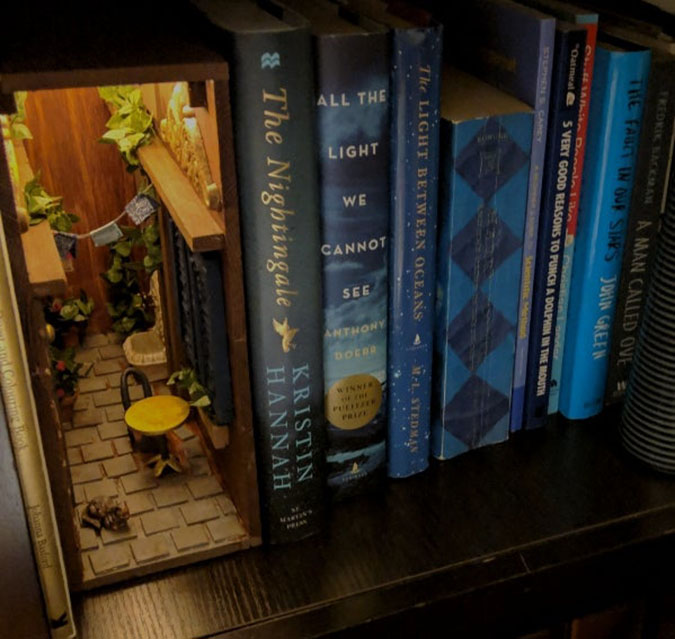 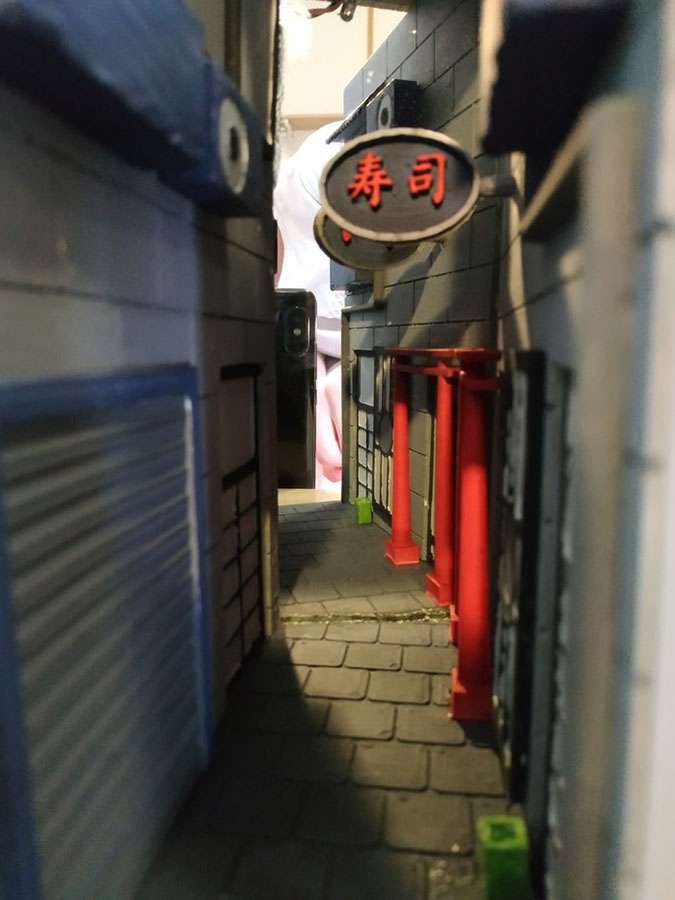 “Made a book nook inspired by Les Miserables” 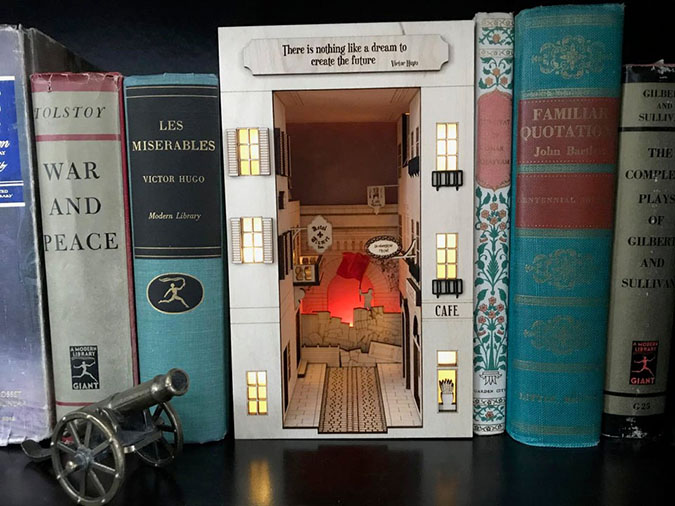 Others took a more fantastical approach for their inserts

“Made a booknook based on opensource model” 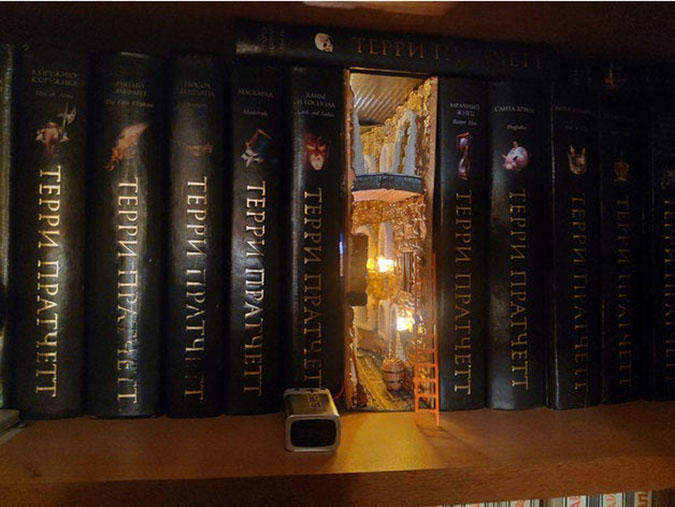 Naturally, Potterheads’ bookshelves have their own inserts 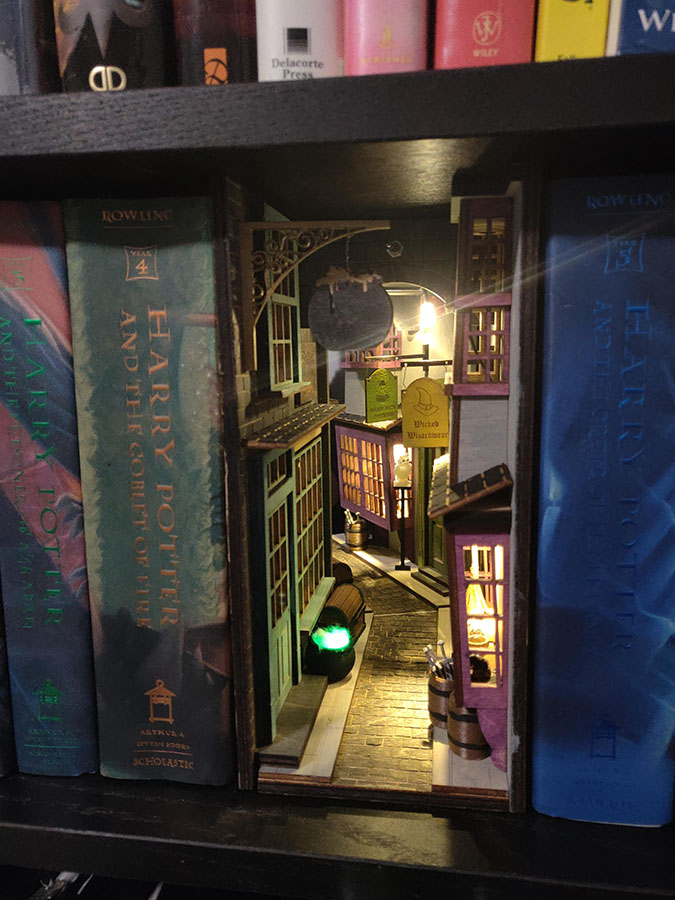 “I was told this sub m[a]y like this Christmas present I’ve made for my siblings: Diagon Alley!” 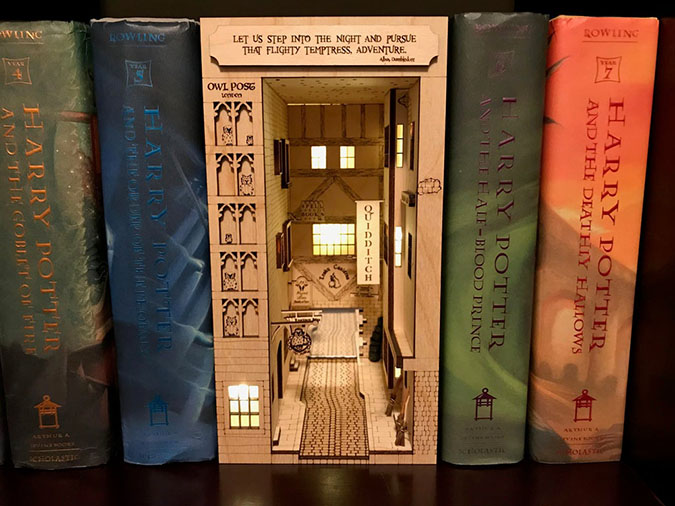 On the other hand, this artist prefers to make bookshelves interesting by making inserts inspired by creepy characters

While most book nooks are inspired by places, this artist is making waves on Instagram with his wonderfully ghoulish bookshelf inserts.  He creates custom, extremely detailed inserts that look like they’re peaking at you from between your books. Hundreds of people have inquired how they can buy one, but Taggart is yet to officially announce how and where his works are sold. These inserts will definitely shock your unwitting guests! Plus, it can be used as decor for Halloween – talk about dual purpose, right?

“There’s a Bog Witch living in my bookshelf…” 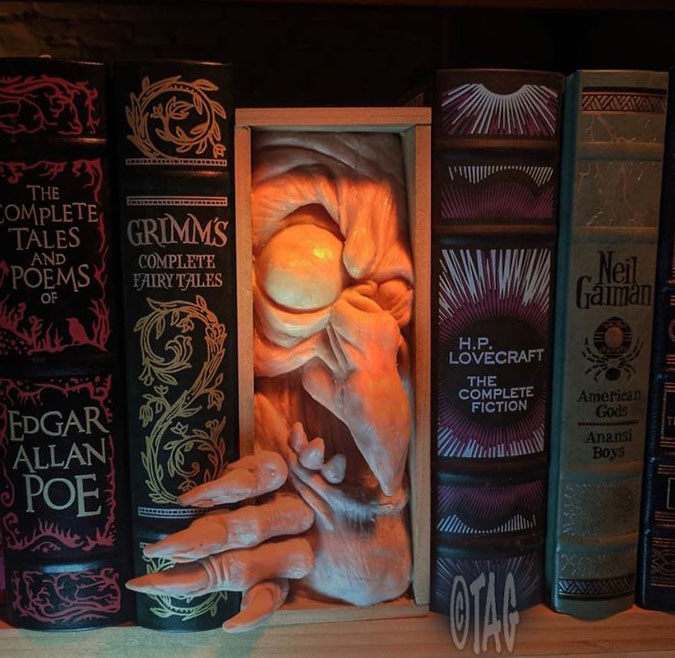 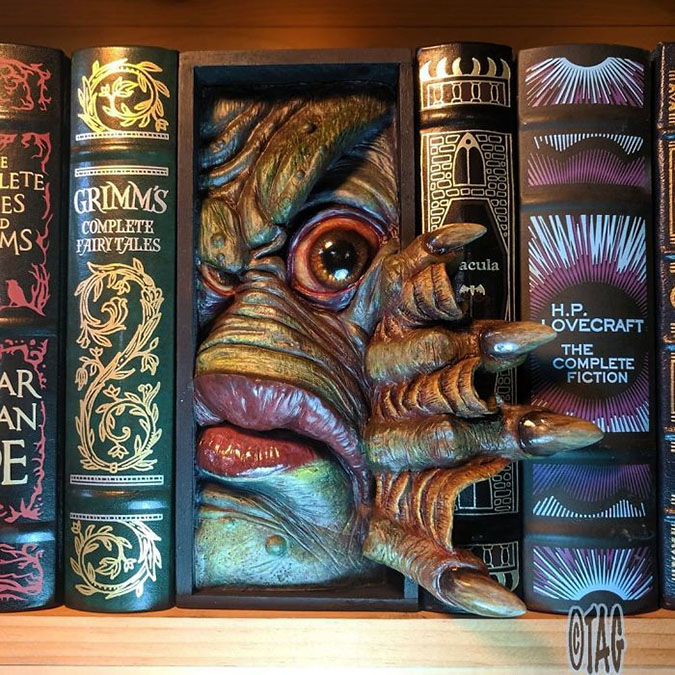 “An American Werewolf in my bookshelf!” 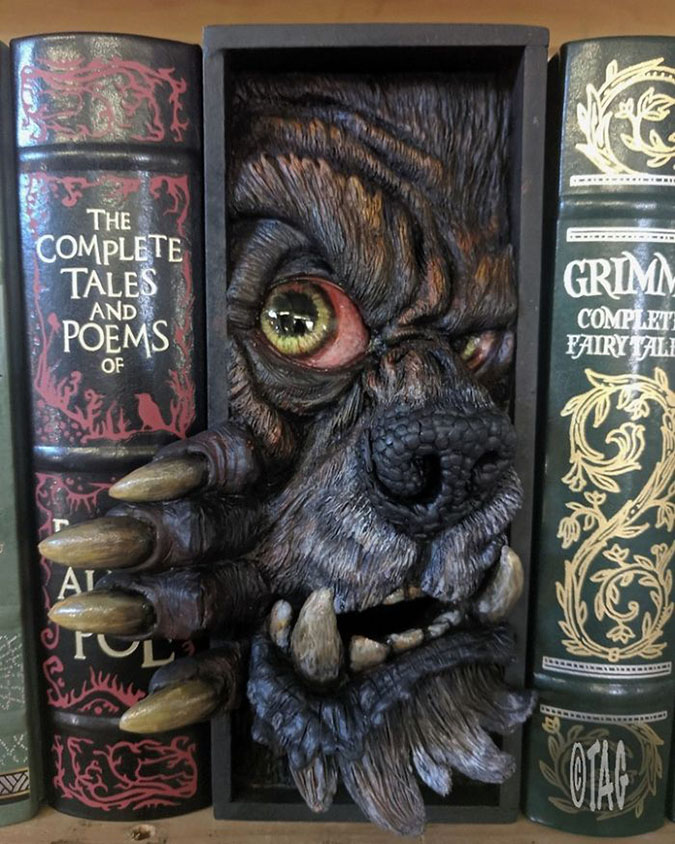 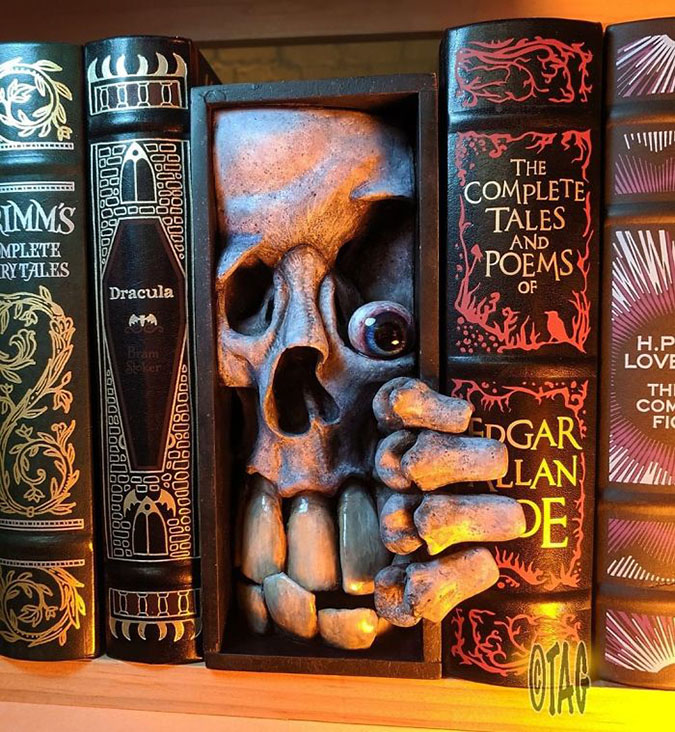 Take a tour of some more awesome bookshelf inserts below

I made a booknook for a Christmas gift, my inspiration was Blade Runner. It’s larger than ones we have see, it’s 11″ x 6″. from r/booknooks

Design, print and paint a small shelf to decorate shelves. from r/3Dprinting

My first attempt!… from r/booknooks

[OC] Dare you enter the Doors of Durin and face the long Dark of Moria? from r/DnD

A fabulous booknook from r/booknooks

My updated booknook. from r/booknooks

I designed and printed my own Book Nook inspired by u/Alpha-Lyr’s design. Thingiverse link to .stl in the comments. from r/3Dprinting

Another booknook by Peter Söderlund from r/guidebooknook