Home » Architecture & Design » Why is the Creature from ‘Alien’ on a 12th century Abbey?

Why is the Creature from ‘Alien’ on a 12th century Abbey?

Do aliens really exist? If you’ve watched the 1979 sci-fi horror film Alien you probably wish aliens would never exist. The alien predator in the movie is indeed an incarnation of our most dreadful nightmare. We’ve got to admit that this Ridley Scott’s classic thriller did a great job in depicting a horrifying species. Due to its grotesque and fearsome appearance, the character itself was made into a gargoyle. And you can find the Alien gargoyle in a 12th century abbey in Paisley, the second largest town in Scotland.

An Alien gargoyle on a 12th century abbey. Wait, what? So, if the alien predator was debuted in 1979, how did it end up in a 12th century abbey? This fact itself is mind-boggling but we’ll explain to you how this exactly happens. But first, let’s take a look at the place and see why you should include this historic town in your destination list. 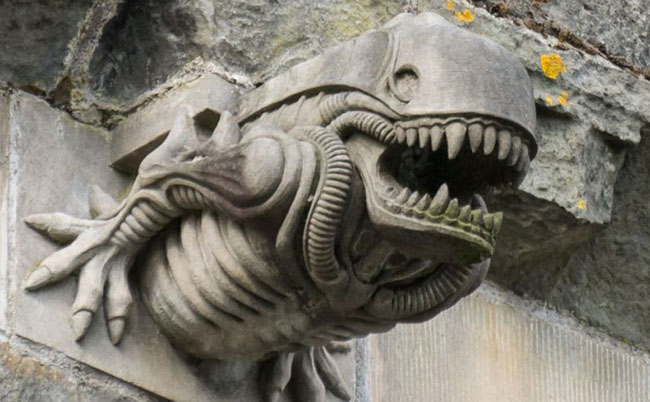 Paisley is a town in the west central lowlands of Scotland and is the fifth largest settlement in the country. It doesn’t have city status yet but this notable town doesn’t fall short when it comes to attractions. The town’s landmarks clearly represent its rich and colorful history. As a matter of fact, the paisley fabric pattern originated from this place. During the late 18th and early 19th century, the town became Scotland’s center of textile production. Hence, the paisley pattern was an original creation of the people of Paisley.

Aside from its contribution in the textile industry, Paisley is also the home of several historic sites. But probably the most intriguing of these attractions is the Paisley Abbey that dates back from the 12th century. After the Reformation in the 16th century, the abbey serves as a Church of Scotland parish kirk. So, what makes this abbey unique from other ancient abbeys? This 12th century abbey caught the attention of the public when they noticed that one of its gargoyles looks familiar. Surprisingly, this gargoyle features a very striking resemblance to the Alien character. 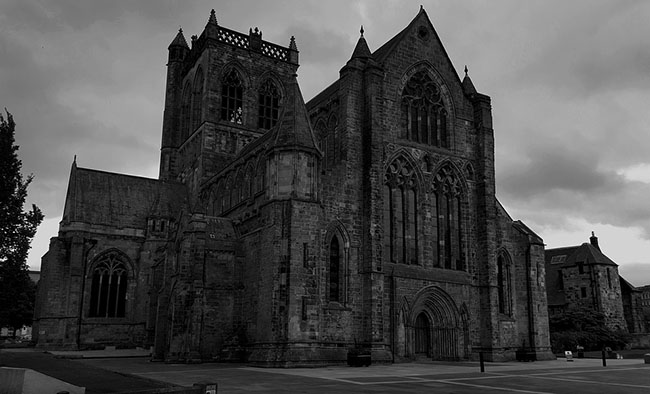 The Case of the Alien Gargoyle

BBC cited how the gargoyle caused a social media sensation in 2013 due to its resemblance to the Alien monster. Glasgow Live also cites that the gargoyles in the Paisley Abbey date back from 12th century. These grotesque carvings function as downpipes that convey water from the roof through their spouts. This prevents rainwater from running down the walls because downpipes do not exist just yet during this time. Moreover, these monster-figures also serve as guardians who protect the church from evil spirits. Now, the question rises. Did the infamous Alien predator already exist in the 12th century? How can we explain the Alien gargoyle?

Reverend Alan Birss, the minister of Paisley Abbey, explains that 11 out of the 12 gargoyles are in really bad condition. True enough, these gargoyles have been there for centuries enduring the damages by harsh weather conditions. Of course, nothing lasts forever and even these mighty figures will eventually deteriorate in time. Restoration of the 11 gargoyles took place in 1991 and this is when the original carvings (except one) were replaced. Since then, the Alien gargoyle has been sitting above the arch doorway of the abbey. 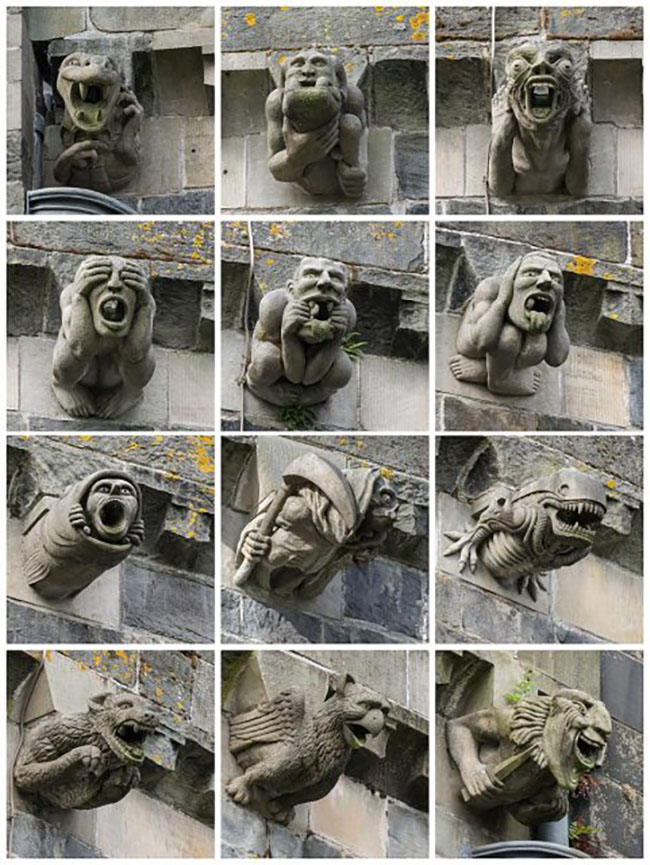 It is also important to point out that the abbey is a religious church. Obviously, placing a sci-fi character in a religious site doesn’t seem to make any sense. Reverend Birss explains that they have to hire stonemasons to remodel the gargoyles. The minister also explains that no two gargoyles should look the same and each should be unique. In order to stick to the tradition, the stonemasons were instructed not to copy the original figures. And that they have to come up with their own creations. Apparently, one of the stonemasons was a huge fan of Alien and he decided on making this figure instead. So when asked about the Alien gargoyle, Reverend Birss would reply, “I think it was a stonemason having a bit of fun” 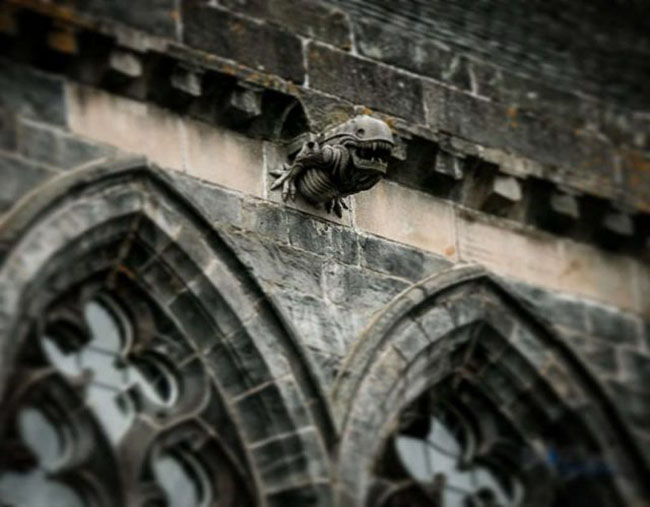 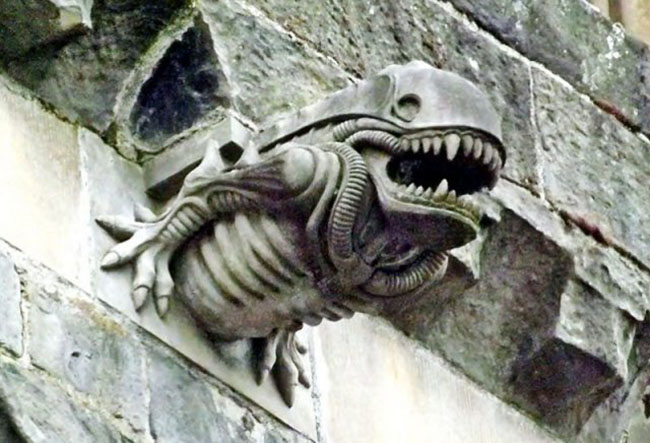 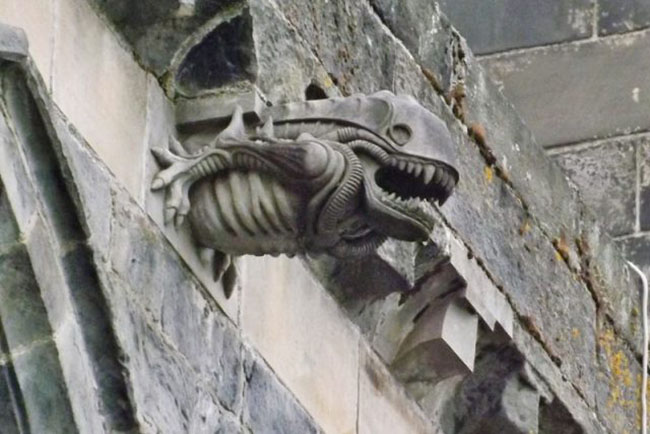 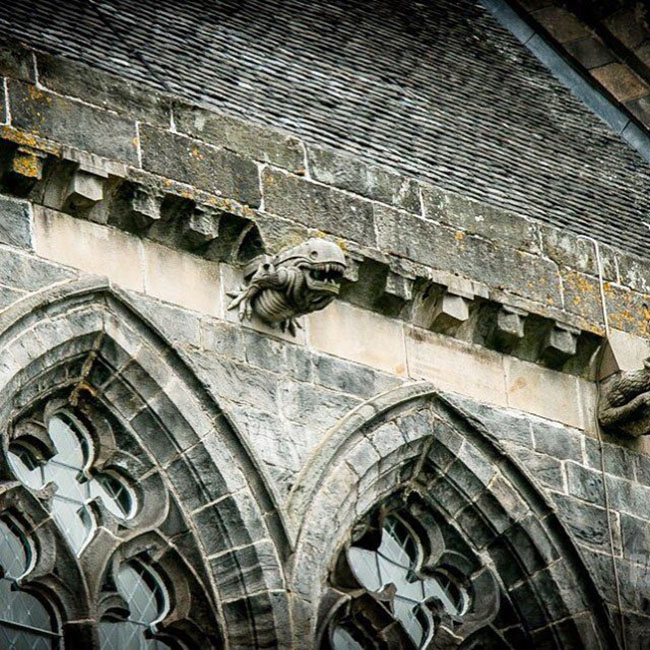 The emergence of the Alien predator in Paisley Abbey in 1991 wasn’t actually a big deal, but not until 2013.  During those times when social media do not yet exist, little has been known about the peculiar figure in Paisley Abbey. However, the year 2013 would be totally different. Social media has become the norm and every interesting photo would circulate on the internet at amazing speeds. That’s why when photos of the Alien gargoyle made its way to social media, it instantly became a hot topic. As a result, the abbey is receiving more visitors each year and is a frequent part of tourists’ destination list. As you would expect, hardcore Alien fans would not miss the chance of seeing this attraction up-close.

However, not all people are happy with it. Other people find the carving inappropriate and disrespectful to the Christian values. Furthermore, these people elucidate that these figures should serve as symbols of reverence and not a reference to some movies. Well, there are always two sides of a coin and there’s no way to please everyone. But nonetheless, Paisley Abbey is undoubtedly taking the spotlight due to this particular Alien gargoyle.