We could all probably agree that Kellogg’s offers some of the tastiest breakfast treats in the world. From cereals, crackers, toaster pastries and frozen waffles, Kellogg’s never fails to come up with flavors that are simply mouthwatering. And speaking of toaster pastries, Kellogg’s Pumpkin Pie Pop-Tarts are finally back on shelves! So, you can satisfy your Thanksgiving dessert cravings as early as now!

It may come as a surprise to many, but this Thanksgiving-inspired pastry has been around since 2010. Apparently, Kellogg’s has jumped on the pumpkin trend long before it blew up. And since it’s been making a comeback almost every year, it’s only safe to say that people must have loved it. So, if you still haven’t tried it after all these years, then now’s your chance to do so. 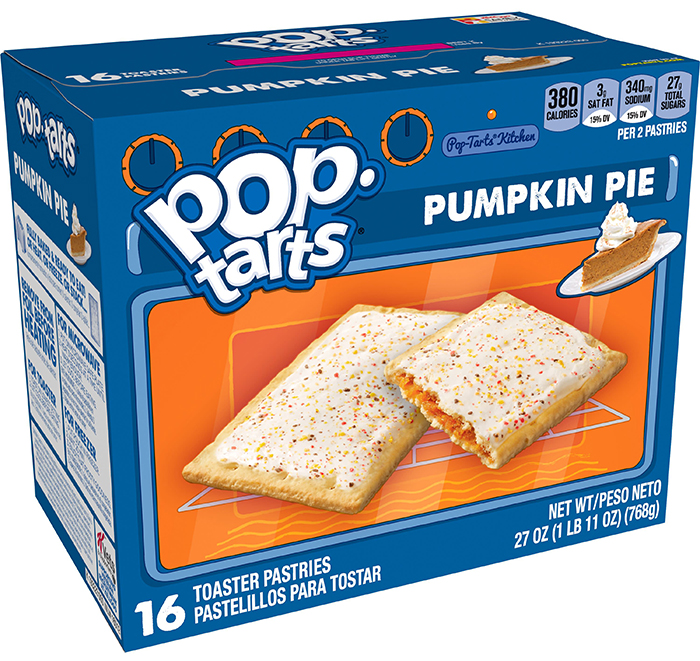 These toaster pastries feature a tasty golden crust with a rich pumpkin pie-flavored filling inside. On the outside, they’re topped with a sweet frosting that’s dusted with specks of brown, orange and yellow sprinkles. Evidently, they make it so much more convenient to enjoy the classic fall pie.

They’re fully baked and ready to eat, making them an excellent dessert or snack option for those who are on-the-go. You may also pop them in the microwave or toaster and serve them a la mode. But if you prefer something frosty, then feel free to pop them into the freezer for about 20 minutes. The possibilities are totally endless.

Unlike the previous years, this year’s edition comes in much simpler packaging—almost identical to the regular flavors. So, be sure to look for the ones with orange details when you go through these blue boxes! A few snack reviewers have already spotted these treats in boxes of 12 at their local Target stores.

I guess #fall is here now. It’s not even Labor Day yet, but pumpkin stuff is hitting shelves. So get on your UGGs and faux fur vests and let’s get crazy. PSL season is arriving. . . . #pumpkin #psl #pupmkinspice #dadbod #dadbodsnacks #poptarts #? #pumpkinpie #mmm #basic #omg #yas #yummy #whitegurl #ootd #explorepage

My body? It’s ready. Give me all the PUMPKIN. ?

They also come in boxes of 16 which you can order online from Walmart for only $3.68. We’d suggest stocking up as early as now before the pumpkin craze kicks off once again!