Going into surgery is always a scary event for anyone, especially children. But Dr. Robert Parry has managed to dispel his young patients’ post-operation stress through a rather creative method. So, to help his patients recover better, Akron Children’s Hospital’s director of pediatric surgery takes out his colored pens and draws amusing cartoons over their post-op scars.

Parry has been with the hospital since 2011. And according to the hospital profile, he’s reached the 10,000 surgery mark in 2017. We’re pretty sure that the figure’s gone up since, given his patients’ glowing reviews about his post-op care method. He’s also been voted by his peers as one of The Best Doctors in America since 2015 and he still keeps the title to this day. It’s a pretty well deserved accolade for someone who goes the extra mile to make sure his patients have a stress-free recovery, right?

Christina Potts Whipkey’s daughter is one of the thousands who’ve received Dr. Robert Parry’s endearing caricatures. Her daughter, Kennedy, was just 7 years old when she underwent surgery for a hernia. Understandably, the little girl and her parents felt distressed towards the procedure, but the doctor promised Kennedy something to look forward to instead.

“There is an incredible amount of stress any time a child is ill. When there is a surgical schedule, parents work hard to hide their fear of the procedure, the financial stress of the situation, and their terror of something going wrong.” 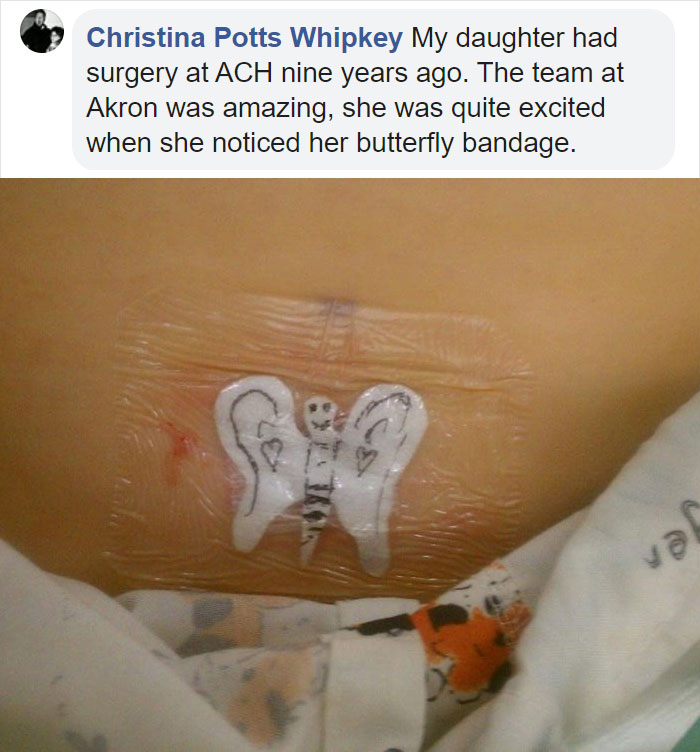 “The doctor told Kennedy and her siblings that she would have a lovely butterfly after she was done. When Kennedy came out, everyone was excited to see what the doctor meant. Kennedy was so proud of the pretty bandage and not concerned about any scars.”

After her procedure, Kennedy woke to find an adorable black and white butterfly on her bandage. The butterfly may appear to be crudely drawn to artists out there, but we’ve got to give Dr. Parry some slack. He taught himself to draw solely for the sake of helping alleviate post-op stress, after all!

The pediatric surgeon taught himself to draw

“It’s been a pretty special thing for everyone. It’s fun for me to do, the parents and the children really enjoy it and even the whole medical staff likes to get in on it,” Dr. Robert Parry said in interview.

“Whenever one of my kids arrive in the recovery room, the nurses all like to take a look to see what dressing the child got. I think it just makes everyone, me included, feel good.”

His imaginative post-op care solution was highlighted in the hospital’s Top 10 moments of the decade. In fact, his story came in third out of the hospital’s impressive 3,000+ memorable moments. According to the crafty doctor, it takes him about five minutes to make a personalized dressing for his patient. Per the doctor, Disney characters and sports team logos are the most popular requests that he gets from his ‘kids’. He also once got a pun-inspired request, for which he made a French salad ‘dressing’ bottle!

Another pleasantly surprised parent came forward to share her family’s experience with Parry as their doctor. Samantha Manning’s 11-month-old daughter Rose had been diagnosed with a liver disease. Rose needed a transplant, so they took her to Akron Children’s Hospital. Little did they know that not only would Robert save their baby’s life, he’d also give them something pleasant to remember it by. He drew a rose garden over Rose’s surgery wound, and the gesture simply melted Samantha’s heart.

“We had no idea ahead of time that this was Dr. Parry’s special trademark. We were really moved by it. The rose garden was symbolic of our larger experience with Dr. Parry and the hospital overall, taking the extra steps to do those small, little gestures. It shows how much they care and really lifted our spirits.” 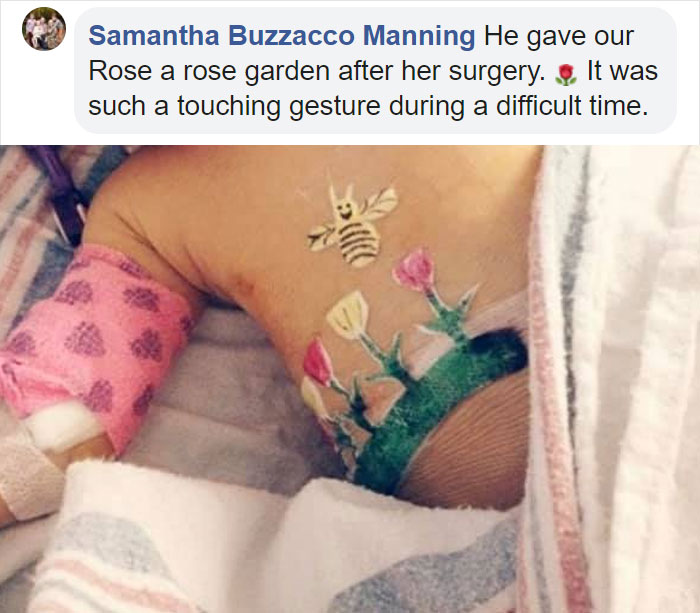 Taking a trip to the hospital isn’t exactly something most people look forward to. In fact, as a child, I threw fits whenever I saw doctors, so they had to take off their white coats so they can tend to me. In retrospect, those adjustments and Dr. Parry’s gesture simply shows the human side of medical professionals. All they really want is for their patients to be healthy and happy. And their way of dealing with their patients certainly leaves an impression that’s likely to be remembered forever. Shortly after Dr. Parry’s story went viral, more of his former patients came forward with their own memories. Check them out below: 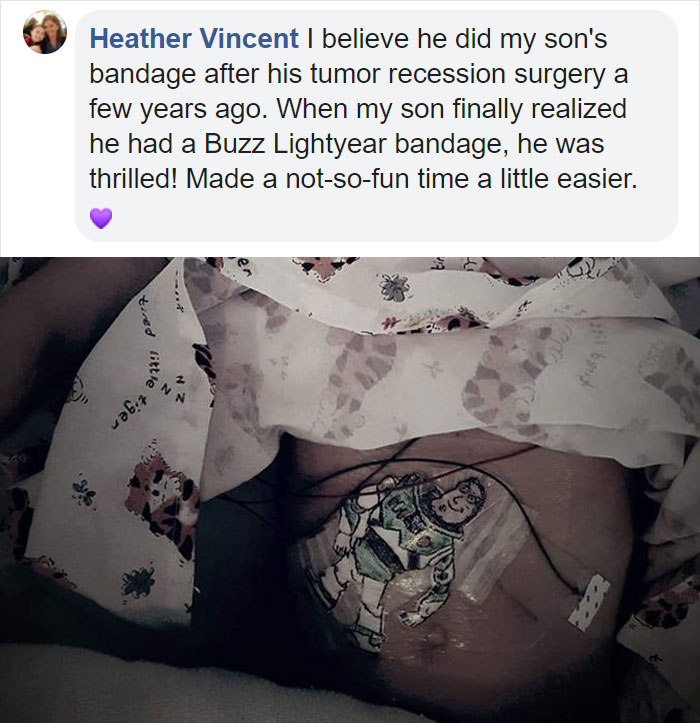 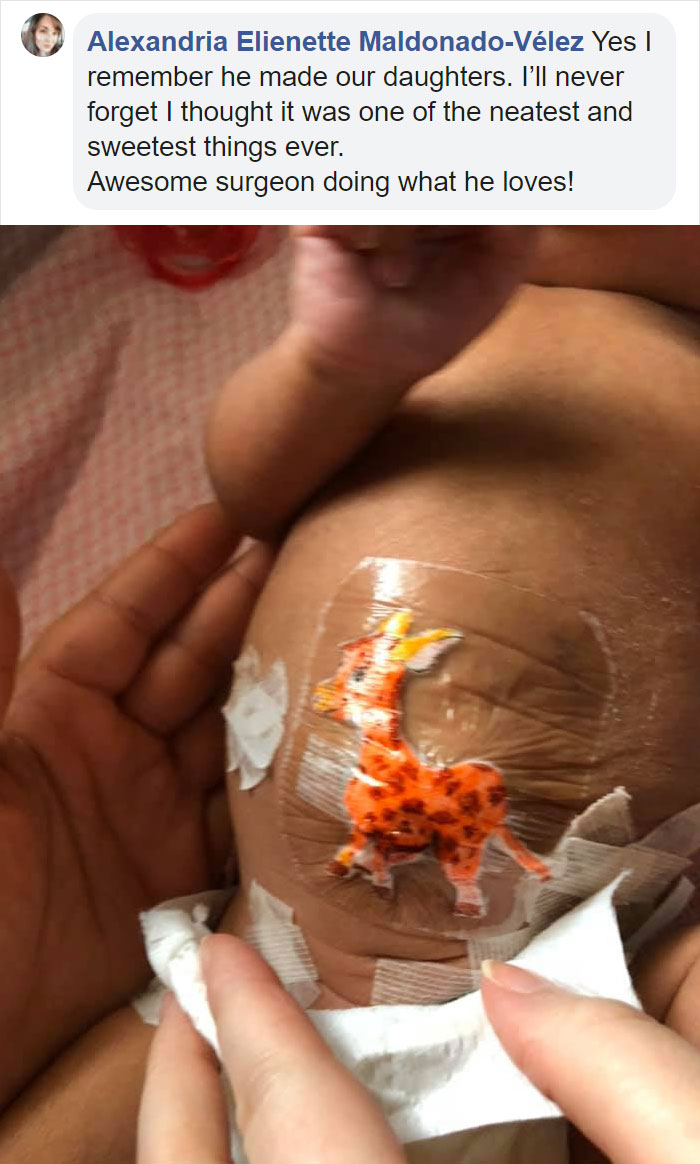 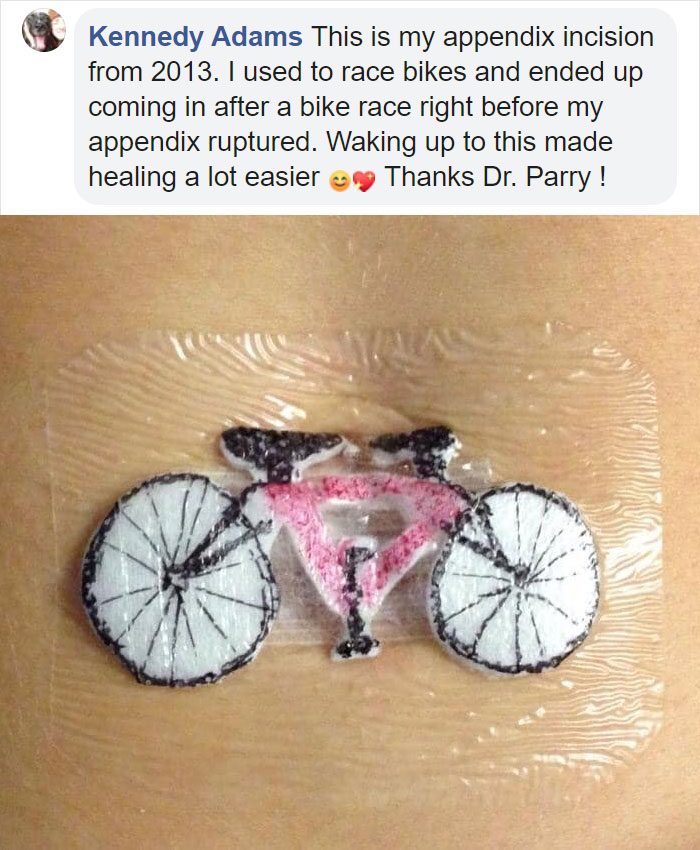 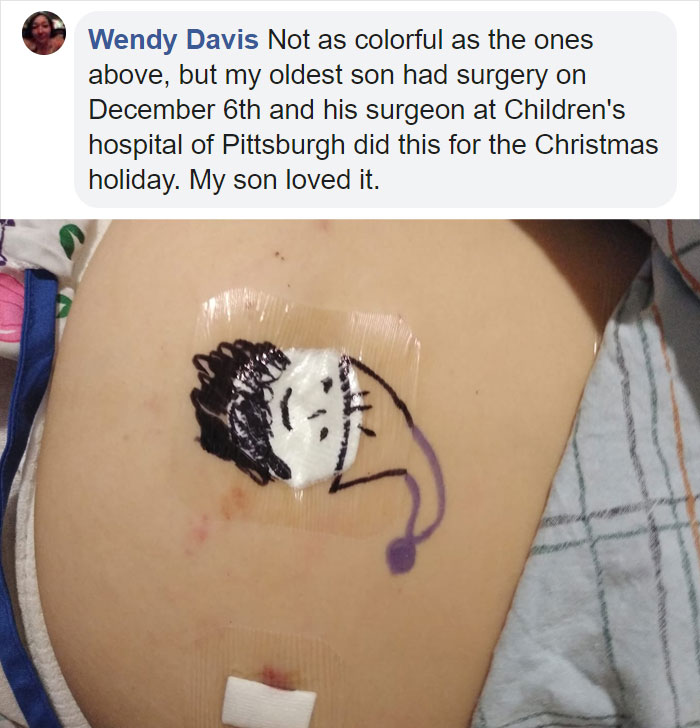