The temperatures are dropping, and and some of us just want to escape the cold. But going on a holiday trip to the tropics is pretty expensive. Thankfully, you can now have a taste of the tropics right in your breakfast bowl with the all new, limited edition Toasted Coconut Cheerios!

Cereal fans all over the internet went loco when some Instagram food blogs shared a photo of their cereal discovery. However, General Mills had not yet officially made an announcement about this cereal then. The cereal was first spotted by @fueledbymunchies however for the user has since taken down their post. Another user, @goodiewiththebeasts, quickly snapped another photo to confirm its existence.

In fact, the company chose to stay tight lipped about the new cereal until October 1st. When they finally broke their silence, General Mills announced that retail stores will be stocking the coconut-inspired cereal in November. And instead of spending thousands of dollars for a tropical getaway, you can just spend $2.99 to feel like you’re having breakfast by the beach!

The Toasted Coconut Cheerios comes in a bright blue box that reminds us of the waters of  tropical paradise. 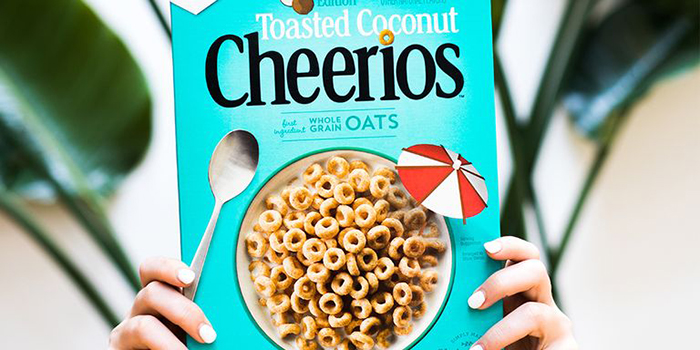 And just like the beloved classic Cheerios, the Toasted Coconut Cheerios list whole-grain oats its first ingredient. You’ll definitely get that tropical vibe because Cheerios used all natural coconut flavor, not some watered down alternative. We can already savor every nutty crunch!
While Cheerios has released many fruit flavored variants, we think that this coconut-flavored cereal takes the cake because of it literally sounds like a vacation in a bowl. Wonder if we could pair it with coconut milk…

The Toasted Coconut Cereal is gluten free, however, it “contains coconut ingredients”. So if you’re unfortunately allergic to coconuts, you’ll have to pass on this treat.

Take a tropical getaway with our newest flavor: Toasted Coconut Cheerios! ? This sweet, exotic variety will be rolling out in stores this season.

Ok ok ok!! I typically don't share others photos on my feed (I'll find what they showed me and then tag them for credit) but this.. THIS is a major announcement for coconut lovers like me! Thanks @fueledbymunchies for finding TOASTED COCONUT CHERRIOS! Holy yum!!!! @mccauleystare do you see this?!?! #Cereal #Cherrios #GeneralMills #Coconut #Ilysm #LimitedEdition #Breakfast #JunkFood #Candy #Foodography #Food #Instagram #Healthy #Foodstagram#FoodPhotography #Snacks #Eeeeeats #Sweets #Foodie #Candies #FoodPorn #Foodstagram #EastCoastFoodie #FoodieWithTheBeasts

A post shared by FoodieWithTheBeasts (@foodiewiththebeasts) on Sep 28, 2019 at 6:02am PDT

Yep, we’re definitely getting the tropical vibes that Cheerios is going for. We can already imagine diving into a pool (or a bowl) of flavor with these toasted coconut Cheerios. Each box can give you up to 11 bowlfuls of toasted coconut goodness (unless you tend to snack on cereals after breakfast!). Cheerios has definitely got us sold on the idea of having a piece of summer during the cold winter season. So don’t wait. Hurry over to your nearest grocery stores now to get your hands on the Toasted Coconut Cheerios! Our bowls are ready.