Tiffany Lamps And The Story Behind The Iconic Stained Glass Fixtures

Exquisite lamp shades with stained leaded glass are the trademark of the iconic handmade craftsmanship of Louis Comfort Tiffany. Since 1895, Tiffany Lamps have a strong worldwide appeal both for their function and ornate features. The value of these intricate lamps can be anywhere from $4,000 to over $1 million. For the record, a Tiffany lamp was sold for a hefty $2.8 million at an auction in 1997, making it the most expensive lamp in the world.

But what makes these lamps so expensive? It’s notable to point out that these lamps were not mass-produced or machine-manufactured. Rather, each piece was handcrafted by skilled artisans with each lamp featuring unique design. This makes every lamp a masterpiece that is like no other.

For more than a hundred years, Tiffany Lamps have brought light and colors into our world. Now it’s our turn to shed some light on its history and how the iconic lamp came to be. Born in 1848 in New York City, Louis Comfort Tiffany grew up in a business-oriented family that specializes in decorative art and design. His father, Charles Lewis Tiffany, was the founder of the world-class jewelry house Tiffany & Company. At a young age, he was fascinated by various disciplines of applying arts into craftsmanship. This influence sparked his interest in arts that he initially pursued a career in painting. However, he decided to shift focus into glassmaking after his visit to the Victoria and Albert Museum in London. There he saw a stunning collection of ancient Roman glass that inspired him to open a new path. 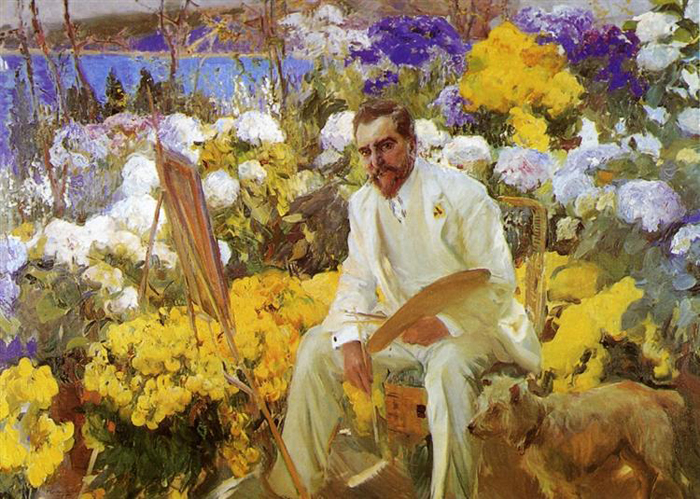 Due to his fascination towards artistic stained glass, he established an interior design firm in Queens, New York.  Along with a team of designers, they founded the Louis Comfort Tiffany and Associated American Artists. As a designer, Tiffany has created an astonishing collection of stained-glass windows that immediately gained international recognition. His prestigious clientele which includes aristocrats and prominent politicians grew even bigger. Due to the overwhelming success of his creations, he decided to establish his own glassmaking firm and named it Tiffany Glass and Decorating Company. 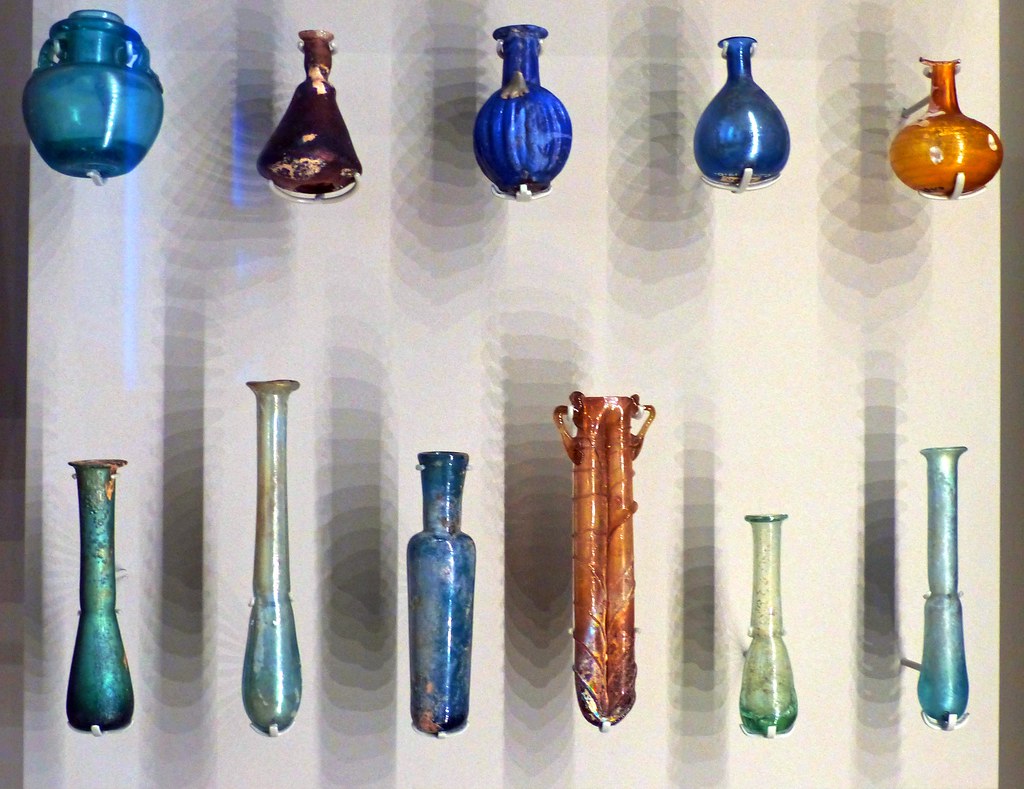 Louis Comfort Tiffany was 37 years old when he established the Tiffany Glass and Decorating Company. Although deeply inspired by ancient Roman glassworks, he started to experiment with the texture and tone of the stained glass. In order to create colorful pieces, he developed two new methods of glassmaking – the favrile glass and the copper foil technique.

In 1893, Tiffany exhibited his favrile glass at the Worlds Columbian Exposition in Chicago. The favrile glass differs from other irisdescent glasses because the colors are mixed in the glass itself. Tiffany’s favrile glass featured intricate design inspired by “the wings of certain American butterflies, the necks of pigeons and peacocks, the wing covers of various beetles.” The piece instantly gained popularity. So in the following year, Tiffany patented the process and began producing the favrile glass for manufacture in 1896. 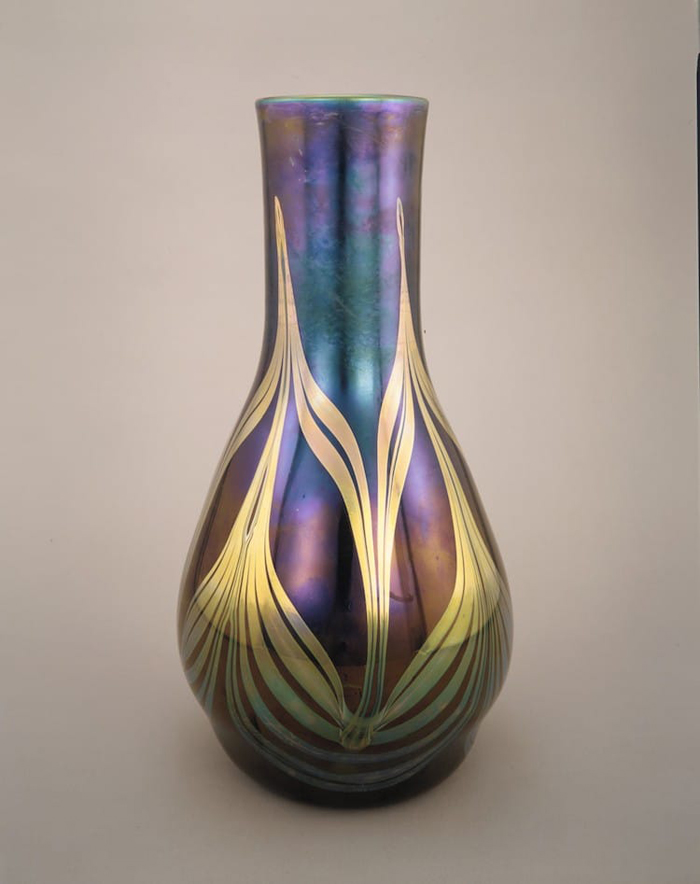 Aside from the favrile glass, Tiffany also developed the innovative ‘copper foil technique’. Traditional technique makes use of thick lead rods soldered at the joints of the stained glass to hold the pieces together. However, this method leaves conspicuous lines that would require the glassmaker to use paint just to cover the lines. In order to solve this, Tiffany used a thin, flexible foil to bond the pieces together. This new method didn’t only minimize the heavy lines but it also eliminated the use of paint, hence allowing the artisans to create elaborate details.

Tiffany Glass and Decorating Company had been specializing in designing and manufacturing stained glass windows. But these two methods opened another new path for Tiffany. Furthermore, this new path would later make Tiffany a household name.

The two new methods allowed the artisans to create stained glass in various forms and shapes. This is when Tiffany started focusing on stained glass lamps. He hired some of the finest artisans in the United States. Along with his team of 300 artisans, Tiffany began to realize his vision in producing aesthetic leaded glass lamps. In 1902, Tiffany Glass and Decorating Company changed its name to Tiffany Studio. More importantly, the firm became predominantly famous for its exquisite lampshades with intricate patterns and subtle tones that also feature stunning harmony of different colors. Since 1902, Tiffany Lamps are deemed as the finest (and the most expensive) lampshades in the world. It would later become a general name for any stained glass lamp even those that are not made by Tiffany Studio. 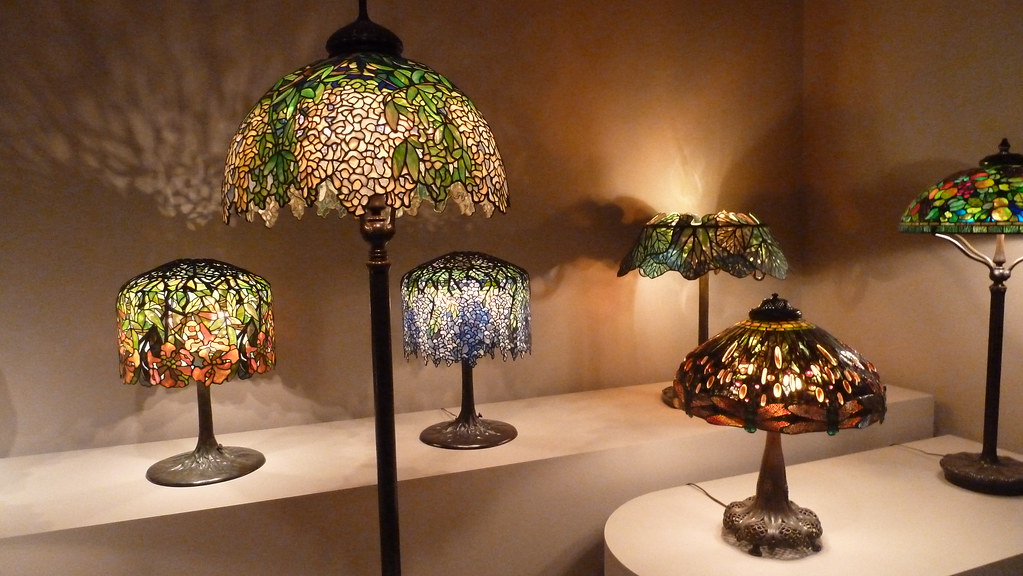 Tiffany Lamps are most notable for their colorful stained glass shade. But the base of the lamp also contributes to its overall aesthetic value. Some bases were made of plain bronze while others are embellished with enamels or mosaic patterns. 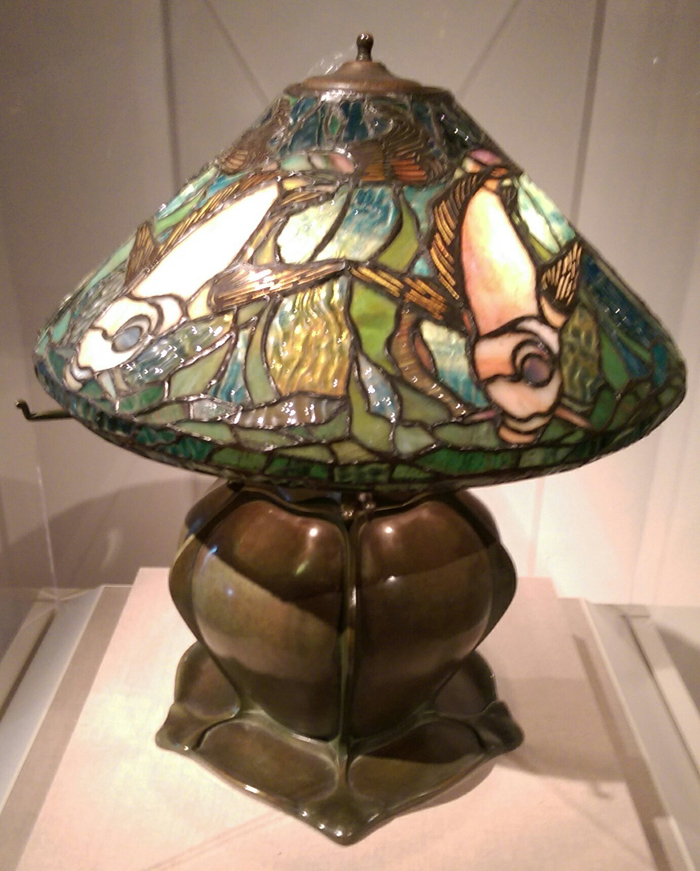 For more than a century, people have believed that Louis Comfort Tiffany himself designed all the Tiffany Lamps. But it turned out that he was not the only brain behind the iconic designs. Clara Driscoll, the head of Tiffany Studio’s Glass Cutting Department, was said to have designed more than 30 of Tiffany’s stained glass lamps. 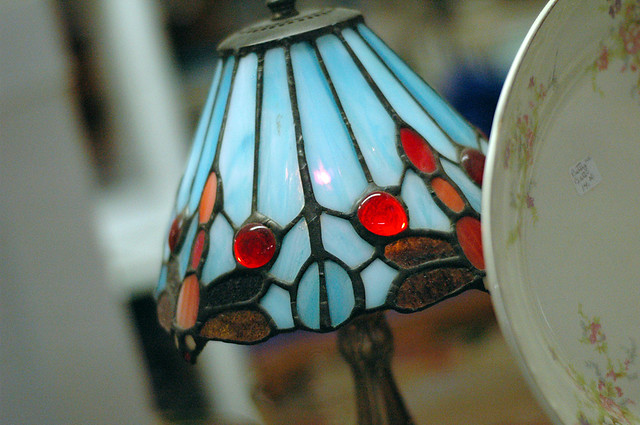 Tiffany’s leaded lamps flourished in the United States and other European countries such as Germany, Austria, and Hungary. In order to break into the French market, Tiffany partnered with Siegfried Bing, a Paris-based art dealer. But when the partnership ended, the lamps slowly fell out of fashion in Europe. This decline in interest adversely affected the popularity of the elegant stained glass lamps. And in 1913, Tiffany Studio announced to cease production of its signature stained glass lamps. 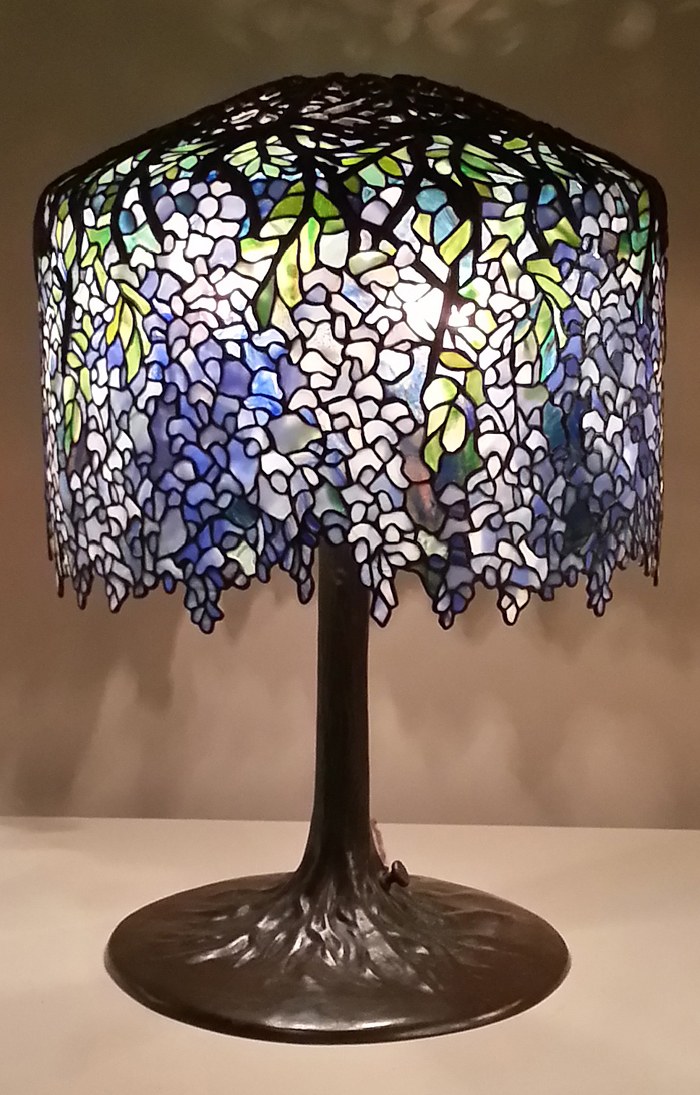 Today, these iconic leaded lamps are considered collector’s items with some pieces being sold at auctions at a very lavish price. Dr. Egon Neustadt, a Jewish orthodontist from Austria, has the biggest collection of Tiffany Lamps by collecting more than 200 pieces of it after they went on a decline. After his death, 132 pieces of his collection went to the New York Historical Society while the remaining pieces went to the Queens Museum of Art. The Virginia Museum of Fine Arts has 14 Tiffany Lamps on display and another 4 lamps in private collection. It is believed that some pieces are currently sitting on flea markets and antique shops. After its decline in 1913, some of the pieces were sold at a cheap price. But in the 1950s, the value of the lamps suddenly re-surged. Today, owning a piece of these sophisticated lamps would cost a fortune. 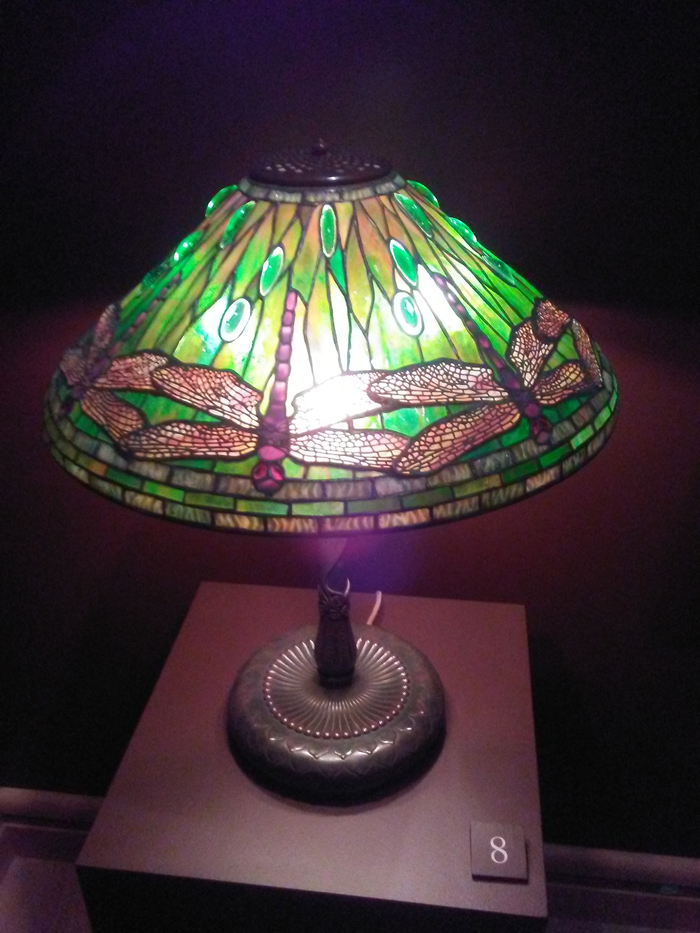 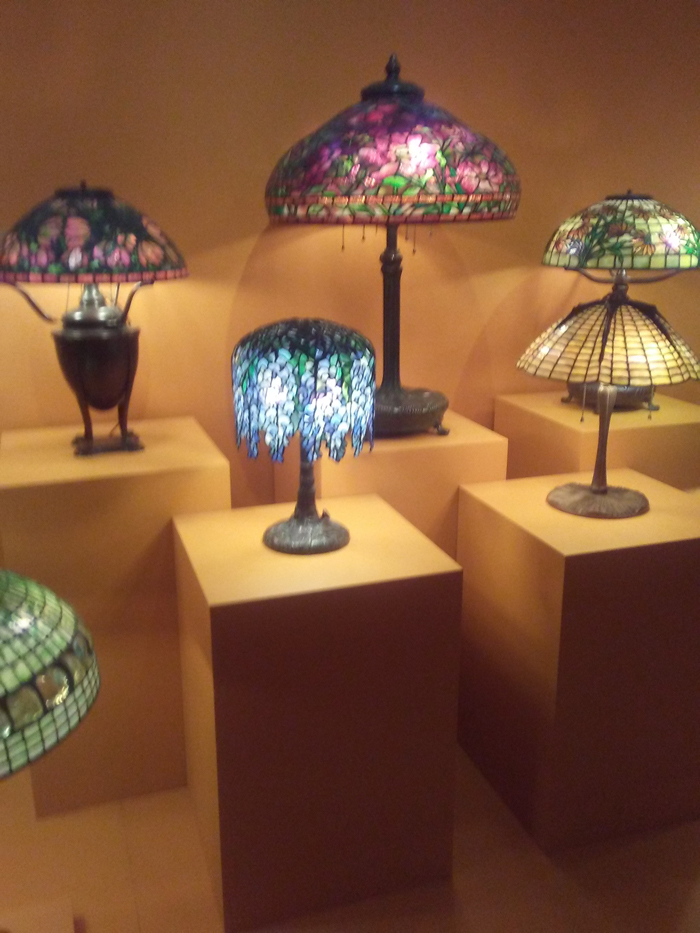