Adorn your bathroom with this Sisyphus toilet paper shelf and give a mythological ambience to your potty time. This diagonal metal shelf features a tiny figure of Sisyphus who appears to be pushing giant rolls of toilet rolls up a hill. In Greek mythology, Sisyphus was a cunning king of Ephyra known for his deceitful character and hubristic belief. Putting full confidence on his cleverness, he even tried to outsmart Zeus. As a punishment for his arrogance, Zeus ordered Hades to chain Sisyphus in the Underworld. However, Sisyphus’ sneakiness got the better of Hades and the God of the Underworld ended up being chained himself.

By cheating death, Sisyphus earned the wrath of the Olympian Gods, more particularly Zeus. After releasing Hades, Zeus again ordered the demise of Sisyphus. And this time, a harsh punishment awaits him that he would wish he was better off dead. Sisyphus is to roll a huge boulder up a steep hill. However, Zeus puts a spell on the boulder so that it would roll away from Sisyphus before he can reach the top. Over and over again, the once-powerful king has to roll the enchanted boulder with useless efforts and eternal frustration.

Let the story of the arrogant and deceitful king teach you a valuable lesson every time you hit the toilet. As you sit there pondering about life, let the Sisyphus toilet paper shelf remind you that honesty and humility are the most noble traits. Of course, you should never ever challenge the gods if you don’t want to end up with unending punishment. 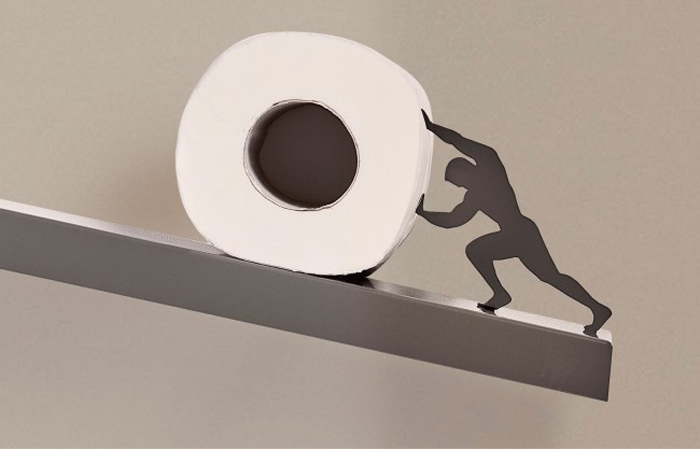 Setting this Sisyphus toilet paper shelf up is super easy you won’t even shed a single sweat. Attach the figure using the nut and bolt that are included in the box. Using the adhesive tape, mount the shelf to any clean, smooth vertical wall. For more stable placement, support the adhesive tape with screws to secure the shelf in place. Make sure to mount it slightly diagonally but not too slanted to keep the rolls in place. 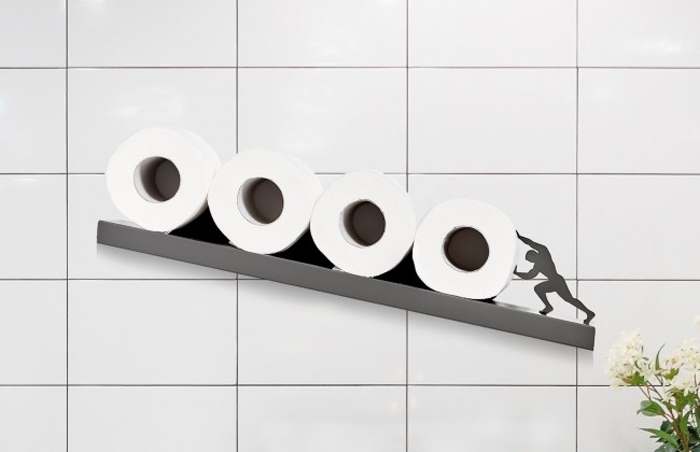 Get the shelf here and spend every potty time in contemplation as you reflect on your own uphill battle called life. But on a less serious note, you should really get this shelf because it would really look good on your bathroom.