By now, you’ve probably come to terms with the fact that summer is nearly over. Kellogg’s, for one, hasn’t wasted time in spicing up their various snacks. The first among the many delicious offerings they’ll have you falling for this year is the Pop-Tarts Pumpkin Pie Flavor! This classic fall dessert-inspired treat joins the brand’s mouthwatering lineup this year that includes the Frosted Chocolatey Churro and Froot Loops-flavored Pop-Tarts.

Dessert-inspired flavors are integral to the Pop-Tarts brand. Thanks to this beloved Kellogg’s brand, we’re able to enjoy our favorite desserts and snacks any time, without all the fuss and even lesser calories! However, it appears that the Pumpkin Pie Pop-Tarts aren’t exactly a new offering. In fact, Kellogg’s first introduced it as a limited-edition offering a decade ago – in 2010! It may have been a long time coming, but we’d like to think that Kellogg’s had good reason to keep this delightful flavor from us for so long. 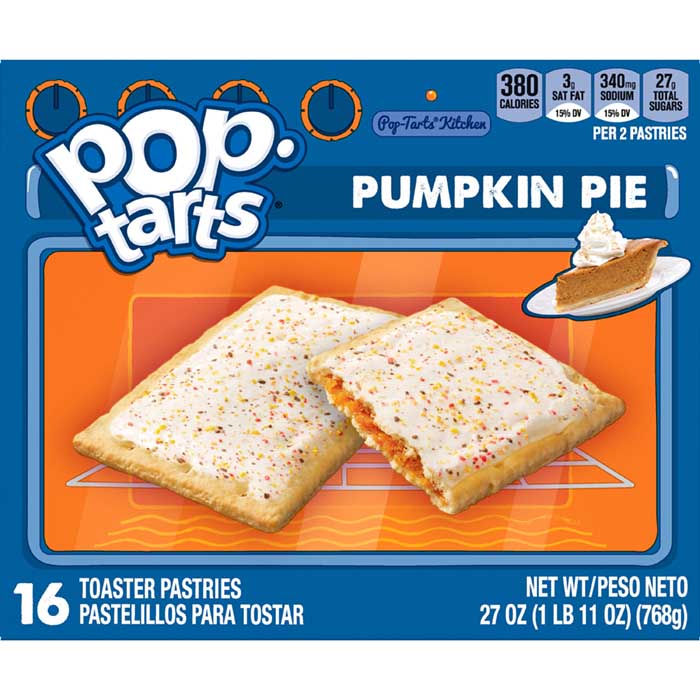 You can now enjoy your favorite seasonal pie anywhere 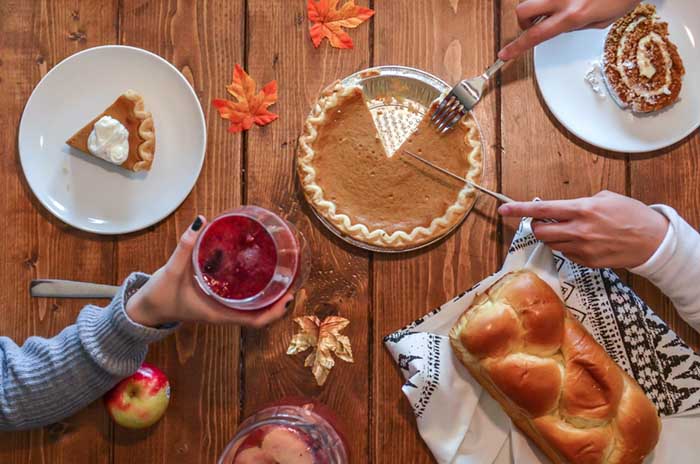 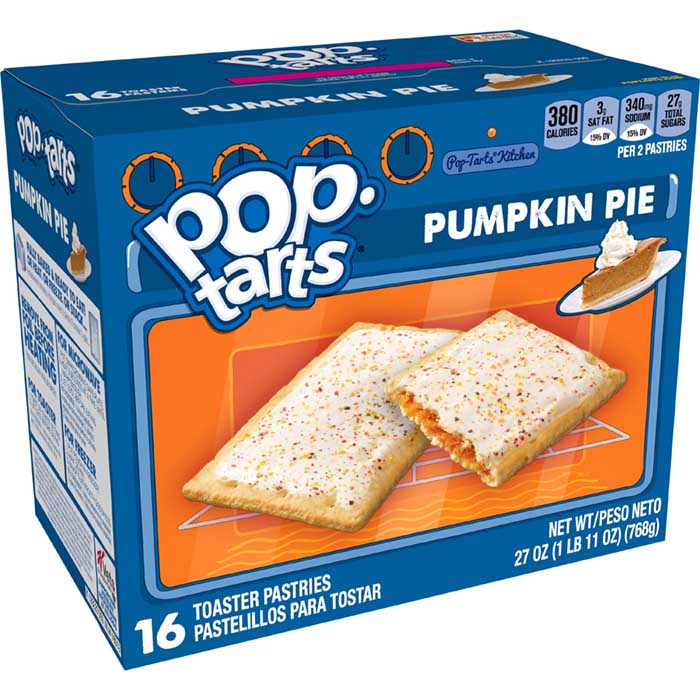 Popular snack food review website The Impulse Buy got to try the Limited-Edition Frosted Pumpkin Pie flavor in 2010. In their review, The Impulsive Buy commended Kellogg’s for producing a Pop-Tart that actually tastes like the seasonal pie. This feat, TIB said could’ve only been achieved with the incorporation of “black magic”. They even went on to say that the flavor is among the few that “actually sense”. Everybody who got to bite into this limited-edition treat loved it, so it’s really strange that it didn’t become a regular seasonal offering thereafter.

I guess #fall is here now. It’s not even Labor Day yet, but pumpkin stuff is hitting shelves. So get on your UGGs and faux fur vests and let’s get crazy. PSL season is arriving. . . . #pumpkin #psl #pupmkinspice #dadbod #dadbodsnacks #poptarts #? #pumpkinpie #mmm #basic #omg #yas #yummy #whitegurl #ootd #explorepage

But at least we won’t be going without a pumpkin flavored Pop-Tart treat this year! And it appears that Kellogg’s hasn’t made many major alterations to their autumnal masterpiece, save for its packaging. The 2010 edition featured a golden fall landscape in the background and a pair of the pumpkin pie Pop-Tarts in the foreground. This year’s version doesn’t come with the whimsical golden landscape. Instead, the box has been designed to resemble a toaster oven and features a slice of the iconic autumnal pie on the side. Aside from this cosmetic change, the Pop-Tarts don’t appear to have been altered in anyway. Kellogg’s sure understands that while innovation is good, knowing when to leave something alone is also important.

These Pumpkin Pie Pop-Tarts taste just like the real thing

This season-exclusive toaster pastry features a crust that would remind of you of pumpkin pie. Then, it’s covered with white frosting that’s topped with russet, yellow and orange sprinkle candy bits. The sprinkle garnish didn’t exactly sit well with The Impulsive Buy in 2010. But there’s really nothing wrong with adding pops of color in a Pop-Tart treat, right? After all, the most important element of the Pop-Tarts Pumpkin Pie is what’s inside the pastry.

Pumpkin Pie Pop-Tarts are headed back to shelves with new box graphics for 2020!

. ?? Pumpkin Pie Pop Tarts ?? 6.8 ? @7eleven . ? $.99 ? Not sure how to score Pop Tarts. They’re Pop Tarts. We’ve all had them. Most of us grew up on them as a breakfast staple before hopping on the school bus. Brown Sugar was always a favorite as well as Frosted Strawberry. Then the #iifym community blew these up as something full grown adults eat out of the package; not even putting them in the toaster ? This is insanity to us. They’re called pop tarts for a reason. They’re meant to “pop” out of the toaster. These are so much better warm and toasted we have no idea why you’d eat them cold #rookies. Anyways, why fitness enthusiasts tracking their macros were eating these made no sense. They aren’t event that low in calories. One pop tart is 200 calories which is more than the 180 a Toaster Strudel is. And we all know Toaster Strudels are the GOAT when it comes to toaster pastries. We think it’s because you can eat them cold so they are portable unlike the toaster strudel which must be eaten toasted in your kitchen while watching Saved by the Bell. And then the pop tart flavors exploded. There are so many different flavors now, you could drive yourself crazy trying to pick one. Unfortunately the flavors dont come in a pack of two so you don’t have to commit to a whole box of a shitty flavor and can just sample all the interesting ones. That’s why we got these at 7-Eleven. They are just packs of two. The max any grown man wants to eat in a sitting. We have to say, when toasted with the pumpkin filling warm, these taste pretty darn close to pumpkin pie with a little added touch of sweetness from the frosting. We haven’t tried a lot of different pop tart flavors but we have to imagine these are one of the better ones. Just make sure to put them in the toaster as God intended. . . #sauced #saucedreview #saucedtreats #pumpkinpoptarts #poptarts #pumpkinpiepoptarts #poptart #breakfast #breakfastideas #breakfastofchampions #snacks #iifymfood #iifymlifestyle #junkfoodreview #foodreview #carbsafterdark #carbsarelife #cahhbs #carbscarbscarbs #carbs #pumpkin #pumpkintreats

According to the official description, the Pop-Tarts Pumpkin Pie have a filling that’s comprised of “pumpkin-pie filling, real nutmeg, and clove”. Don’t you just love reading about words you can smell? We sure do! Kellogg’s, according to The Impulsive Buy, truly captured the pumpkin pie flavor. So if you ever suddenly find yourself craving a slice of pumpkin pie but are unable to go indulge in an actual slice, it would be good to have a packet of a Pop-Tarts Pumpkin Pie ready, right?

You can enjoy the Pumpkin Pie Pop-Tarts in different ways

Pumpkin Pie Pop Tarts Review ??? – AUTUMPKIN HAS ARRIVED EARLY THIS YEAR! ??????? – For those of you who don't know, in the US snackosphere, September marks the start of the Autumnal (Fall) Pumpkin Spice extravaganza. The taste of Thanksgiving celerations before we hit MINTER ?? and are bombarded with a landslide of minty munchies! – Thanks to @gbgifts for getting the pumpkin party started early with these seasonal @poptartsus Pumpkin Pie Tarts. – I've never had a real pumpkin pie so not sure how true to reality this flavour is but it's definitely different to pumpkin spice flavoured snacks I've had. Truthfully pumpkin has no flavour so "pumpkin spice' is pretty much just cinnamon! But these Pie Tarts are heavily nutmeggy. It's intensely warming and woody and did shock me to have such a pungent Pop Tart, but I loved it! – I'm givin' a whole load of thanks for the amount of filling in these, they're like double stuffed! Packed with thick sticky, sweet pumpkin jam. A nutmeg version of the syrupy goo inside a Brown Sugar Cinnamon Pop Tart. I was so excited by the amount of filling that it made the usual dry pastry bareable and in this case the bland shell did a good job of kurbing some of the spicy Nutmeg intensity. Heated up gave me the closest to a fresh baked pumpkin pie as I could imagine! All finished with a decent layer of icing and a few crunchy co-ordinating sprinkles for extra sweetness. – I'm pumped about these punchy Pumpkin Pop Pies and I even love the box art designed like an oven. I just wish every Pop Tart would have this much filling! You've gotta be a nutmeg nutter for these but luckily I'm one big spice nut! – A pumped up-kin score of 8/10 ???????? – #pumpkinpie #pumpkinspice #autumn #pumpkinpiepoptarts #poptarts #poptartus #breakfast #kelloggsus #usfood #americanfood #murica #usa #newfood #limitededition #foodblogger #londonfoodie #foodreviewsuk #newfoodsuk #foodtrain #sweettooth #foodstagram #cerealrevirw #poptartaddict #junkfood #edrecovery #strongnotskinny #iifym #yum #foodporn #sweetreview

Enjoying the Pop-Tarts Pumpkin Pie Flavor has never been easier. You can pop them in the toaster then top it with whipped cream to give it that extra pumpkin pie-ness. But if you’ve got no patience, you can eat the pastry right out the package without reheating it anyway. You can also put your Pop-Tart in the freezer for 20 minutes and enjoy it in all its frosty glory. Either way, we’re sure that it would make a great partner for your pumpkin spice-flavored almond milk! Walmart is offering a 16-count box now, so order it fast before it’s gone!

Be on the lookout for the 12-count box too

I don't remember the last time I had a Pop Tart… But as it's Pumpkin Everything season here in America I felt like I should give them a go. I had them heated up in the toaster – but has anyone here had them frozen? Is it worth a go? Anyway, back to the Pumpkin Pie… It's your standard “filled with shit, don't look at the ingredients” affair. There's that familiar salted-cardboard pastry pocket, tender and soft in texture. On top there’s a broadly slapped on spread of crunchy icing and a dusting of coloured sprinkle bits. Inside is the big that's different – and for all the crap in these, I really enjoyed the filling. Warm, it's soft and gooey, reminding me of a brown sugar based cake mix. Spices are used generously, with ginger, clove and cinnamon standing out really obviously. While I know Pop Tarts are pretty crap as a food in general, there's something still fun about them – and I'll probably go and buy some of the Brown Sugar Cinnamon next. Just don't expect me to eat them for breakfast. I prefer having just the one as a snack. #pumpkin #pumpkinpie #pumpkinspice #poptarts #pumpkinpiepoptarts #snacking #seasonal #limitededition #junkfood #treatday #foodpics #igfoodie #fall2020 #sweettooth #instaeats