Who’s ready for November? The new Kit Kat Sweet Cinnamon flavor will be hitting shelves just in time for the Halloween. These limited-edition scrumptious treats will be here until Thanksgiving, provided that they won’t sell out quickly after the spooky season. Hershey’s recently unveiled the new fall-inspired Kit Kat flavor, in addition to its Pumpkin Pie flavor. And just like the Kit Kat Pumpkin Pie flavor, the new Kit Kat Sweet Cinnamon pieces also come as miniatures. Each bite-sized piece offers the classic taste of Kit Kat’s crispy wafers coated with rich milk chocolate and sweet cinnamon flavor. 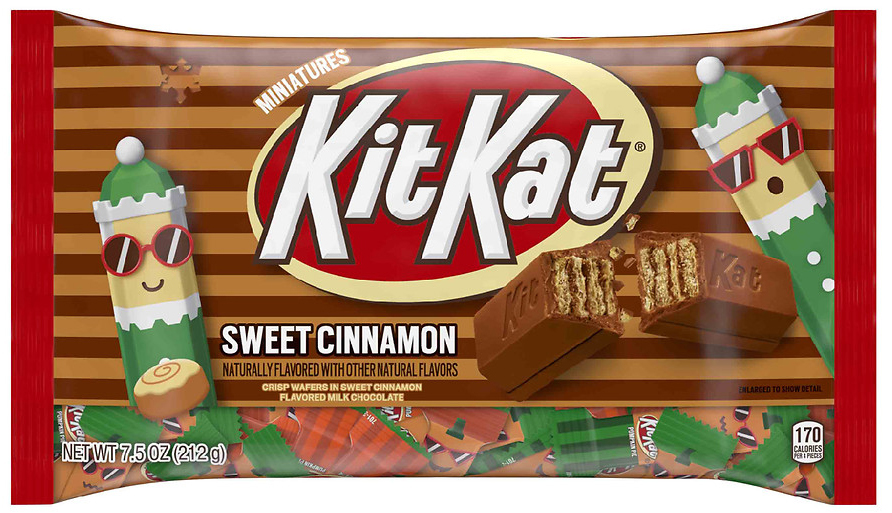 Cinnamon is rarely added to chocolate treats due to its strong flavor that sometimes overpowers the taste of chocolate. However, the Kit Kat Sweet Cinnamon flavor has a perfect balance of sweet chocolate and subtle warm cinnamon spice flavors that complement each other. The irresistible combination of taste and texture brings a seasonal twist to the iconic Kit Kat flavor. Each piece has individual wrapping and they come in a 7.5 oz pack. Just like the Kit Kat Pumpkin Pie, the packaging also features fall-themed design using deep orange and green colors. But this one has red-colored edges that will generally give you a Christmas vibe.

You’ll find the Kit Kat Sweet Cinnamon at major retailers nationwide starting November. Or you can get ahead of the crowd and get these delicious treats here. The new Kit Kat Sweet Cinnamon will surely bring more fun to trick or treat and would make a delicious dessert to your Thanksgiving dinner. But you have to be on the alert because this anticipated flavor is going to disappear fast. Be on the lookout for them at your nearest stores before they run out. You may also want to check out other fall-inspired treats such as the Oreo Maple Crème, the Reese’s Pumpkin Pieces, and the M&M’s Pecan Pie Flavor.