Let’s admit it, Easter treats can get a bit predictable and boring at times. Aside from egg-shaped and bunny-shaped chocolate candies and pastel-colored goodies, we’ve pretty much seen them all. Or so we thought. Well, this year’s Easter is looking kind of fiery as Peeps marshmallow treats get a new Hot Tamales flavor. Wait, what? We bet you didn’t see that one coming.

Just like typical Tamales-flavored candies, Peeps’ new brood of marshmallow chicks also boasts a “fierce cinnamon” flavor. To be honest, it’s quite a bold move for the brand. In addition, having a spicy taste is probably the last thing you would expect of fluffy marshmallows. 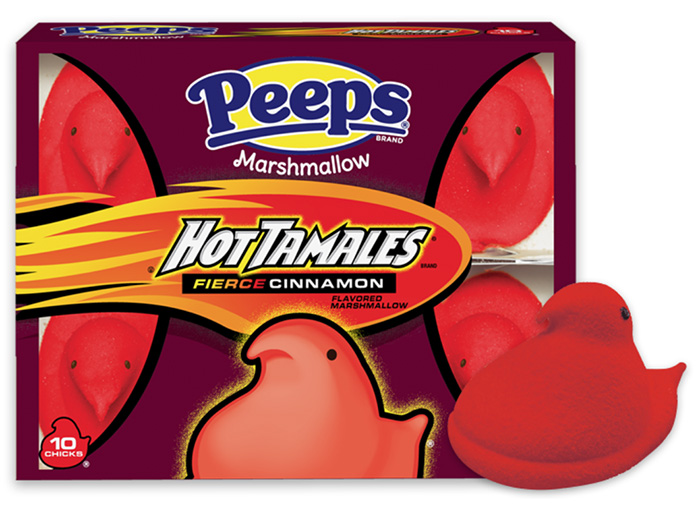 For starters, Peeps has always stuck to sweet or fruity flavors. These include Chocolate Caramel Swirl, Pancakes and Syrup, Fruit Punch, Sour Watermelon and Cotton Candy, to name a few. And now that the brand has decided to cross into the spicy territory, things have certainly gotten more interesting.

#Sour or #sweet you’re in for a treat! Which #PEEPS flavors are you most excited for?

Apparently, these red-hot marshmallow chicks have been around for quite a while already. In fact, Peeps started teasing fans of its upcoming flavors for Easter as early as January. And within the same month, the brand officially announced that the new sizzling sweet flavor is exclusively available at Kroger Family of Companies. These include Food 4 Less, Fred Meyer, Harris Teeter and King Soopers among many others.

?? We’ve hidden #Easter eggs throughout this video hinting at some of our #new upcoming products, flavors & partners for 2020! Peep the video and leave your guesses below ?

? The @hottamalescandy Fireball got loose in our factory and the results are SIZZLIN’! NEW PEEPS HOT TAMALES Fierce Cinnamon Flavored Marshmallow Chicks are now available exclusively @krogerco Family of Stores ???

Instagram users @junkfoodmom and @i_need_a_snack_ were among the firsts to have spotted the new flavor on shelves. The new fiery flavor comes in an 85-gram pack with ten marshmallow chicks inside.

Ahhh c’mon. If you’re going to give us Hot Tamale Peeps give us that fierce cinnamon taste. These have just a whisper of flavor. Good news if you’re unsure to try them. Bad news if you were hoping for that pop of cinnamon spiciness. Hot Tamale fans will be disappointed. I do appreciate the collaboration of classic candy and Peeps tho. ???FOUND IN KROGER. #peeps #hottamales #hottamalepeeps #fiercecinnamon #justborn #peepsbrand #peepsonality #marshmallow #kroger #junkfood #peepseason

According to @i_need_a_snack_, the chick-shaped marshmallow treats come in a bright, deep red color—both inside and out, surprisingly. Regardless of flavor, the insides of Peeps marshmallows have always been white. So, the user noted that “it was a really cool touch.”

It’s Review Time! ??? This Easter season is coming in hot, literally! @peepsbrand has teamed up with @hottamalescandy and decided to merge together to bring us a new 2020 Easter candy! I present, Hot Tamale Peeps! • • Now I wanna start of with this before I get anyone’s hopes up! These are a @krogerco exclusive so if you don’t have one by you hit, up ebay or I’m sure peeps.com will get them possibly! A pack of these will run you about 2.50$ and you get 10 Peeps in a pack! As you can see in the pictures my Peeps were a little deformed ? the left eye was on top of their head, so it was more of a cyclops! Ahaha. The smell on these were AMAZING! Spot on smell to a Hot Tamale, the sweet and spicy cinnamon smell with every whiff! The taste itself I must admit as VERY faint but it is there, which kinda sucks. I wish the Hot Tamale flavor was powerful, like a Hot Tamale but with these Peeps its very subtle, which may be nice for some of my followers who aren’t big cinnamon or spicy fans! I also love how the whole inside of the Peep is dyed red, it was a really cool touch, considering most normal Peeps the marshmallow is white, no matter the flavor! Overall these are a great new addition to the @peepsandcompany family and since they are my favorite Easter candy I will for sure finish these off by the end of the night! ? 8/10 ?

Meanwhile, in terms of taste, both users claimed that the spiciness was rather on the faint side. Well, that’s still good news especially for those who are not fond of the spicy cinnamon flavor.

We’re fired up for these new Hot Tamale Peeps! These marshmallowy combine the spicy cinnamon flavor of Hot Tamales candy with the sweetness of a Peeps marshmallow. We are intrigued! Note that these are a Kroger exclusive. If you’ve tried these already, let us know your thoughts! ??

so should we just become a Peeps fan page for the next 6 weeks?

Got a surprise shipment of delicious hot tamales AND the new hot tamale peeps????Did I like them? You could say that {the last two were eaten promptly after the picture ?} #grateful366 #day66 #hottamales #peeps #yummyinmytummy

But given that this is such an unexpected and intriguing crossover, we’re definitely not letting this pass. Now, who’s silently hoping for Mike and Ike and Peanut Chews flavors?