We all know that garage sales are sometimes filled with junk but you can find a few gems that could secretly worth a ton if you’re really lucky. We’ve previously featured the times when people have found the best bargains in yard sales. But this Wellington woman, who thought she had bought a beautiful paperweight in a yard sale, actually got herself something totally different.

On her Facebook post dated December 15, 2020, Jessica Roberts shared a rather utterly weird story about a particular paperweight she bought at a yard sale. She said that 5 years ago, she and her son were looking through a garage sale when she saw the heart-shaped item on display. Her son asked her to buy the decorative item so he could give it to her as a gift. She initially thought it was a pretty paperweight so she bought it for only $1. 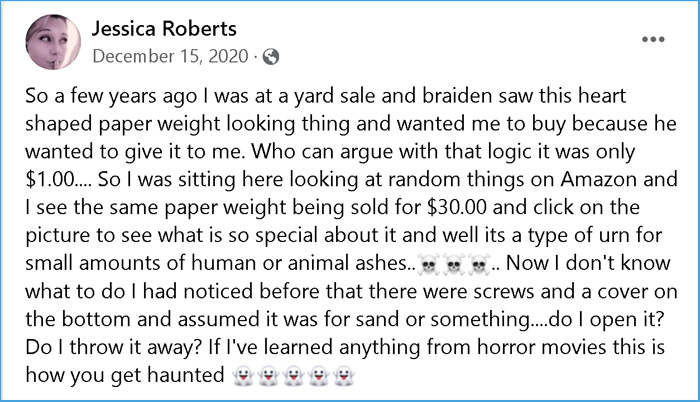 Roberts had been using it as a paperweight since then. But 5 years later, she found a similar item on Amazon which was being sold for $30. Intrigued by it, she clicked on the listing and was shocked to discover that the item was actually a tiny urn designed to contain small amounts of cremated ashes. Terrified of the discovery, she turned to social media for some advice on what to do with the heart-shaped urn.

One of the commenters said that it’s a picture frame that opens up to reveal a photo inside. She even suggested to open it up to see for herself. When Roberts unscrewed the back of it, she found a plastic bag inside. And her suspicion was confirmed when she saw the bag containing ashes. It wasn’t a paperweight nor a picture frame after all – it was an urn. Although she felt weirded out that someone would sell someone else’s memento, Roberts decided it was best to return it to whoever it belonged to.

With the help of people on Facebook, her post was shared on various social media platforms to help find the owner of the urn. The local newspaper caught wind of it and featured her story to help the search. The day after the article was published, Roberts got a call from a man who claimed that the urn belonged to her wife who lost it a few years ago.

“His wife’s family had seen the post and recognized it as the missing piece to a matching set of urns containing the remains of his wife’s father. Years earlier, his wife had left an abusive partner who had kept her belongings out of spite. Somehow, this urn ended up in my hands and I had kept it safe for years without knowing how important it really was.”, Roberts explains.

Roberts also added that she had already met with the man to personally return the urn. On their meeting, the man told her that his wife didn’t know that he had found her father’s remains. And he’s planning to surprise her with it on Christmas Day. Roberts was more than happy to return the urn to its rightful owner and somehow made someone’s Christmas a lot more joyful.

Here’s what people have to say about this interesting story