We’ve seen the popular meme going around social media joking about the uncanny resemblance between Jesus Christ and the most legendary Jedi master in Star Wars universe. Well, this guy from Utah wittily puts this meme to good use by pranking his religious parents and giving them an Obi-Wan Kenobi portrait.

Back in Christmas of 2018, Ryan Buchanan pulled a clever prank on his Mormon parents. As a Christmas present, he gave them a framed portrait of actor Ewan McGregor portraying his iconic Jedi character. Of course, Star Wars fans would immediately recognize the famous Obi-Wan Kenobi. But for those who haven’t seen the series, particularly the religious ones, they would instantly assume that the portrait is an artistic representation of Jesus Christ. And that’s exactly what happened to Ryan’s parents upon seeing the framed photo. 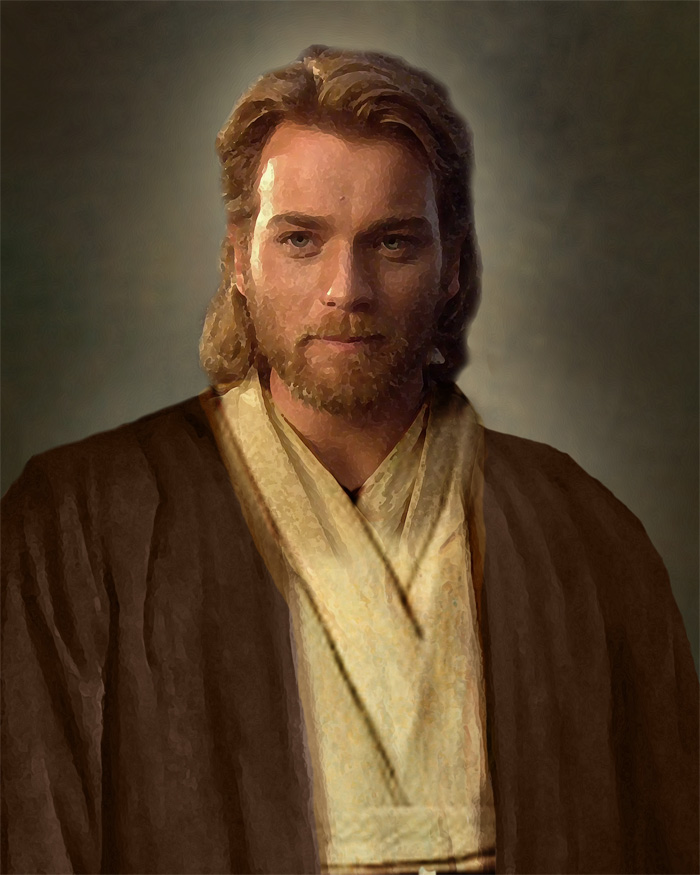 The now-famous Jedi Christ meme originated from an Imgur post in 2015 featuring Ewan McGregor in his brown Jedi attire while sporting his character’s trademark long hair with voluptuous left sided part and longer sides. The photo, which was filtered to make it look like a painting, indeed looked oddly reminiscent of Jesus Christ. This gave many people a brilliant prank idea. One Redditor pulled a successful one when they replaced a picture of Jesus Christ at their parent’s house with a portrait of Obi-Wan Kenobi. Amusingly, their parents didn’t notice the swap.

“Shout out to my brother for replacing a picture of Jesus at my parent’s house with a picture of Obi-Wan Kenobi as portrayed by Ewan McGregor. Three months and counting without them noticing.” 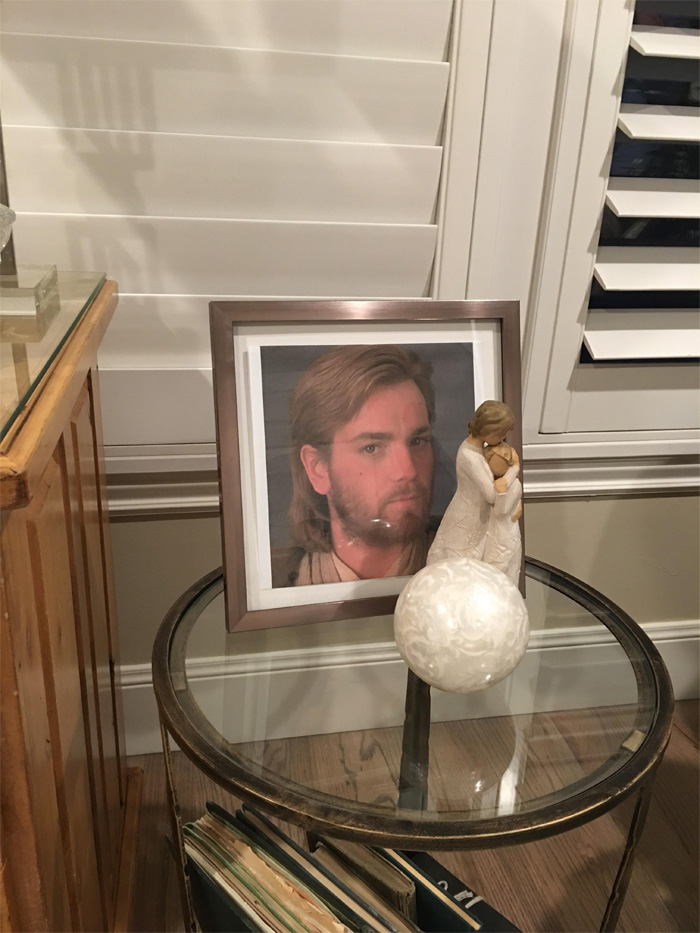 Ryan decided to use the same prank on his parents – but not as discreet as secretly replacing the picture of Jesus with the Obi-Wan Kenobi portrait. He will surprise them with the Jedi’s picture itself without telling them anything about it. Ryan thought their reactions would be hilarious so she recorded the moment on video which he later uploaded on YouTube. As he had expected, his parents were ecstatic when they unwrapped the gift and saw the portrait which they thought was of Jesus Christ. The prank was a huge success that Ryan couldn’t help but show a mischievous smile to the camera as his parents gratefully hugged him.

Ryan Buchanan Recorded The Moment To Capture His Parents’ Reaction 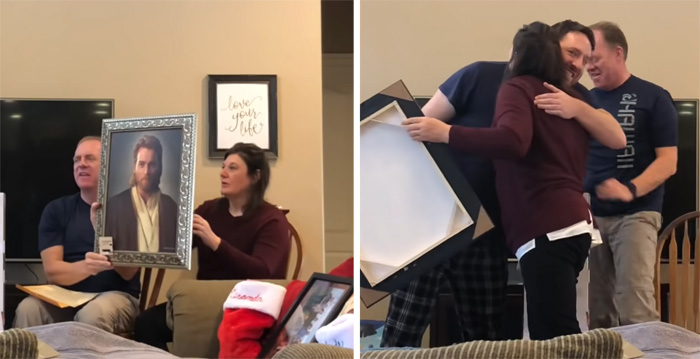 The video went viral and Ryan kept everyone updated with a post on Reddit showing a photo of the Obi-Wan Kenobi portrait already hung on the wall. He even joked about how he could get out of this prank alive when his parents finally figure out the truth. Well, his parents should be glad to know that they’re not the only ones who fell victim to this uncanny resemblance. One Redditor shared a photo of the popular Jedi placed on a mantle along with a cross because their grandma thought it was Jesus.

“I’ve made a huge mistake. Mom loves her Jesus Christmas present and I’m not sure how to get out of this thing alive when she figures out.” 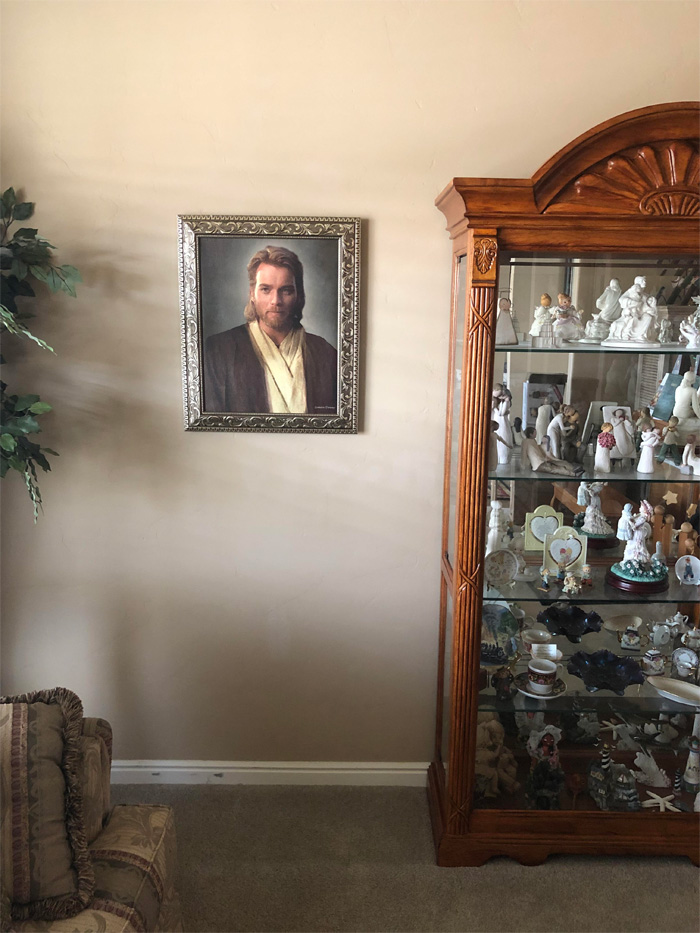 “Grandma mistakes Obi-Wan for Jesus, because that’s not already a meme or anything” 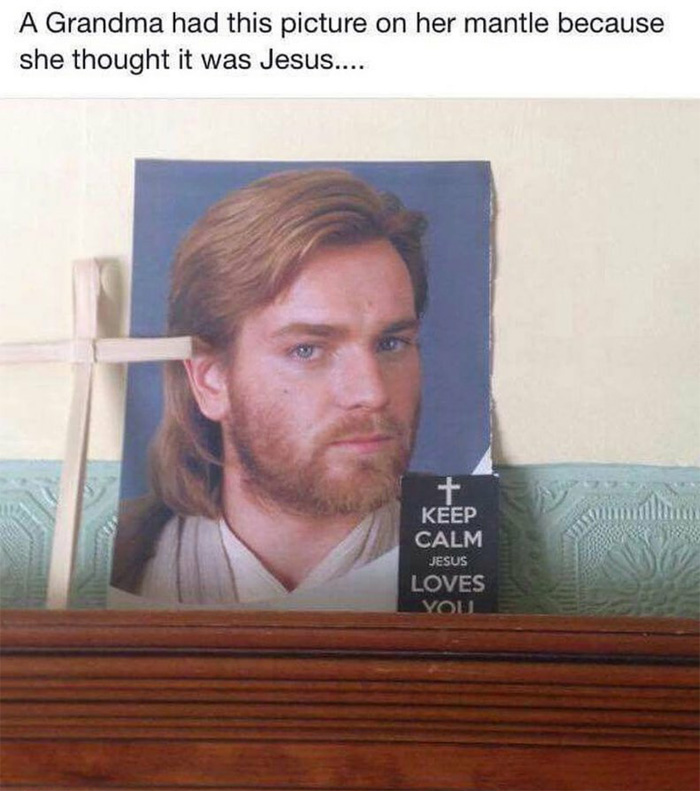 Watch his parents unwrap the Christmas gift on the video below