There are a good number of bakers that are extra creative when it comes to decorating. As a result, they can create edible cake sculptures. But, beyond doing that, Maddie Lu takes a step further and creates what’s called the Millennium Falcon Cake.

Surely, if you’re a Star Wars fan, you would appreciate the kind of work that Maddie has put into this project. The spaceship cake looks just like the Millennium Falcon in the movies. Plus, it’s definitely edible.

With full force, Lu and her team sculpted the out-of-this-world cake. Indeed, it should no longer be surprising to know that the young baker once won a prestigious baking competition. It was Food Network’s Winner Cake All! And, Maddie and her partner Crystal won the championship! 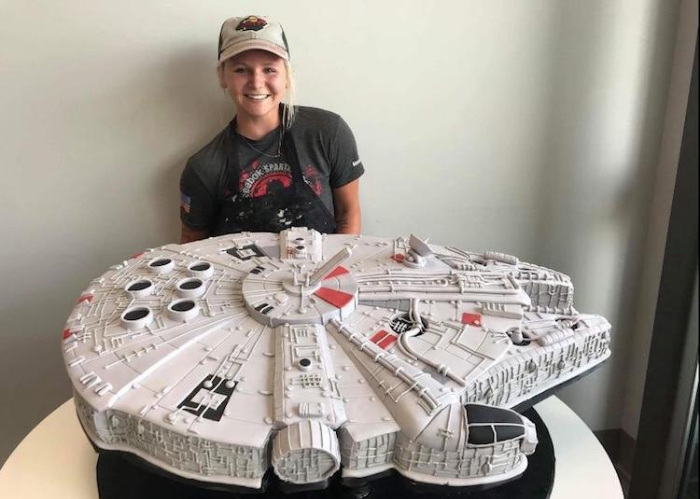 The Millennium Falcon cake has been a favorite of several cake artists.

Aside from Maddie, there was another baker who created a Millennium Falcon cake design. Sarah Strain of Eat My Cake made a version that’s slightly smaller than Maddie’s. Overall, it was also quite impressive. Furthermore, Sarah shares how you can also create your own Millennium Falcon cake. Just scroll down to see her video below.

As you would see, Sarah first sculpts the base from cake sponge. Then, she adds a butter-cream layer plus a sheet of fondant (with metallic gray color). Next, you would see her adding the details of the spaceship cake. There, all the engines, cannons, metal bolts, shields, and satellite dish are placed.

Moving on, Sarah creates intricate lines, using an airbrush to emphasize shadow and depth. Finally, you would see Sarah supporting the huge Millennial Falcon cake with a galaxy base. Absolutely, you could say the final output would be worthy of Hans Solo.

Be sure to watch the video below!

Bakers Maddie Lu and Sarah Strain separately created a Millennium Falcon Cake. Strain shares a video of how she made her version. 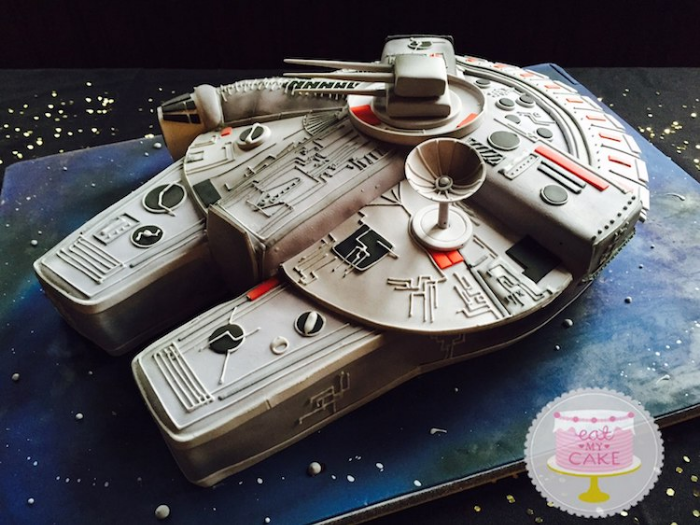 Watch how to build a Millennium Falcon cake here: