Animals seem to know more about friendship than we humans do. They constantly show us that forming a close bond doesn’t require any prerequisites or have boundaries. We here at Awesome Inventions have shared many instances where unlikely pairs made the best pals, like the lynx and domestic cat duo over at Linengrad. But the story of Herman, the pigeon who can’t fly, and Lundy, the chihuahua who can’t walk, will absolutely melt your heart!

This adorable duo are currently roommates over at Mia Foundation in New York City. Mia Foundation is a non-profit organization that takes in disabled and injured animals. “Our main goal is to take in animals with birth defects. But people also bring us injured birds and squirrels sometimes”. Sue Rogers, its founder and owner, shared. So, that is why this cute little pigeon ended up at the foundation. 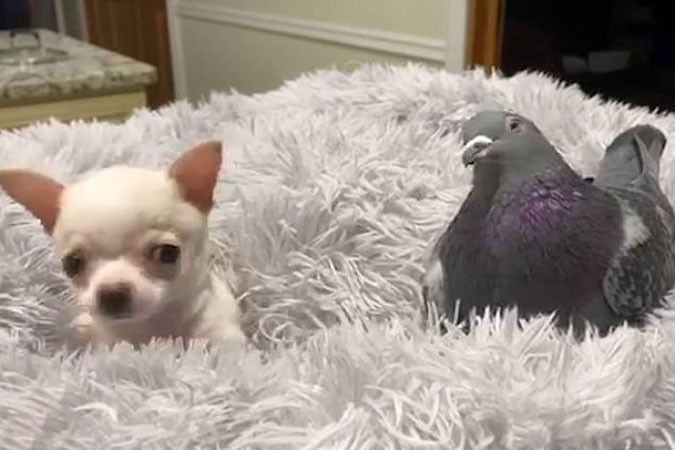 The pigeon was rescued from a car dealership over at Hilton, New York. He was rescued after it was realized that he had been sitting on the pavement for three days because he couldn’t fly. Unfortunately, wildlife experts said that he can’t be treated. Fortunately, as his rescuers prepared to put him down, Sue stepped in. Since then, he’s been under the watchful wing of Mia Foundation. He stays in his crib when he’s not going out on walks to stimulate his little legs. The pigeon had all the room to himself until Lundy arrived. But he semes to be more than happy to share his space with the pup. 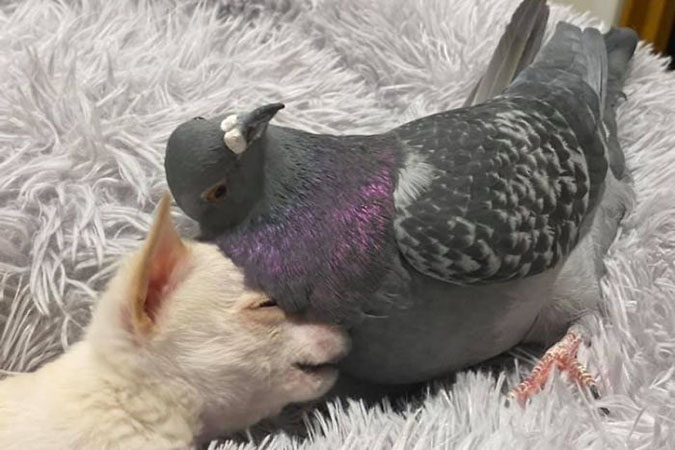 On the other hand, two-month-old Lundy was sent to Mia Foundation by his breeder from South Carolina because he suffers from “swimmer’s syndrome”. The syndrome hinders Lundy from being able to stand and walk like his littermates. His hind legs cannot support him. And Sue couldn’t have been more right when she roomed them together. The flightless pigeon’s reaction was priceless! 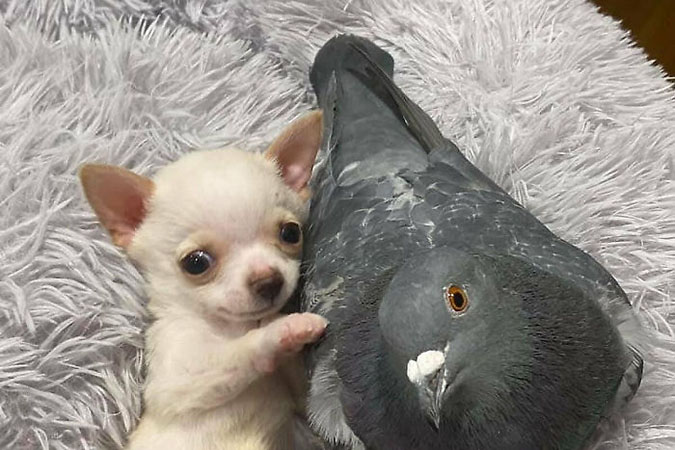 The old timer immediately started nuzzling onto the newcomer. Their instant bond surprised Rogers, who shared that they’ve been inseparable since that fateful day. In fact, they both love spending time together, all snuggled up in their favorite fluffy blanket. Hopefully their positive interaction with one another will help them both overcome their obstacles. At the moment, Lundy only weighs a pound, so he’ll need a chair to help him train his legs. They may not be able to fly or walk, but these two have gone around the world in a matter of days! You can show your support for Mia Foundation by making a donation here.

Watch them bond below

Posted by The Mia Foundation – Love For Mia on Tuesday, 18 February 2020

WOW! I never imagined the pictures of Lundy and Herman would touch so many people! Almost 5 million people in a little over 24 hours!! Their little story is being shared all over the world!Welcome to the thousands of new followers. We hope you enjoy our page and our special animals ? And, thank you also for the donations coming in. We really do need them as we have a few surgeries coming up soon! It brings me to tears to think that our little Herman (the pigeon) is known worldwide now! I’ve been called crazy for keeping Herman alive and trying to make his life a happy one. His life has meaning too ? And Lundy….well, who wouldn’t love that sweet little nugget?Thank you all again ? ?

Posted by The Mia Foundation – Love For Mia on Saturday, 15 February 2020