It’s never too early to have the holiday season in your mind. After all, it’s the one season when we get a seemingly endless stream of wonderful new offerings from our favorite brands! So if you’re already slipping into your holiday-happy-self, then you’ll love this new offering from Coffee Mate! Coffee lover, meet the new Cookies ‘N Cocoa flavor. This new creamer’s guaranteed to make your holiday (and non-holiday) mornings way more whimsical than ever!

Earlier this year, the brand launched two cereal-inspired coffee creamers to make your morning cup twice as fun. Then, in June 2020, the brand took to Twitter to ask fans what they’d would like to mix in their coffee during the holiday season: Chocolate Chip Cookie or Hot Cocoa? In the end, the Chocolate Chip Cookie flavor prevailed and topped the poll. However, to everyone’s surprise, the brand decided to take an entirely different direction by deciding to combine the two flavor options in one creamer! 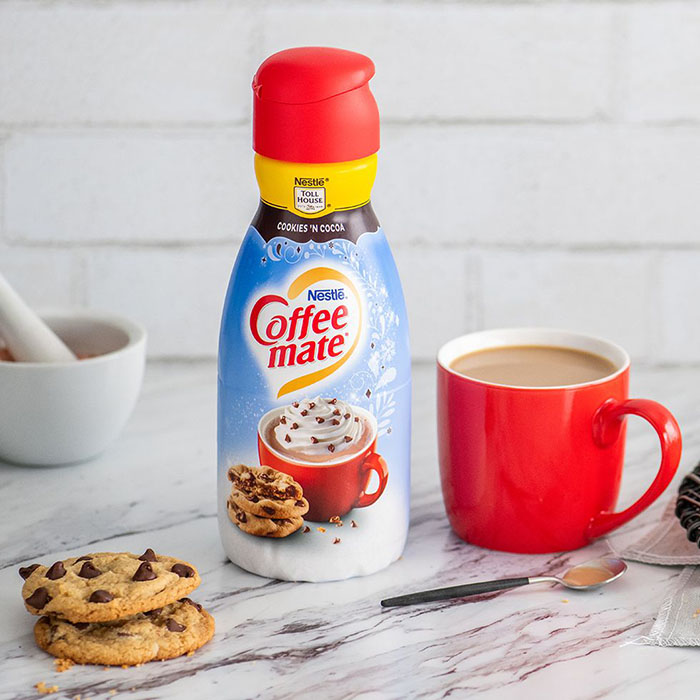 But instead of releasing just one flavor, Coffee Mate decided to launch the Cookies ‘N Cocoa flavor instead

The flavor mashup was totally unexpected. But it’s absolutely welcome! Officially, the brand announced that they would be releasing the Cookies ‘N Cocoa flavor in September. But it seems that some are getting it early this year, because Instagram snack hunter @candyhunter has already found it at their local Hy-Vee. Meanwhile, @snackstalker got the holiday special offering alongside the returning Pumpkin Spice flavor.

Christmas in July sure isn't over! The seasonal coffee creamers are already starting to hit shelves! A few weeks ago, Coffee Mate asked fans to pick between Chocolate Chip Cookie and Hot Cocoa to return for the winter. Turns out it's both! I found the new Cookies 'n Cocoa Coffee Mate creamer at Hy-Vee.

According to Nestlé, this limited-edition holiday offering wraps together the decadent flavors of Nestlé Toll House chocolate chip cookies and a warm cup of hot cocoa. Talk about a cozy combo, right? A 32-ounce bottle is expected to retail for $3.99 in all retail stores that carry the brand. So if you’re looking to add some more cheer and merriment to your morning cup, keep an eye out! We’ve got a feeling this holiday flavor will be a staple on everyone’s festive breakfast spread.