Cocoa Puffs, the round chocolate-flavored crunchy cereal bites that we all love, can now be enjoyed in a different form. General Mills is set to give us sweeter mornings by bringing back its Cocoa Puffs Brownie Crunch Cereal. Fans of this cereal brand could certainly remember these ‘sweetened chocolatey squares’ from back in 2011. And probably cried when they disappeared from the shelves.

For those who missed the square-shaped chocolatey cereal, you can now rejoice because you’ll be seeing it again this year. Early this year, there have been rumors that the Brownie Crunch Cereal is making a fresh comeback. The much-anticipated cereal is said to be back in August 2020. But it appears that they’ve already hit the shelves which is actually earlier than expected. 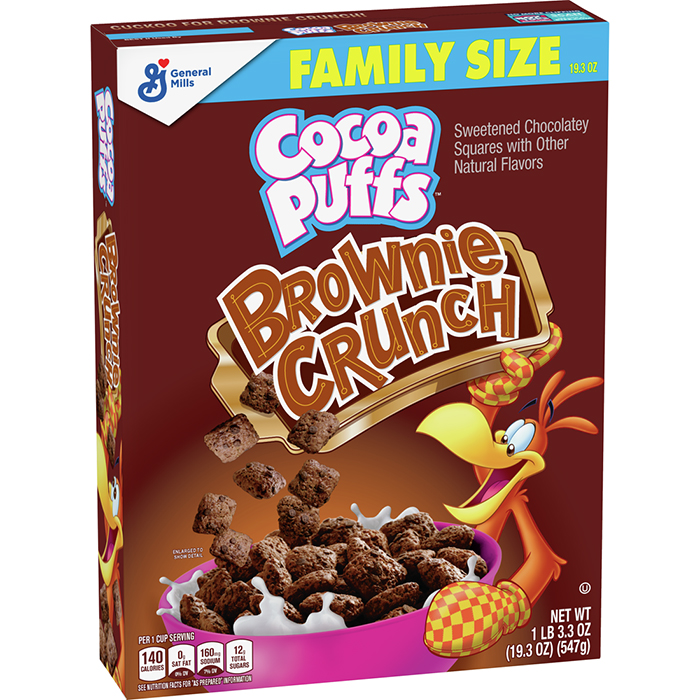 What actually makes it different from the classic Cocoa Puffs? Apart from the shape, the Brownie Crunch cereals have dark specks throughout them which seem to be tiny chocolate chips. So, every square gives a more chocolatey flavor in every bite. Chocolate lovers are going to love this variety even more than the original. People who have tried it claimed that the square pieces are a bit softer than the traditional one. And that’s to be expected since brownies are supposed to be fudgy, not crunchy.

It’s Review Time! ?? @generalmills is back again and this time their taking an old favorite, classic Cocoa Puffs, and giving it a home cooked makeover. I present, Cocoa Puffs Brownie Crunch! • • Now this isn’t the first time that @generalmillscereal has released this cereal, it actually first released in 2011 and now it’s back again and boy are we glad! ? Now I love the box artwork for this with Sonny wide eyed pouring out a brownie shaped Cocoa Puffs into a bowl from a pan and inside the pan, with cool lettering is the Brownie Crunch logo! Now it doesn’t specifically say, but I believe this is indeed Limited Edition, so stock up before its gone again! Now the smell is SPOT ON to brownies. It’s actually incredible how closely the smell is to a batch of freshly baked chocolate brownies, its lovely! Now as you can see, these aren’t your average Cocoa Puff shapes. These are Brownie Squares with what seems to be little tiny chocolate chips throughout each and every square giving it an even deeper level of chocolate with each bite! Now the taste is just as spot on and is so rich and sweet with the milk chocolate brownie/cocoa taste and really does give you a sort if different taste than the traditional Cocoa Puffs! I also think that these seem to be a little bit softer which I love, so they don’t tear up the roof of your mouth! Overall these are a really cool edition of a great classic cereal and hopefully we get some other editions in the future! 7/10 ?

If there’s something these two varieties have in common is that both give that munchy sensation that Cocoa Puffs are known for. Furthermore, the Brownie Crunch also leaves delicious chocolatey milk in your bowl that will make you go cuckoo. Let us inform you though that the square chocolatey cereal is a limited-edition offering. And just like what happened in 2011, they will eventually disappear from the shelves once again. You already know what to do, right? Stocking up on these goodies is the best way to go.

? Initially released for a limited time in 2011, Cocoa Puffs Brownie Crunch has returned! Ever since Double Chocolate Krave had its recipe changed at the end of 2018, we haven’t had a favorite chocolate cereal to match it. Oreo O’s Mega Stuf is incredible, but that’s a cookies and creme cereal. So when we saw Brownie Crunch was back, we hoped it could fill the void that has been present all this time—and that it does!! We feared that this was just going to taste like Cocoa Puffs, but its texture and chocolate-chip-esque specks set it apart from the original. We would seriously stock up on this cereal. That’s how much we enjoyed it! ?? We found this box at ShopRite.

The Brownie Crunch is available in mid-size box and family size box. You can find them in the cereal aisle at your nearest grocery store. Or you can order the family size box online if you’re not in the mood for an essential trip.