We can hardly wait for summer to arrive so we can booze and chill all we want. But hey, we can start the summer party as early as now. Costco is giving us an early taste of summer by bringing back Slim Chillers’ Vodka Martini popsicles. That’s a very long name for a fun-size treat. So, we’ll just call them boozy popsicles because they’re basically booze in the form of a popsicle.

Costco introduced these icy treats last year’s summer and this product became an instant hit. Now the giant wholesale company is bringing back its summer best-seller and people are going gaga over it. It’s a bit too early for summer but we are more than happy about it. Slim Chiller’s boozy popsicles are now available again. We can again enjoy all the four original flavors – Appletini, Cosmopolitan, Lemon, and Watermelon Lemonade. Each pop contains only 100 calories so you can booze as much as you want without the guilt. Furthermore, it has 8% alcohol content which is mainly vodka and a splash of vermouth. 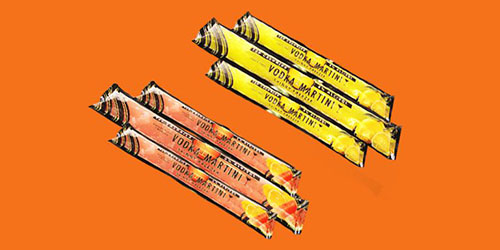 News about the product’s big return rapidly spread across Twitter and people are so excited about it. Here’s what the Twitter-world has to say:

?O.M.G…. #vodka #martini otter pops?!! $19.99 for 12! I know these won’t be in Oregon cuz we are a liquor controlled state but if you have these in your store can you tell us in the comments below what city and state? Please!??? ? @raevinnp *price and availability may vary per store

I found vodka martini freezer pops at Costco tonight and now I’m pretty excited about my plans for getting drunk this summer.

Guess who found the vodka martini pops at Costco ?

You can buy these frozen desserts in 12-packs for only $19.99. So, what are you waiting for? Run to the nearest Costco store and grab your pack of boozy popsicles now. You can also buy them in any BevMo store and some local liquor stores.  Or buy them online through Hi-Time Wine where you can opt to purchase them in 12-packs or individually. More importantly, make sure to hide these alcoholic frozen treats from your kids.
If you’re a fan of vodka, did you know there are ways to use vodka that doesn’t involve drinking that not many people know about! Check out this post about brilliant ways to use vodka.