The seven wonders of the world is a list to give worldwide recognition to the most remarkable sights and structures. In 2007, the New7Wonders Foundation was formed to decide the new list based on votes from people around the globe. The new seven wonders include the Great Wall of China, Petra (Jordan), Colosseum (Rome), Chichen Itza (Mexico), Machu Picchu (Peru), Taj Mahal (India), and Christ the Redeemer (Brazil). There’s no doubt that these landmarks truly deserve to be in the list. But don’t you know that the original list of the seven wonders was first compiled in the 2nd century BC? We refer to the original list as the seven wonders of the ancient world.

Antipater of Sidon, a Greek poet in the 2nd-century, compiled a list of the most spectacular structures during that time. His poems and writings served as guidebooks for Hellenic sightseers. Of course, there was no TripAdvisor or social media during those times. So, tourists only rely on guidebooks in choosing destinations. Since ancient tourists can only travel to limited distances, the seven wonders are all located around Mesopotamia and Mediterranean. But why choose only seven? The world actually has more impressive sights to offer but why seven? Greeks believe that the seven is a lucky number. Even now, the number seven still stands to symbolize perfection and prosperity.

The seven wonders of the ancient world were decided based on their incredible architecture and remarkable engineering. Each of the structure is a flawless representation of the magnificent architecture of the 1st and 2nd century. However, if you decide to include these historical landmarks into your bucket list, you may end up in disappointment. This is because all of them, except the Great Pyramid of Giza, have left nothing but remnants.

It’s a shame that people of this modern age weren’t able to see the magnificence of the seven wonders of the ancient world. All that’s left of them are ruins and relics of the once-majestic structures. But thanks to Budget Direct, an insurance company, we now have a chance to see what these landmarks look like. The company decided to reconstruct the seven wonders of the ancient world through 3D renderings. Architectural designers Keremcan Kirilmaz and Erdem Batirbek worked alongside NeoMam’s art director to come up with the design. By using the Hellenic guidebooks as guides, designers were able to render what the structures look like in their prime. To give the design a photo-realistic rendering, Fractal Motion’s graphic artists create a lifelike reconstructions of the ancient landmarks.

Take a seat as we transport you to the past where all the seven wonders of the ancient world are standing proud in all their glory.

The Seven Wonders of the Ancient World 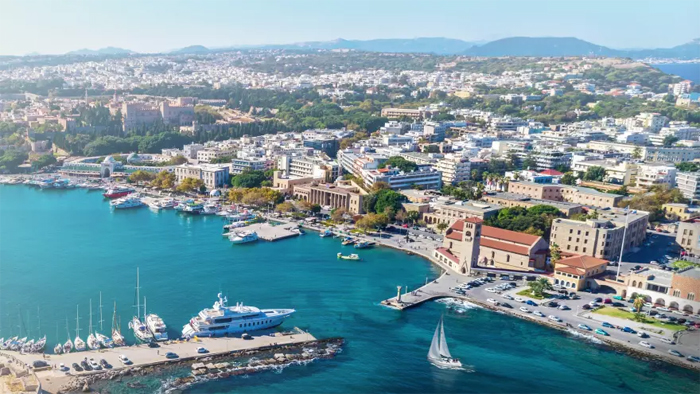 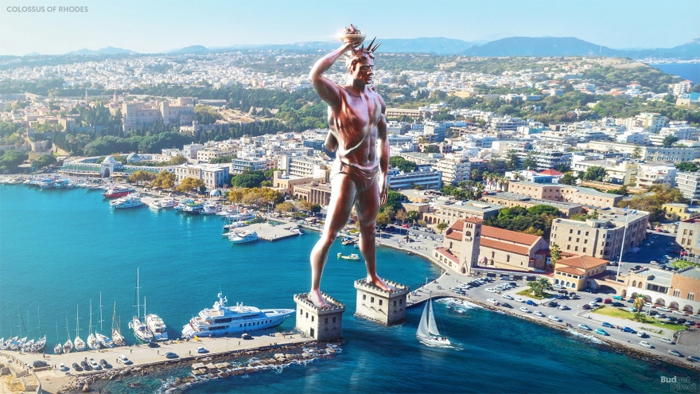 The 108-feet statue of the Greek god of sun Helios stood on two pedestals over Mandraki Harbor in Rhodes.  The Colossus was a symbol of triumph for the Rhodians against Cypriot’s army in 304 BC. In order to commemorate the victory, the Rhodians melted down the enemy’s arsenals and build a statue out of it. The gigantic Colossus remained standing until a powerful earthquake toppled it down half a century later. When the Arabs invaded Rhodes 800 years later, the fallen statue was melted down by a Muslim caliph and sold for scrap. 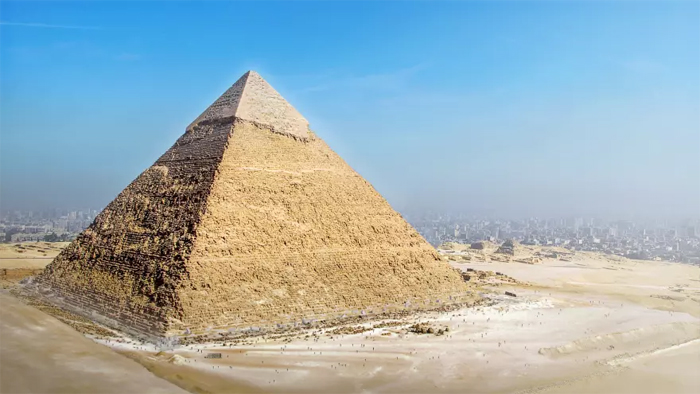 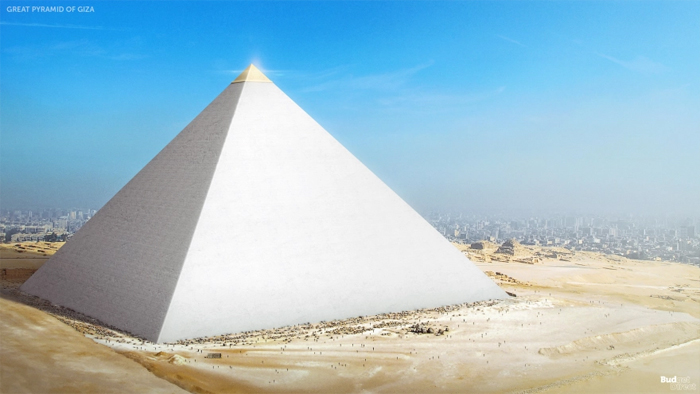 Since this 481-feet pyramid was constructed in Egypt, it had stood as the world’s tallest architectural structure for almost 4,000 years. Not until the Lincoln Cathedral was erected in 1311. Since then, the record has been quickly passed on from one skyscraper to another. These modern skyscrapers are impressively towering but none perhaps could equal to the grandeur of the Great Pyramid of Giza. This magnificent tomb was the product of bare hard work by more than 100,000 Egyptian workers without any machinery. The pyramid still stands in the Giza Necropolis as it consistently draws in tourists from around the world. And if you think it still looks spectacular now then you haven’t seen how it looks like in its heyday.

The second list of the world’s seven wonder came from the 19th century where the original sights were replaced by medieval structures. Then the third list came in 1994 where modern architecture of the 20th century was mostly featured. However, the next list came sooner than expected as unofficial lists begin to arise in 2006. Because of the confusion, the New7Wonders Foundation came forward with the official list of the new seven wonders. The foundation decided to avoid what the previous lists have suggested. Instead of focusing on the latest trend of architectural design, the panel decides to include historical value as well. Among the original list, only the Great Pyramid of Giza was chosen as one of the finalists.

As one of the only surviving seven wonders of the ancient world, the Great Pyramid finally made it back to the list. Due to its remarkable stature, the foundation decided to grant it honorary status instead of including it to the list. 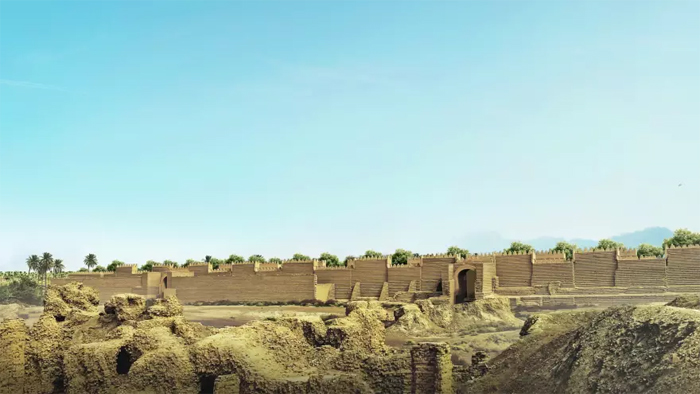 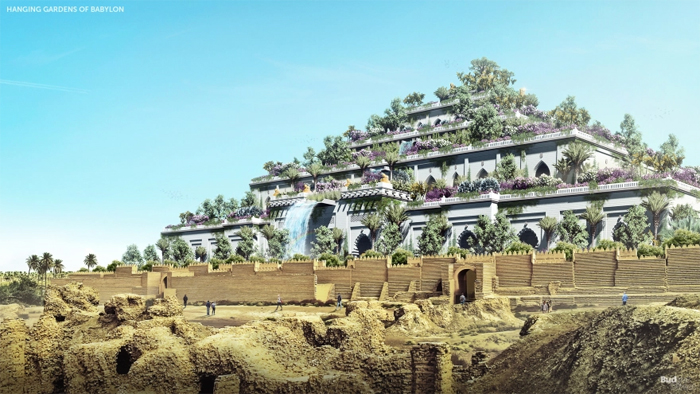 Historical analysts are still uncertain about the existence of the Hanging Gardens of Babylon. Did it really exist or was it just a fragment of the writer’s imagination? Whatever evidence that may proof its existence is long gone. And even the native writers of Babylon did not mention it in their writings. But according to stories, the garden was built as a gift from Babylonian King Nebuchadnezzar to his wife, Amytis. And if ever the legend was true, the Hanging Gardens must have looked like a splendid architectural feat. 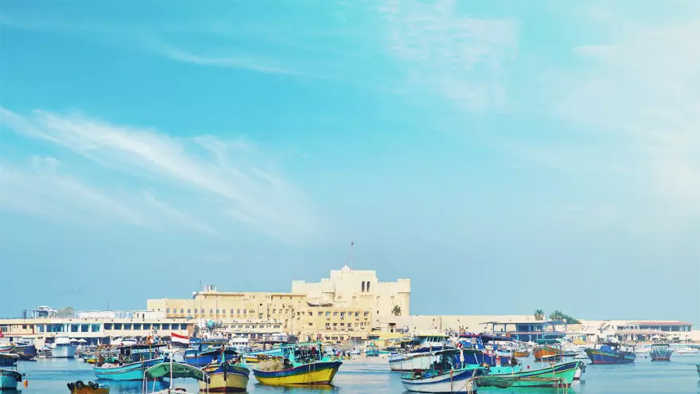 Built in 300 BCE by Sostratus of Cnidus under the commission of Ptolemy I, the Lighthouse of Alexandria is said to be the first lighthouse ever existed. It stood 330-feet tall flaunting a square level bottom, octagonal level middle, and a cylindrical top. However, a powerful earthquake between the 12th and 15th century caused its destruction. And the ruin was turned into a fort by Maml?k sultan Q??it B?y. 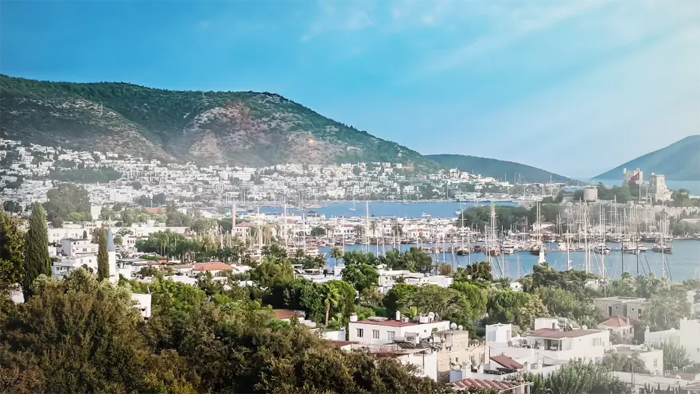 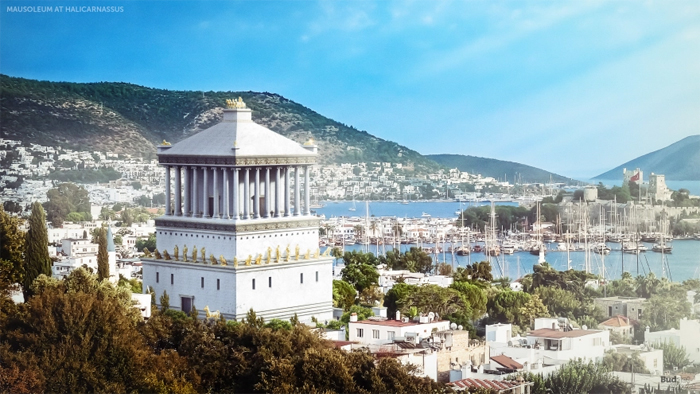 Did you know that the term ‘mausoleum’ was coined from the king of Caria, Mausolus? It all started when a spectacular tomb was built for the king in 350 BCE. The magnificent 148-feet tall tomb became so popular that the name of the king was used to describe funeral monuments. Since then, massive tombs that feature impressive architecture has been referred to as mausoleum. Unfortunately, the Mausoleum at Halicarnassus collapsed due to a series of violent earthquakes in 13th century. 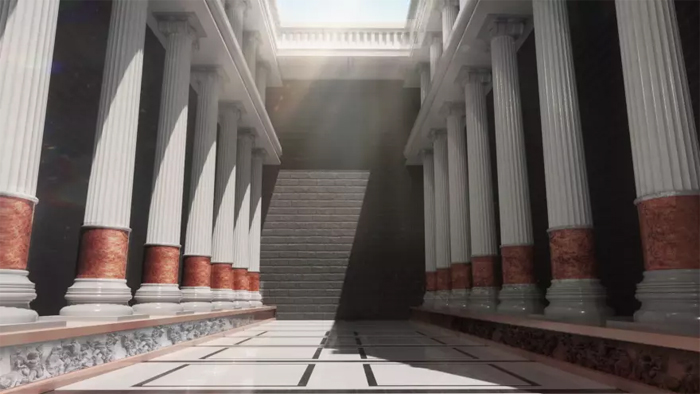 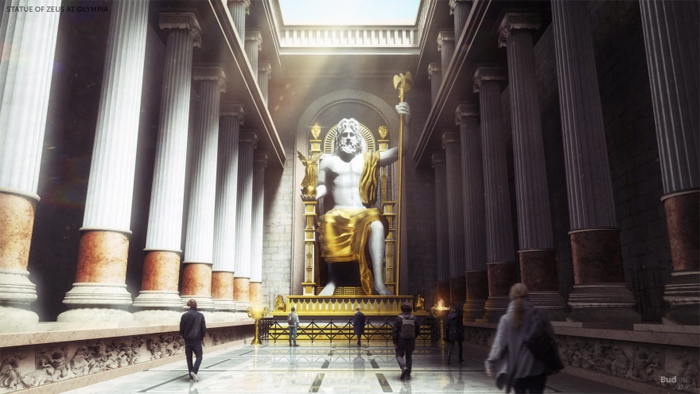 Zeus is the mightiest of all Greek gods but even he can’t triumph over the test of time (and fire). The Eleans built a majestic statue of Zeus to outclass the Athenians. Indeed, the 40-feet gold-plated statue of Zeus sitting on his throne is an outstanding monument like no other. It could have lasted forever if not for one fatal mistake. The builders used wood for the framework and throne. So, when the temple was demolished in 426 CE, some parts of the statue went down with it. To make it worse, a huge fire engulfed the Constantinople a few years later which resulted to its total demise.

Temple of Artemis at Ephesus 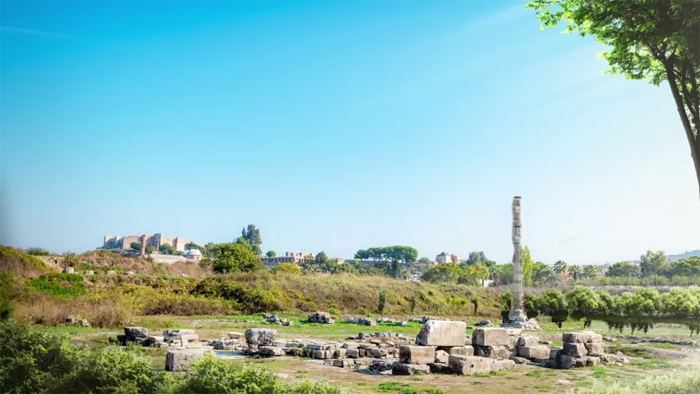 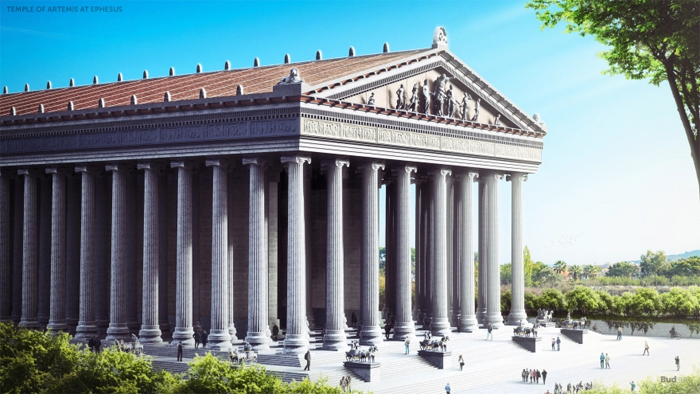 If you visit the place where the Temple of Artemis was erected, you’ll only find a single column surrounded by scraps of stones. That’s the only thing that was left from the splendid temple that was once built there. The monumental temple was a tribute to the Greek goddess of the hunt, moon, and chastity. But the most notable thing about this temple was the attempt to destroy it – three times. The first attempt to take it down was done by a notorious arsonist Herostratus for the sake of getting famous. Whatever that is left from the fire was later smashed by the Goths while they were on the run from the Romans. As if those weren’t enough, a Christian mob left nothing but a single column of it in 401 CE. Amazingly, the iconic single column still stands today serving as the only memory of the ill-fated temple.