Too bad for many of us, Australia isn’t just wholly a place of friendly neighbors, adorable koalas, and sweet kangaroos. This nation can even sport itself among the most dangerous countries on Earth. Instead of calling it the Land Down Under, one may call it the Land of Nope. Well, it has most probably earned this reputation by merely being home to naturally dangerous creatures. Some of these scary animals in Australia are quite creepy, while others simply are savage.

To give you a picture of this reality, we’re showcasing 40 images of the ruthless natural hazards. Once you see them, you will unarguably run for your life!

1. A Megabat Native To Australia — The Flying Fox

This bat was just fine; he wasn’t really sick. He was drying himself. When the night-time came, he finally flew away!

Well, the Great Southern Land can offer you anything you could associate with a nightmare. For instance, Australia has octopuses full of venom, crocodiles that are the most ferocious, and super sly snakes. It even has plenty of earthworms that group themselves together in disgusting imagery.

From the looks of these animals, no one could say they’re not terrifying. And yet, who knows how dangerous these creatures can actually be?

2. Giant Lizards Are Among The Scary Animals In Australia To Watch Out For

Out of the 170 snake species thriving in Australia, 100 are in fact poisonous. And yet, here’s something even worse than that fact — 21 out of 25 of the world’s most venomous serpents are living in Australia! It’s no surprise, then, that 2 to 4 people would be killed by snakes each year here. In all of Asia, though, snakes kill 11,000 people annually.

3. This One Is Just Among Australia’s Least Dangerous Spiders

It’s called the huntsman spider. He’s quite a familiar friend to many gardens and houses throughout the country. His massive size can be intimidating, but he’s really harmless — unless you tease him. Under provocation, he might also bite, although he’s without venom.

Well, the huntsman spider’s presence in your home can actually be beneficial. With his agility, he can bring the population of cockroaches under his control. So, he could actually be a pet. If you let him have his own space, he can look after you like a trusty guard, as well.

Still, the question remains. Why do some people don’t seem to panic around snakes but get shaky when faced with spiders? We won’t try to explain that here. It’s just that, in Australia, you could 2400 different species of arachnids! One of these is called the Sydney funnel-web spider. It’s really deadly since any person it would bite could die within only 15 minutes! This spider is, in fact, part of the world’s deadliest arachnids.

4. Meanwhile, Something To Witness In Australia

This is the olive python (Liasis olivaceus). It’s the largest python in Western Australia.  And, it’s feeding on an Australian freshwater crocodile, with scientific name, Crocodylus johnstoni.

Of course, not every foreign spider you encounter is going to be a threat to you. The good news is this: there are only under 50 spider species in Australia that could be a real threat. Recall the fact that most spiders are actually friends of mankind. Part of their role in nature is to control the population of many native insects, putting it down.

Now, these little pieces of fortunate facts do not necessarily lessen the impact of the really scary animals in Australia. Yes, this country’s spiders are still pretty threatening — even from the looks. If one has arachnophobia, it might be best to avoid traveling to Australia in the summer. He has to overcome the fear first!

5. The Araucaria Pine Cone — This Might Kill People When It Falls

On the other hand, sharks in Australia are known to kill approximately 2 people annually. Its crocodiles have also been recorded to victimize 14 people between the year 2005 and 2014. Now, do the math and compare that to a 33-year record of 10 deaths before 2004.

Still, animals are only one form of harm in the country. It also has gigantic pine cones weighing 10kg each! It also has hailstones the size of a tennis ball! These can severely damage an unprotected head. So, when you visit Australia, you may as well look around and watch out for any threats. Or, you could just wish you were someplace else, safer and less stressed!

6. You Sure You’ve Been Lifting?

By now, you would have understood why Steve Irwin, the well-known Crocodile Hunter, and zookeeper, is a man from Australia. One of the bravest in human history, this man would have trained himself naturally in a country where danger and threat abound in every corner around.

This guy, Nifty, is around 6m long. He and many of his kind live in the rivers in Darwin, Australia. Imagine — they could also be in other parts of the country!

11. You Can’t Read This Electricity Meter Because Of The Spideys

12. Strangely, These Toads Are Riding On A Python

This happened when 68mm fell at Kununurra, flushing the cane toads of someone’s small dam. Some toads found a way to survive! Hence, this image of them riding on the back of a python that’s 3.5m in length!

14. A Hot Pink Slug Found Only In An Isolated Forest Of An Extinct Volcano

15. Frog Eating A Snake — Something That’s Already A Trademark Here!

16. Meanwhile, In A Shop In Australia 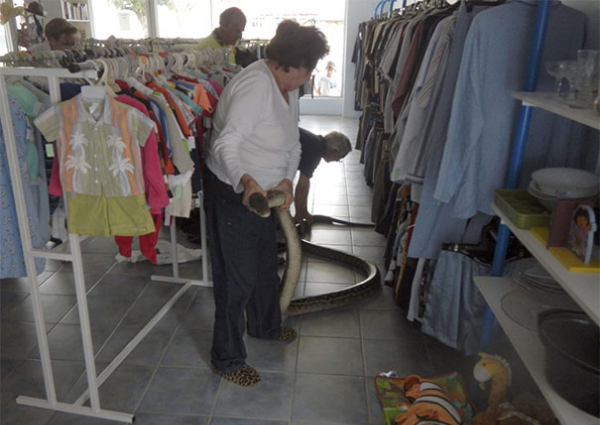 19. Filling Up Your Fuel Tank Could Also Kill You Here

20. What’s This Creature Doing On The Beach?

It appears to be anemone. Well, indeed, it is. Found in Broome, Western Australia, this Dofleinia armata is known as the armed anemone or the striped anemone. It’s a hazardous animal! If it stings you, it could take months for you to heal!

21. If You Plan To Hike In This Very Spot, Take Note What This Sign Actually Reads

22. A Road-Side Ditch. Yeah, This One’s A Typical Situation

23. Why You Need To Check Your Shoes First In Australia

24. The World’s Second Most Poisonous Snake Inside A Kid’s Lunch Box

26. Be Sure To Check Your Toilet While In Here!

28. Even Your Ceiling Lamp Could Kill You Here

29. Australia Is Where Insects Can Be As Huge As A Mammal

30. Something You’ll Find In Your Back Door But Only In Australia

32. Nature Can Be This Scary In Australia!

This is actually a termite mound found in the northern part of the country. Termites, in fact, are capable of building the tallest structures among all the other creatures on the planet. On a person-to-building scale, humans would have to build around 6.2 miles or 10 km to make the equivalent. Termite mounds are even stronger than the cement we use!

34. Something You Could See During A Holiday In Australia

35. Australia Is Where Frogs Eat Snakes

36. Ogre Faced Spider That Casts Its Net, Waiting For Its Prey