We’ve been living in our pajamas, loungewear and pajama-formalwear-hybrid getups for nearly a year thanks to the pandemic. And apparently, Target wanted to change that… with prairie dresses. It didn’t take long before someone spotted the prairie dresses hanging on the racks. But the reaction wasn’t what the designers were probably hoping to get. See, instead of raving over the dresses, the shopper couldn’t help roasting them instead. To the shopper, the dress looked like something a person who “just lost the farm after locusts ate their crops” would wear. This hilarious observation made the dresses fly off Target’s racks faster than you can say ‘prairie dress’. Then people created dozens of surprisingly hilarious photographs.

Folks living near a Target location got in on the prairie dress roasting. But the biggest plot twist of this hilarious challenge has got to be how it became an event not just for ladies but also the gents! In fact, some of the best shots contributed to the challenge were from couple Bre and Matt Bogert. The couple’s entry to the #TargetDressChallenge featured Matt donning the dress in all his 6’8” tall, 300-pound glory. Their submission is among the most popular in the challenge, having gained over 5.8K reactions, 1.1K comments and 3K shares! In an interview, Bre shared the events that led to the epic photoshoot.

“Target has decided if we’re gonna suffer a pandemic, we might as well look like we just lost the farm after locusts ate our crops.” 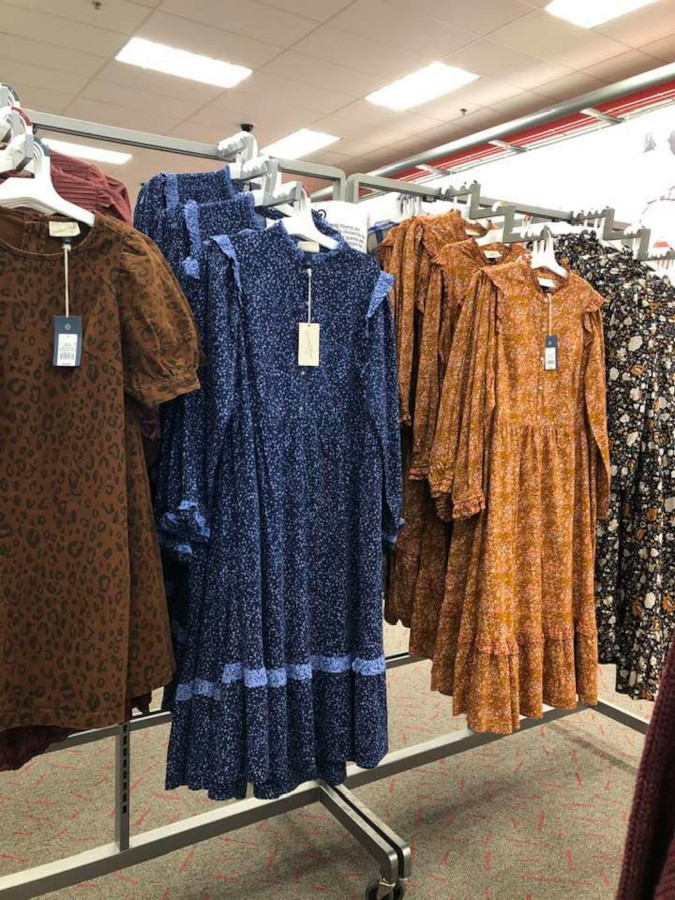 Bre and Matt Bogert’s journey to joining the #TargetDressChallenge started when Bre stumbled upon one of the earlier entries while she was browsing one of her farm or chicken-related groups on Facebook. She instantly recognized the dress, having seen it hanging on Target’s racks before. Normally, it wouldn’t have baffled her, but something about the picture had her doing a double take. She excitedly showed her husband the picture, and the couple had quite a laugh over it.

“No chickens were harmed during this photo shoot.” 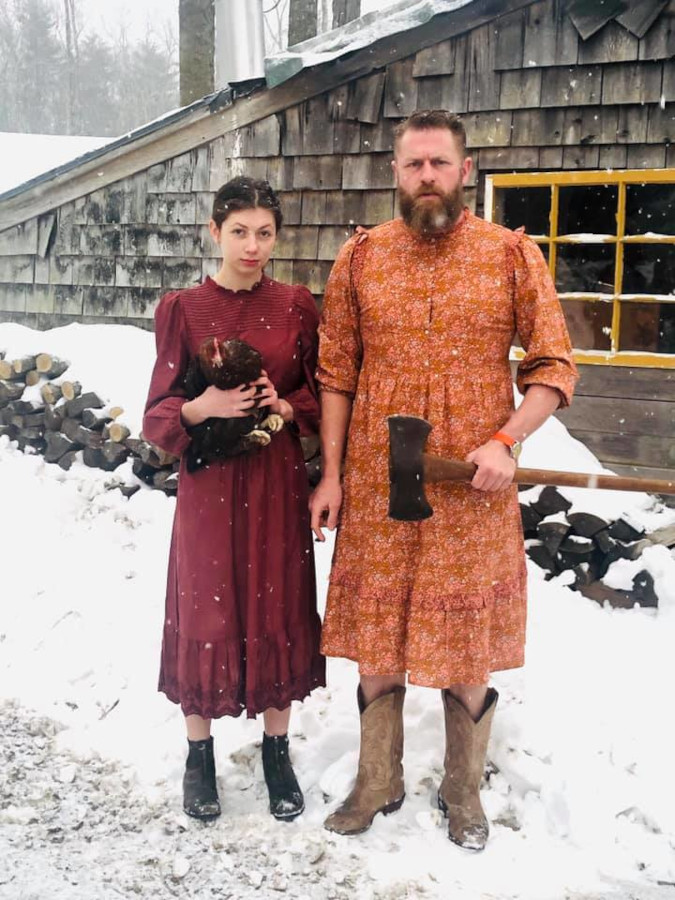 “It all started with a post that went viral, someone had made a silly remark on a certain style of dresses at Target. Then, some people in one of the most fabulous chicken groups I’m in caught wind of it and ran with the idea!” 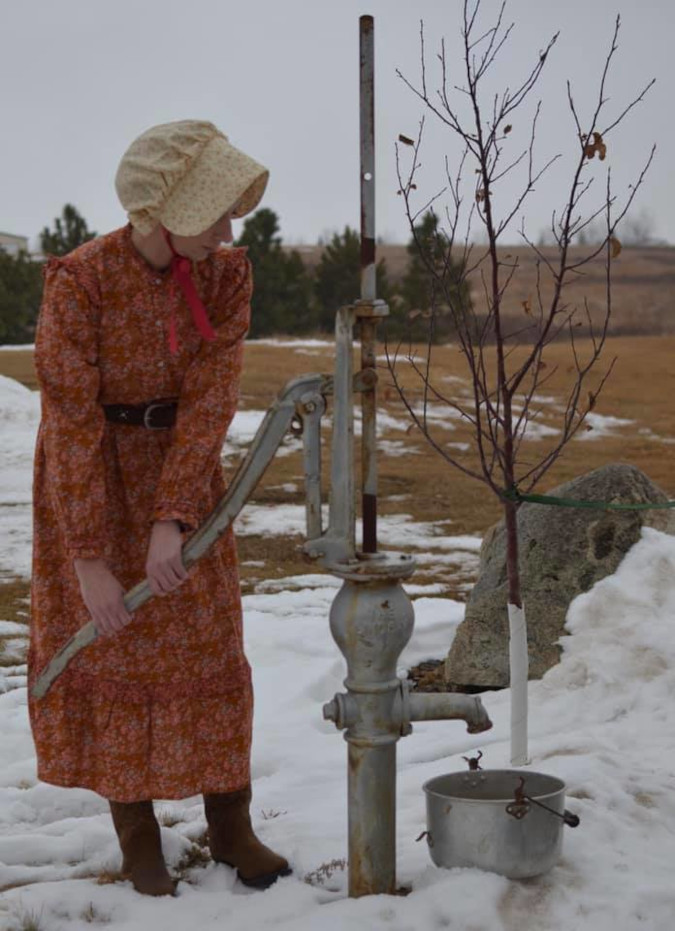 “My poor girls are terrified of this dress and ran away screaming, so I had to substitute.” 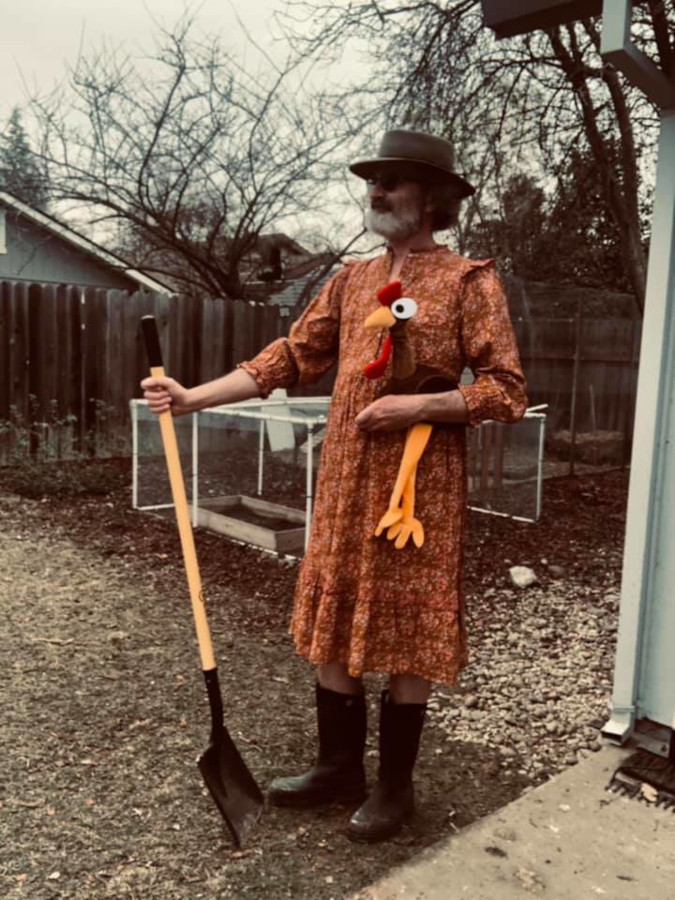 “Loggin’ – got plenty of firewood to last through the winter” 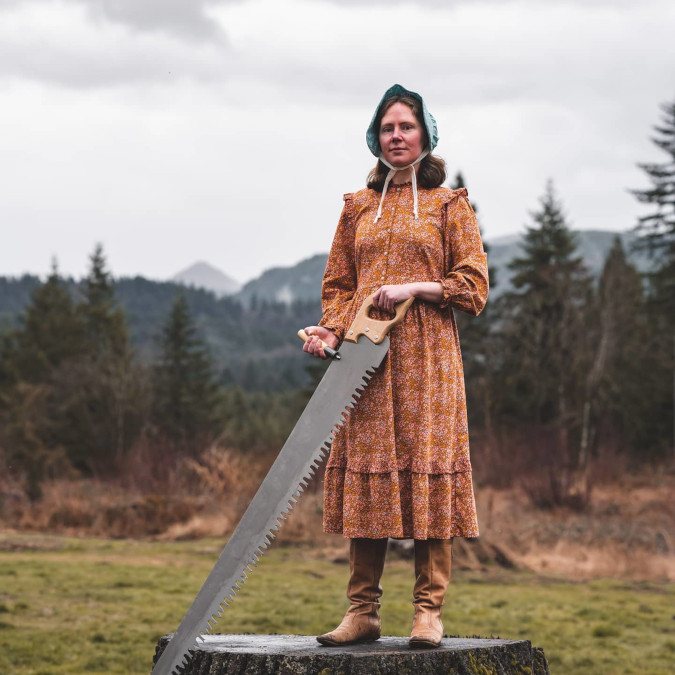 “People are taking these old fashioned dresses from Target and recreating old time moments by taking photos in the dresses… with their livestock.” 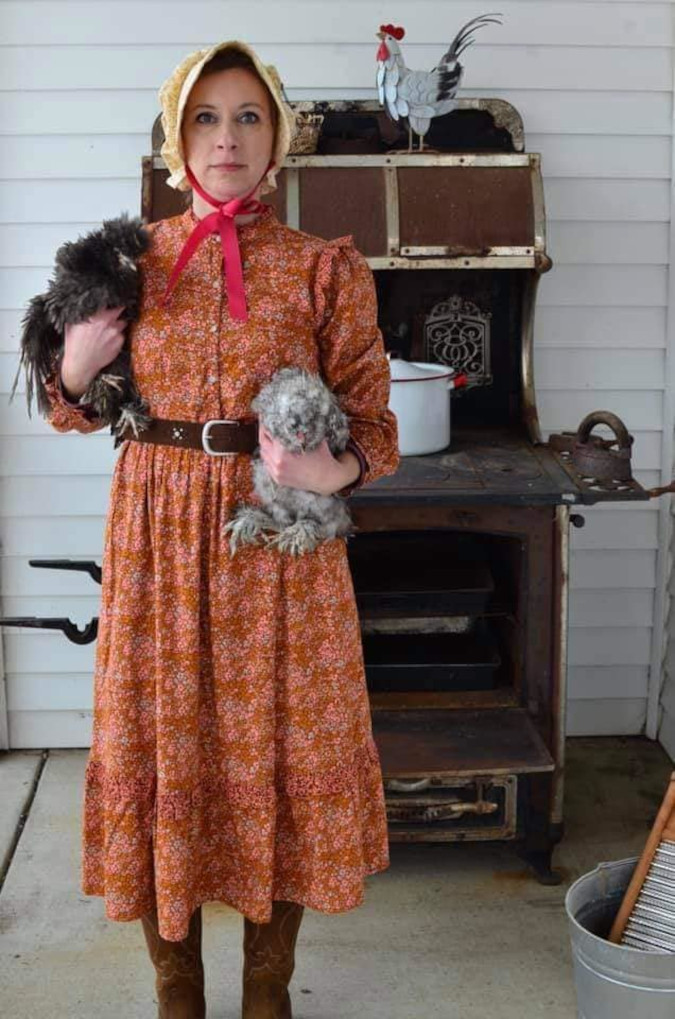 Matt Bogert – and many other fathers, husbands and brothers –  got involved in the roasting too

After stumbling upon the picture of someone else’s husband donning the now infamous Target dress, Bre immediately asked Matt to participate in the challenge too. He initially tried to refuse, but when their 8- and 10-year-old sons saw the shoots, they immediately joined Bre’s campaign. Their eldest son won his father’s participation by asking Matt to do the challenge as his birthday present. And so, the doting dad ended up slipping into a floor-length XXL prairie dress that showed a bit of skin. Bre shared:

“My almost 10-year-old asked him to do it for his birthday present (we did the shoot on his birthday!) and off to Target we went! He’s 6’8” tall and 300 pounds – we didn’t think we would find a dress, and that XXL was a little stretchy and it fit like a glove. The dress was supposed to be floor-length, but as you can see, a little knee was shown. The meme we saw circulating about the locusts and losing the farm made us laugh so hard. When we saw those dresses in person, we HAD TO try. 75% of the shots I took were shaky because my boys and I were laughing so hard.” 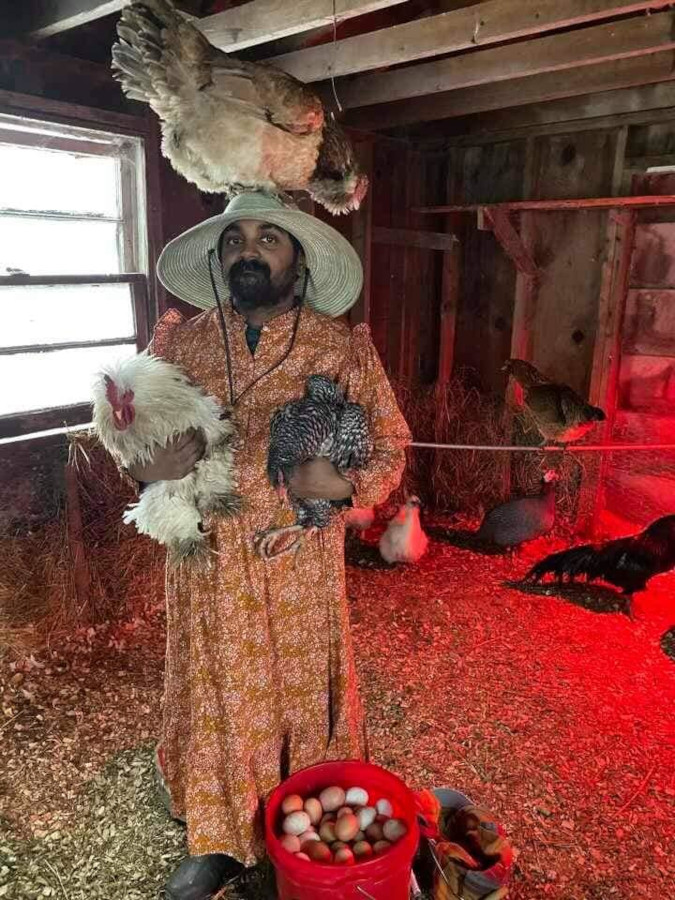 “The two aught two aught year of our Lord hath vexed me. I am vexed, I say.” 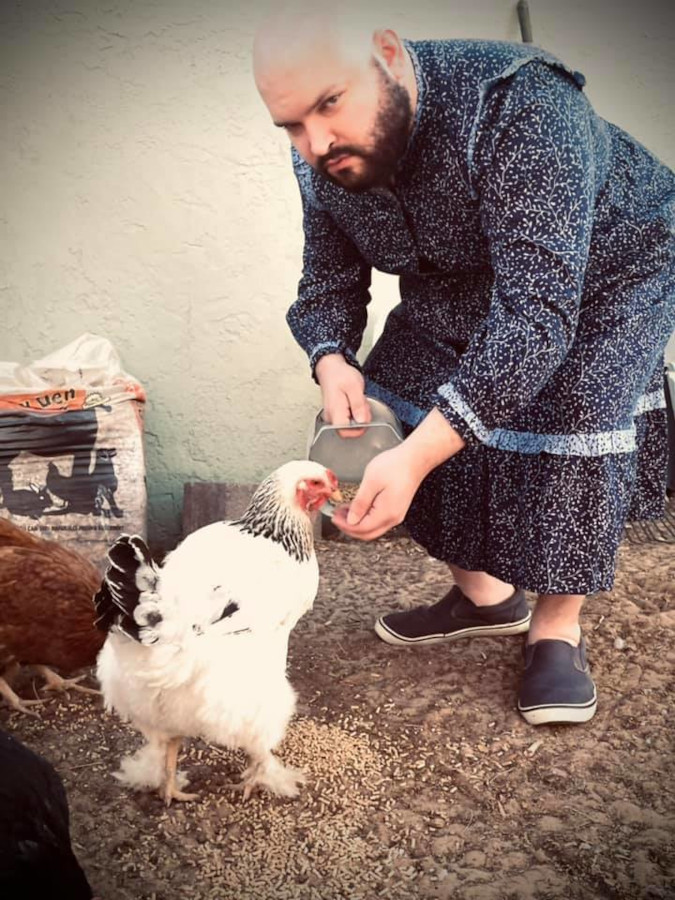 “Amazingly, he saw the dress hanging after being washed and came up with the idea himself, no inspiration or alcohol or coercion needed!” 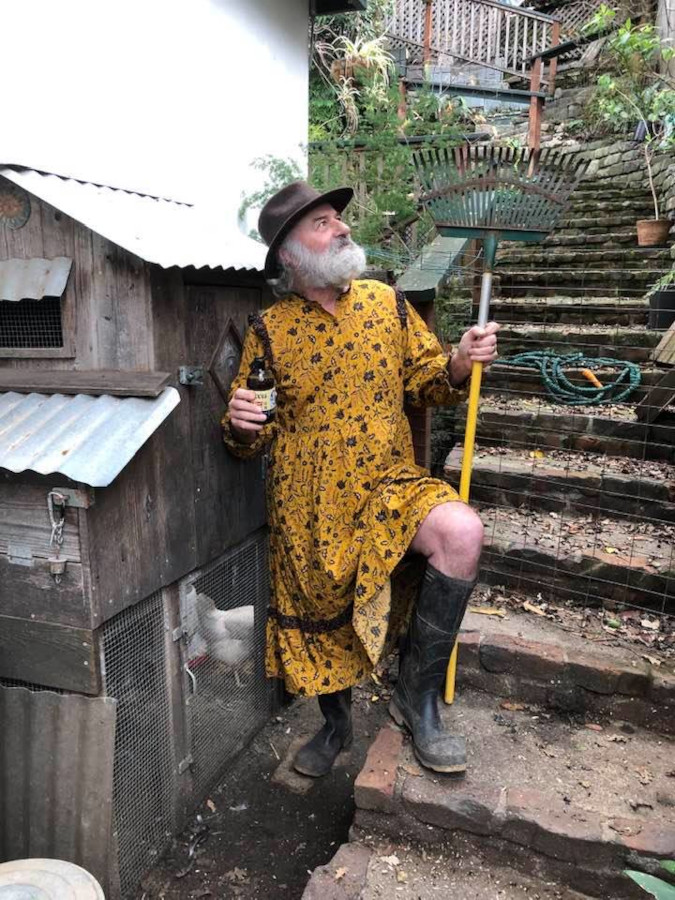 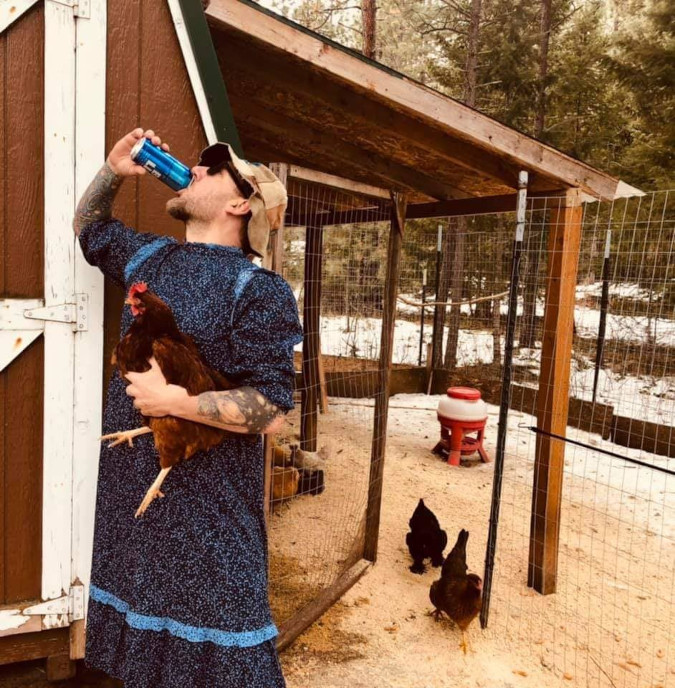 Even kids are joining in on the dress roasting fun

The Bogert family live on a farm where they keep various livestock like goats, chickens, rabbits and hounds. This was definitely an advantage for them, as they don’t need to scout for a location or buy props. However, Matt didn’t really go for the “locusts-just-ate-my-crops-and-now-I-am-sad” vibe that the challenge required. Instead, the indulging dad struck his cheekiest, most enthusiastic poses all while cradling a black hen! According to the couple, the #TargetDressChallenge was definitely a much-needed outlet for them. They, just like everyone else, have had to go through some pretty hard times and it was really good to have a reason to dress up and laugh.

“My husband’s family had been through a rough time recently with losing loved ones and once we realized how much joy this was bringing and light-hearted fun, the deal was sealed.” 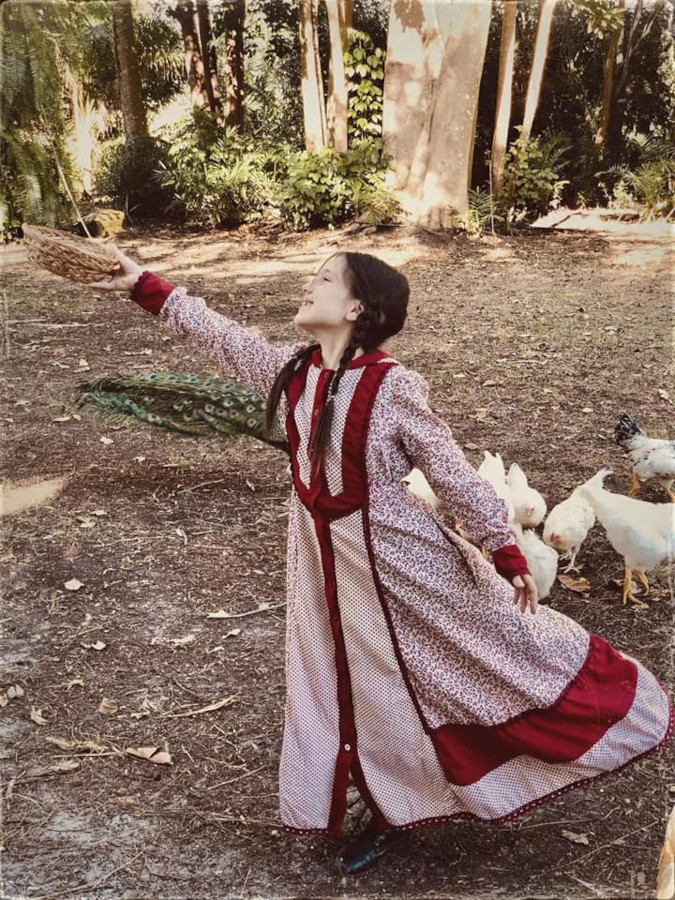 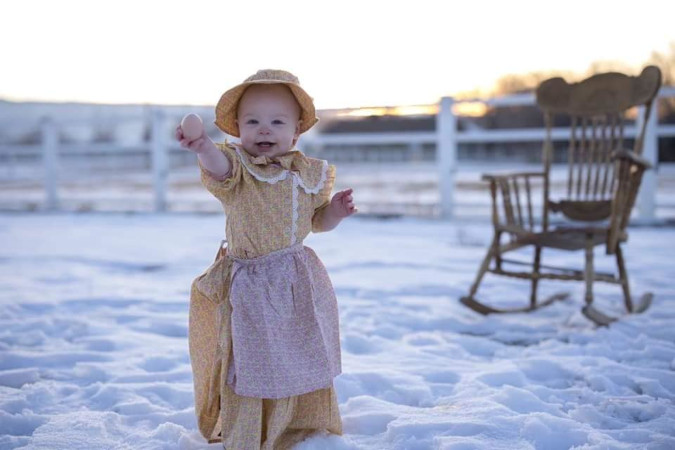 “We thought it would reach a few folks outside our chicken and farm groups, but not like this! 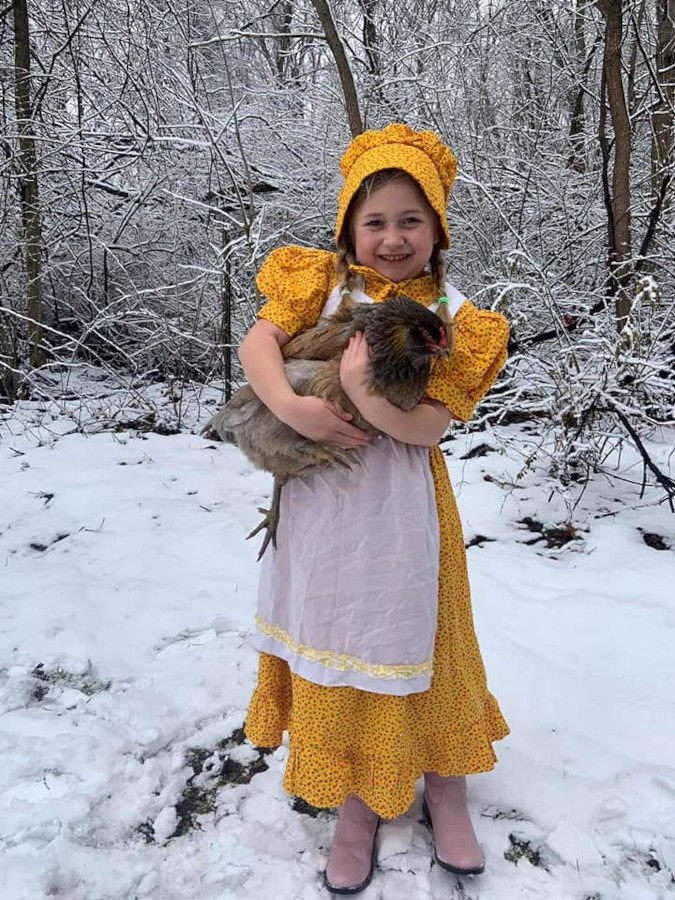 Once published online, the pictures both shocked and amused the couple’s relatives and friends. Then, all of sudden, the pictures became one of the roasting event’s top submissions. This led to them receiving torrents of messages from amused folk all over. Bre was definitely surprised, but she’s glad that it’s made a lot of people smile.

“We have had some very complimentary messages about my adorable husband (he’s taken, ladies, sorry!), but the best messages have been from folks who appreciate the humor in these isolating times.” 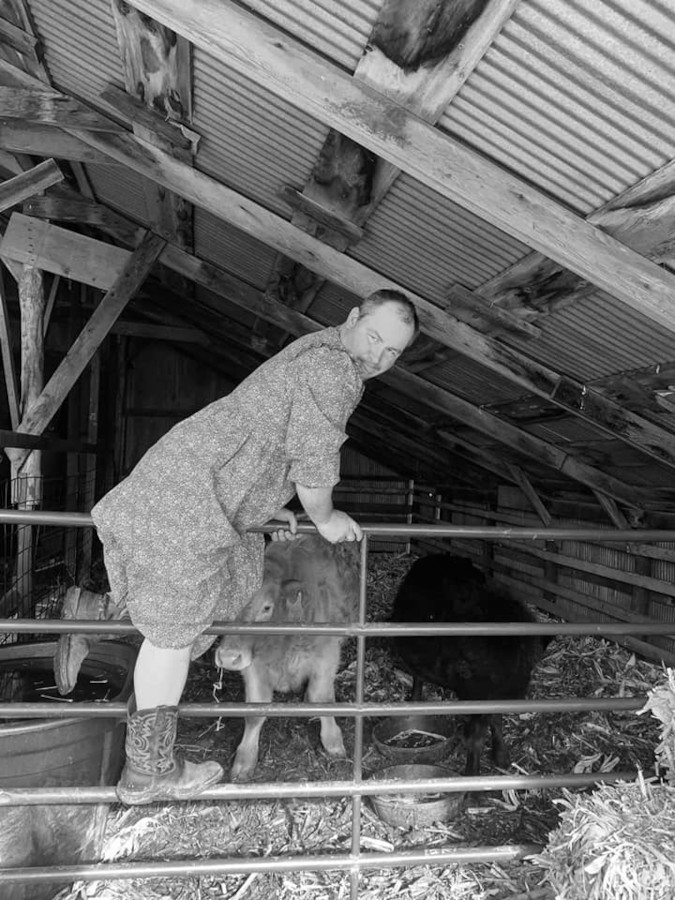 “Journal entry 324: another day in the life on the homestead while on lockdown. Made myself a new apron and a bonnet. Recently the town accused me of witchcraft and only spared my life because they believe I can conjure up some cure for this virus. At least now I can fly my broom around in peace.” 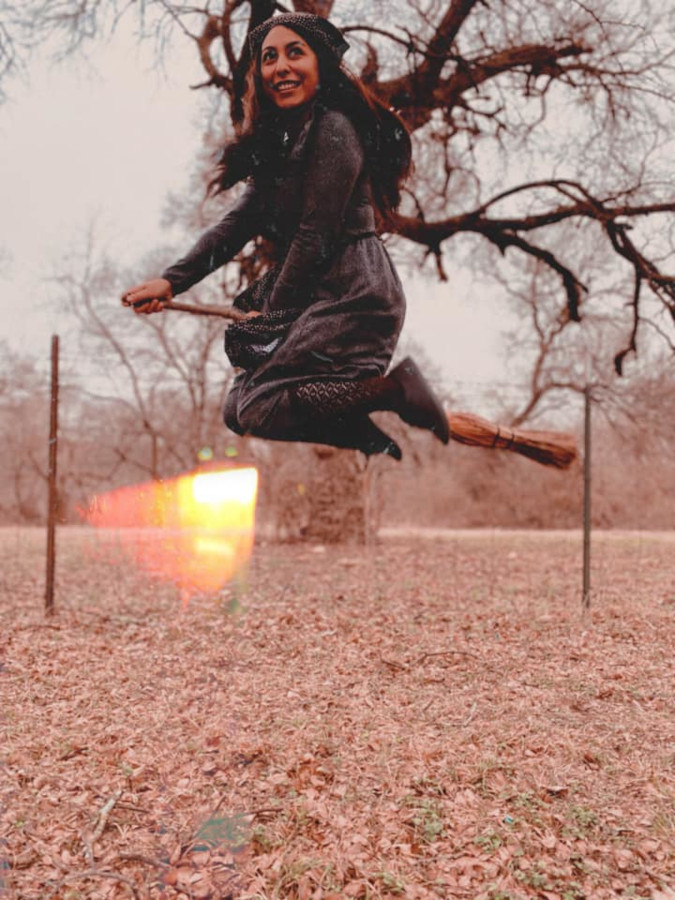 “My whole family thinks I’ve completely lost it (and maybe I have), but I surely hope this makes someone’s day.” 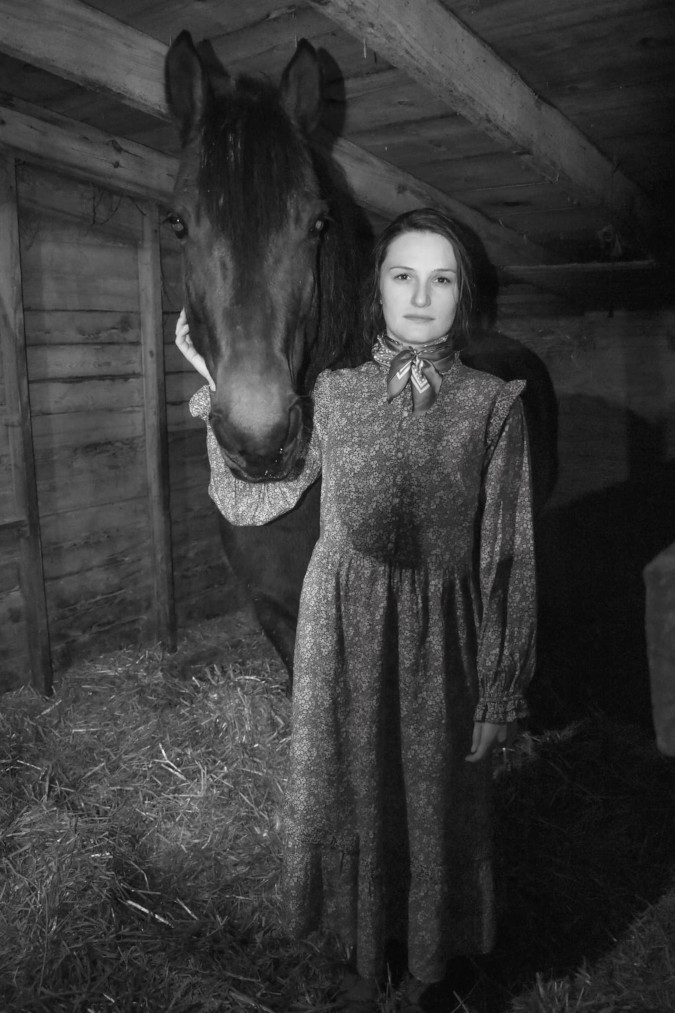 “I really like the “TARGET DRESS”.. And I personally think I rocked it” 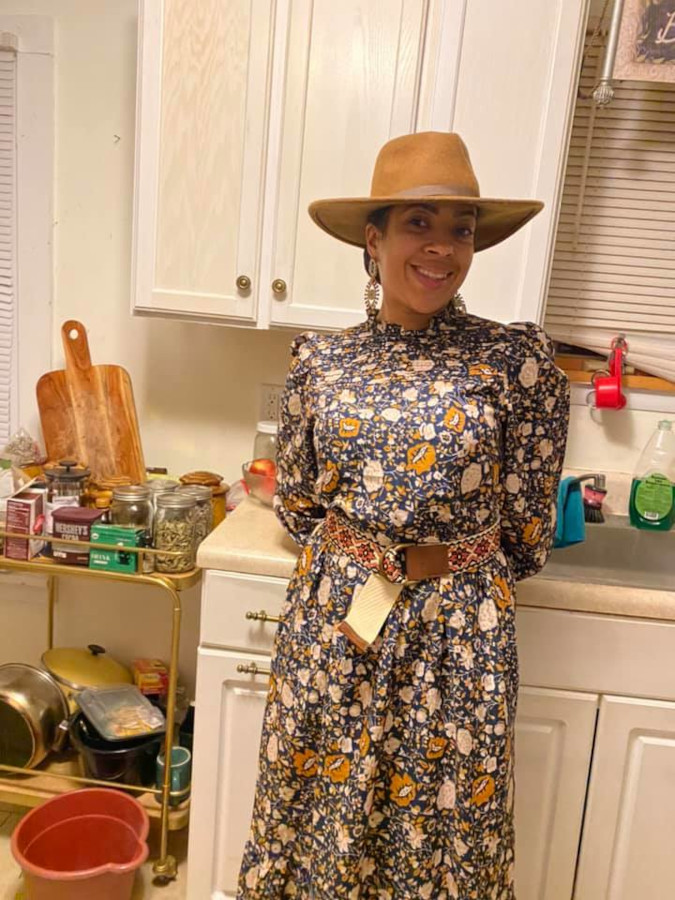 The challenge has entertained thousands

Despite it’s oddness, the #TargetDressChallenge has managed to lift the spirits of people all over the country. In fact, Bre and Matt reported that aside from appreciation messages, they also receive heart-warming messages from people who hadn’t laughed in a long time during the pandemic. The couple hadn’t anticipated the response they would get from the outside world. But Bre and Matt are happy to help people cheer up.

“Some said that this was something they needed to see on a particularly hard day, and just thanking us for sharing some joy.” 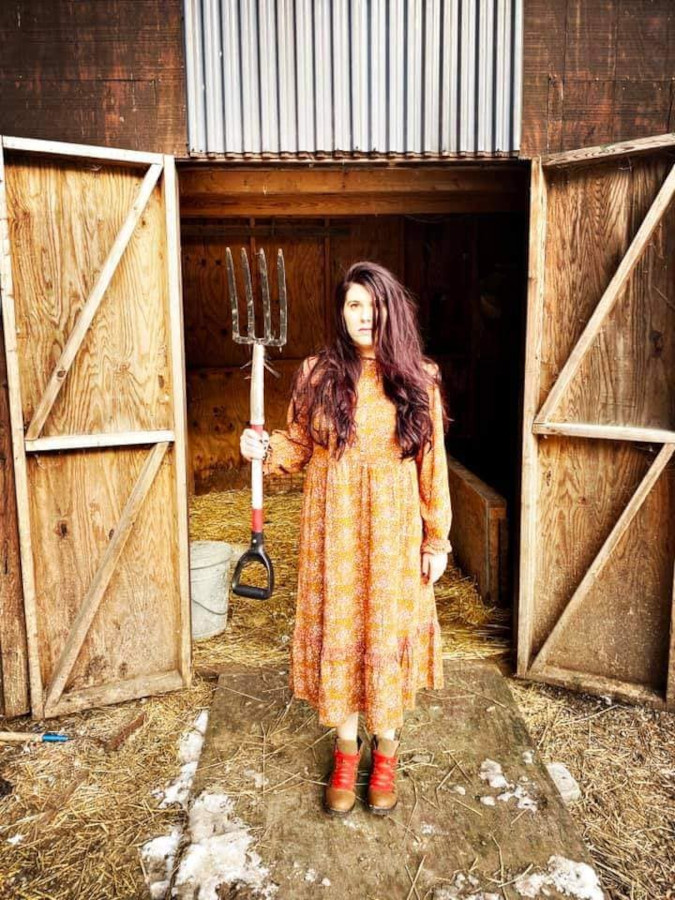 “My husband and I both agree if we can make anyone’s day brighter (even if it’s him in a dress with our chickens or goats as the cause), then it’s a great day.” 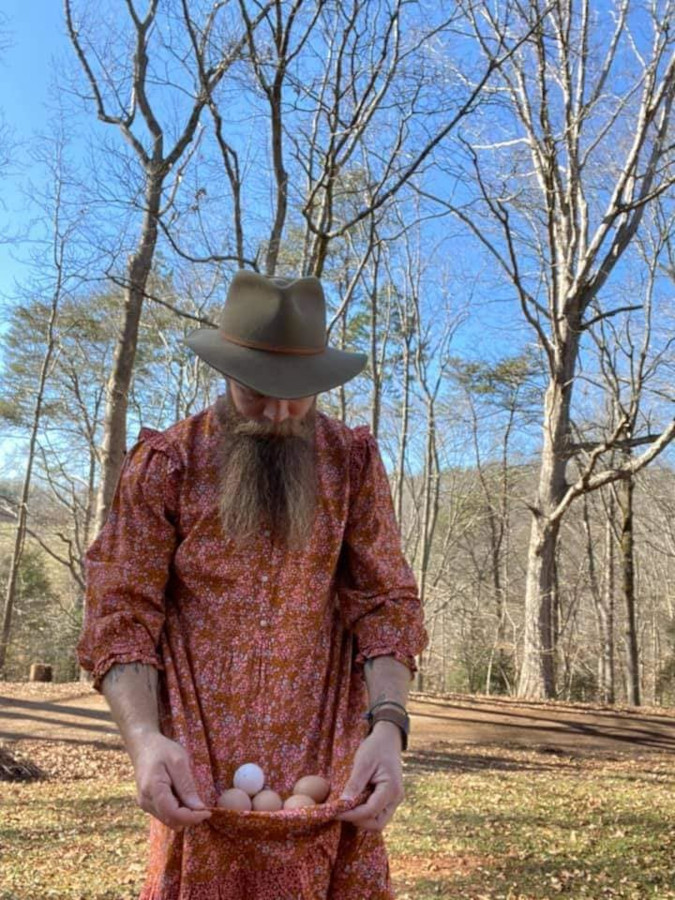 Some folks have offered to buy Matt’s dress

“Other messages were from folks wanting to buy the dress (we told them we are making it into pillows to always remember this shoot!), and some other chicken breed-related questions.” 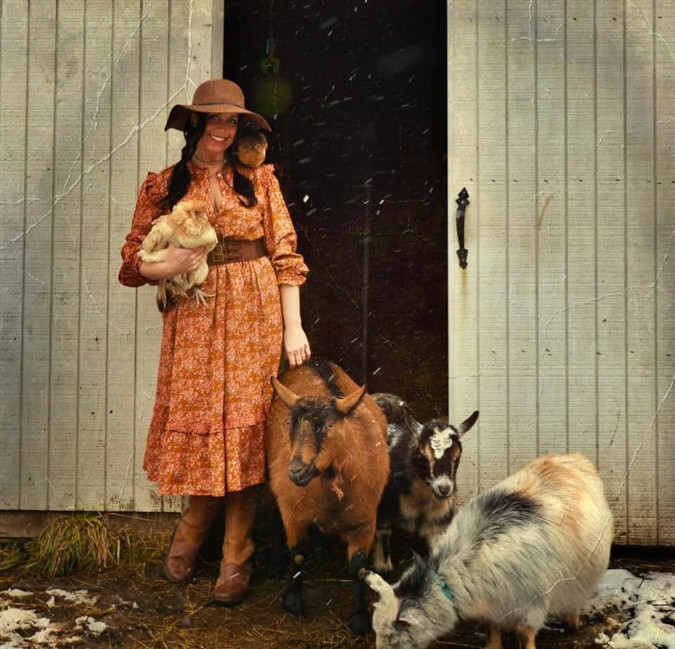 “It’s day 329 of the great plague. The Target Mercantile has blessed us with new fabrics to enhance our pandemic fashion. I feel Margaret got a little bit risky in her decision to flaunt that racy lace seam. After all we are modest women out on the farmstead. Unwanted stares from the menfolk is unholy.” 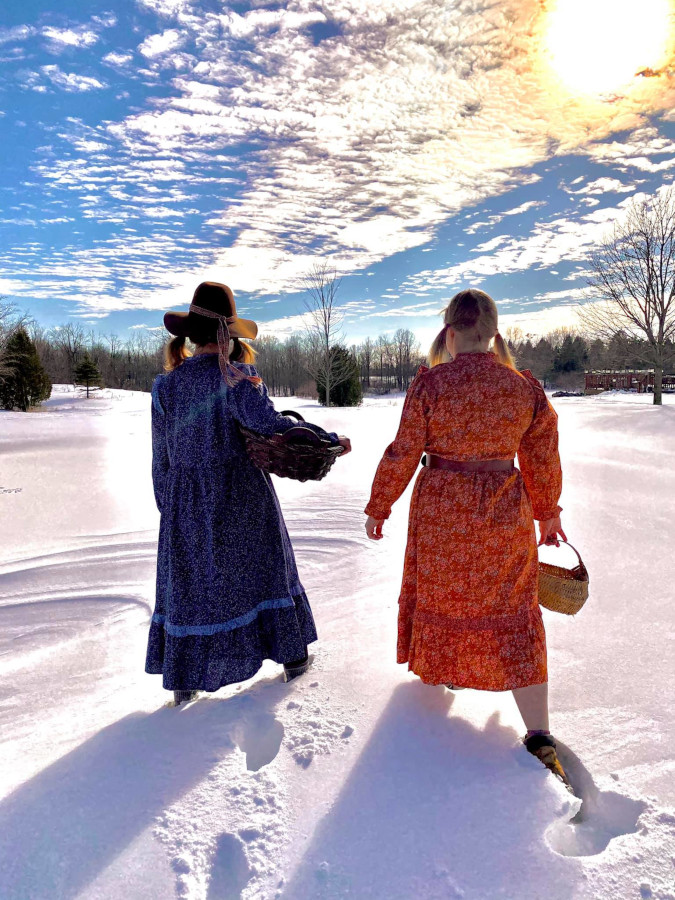 “We really wanted a Holy Bible for the shoot but roads are bad and I couldn’t get one from the dollar tree.”

“Quarantine day 329: Pa said if this winter holds out much longer he’ll need to butcher the hog… I don’t reckon I’m ready to say goodbye, but I’d be lying if I said I didn’t have a hankering for some fresh bacon. These grits ain’t cutting it, and dine-in just ain’t an option round these parts anymore.” 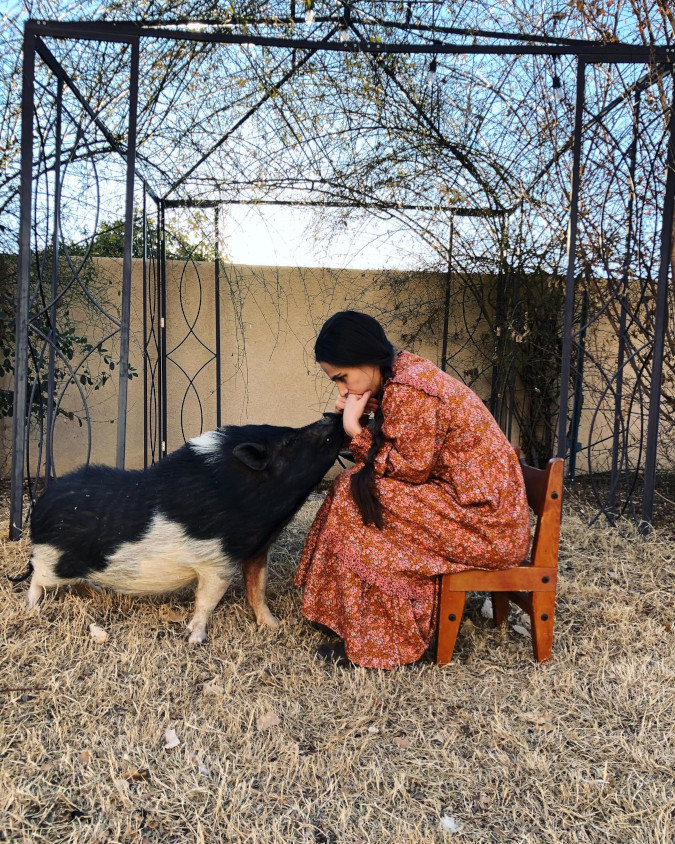 “Can’t believe I let y’all talk me into this!!” 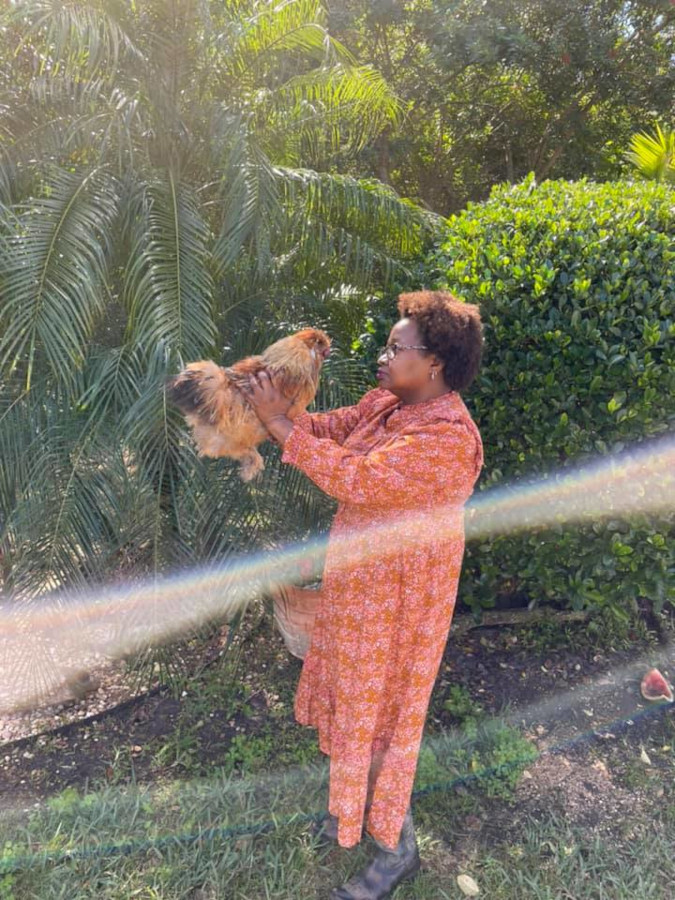 “Day 93 at the Wiggins Homestead: after putting the babies to sleep I gathered wood and finished churning the butter. After a little break, I done a little work on the farm and climbed a big hill. Thank you #target for making me a dress that is designed for my everyday chores.” 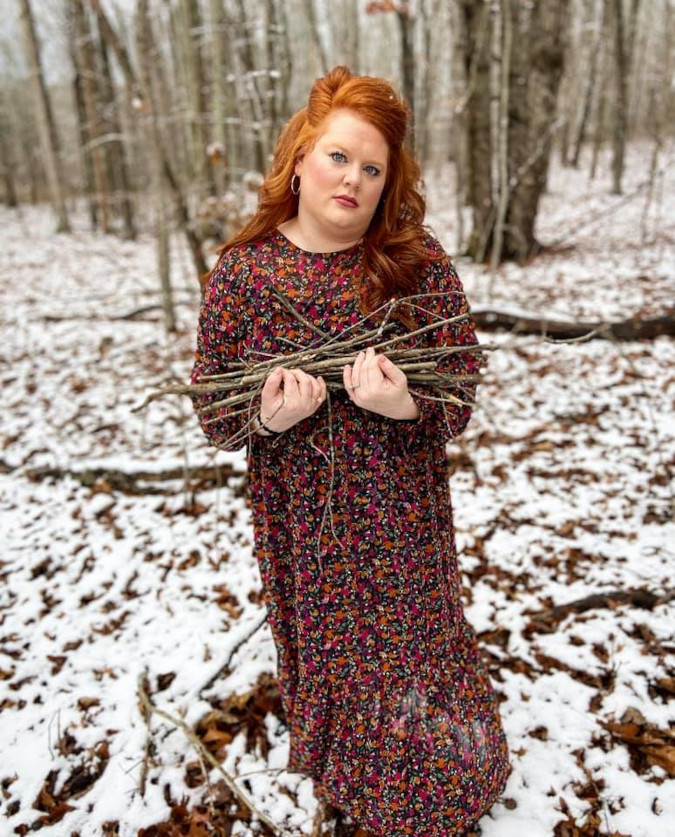 This challenge has made so many people happy

With all the gloom and doom that we’ve all had to go through, it’s understandable why a lot of folks find it hard to smile, laugh or just feel happy. That’s why we surely appreciate how this challenge, which was originally inspired by a someone’s quick-witted roasting, gave people a reason to dress up, get silly and make others grin from ear to ear. This is definitely one of the most wholesome roasting sessions ever to happen. Plus, we also love the fact that the challenge wasn’t reserved strictly for the ladies only! It was definitely a treat to see some gentlemen donning the now-iconic Target prairie dress!