Watermelon is the quintessential summer fruit. No beach- or poolside spread would be complete without it. The hot season typically brings about the rise of watermelon-flavored popsicles, ice cream treats and sips. So it’s safe to say that Trader Joe’s new, summer-exclusive Organic Watermelon Fruit Spread is an absolute gamechanger! Trader Joe’s refreshing take on our beloved summer fruit has got us tickled pink with excitement. Who would’ve thought that we’d see the day when we could spread watermelon on our toast? Some genius over at Trader Joe’s deserves a raise!

The retailer’s summer 2020 fruit spread offering has been making a splash in people’s shopping carts since early April. Which isn’t surprising, because we all know that we’ve got to snap up anything that hits Trader Joe’s shelves! Obviously, many found it hard to resist the new watermelon spread out of sheer curiosity. After all, life is too short to only know peanut butter and traditional jams! 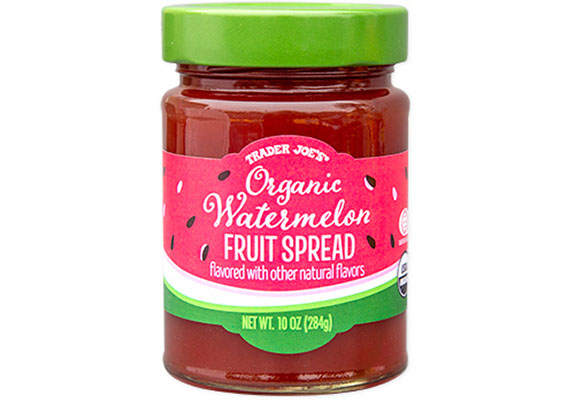 The watermelon fruit spread comes in 10-ounce jars dressed in a watermelon-inspired label and topped with a lid that resembles the fruit’s outer layer. But the most eye-catching thing about the offering is the pretty-in-pink jam itself! This watermelon-based spread features a bright, pink-tinged color that’s sure to look wonderful on anything it’s slathered on.

Watermelon Spread: 6.5/10 With watermelon products, it’s always hit or miss whether or not they will taste like fresh #watermelon or watermelon candy. This spread was extremely sweet and leaned more towards the artificial side because of all the sugar added. It tasted almost identical to a watermelon jolly rancher and the texture was jello like. While I didn’t hate the flavor of it, I definitely didn’t love. Compared to other amazing #traderjoes jams, I found this one to be less versatile. If you love sweet watermelon flavor, you could use this spread with goat cheese, on a bagel with cream cheese, or on top of pancakes or other breakfast items. It would also be good shaken up in ice tea or lemonade. A little goes a long way! Each jar is $2.69. Have you tried it yet? What do you think?

Watermelon. The “fetch” of Trader Joe’s.

The spread most likely owes its bright color from the 60% watermelon purée and some organic cherry juice concentrate. This spread also contains a combination of organic cane sugar and fruit pectin to give it that thick consistency. According to Trader Joe’s, the addition of the organic cherry juice concentrate gives the spread a zing of tasty tartness that’s sure to perk up your taste buds this summer!

Today’s easy breakfast with the ? new organic watermelon ? spread ($2.69) with a laughing cow cheese wedge ?? ($2.29 for 8) This spread/jam definitely tastes like watermelon but it tastes more like candy which I’m not complaining about ? It could use a little more depth (maybe some tartness or heat)but would also be great in yogurt, cottage cheese or cookie fillings ? Other flavor pairing suggestions with basil ? or the ? spicy pepper jam ??Please check out my stories ?? and Highlights for even more TJ’s items as well as new & fav kitchen items & swipe up to find out more info ?? ?? #traderjoesfans #groceryshopping #breakfast #brunch #yum #yas #traderjoesobsessed #watermelon #breakfast #newitem #cheese #traderjoeslove #traderjoesfinds #traderjoesrocks #traderjoes #traderjoesdoesitagain #traderjoeshaul #traderjoesinsider #traderjoesmusthaves #traderjoesfan #traderjoes #laughingcow

?Watermelon Surprise Pie? . Quick easy dessert, this pic does not do this dessert justice. Snapped it quick cause this girl is in week 5 of a mini cut and the hunger has been real! No time to waste here lol. . But really, this little cutie was delicious! I can’t wait to make it again. And it only has 311 cals! ?? I used a variation of @minitomighty yogurt whip but changed it up a bit and left out the peanut butter. . . . ? 1 @keeblerelves mini crust . ? 1.5 tlbs of @traderjoes Organic Watermelon Spread ? 18 g of lite cool whip . ? 170g Greek Non Fat Yogurt . ? 5g unprepared white chocolate SF @jello pudding mix . Take your mini pie crust and place 1 tlbs of the watermelon spread in the bottom. Mix yogurt, cool whip and pudding in a separate bowl and mix well. Place mixture in pie crust. Put the remaining 1/2 tlbs of watermelon jelly in a small bowl and add a little water so you can use as a drizzle topping. I then added a drizzle of @waldenfarmsinternational sf chocolate sauce on top. . 311 cals C42/ F6 P18 . . . . . #dessert #dessertideas #recipe #iifymrecipes #iifym #greekyogurt #watermelonspread #jello #coolwhip #keebler #pie #traderjoes #weightloss #caloriedeficit #minicut #flexibledieting #eatwhatyoulove #fitfam #macrotracking #food #macrocap

Been dying to try this @traderjoes Watermelon Fruit Spread and it’s a good one guys! ? . I made some 3 ingredient oat cookies by mixing 180g of bananas, 1 cup of oats and 20g of collagen. I dropped 6 cookies on a baking sheet with each one being about 43g each. I pressed down the middle of each cookie with a spoon to make a little indent to hold my spread. Baked at 350 for about 25 mins removed from the oven and added 9g of spread to each cookie. Return to oven for about 5-7 mins so spread gets warm and somewhat sticky. . You can add some sweetener if you like your cookies more sweet but the spread really sweetens things up ? . Makes 6 larger cookies each cookie cals 105 C19.9/ F1/ P4.9 . . . . . . #oatcookies #cookies #3ingredientcookies #oats #collagen #traderjoes #watermelonspread #iifymrecipes #iifym #macrotracking #eatingforweightloss #weightloss #flexibledietingrecipes #flexibledieting #easyrecipe #cleaneating #caloriedeficit #funfood #eatwhatyoulove #sweettooth #snack #snackideas

A taste of summer #traderjoes #watermelonspread

Trader Joe’s pretty-in-pink fruit spread is an absolute gamechanger. And it’s not just because it’s spreadable watermelon. It will definitely look and taste great over toast, but you can also use it as a topping for ice cream or even cheesecake! One shopper even used the watermelon spread to level up her oat cookies. Meanwhile, @gibbiblue took it up a notch by mixing the spread with her gin! Each 10-ounce jar retails for just $2.69 at Trader Joe’s. You’d better hurry if you haven’t gotten your hands on this summer special. The watermelon fruit spread will only be available while supplies last. So don’t let yourself miss out on this summery spread!