I think we can agree that Mountain Dew likes being the brightest, most eye-catching beverage choice in the soda aisle. The brand’s been releasing some gem-colored drinks, and it seems that they’ve got no plans of stopping any time soon. And rumor has it that they’ve got a chiller coming in blue, which happens to be Pantone’s Color of Year for 2020. Presenting the Mountain Dew Frostbite! Fans of the fizzy drink beat the brand to the big reveal thanks (or no thanks) to an overly excited insider.

Thanks to this info, intrigued fans created at a Reddit forum. There they shared their theories and concepts as to what they’re expecting from the new drink. One popular theory is that the drink “will be a rebranded White Out”. And since it’s been confirmed to feature a shark on the label, creative fans got busy trying to envision what the intriguing drink would look like. 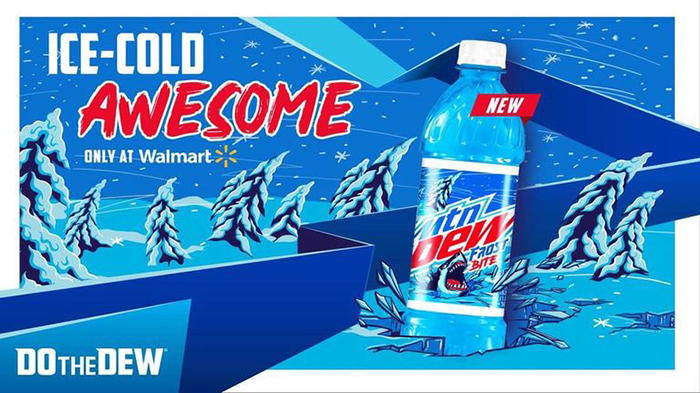 An insider leaked the news about the Mountain Dew Frostbite

Luckily, (for the Redditors, at least), someone managed to obtain an exclusive first look at the intriguing Moutain Dew Frostbite from an anonymous “insider”. The generous Redditor shared exclusive promotional material that showed the Frostbite soda and some tell-tale information. Fans can reportedly expect this blue Dew to hit Walmart shelves either in late March or early April. And from what we can see from the concept poster, the Frosbite flavor does feature a rather ravenous shark breaking out from ice. We’re definitely loving the clever design of this drink!

Someone pointed out that the name ‘Frostbite’ would make more sense if it were to be released during the winter. But another argued that it would be better to have during the hot summer months. Both make perfect sense, but we’ll just have to wait and see what the brand decides on. Sadly, with regards to its actual flavor, we all still remain in the dark. But fans are set on speculating about what they can expect from this chiller. Some are guessing that it’s going to be a combination of “snow berry and mint”. But White Out remains to be a prevalent choice as well. Hopefully Mountain Dew makes an official announcement soon, before we all turn blue from holding our breaths!