Missing Cat Has Been Spotted Near His Own “Missing Cat” Poster

Are you ready to get your daily dose of adorable cat stories? Get ready to laugh out loud with this supposed missing cat that turned out to be just fooling around its owner’s house. Capricious as they are, cats often manifest unpredictable temperament that has both amused and bemused their owners. But there’s no denying how cute and funny they can be when they demonstrate one of their moody episodes. Indeed, they can really take us by surprise with their silly shenanigans and weird behaviors.

One of the million instances of their folly was spotted by a Reddit user’s friend when they walked past a particular house. Posted on the glass window was a ‘missing cat’ poster. But the most shocking thing is that the missing cat on the photo was actually sitting next to the poster. Did the kitty just return to the house without the owner’s knowledge?  Did the naughty just playing hide-and-seek with its human? Or was it only fooling around just to make a monkey out of its owner?

My friend walked past this house today… from r/funny

Who knows what this cute kitty was up to? But the person found that scene so hilarious that it needs to be captured on camera. The funny photo of the missing cat was shared on Reddit and immediately went viral. While most commenters find the photo funny, there are also those who find it interesting. Some even believed that the cat on the poster and the cat sitting on the windowsill were twins. And the cat on the poster was actually lost.

Well, if this speculation was indeed the case then the two kitties must be very, very identical. Either way, there’s another similar case where an Imgur user spotted a ‘lost cat’ sign on a window. And there sitting on the windowsill close to the sign was the cat on the photo. Interestingly, the cats on these two similar cases look strikingly similar. 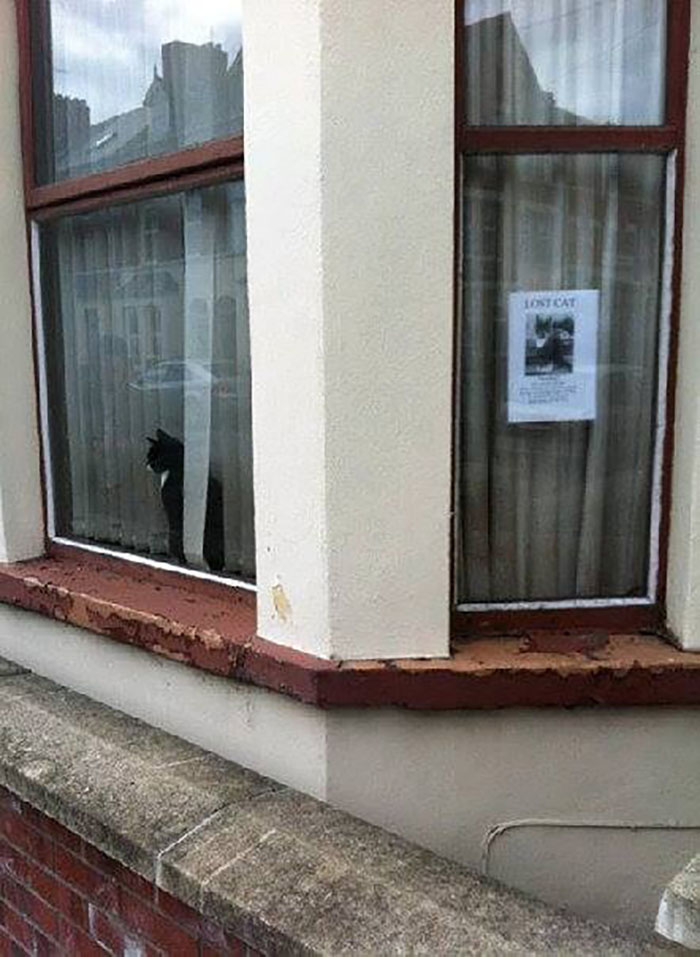