It’s time to hide away the jack-o-lanterns and plastic skeletons. The holiday season has officially arrived, which means the decoration competition has reached its climactic point. Lawns are about to start getting really sparkly and merry, but if you’re in the mood to go really big this season, then you might want to consider giant inflatable lawn decorations. This year, Hammacher Schlemmer is taking the phrase “go big or go home” literally with their giant inflatable Snoopy lawn decoration.

“This is the inflatable Snoopy that is eight times larger than Charlie Brown’s signature Christmas tree. The 16′ iteration of the cartoon beagle is dressed for the season with a gestive green sweater, red scarf, and classic Santa hat, while he holds his friend Woodstock in his right paw.”

If you’re thinking of doing away with the usual Christmas bling, this inflatable version of one of most recognizable characters in the world makes a strong case. For starters, it’s taller than your Christmas tree. And it’ll definitely up the ante of your yearly holiday decoration showdown with your neighbors! 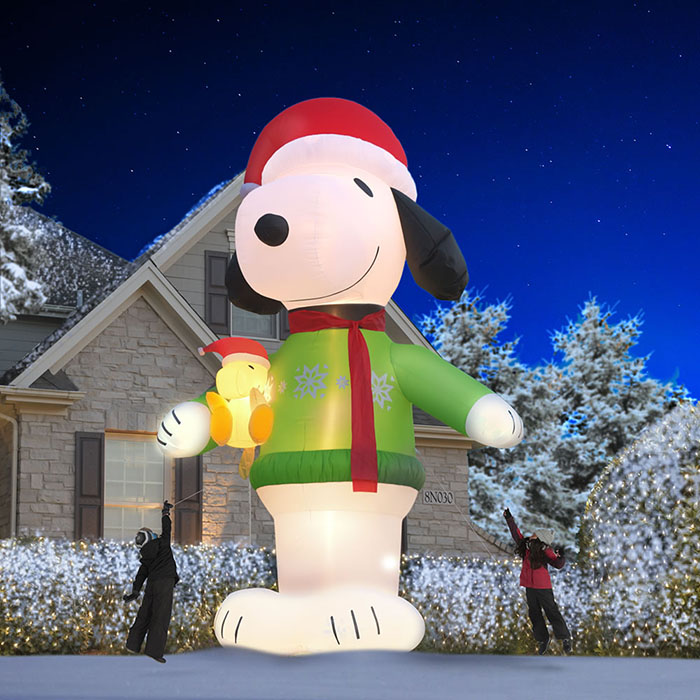 If you grew up reading Charles M. Schultz’s Peanuts comics, then Snoopy probably has a special place in your heart. Standing at 16 feet tall, this giant inflatable Snoopy is sure to dwarf everyone else’s festive decorations. Which will make it hard for anyone to miss your home or Snoopy’s trademark grin. Now, you don’t have to worry about people not seeing your giant inflatable Snoopy when night falls, either.

This supersized Snoopy features internal lights to let him shine and spread happiness throughout the night! And to “prevent him from wandering off to his doghouse”, Hammacher has provided 4 tethers. Additionally, this giant inflatable Snoopy decoration comes with its own built-in air blower to ensure that your giant beagle stays in shape throughout his time at lawn. This colossal inflatable version of Snoopy is exclusively available for $349.99 at Hammacher Schlemmer.

The giant inflatable Snoopy is the ultimate outdoor decoration piece for any Peanuts fan.

You can use your giant inflatable Snoopy for years and years.

A lifetime guarantee also comes with the giant inflatable Snoopy, which translates to the company promising to let your house will forever be known as the house that has a giant Snoopy chilling out in their lawn during the Christmas holidays. And since it’s made from tear-resistant polyester, it’s definitely a good investment!

Of course, Snoopy’s not the only thing you can put out on your holiday lawn this year. Hammacher Schlemmer has also released a giant inflatable Frosty the Snowman that plays movies on its belly! Or, if you’re thinking of turning your lawn into a magical forest, magical unicorns should be right up your alley.