Home » Funny » “Karen” Complains About A Woman’s Porch Decoration By Leaving Notes, So She Fires Back By Adding More

“Karen” Complains About A Woman’s Porch Decoration By Leaving Notes, So She Fires Back By Adding More

A few years from now, we’re going to look back at the year 2020 as the Year of Covid-19. Hopefully, the newly-developed vaccines will put a stop to the pandemic. But no vaccines will ever stop self-entitled women who think they’re above everyone else. What’s more, these overly demanding women are here to destroy Christmas. Yes folks, Karen is here to give the Grinch a run for his money.

A Facebook user shared a rather amusing story about her note war with a neighbour. She decided to call her neighbour ‘Karen’ because she has the necessary attitude and feeling of entitlement to deserve this pejorative name. The feud started with her porch gargoyle which she named Frank. According to her, Frank has served as her guardian for 3 years. But lately, she found a note from a neighbour asking her to take the gargoyle down because it is not appropriate for Christmas. Well, instead of bowing down to the obnoxious ‘command’, she decided to fight back and respond in the most hilarious way possible. 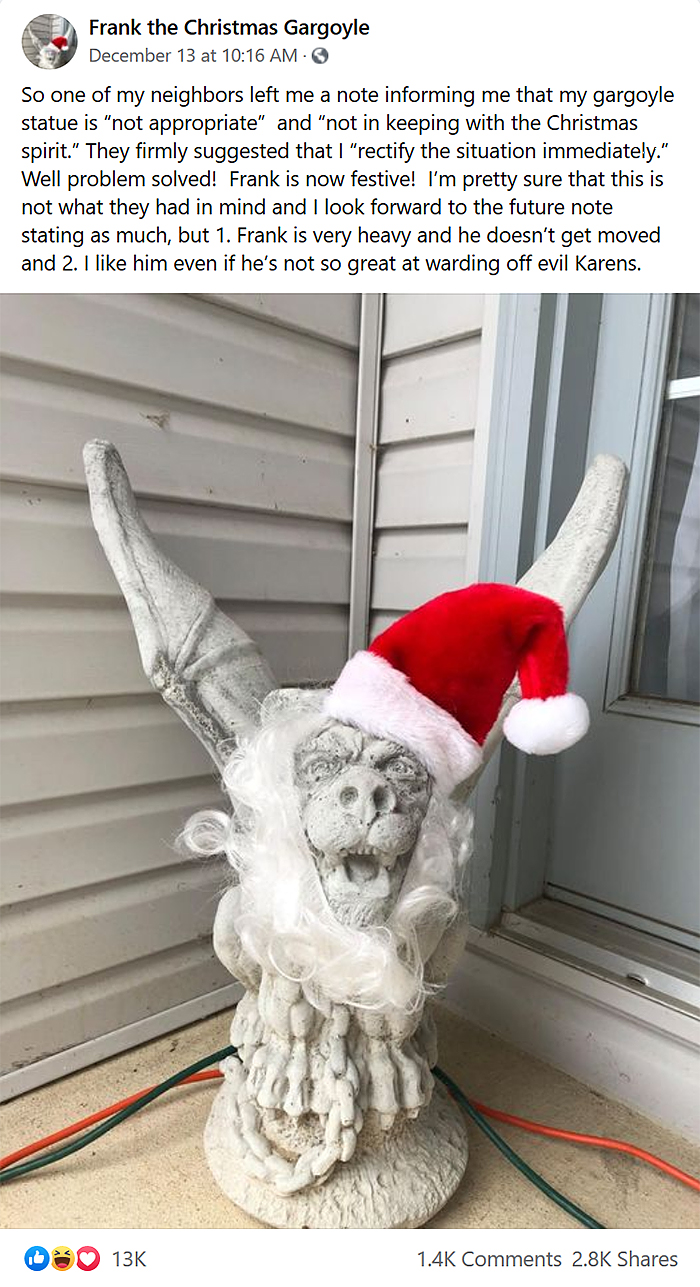 On her Facebook page, she posted a photo of Frank wearing a Santa hat and a white beard to make him look festive. Apparently, she had no plans of taking away the gargoyle from her porch. She also hilariously said that she still likes Frank even if he was unable to ward off evil. As if that’s not enough, she even added a mini Christmas tree next to Frank. Of course, the entitled neighbour didn’t like what she saw and left another note expressing her disappointment. As a response, she added an elf and placed it on Frank’s back along with a reply note saying that the elf is watching. 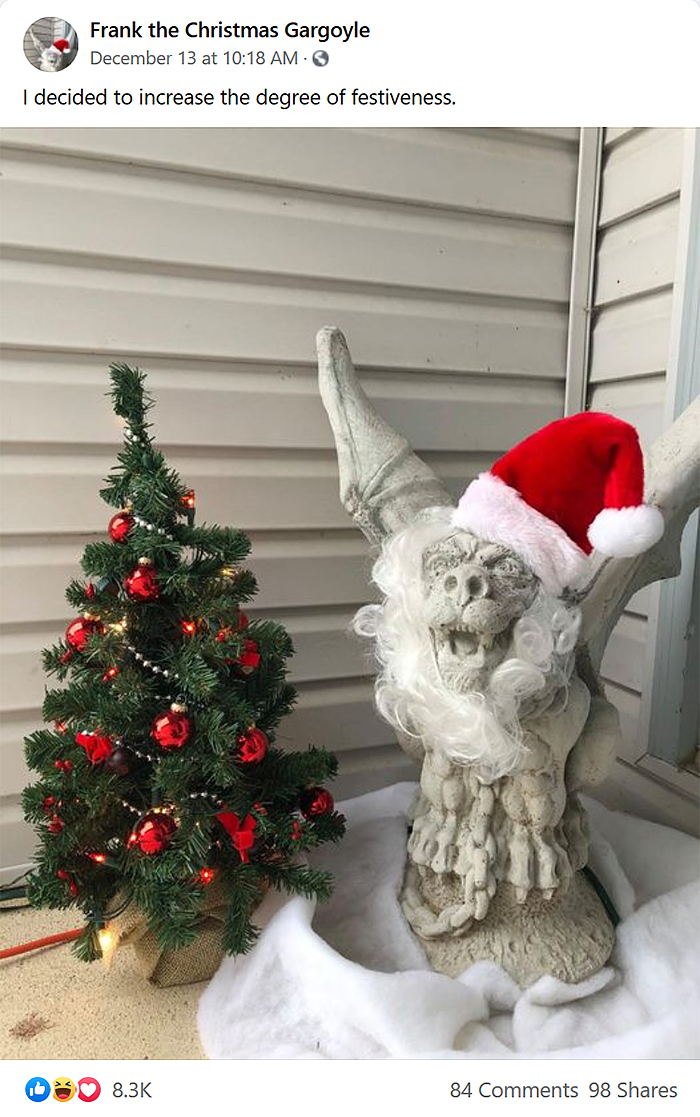 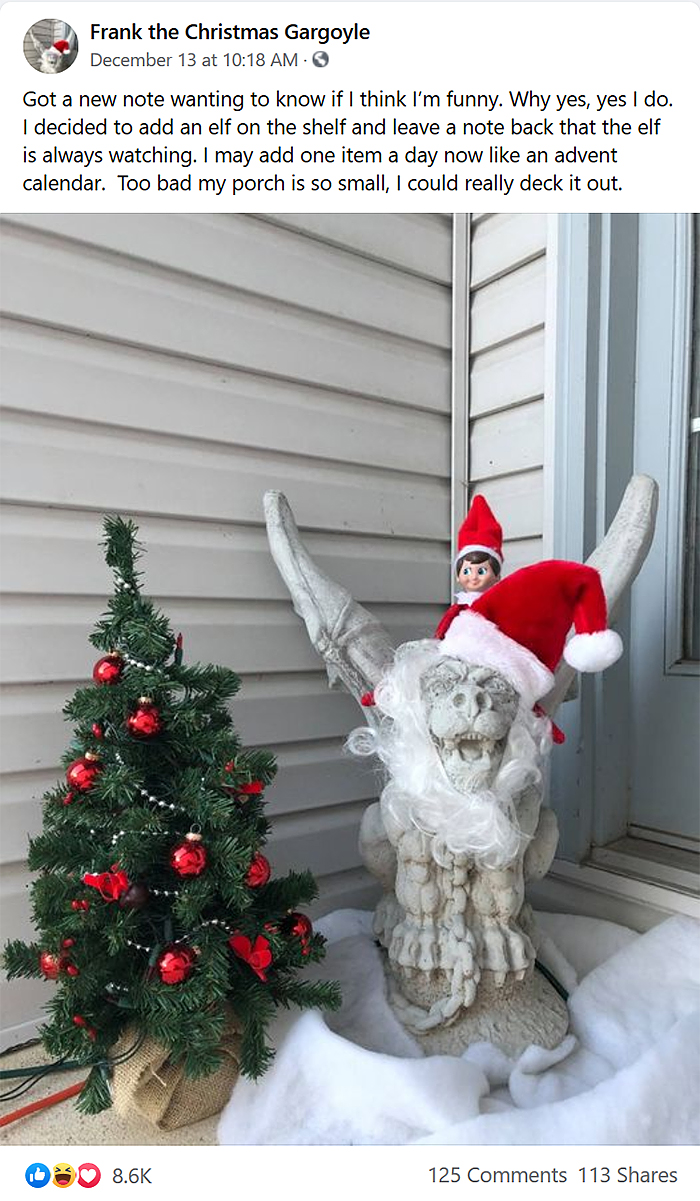 That’s how the note feud started between Frank’s owner and her neighbour. Every time a note is left on her porch, she responds by adding more festive decorations next to the gargoyle. And how it unfolded will make you laugh and feel furious at the same time. Read the whole story below. 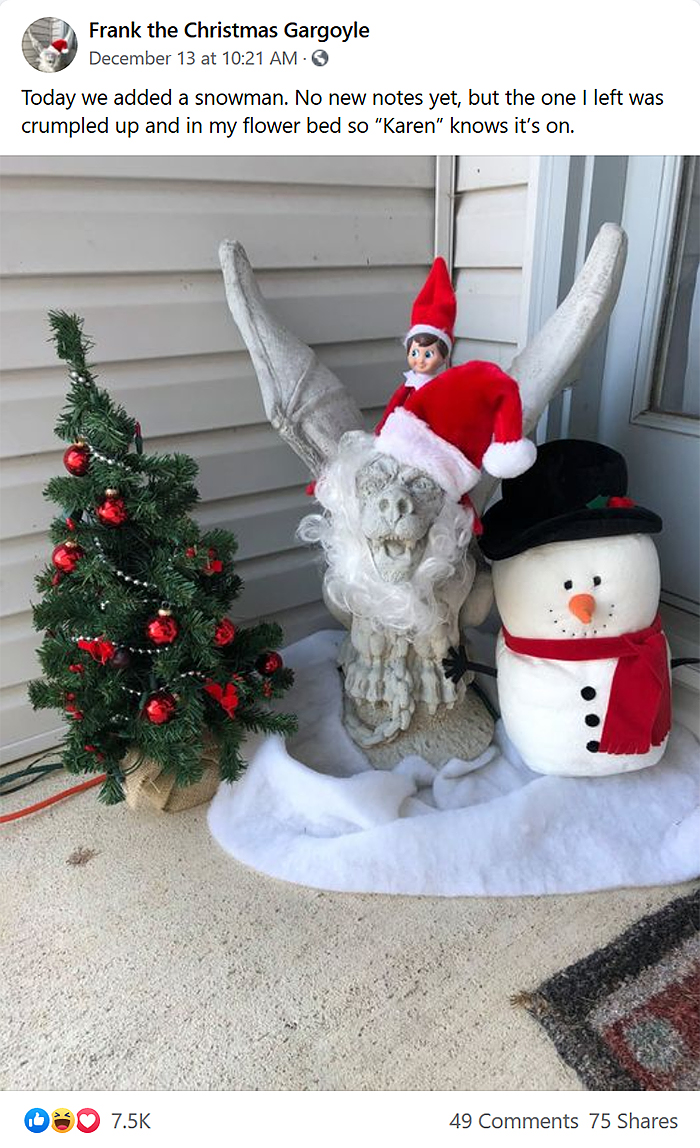 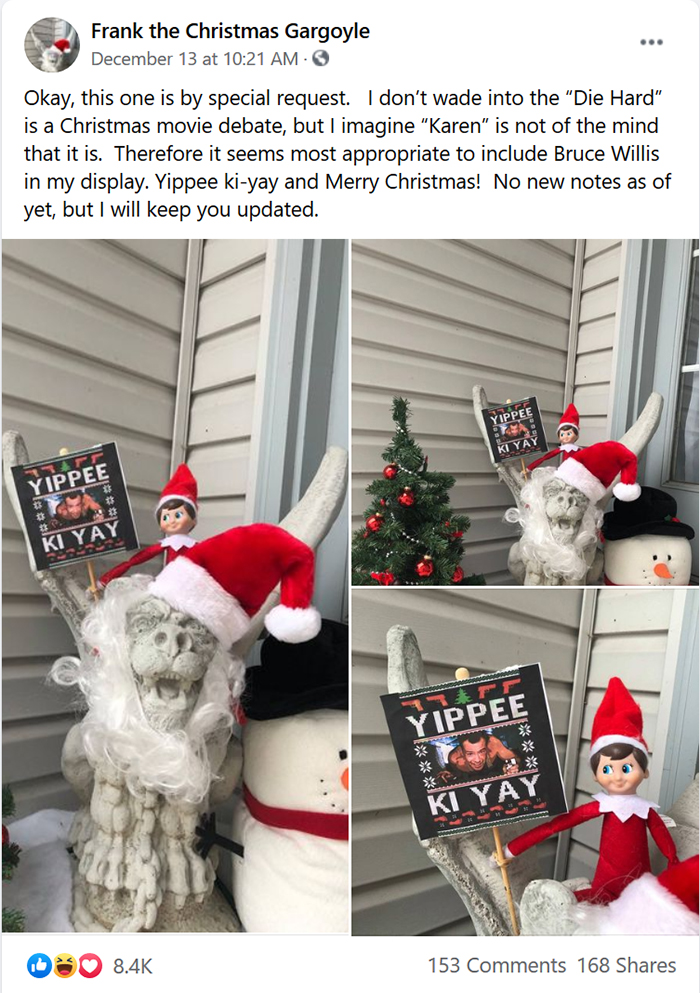 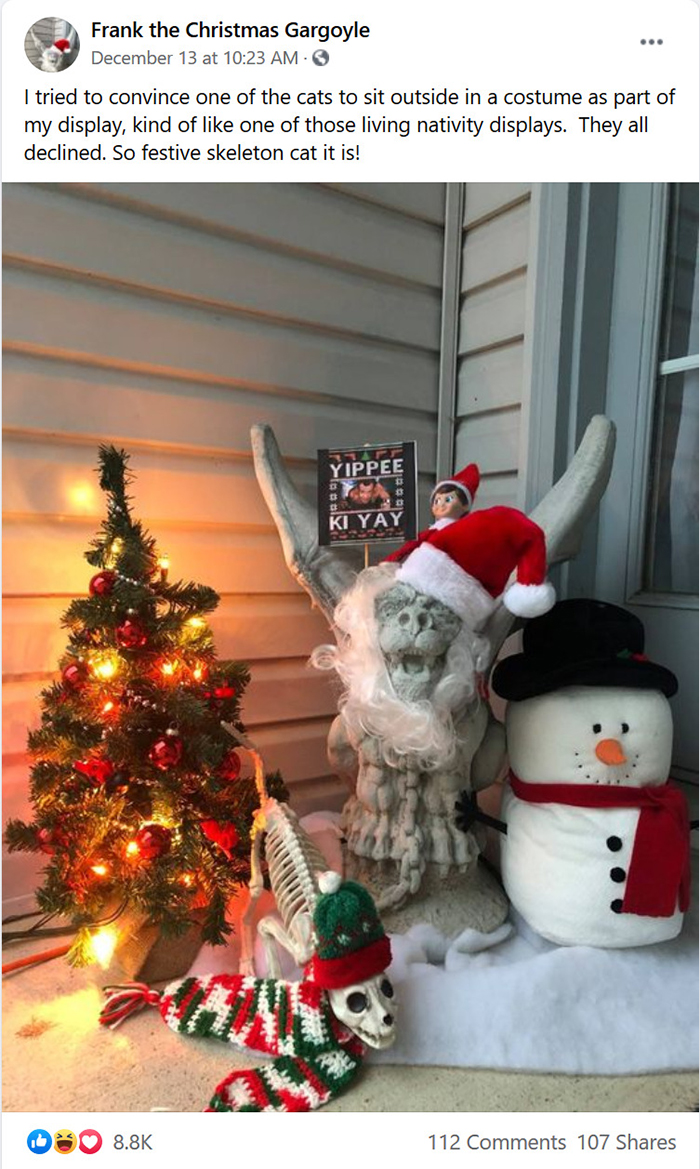 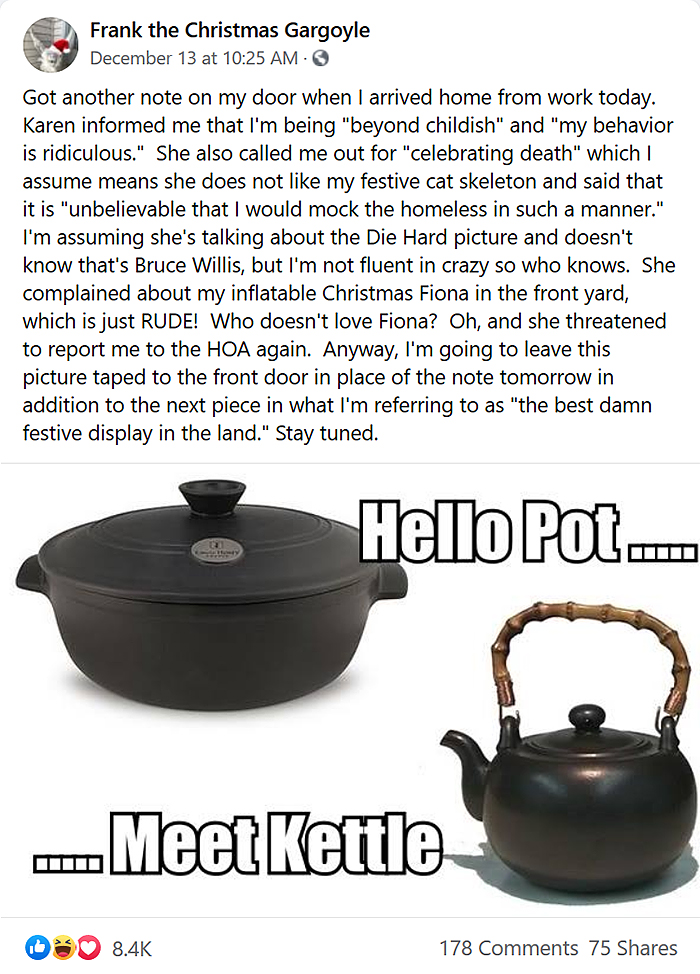 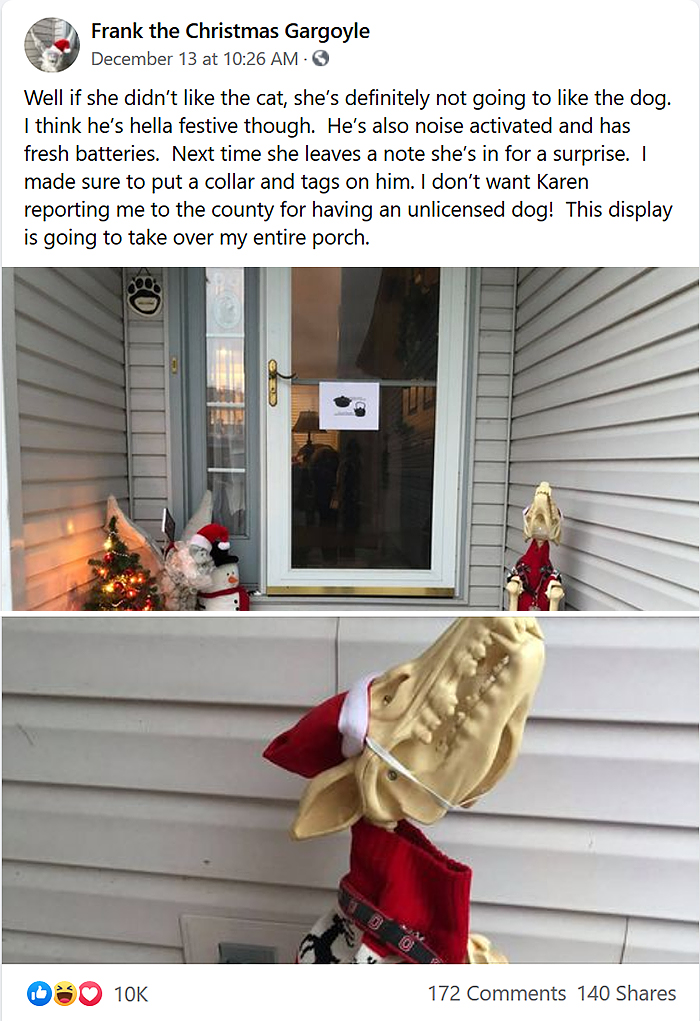 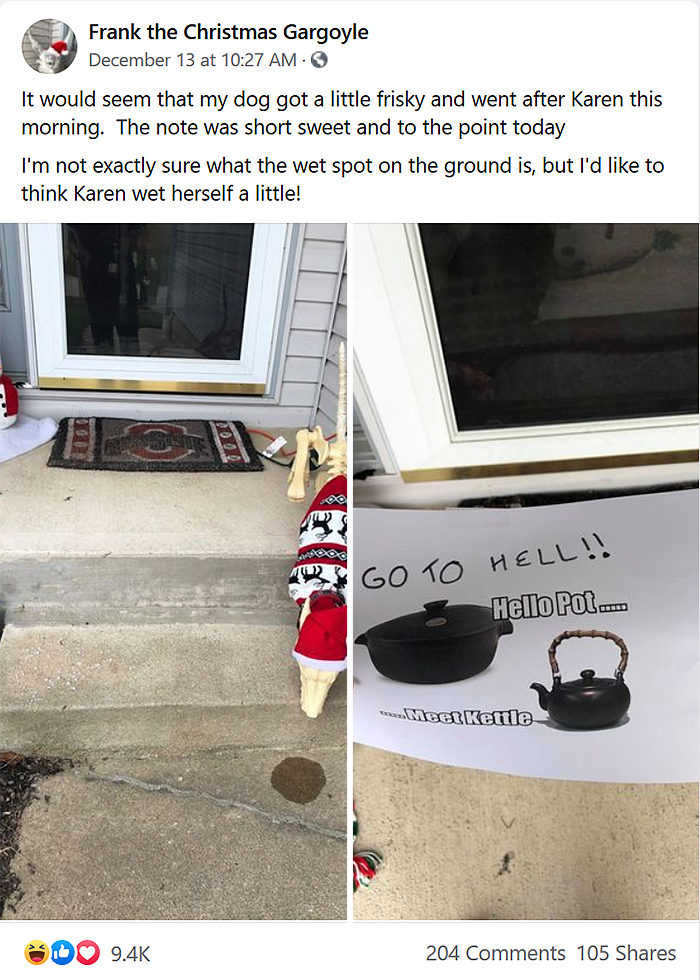 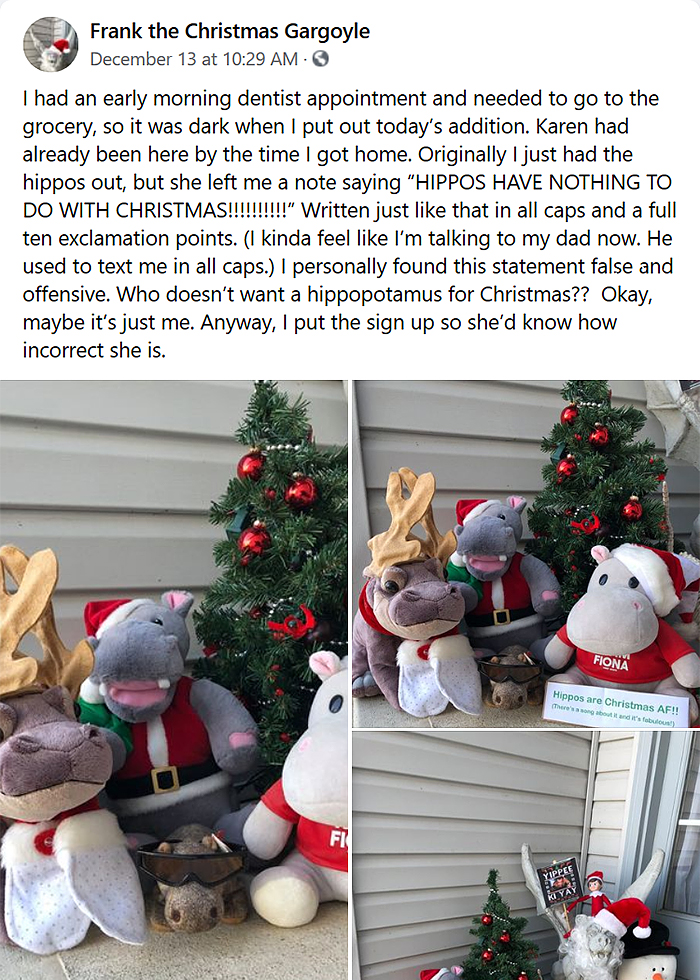 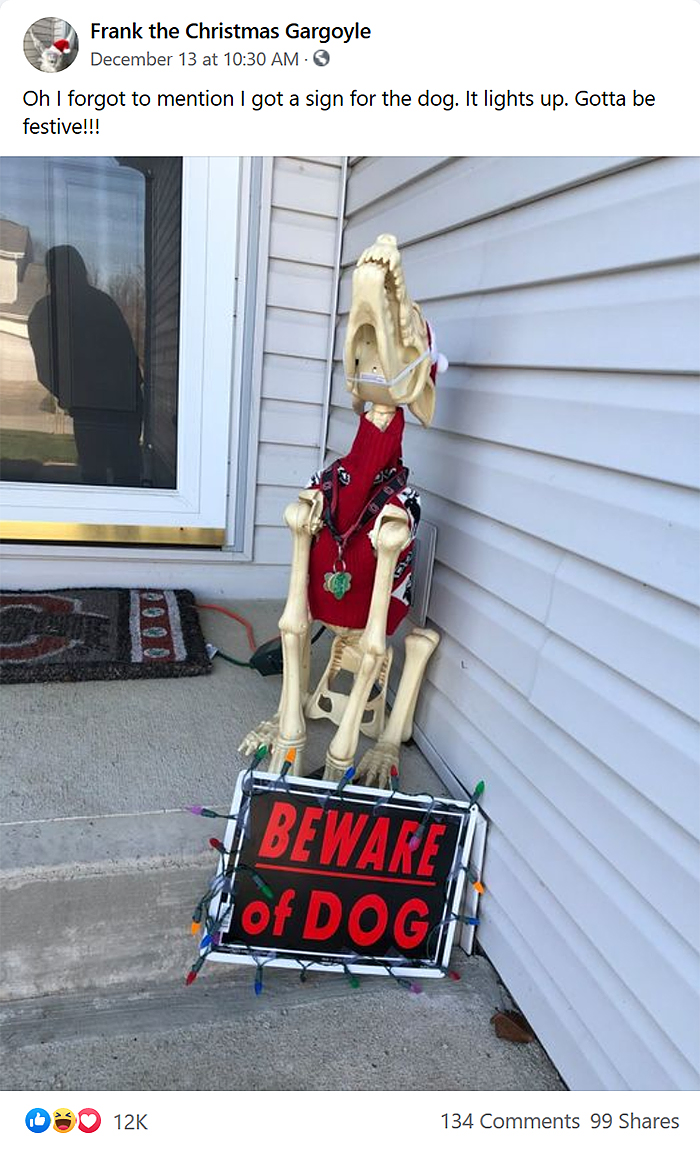 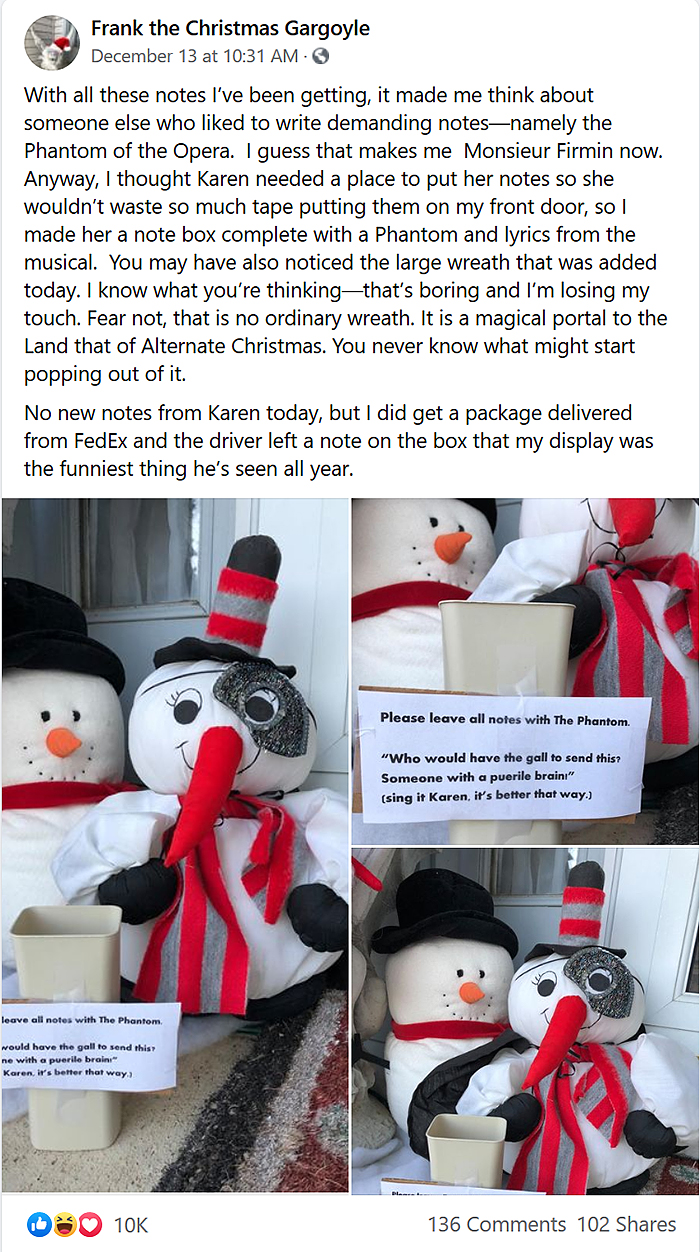 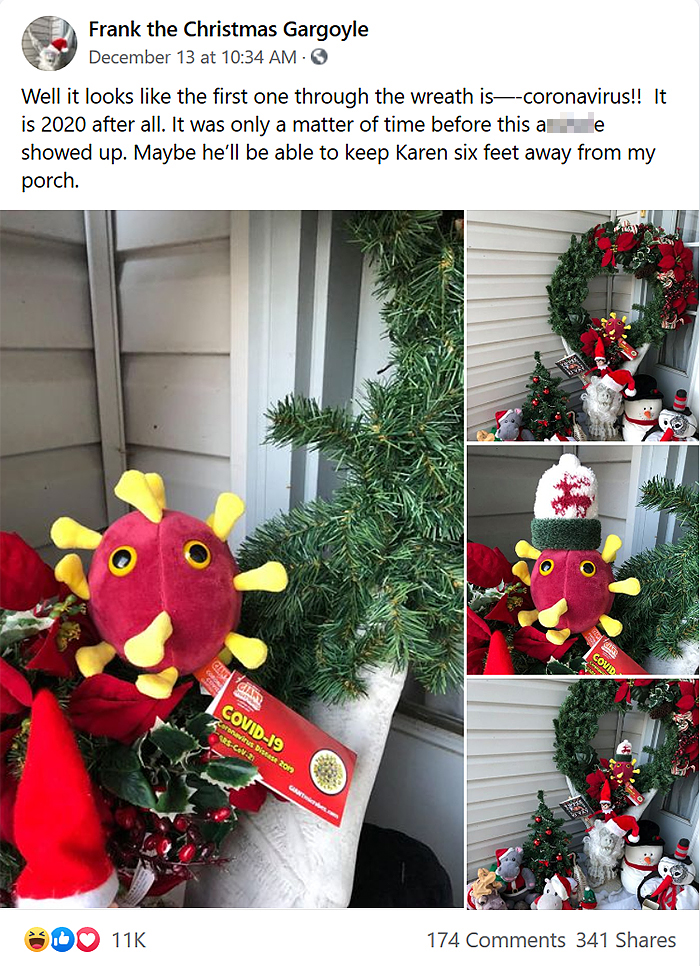 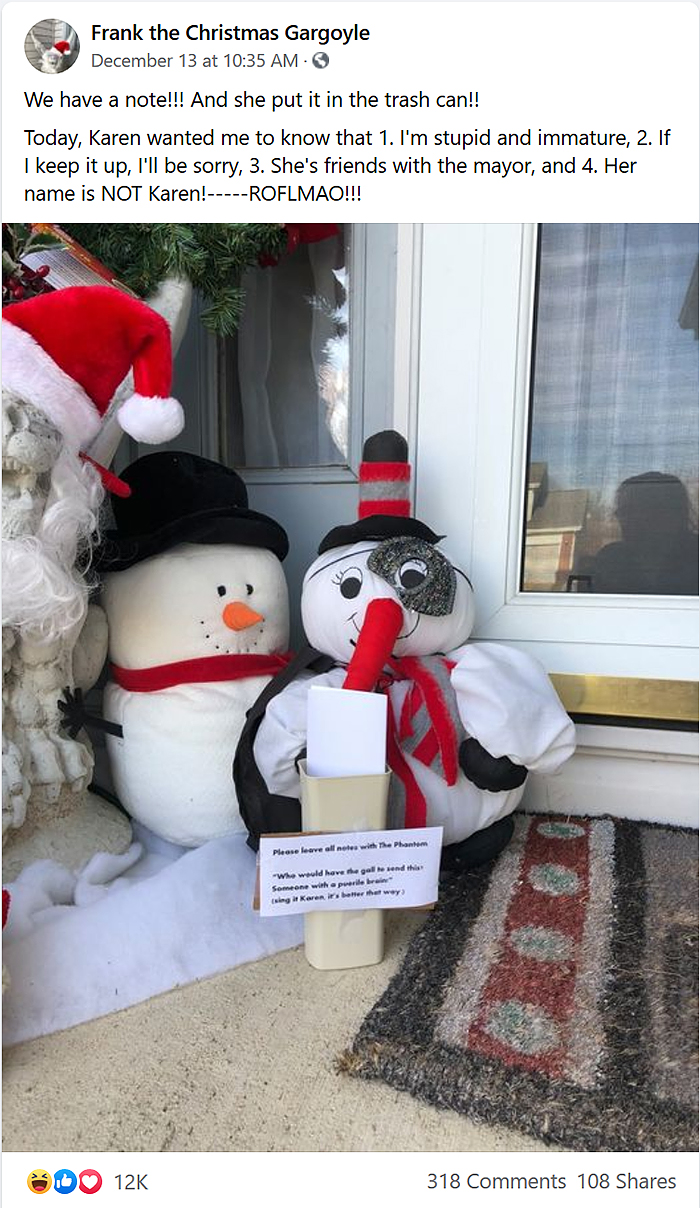 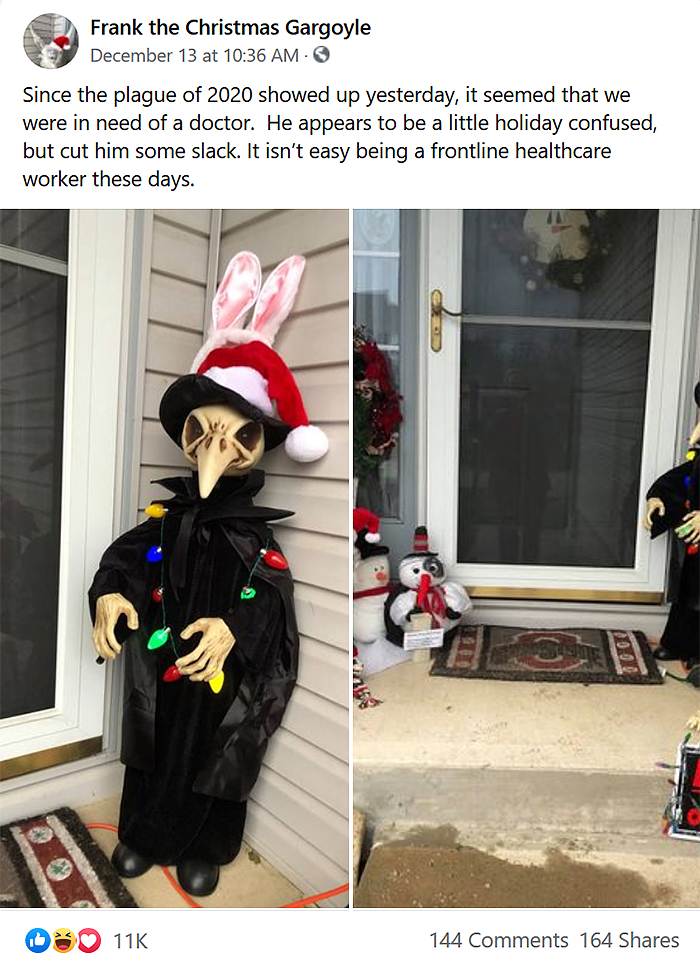 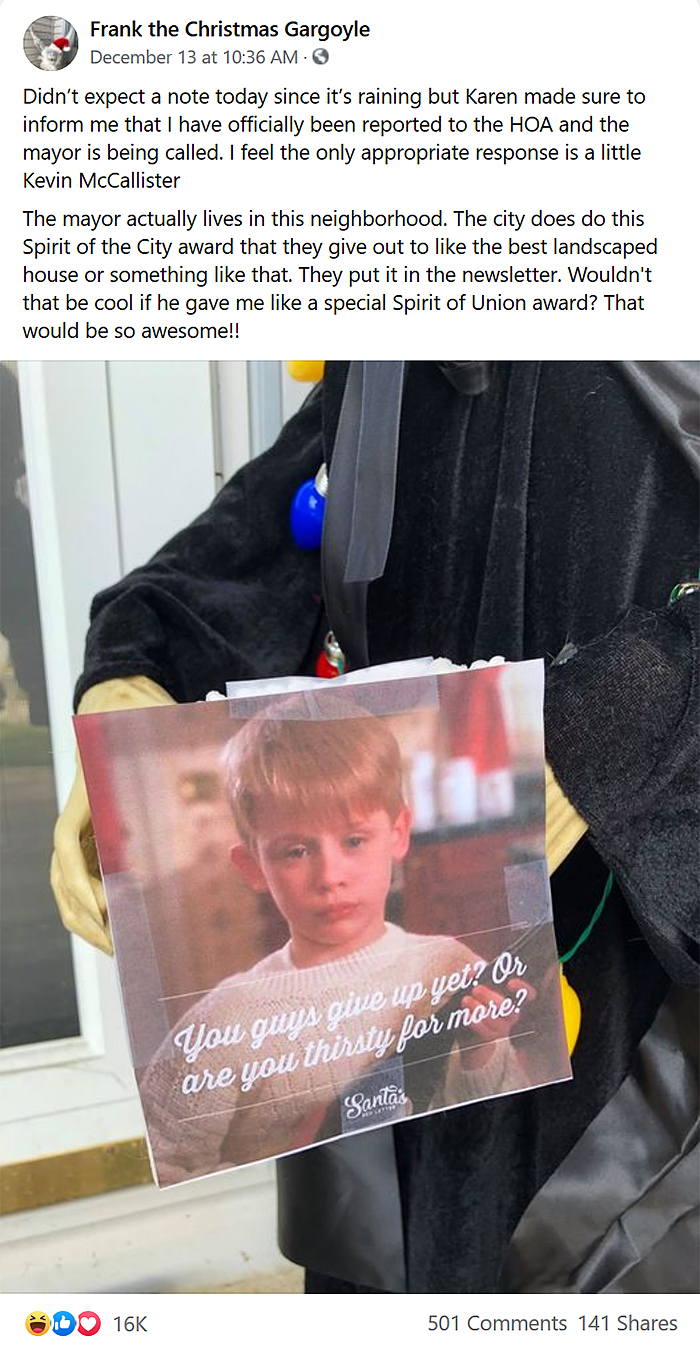 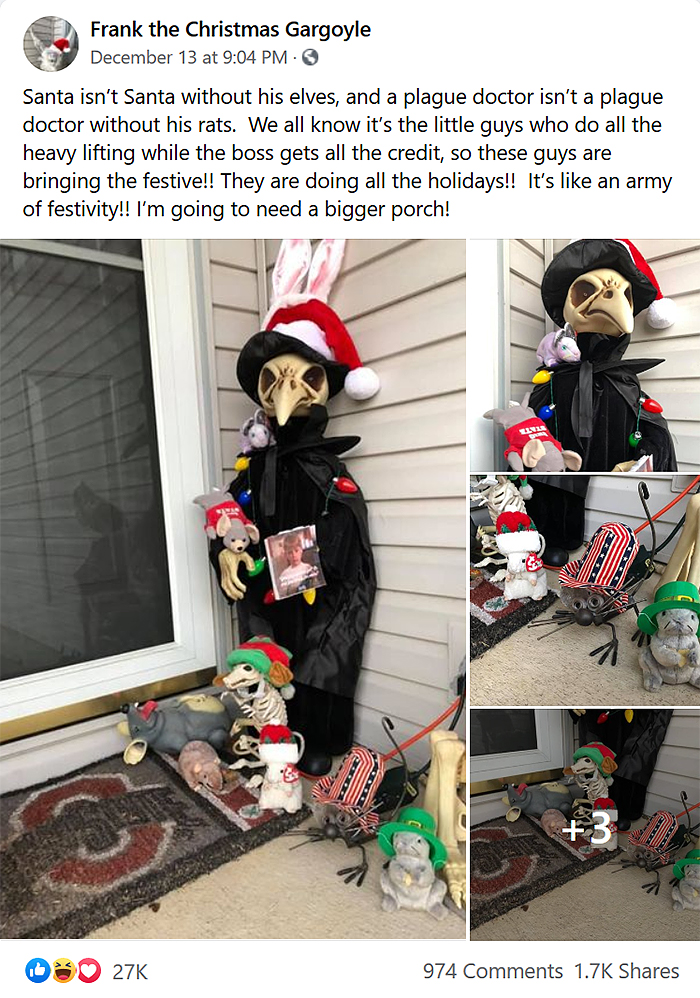 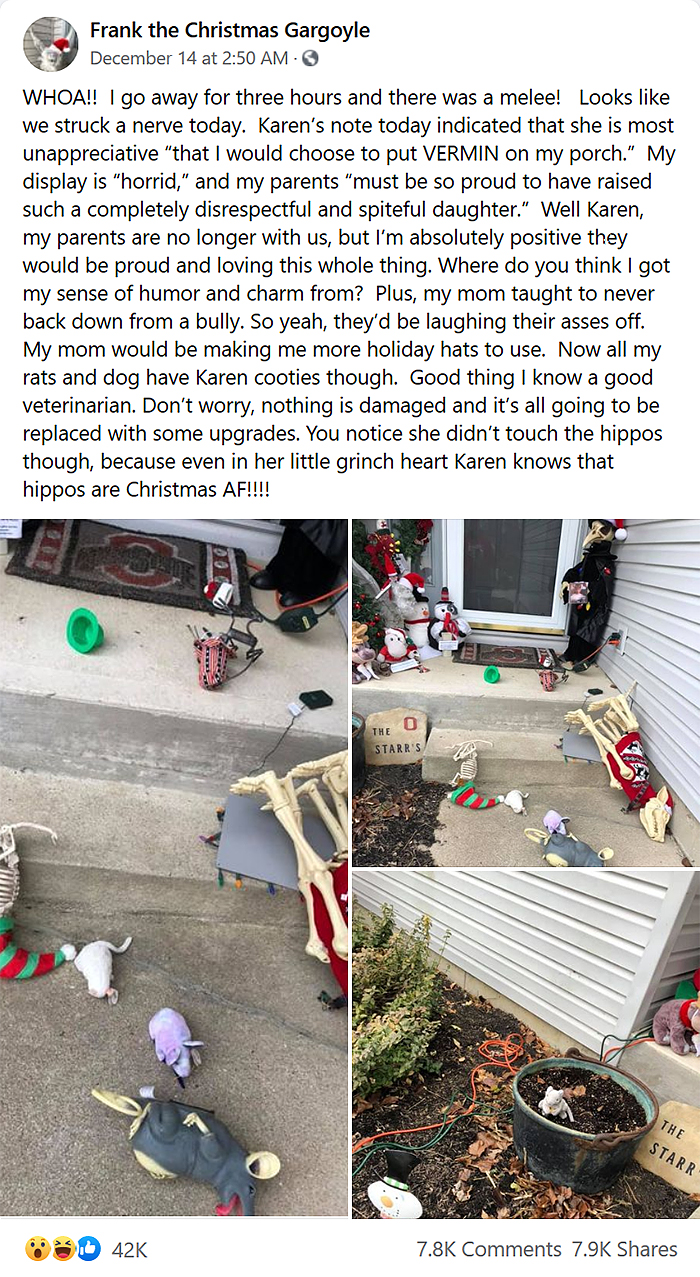 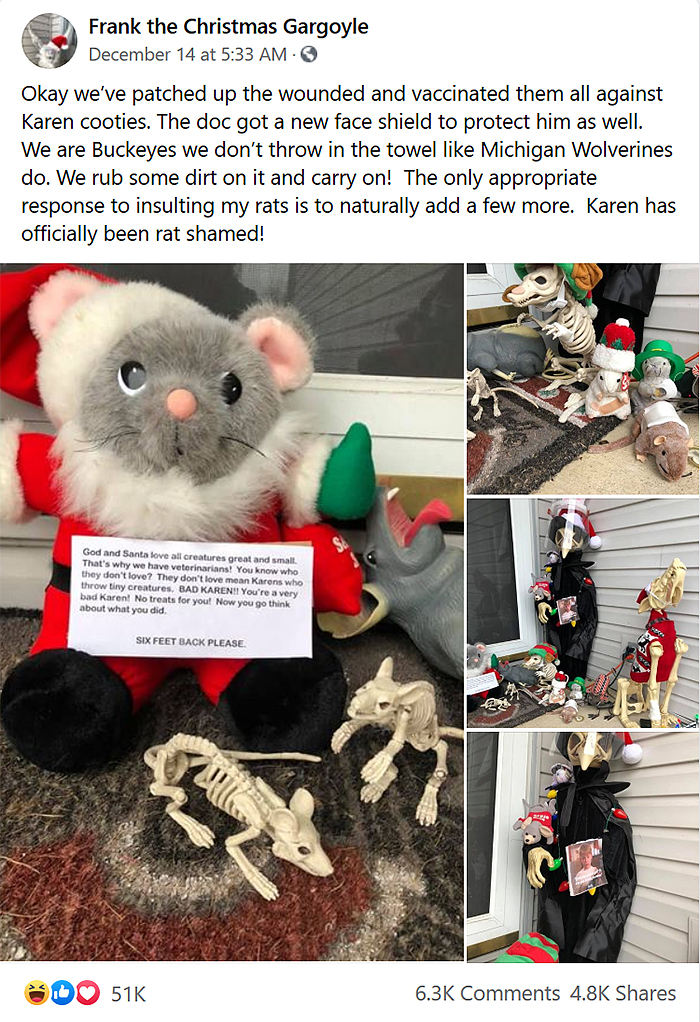 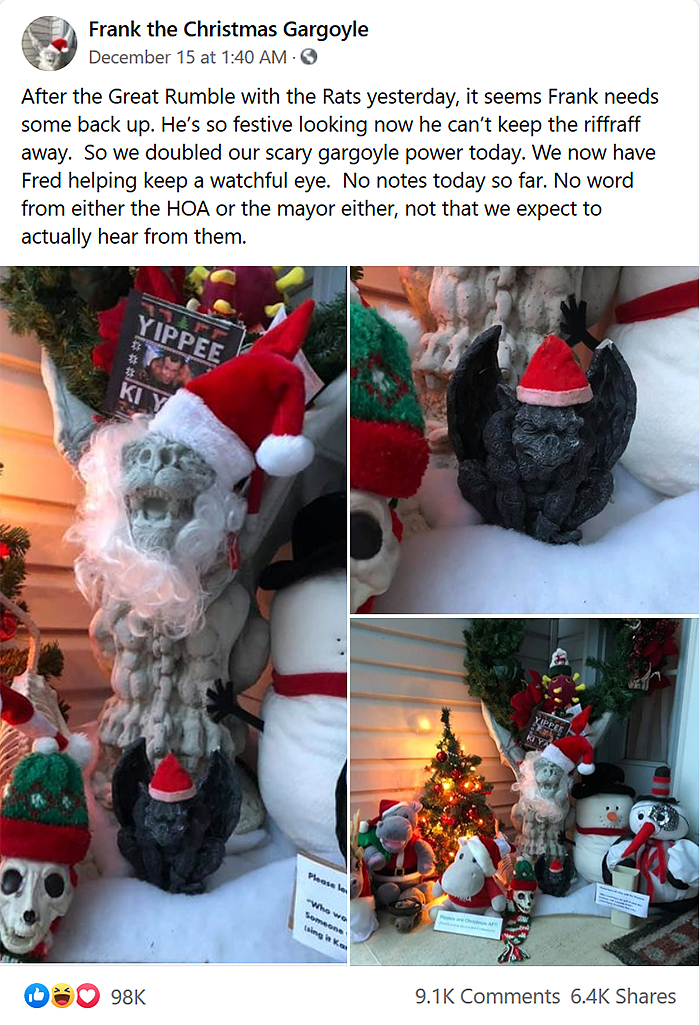