In the Mill Run Section of Stewart Township, Fayette County, Pennsylvania, a gentle waterfall streams along Bear Run in the Allegheny Mountains. But the tranquil waterfall isn’t the most remarkable highlight of the place. Rather, it’s the house that stands over the waterfall. The iconic ‘house over the waterfall’ is known as Fallingwater House. It was designed by one of America’s best architects, Frank Lloyd Wright. The famous architect has built more than 500 structures during the span of his career. But his most notable work is the Fallingwater House in which Time even referred to as his ‘most beautiful job’. 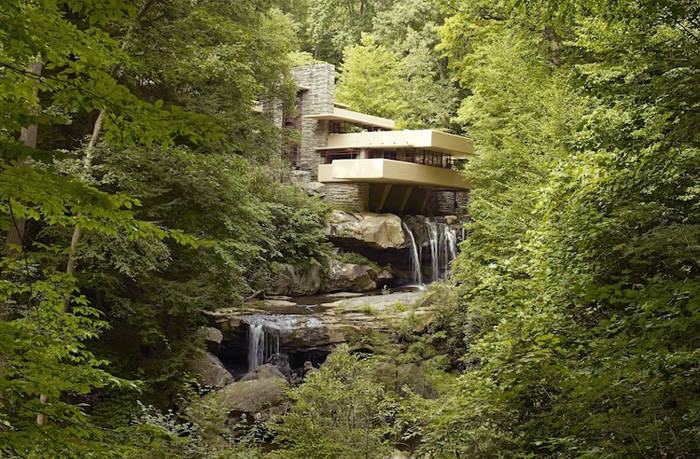 What is organic architecture?

Wright came up with the idea of unifying a building to its natural surroundings in 1897. His earliest works featured large glass panes along the walls to blur the boundary between outdoors and indoors. In addition to this, Wright also considered the characteristics of the site and all natural elements within the range. 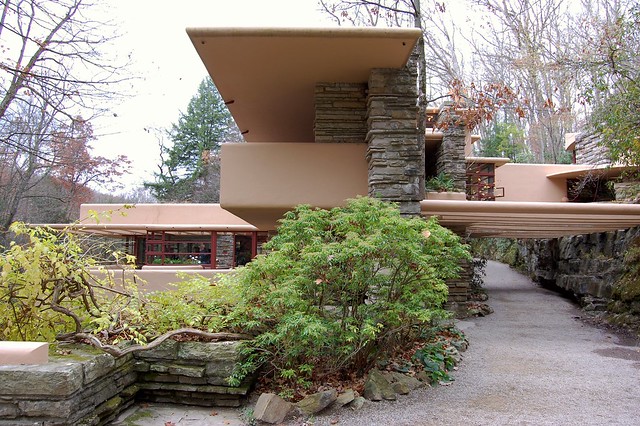 Most of the homes and commercial buildings he designed are paradigms of organic architecture. But Wright was able to use his signature work to its full potential when he was commissioned to build the Fallingwater House.

In 1935, Wright received a project of building a summer home along a stream in Bear Run. Due to his mastery of integrating a structure with its environment, Edgar Kaufmann, owner of Kaufmann’s Department Store, hired him to do the job. The Kaufmann family wanted to replace their worn-out weekend home on the Appalachian reserve. And Wright seemed to be the perfect fit for the job.

Instead of placing the house along the stream, Wright suggested to build it on top of the property’s waterfall. The design came as a surprise to the Kaufmann couple because they’re hoping to have a view of the stream. But the brilliant architect has another thing in mind. Instead of just looking at it, why not live with it? The Kaufmann couple later realized the possibility of having a natural waterfall as a part of their lives.

Surrounded by lush natural resources, the site for the Fallingwater House served as an ideal platform for organic architecture. Wright focused on bringing the waterfall as an integral part of the house. In order to achieve this, he decided to cantilever the house from the rocky bank of the waterfall. Thus the structure’s stacked form that further assimilates the stone ledges above the falling water. 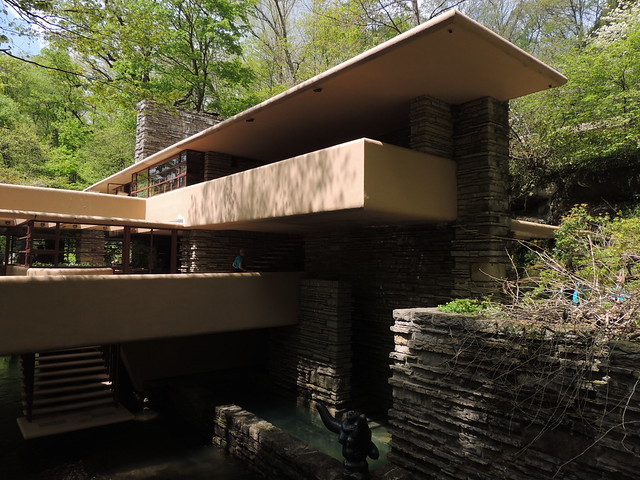 To make the exterior blend in with the environment, Wright used reinforced concrete and Pottsville sandstone for the external walls. With walls designed to look like rock ledges, the house indeed seems to be an organic part of nature. Furthermore, Wright used stucco to coat the terraces and painted them in ochre color for a more natural exterior finish. From the outside the Fallingwater House appears to subside into the environment and emphasize the waterfall.

“a building should grace its environment rather than disgrace it.”

Bringing the Outdoors Inside

In order to fully unify the house to its surrounding, Wright designed the interior that would also showcase the outdoors. Rather than removing two boulders, he decided to build a sandstone fireplace around them. Large windows clearly exhibit the greeneries of the surroundings that make the inhabitants feel like they’re outside. The interior walls are layered with unwaxed cork and most features are painted in Cherokee red to resemble natural lumber. Additionally, the floors are made from stone to integrate it with the rocky bank. 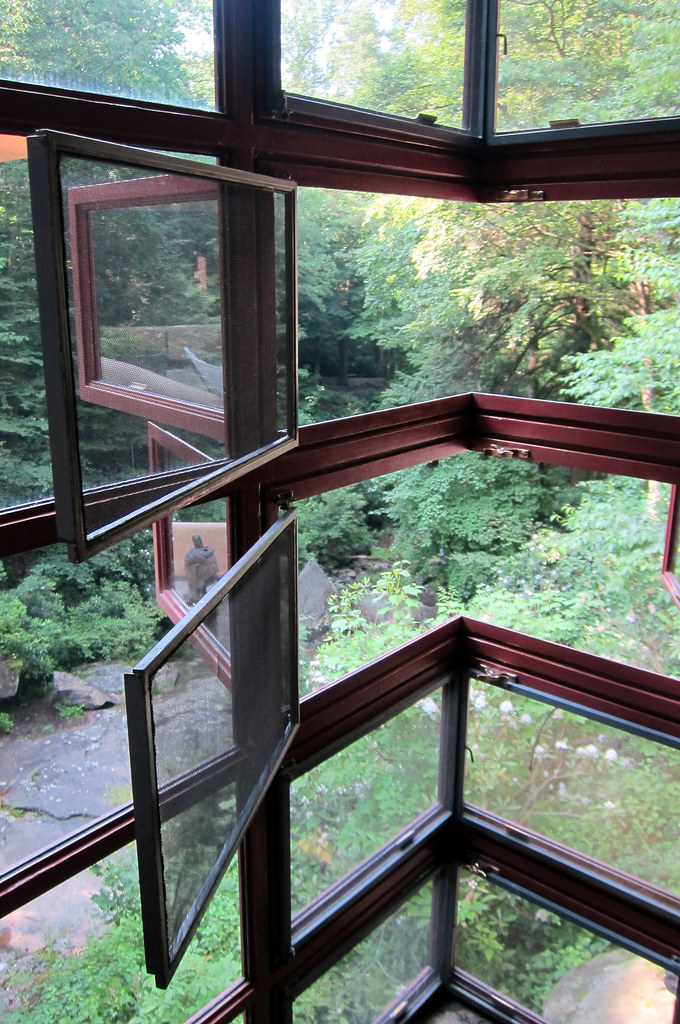 Wright also furnished the interior with furniture and decorative pieces that exude the appearance and ambiance of the outdoors. Lastly, Wright created creative ways to access the outdoors just like the staircase that brings visitors to the stream. 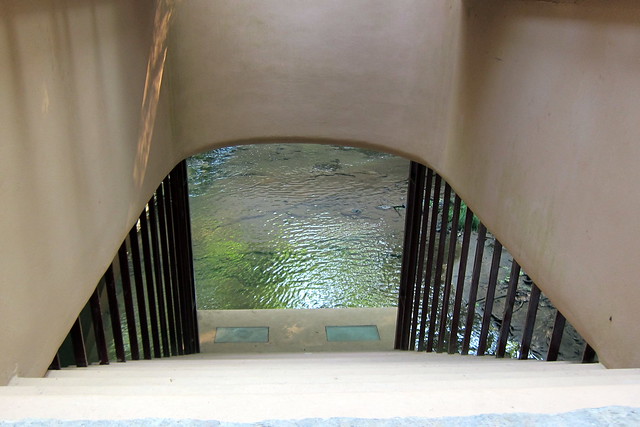 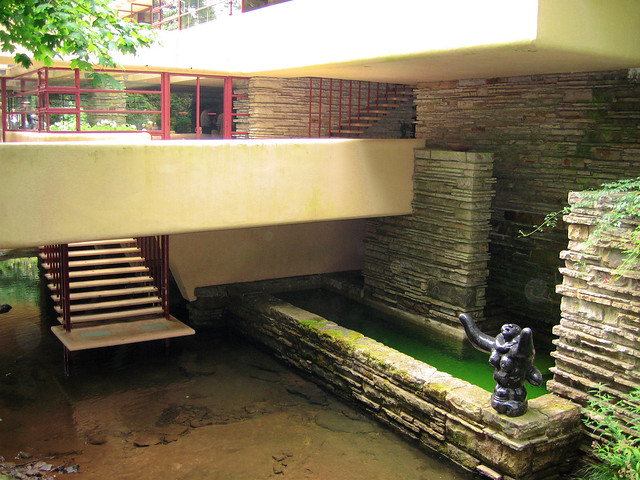 The Fallingwater House served as a weekend home for the Kaufmanns for 28 years. In 1963, Edgar Kaufmann, Jr. decided to donate the family estate to the Western Pennsylvania Conservancy, including the house.

“It has served well as a house, yet has always been more than that, a work of art beyond any ordinary measure of excellence,” Edgar Jr. said.

In 1966, the famous house was registered into the U.S. National Historic Landmark. And in 1991, it was named as the ‘best all-time work of American architecture’ by the members of the American Institute of Architects. The historic house now serves as a museum to showcase the unrivaled talent of a genius architect and his undying love for nature.