This Giant Foldable Television Can Collapse Into The Floor

From a large box with grainy black-and-white images to flat screens with high-definition displays, the television has seen the most dramatic evolution since it was invented. With the modern UHD smart TV that displays crisper and sharper images than reality itself, one might think that this electronic device has reached its technological pinnacle. Enter C SEED, the world’s first foldable LED TV, and the 21st century realizes that the technological evolution never stops.

Designed to bring digital entertainment to the next level, the C SEED television can be folded in and out to save space which has become the standard of modern living. Sporting a minimalistic yet futuristic design, it is engineered to compact perfection for indoor or outdoor use. As also the world’s first weatherproof TV, this giant folding television can protect itself from the harsh sun or heavy rain. So you can install it on your patio, poolside or in other outdoor relaxation areas.

C SEED Folding TV For Indoor And Outdoor Use 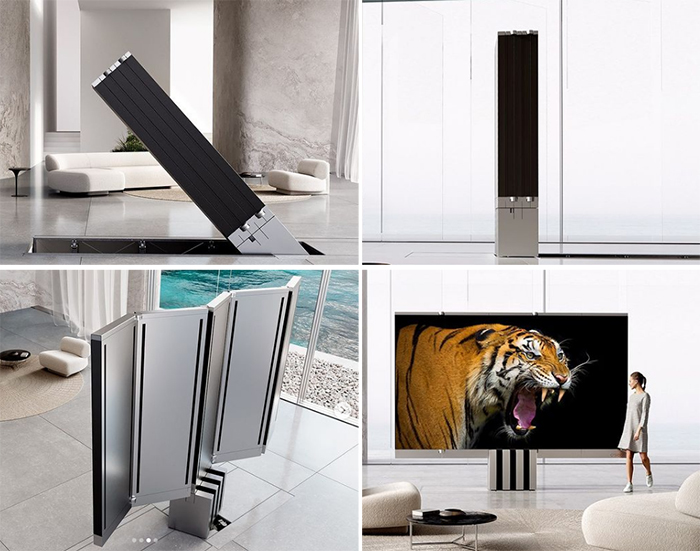 The groundbreaking C SEED 201 model consists of 7 large LED panels that expand to form a large seamless television with a screen diagonal of 201 inches (176 inches x 94.5 inches). The set of foldable panels is encased in storage casing which is to be installed underground. When not in use, the casing hides underneath the ground or floor to save a lot of space. The folding TV can be activated with a remote control. Watch as the panels, forming a single column, slowly rise from the ground. The panels then expand to form a giant LED TV screen with a dazzling bright display to give you a whole new entertainment experience.

When not in use, simply store it away with a press of a button. And watch the panels fold into a single column and quietly descend into the underground casing. A truly first-of-its-kind TV that redefines ‘grand entrance’ and ‘grand exit’. Furthermore, the C SEED is equipped with a state-of-the-art outdoor sound system made up of 6 built-in speakers and a subwoofer. To make the viewing experience more pleasurable, the angle of the display screen can be changed 135 degrees in either direction. So you could just pick your most comfortable spot and let the TV adjust its direction for you. The 201 model also features a multi-source media server rack that allows you to connect all existing devices via HDMI to transfer video and audio data.

In addition to the 201 model, the C SEED TV also comes in many different sizes ranging from the smallest 144 to the largest 256 models. Apparently, this trailblazing electronic comes with a hefty price considering all its amazing and pioneering features. And there’s a reason why it is called the ultimate luxury TV. If you’re planning to install it indoors, make sure to place it in a room with high ceiling.