Frostbite becomes a major concern for many cattle farmers especially because the winter season coincides with the calving season. If cows are left unprotected from frigid weather, they’re highly at risk of frostbite and hypothermia which could lead to death. Significant calf losses may occur due to extreme low temperature caused by severe winter weather. But appropriate management and precautionary measures can help cattle producers protect their calves from these risks. Many of the calves that survived harsh winter weather usually lost their ears and tails from frostbite. In order to prevent this, a certain cattle farmer made earmuffs for his calf to protect it from cold. For the sake of sharing this ingenuity to help other cattle producers, he posted the photo of the calf wearing a knitted pink ear coverings on Twitter. And just like that, calf earmuffs suddenly became a fashion trend in calves.

Several photos of calves wearing earmuffs started to sprout from different social media platforms. Although earmuffs are intended for their practical use of protecting animals from frostbite, there’s no denying the cuteness they bring. Colorful, stylish calf earmuffs didn’t only protect them from frostbite but these ear coverings also made them more adorable.

Earmuffs can effectively keep the cattle’s ears from getting frostbite. But it is also important to protect other parts of their body as well. Aside from the protecting the ears, the calf should also wear something that could keep its entire body and tail warm. The limbs are most at risk of frostbite. But you can minimize the risk by providing appropriate bedding by rolling out some dry round bales of hay. Moreover, wind chill can dramatically increase heat loss in calves. So, providing windbreaks for calving cows can save them from wind chills. 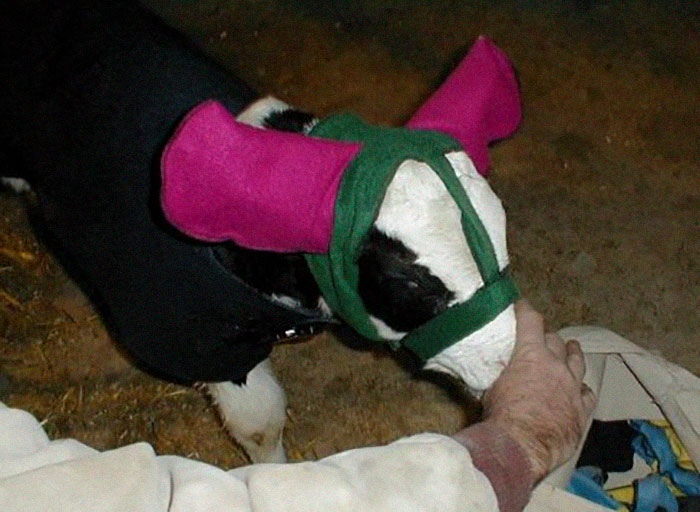 Take note that newborn calves are at higher risk of getting frostbite. So, it’s essential to provide enough earmuffs, blankets, and bedding to keep them warm during icy cold seasons. Unlike adult cattle, newborn calves are unable to maintain their body temperature due to underdeveloped circulatory system. This is why safety intervention is necessary to help them survive the cold weather. Always be vigilant and you should be able to detect early signs of frostbite before it gets worse. Remember, treating frostbitten areas is often unrewarding so prevention is always of utmost importance.

Here’s what people have to say about the calf earmuffs for calves: