What comes to your mind when you see or hear the word Disney? Princesses with magical dresses, catchy songs and adorable animal sidekicks? Maybe it’s certain pop stars whose careers started from Disney Channel? Or perhaps, their epic theme parks like Disneyland, which is dubbed as ‘The Happiest Place On Earth’? All these associations are only the tip of what has come to be known as Walt Disney’s billion-dollar empire. If you look closely at Disney’s timeline, you’ll see how quickly they went from a studio that gave life to classic fairy tales to becoming a media super power. But what is in Disney’s future?

True to its founder’s vision and aspirations, The Walt Disney Company has become larger than life itself. In the past years, they’ve made some pretty surprising acquisitions. Marvel and Lucas Films came as a great shock to fans, to say the least. And when Disney+ came out in November, it became clear that they plan to be around for a long, long time. 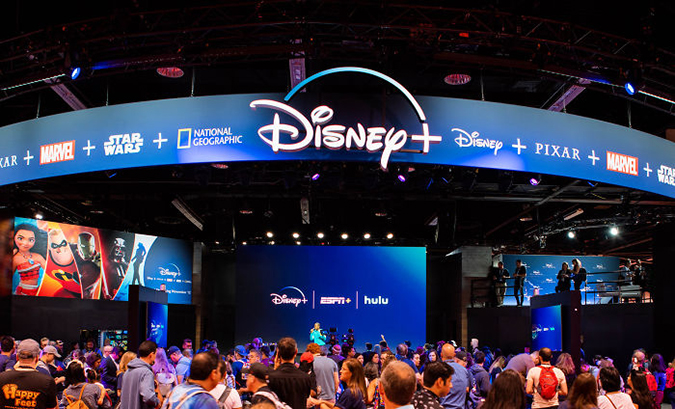 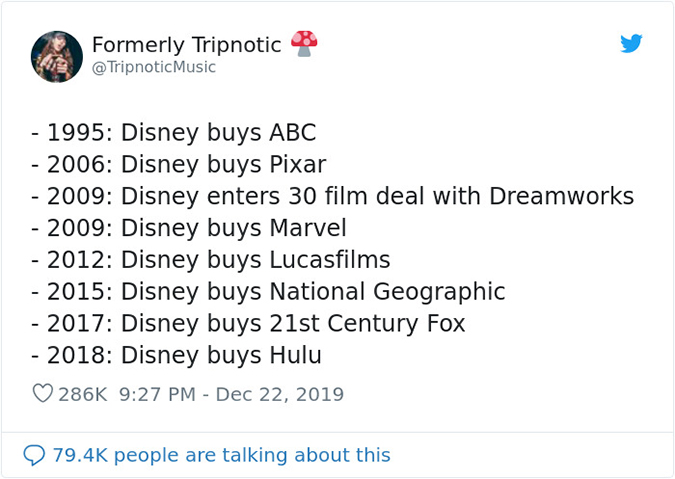 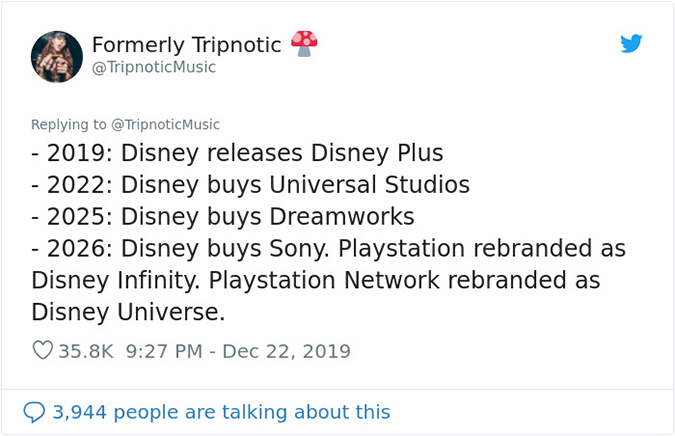 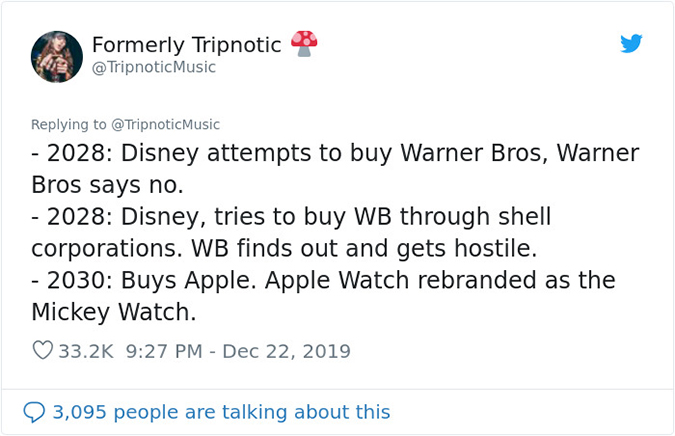 On the basis of all these impressive ventures, Dreux Moreland, came up with an interesting, dystopian timeline for the company. The timeline starts off at 1995, where he lists Disney’s real acquisitions and ventures up until 2019. Then he lets his imagination go wild until he reaches 2100, where “Disney announces new X-Men movie. Marvel fans are excited”.

Moreland’s prediction of Disney’s future endeavors starts off normally enough. There’s a lot of company acquisition going on. Everything goes smoothly for the company until they try to buy off Warner Bros., which refuses. The growing empire didn’t take too kindly to the rejection and began to focus its efforts in conquering the company that dared defy them. It gets interesting, as we see the beloved child-friendly company ditch its family friendly image for a more ruthless, power-hungry persona.

Slowly, as the years go by, we see iconic brands get Mickey-fied. Fore example, Sony’s PlayStation gets “rebranded as Mickey Infinity”. And if that wasn’t enough, Moreland also wrote that by 2031, “The Church of Baby Yoda” will be the world’s fastest growing religion! We’re pretty obsessed with Baby Yoda, but we’re not sure that’ll turn into permanent worship yet.

Things get tense in Disney’s timeline when the mega-conglomerate forms a private military to storm the headquarters of the stubborn Warner Bros. Later, Mickey Mouse becomes stronger than Superman when his parent company acquires DC Comics. We’re having a hard time imagining this, to be honest, but that’s the thing about the future. It’s pretty hard to really fathom what it’s got in store. 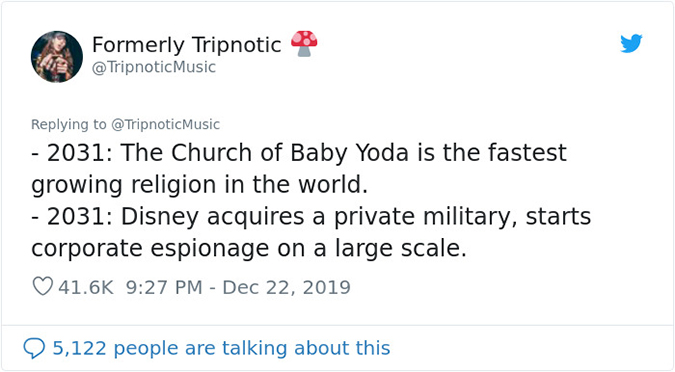 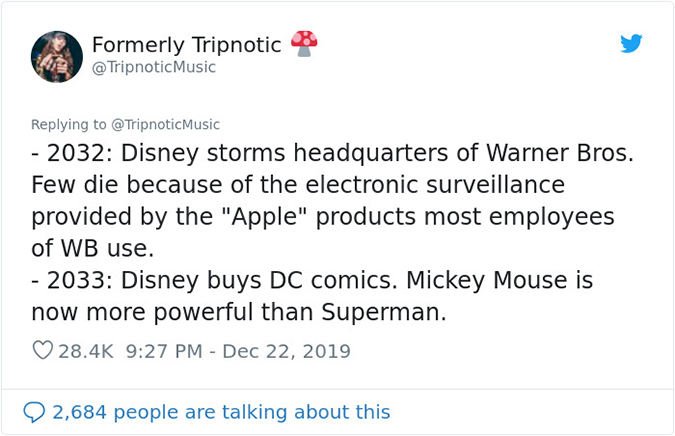 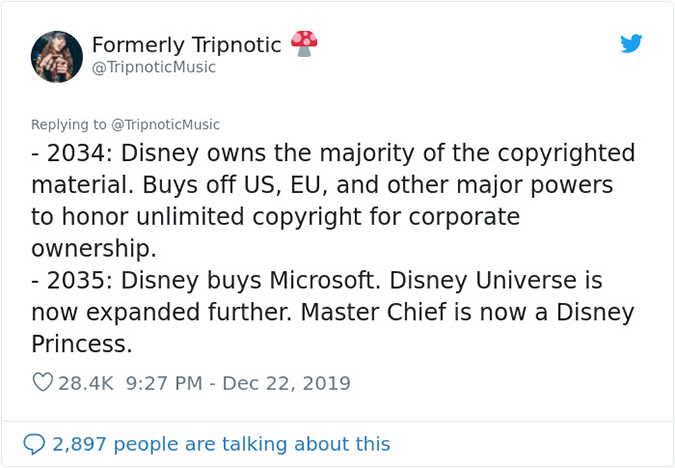 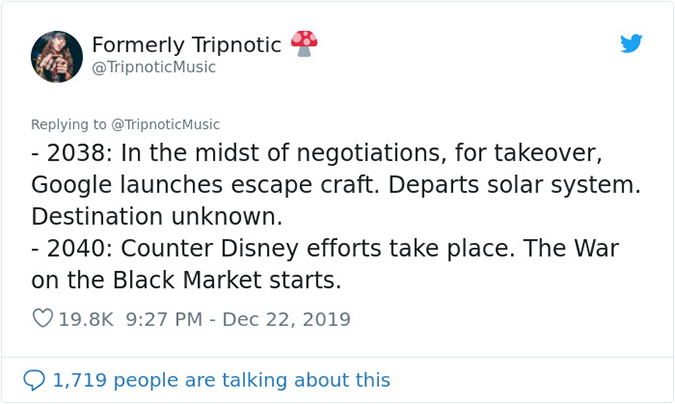 Only one company truly escapes Disney’s ruthless takeover: Google. Per the timeline, Google launches an escape craft while they were in the middle of negotiations with the now-all-powerful Disney Company. People form a resistance. War immediately breaks out. The first war zone is Hollywood. 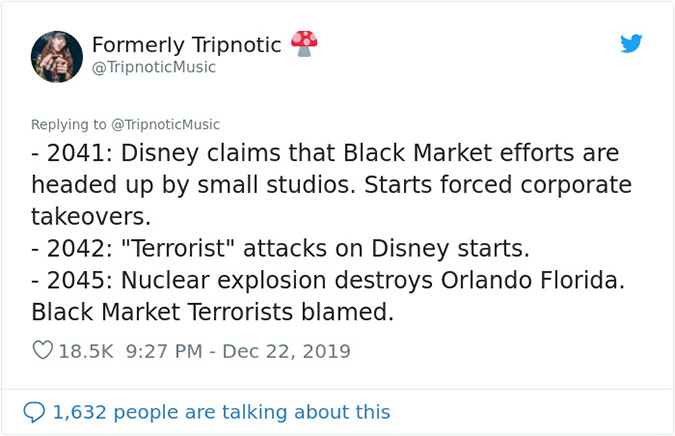 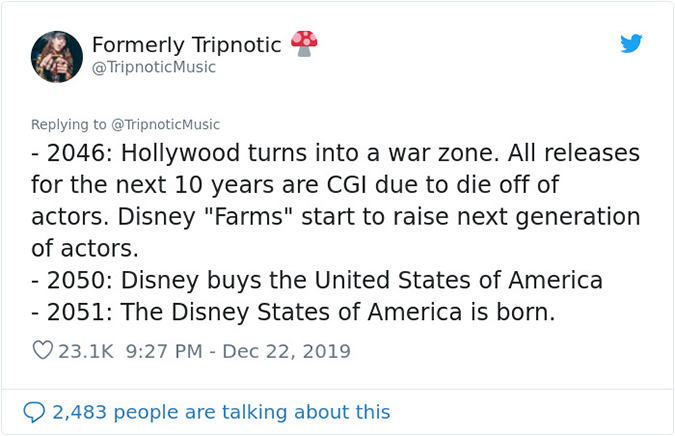 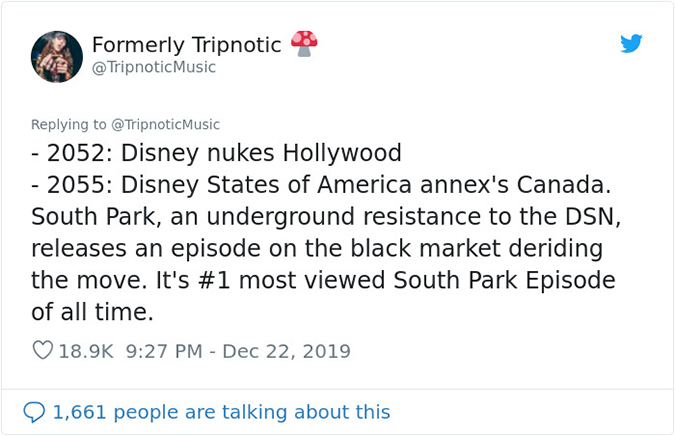 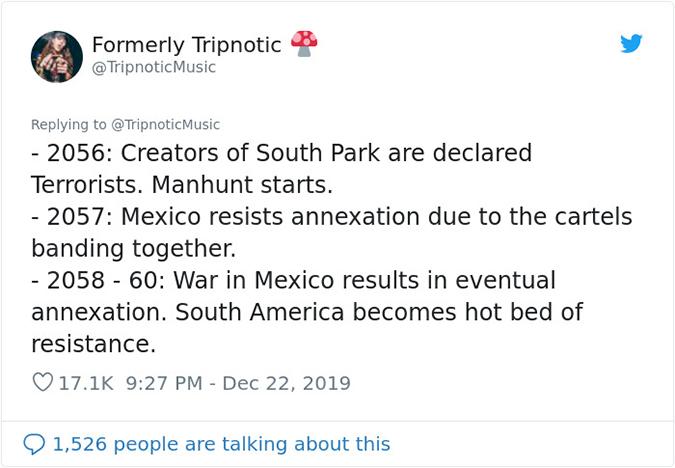 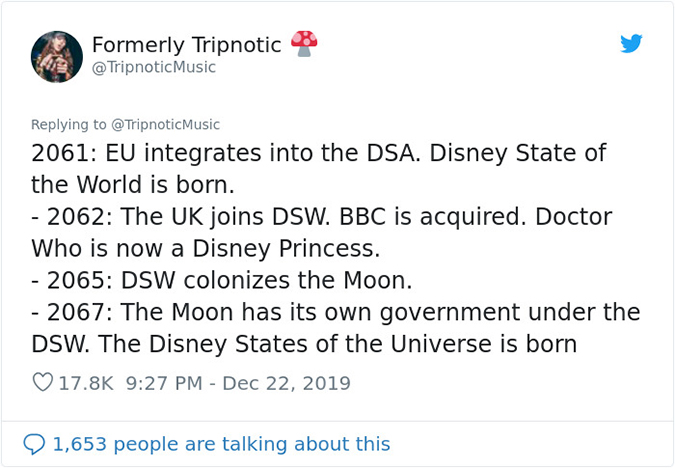 Then it takes over the universe

By 2065, Disney colonizes the Moon. Shortly after, they colonize Mars and they try to expand to Titan. Disney has total control over every country except for Switzerland, and the entire galaxy by 2092. In 2097, their explorations discover budding civilizations, and Disney States of the Universe annexes them under their control. Finally, at the end of Moreland’s action-packed timeline, Disney announces a new X-Men movie. 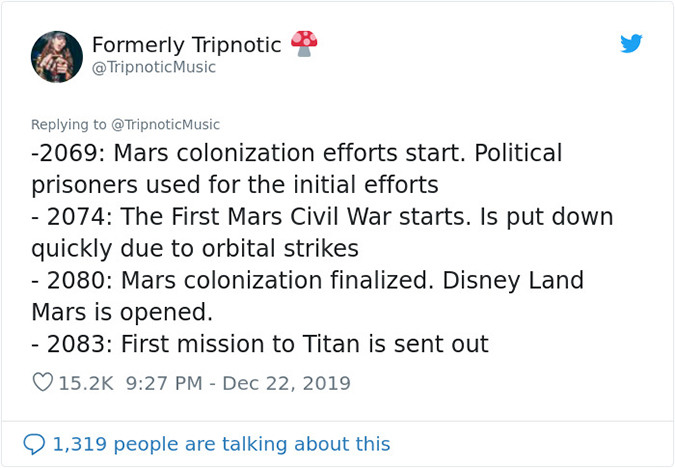 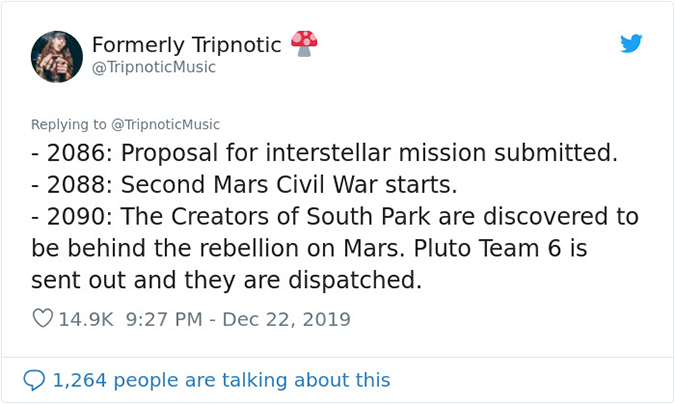 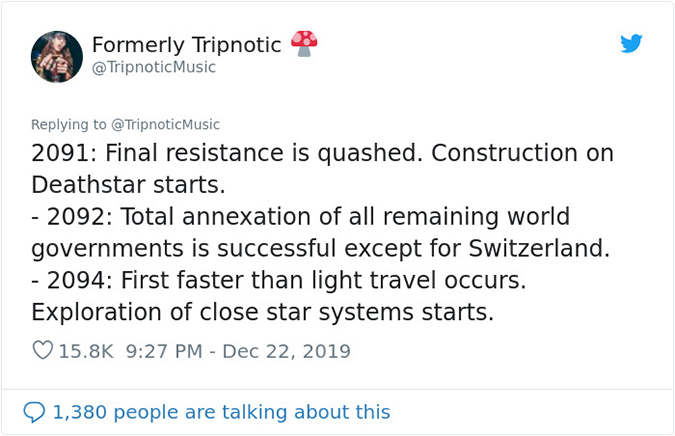 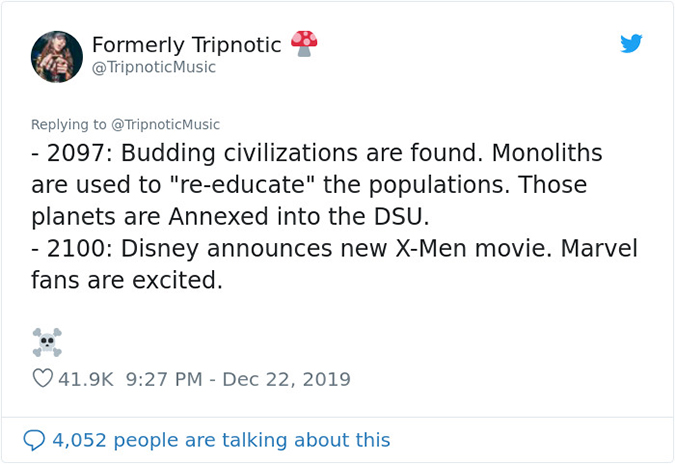 Whew! Moreland’s satirical prediction of how Disney will grow in the coming years would sure make an epic video game! There’s no denying that Disney has definitely cemented its position as one of the most powerful companies in the world. However, we hope things don’t get too out of hand in Disney’s future. What do you think of Moreland’s epic, intergalactic timeline? 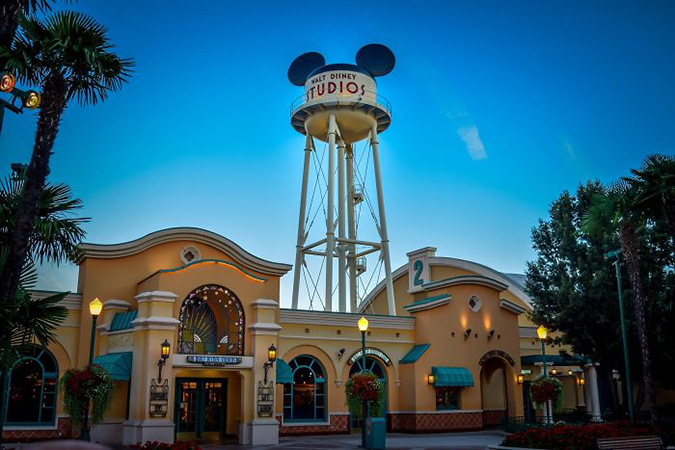