If you let your pet cat explore the great outdoors on their own, then you probably find yourself wondering about your pet’s whereabouts a lot. What does your kitty do when it’s away from you? Where does it go? Does it sit on top of a fence somewhere with a friend? Or does it go hunting for unwitting strangers to fall for their irresistible cuteness so they give them something to snack on without your knowledge? Well, one owner in the United Kingdom just found out about her pet’s adventures beyond their home and the whole thing was quite adorable.

Last month, 41-year-old Nicole Elise Clark from Abbey Meads in Swindon learnt about her 11-year-old pet cat Tula’s secret life. Tula’s secret life was revealed after she returned home one day with a paper collar around her neck. Upon seeing her feline explorer’s odd accessory, Cole immediately went to inspect it. And on the paper, a short but very telling message was written:

“Does this cat have a home
Always at Toby Carvery” 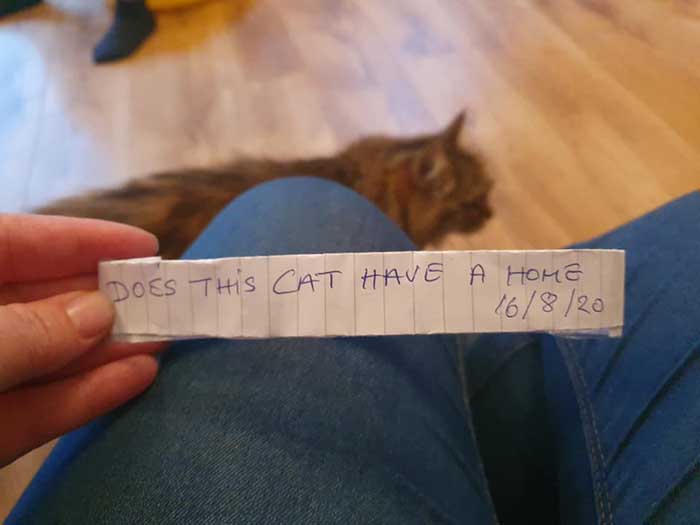 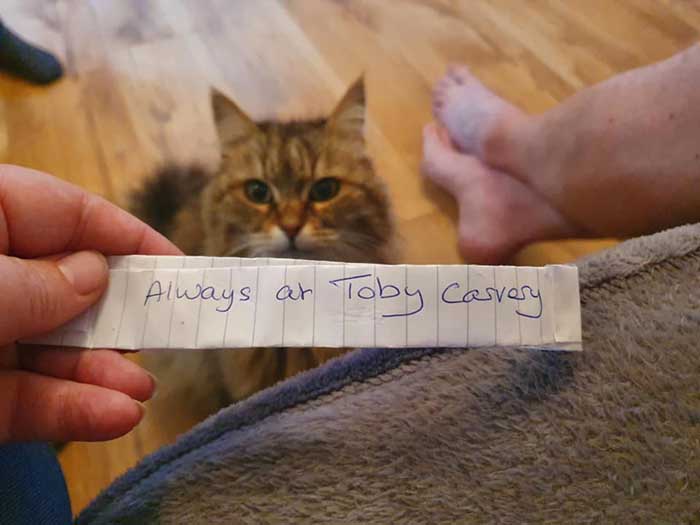 Toby Carvery is a local restaurant in Abbey Meads. It’s one of the restaurant chain’s 158 locations across the United Kingdom. It was definitely a funnily awesome moment for Clark to learn that her pet was actually a frequent visitor of the restaurant! However, this revelation of her pet’s “double life” didn’t really come as a total surprise for Clark. In fact, she probably had a hunch that her kitty was exploring the great outdoors in search for extra food… In a statement, she said,

“When I found out Tula was frequently at the Carvery, I was hugely amused and not overly surprised. She will go wherever her quest for meat takes her.”

When you squabble with Eeyore about who.is more gloomy!! #cat #siberian #petcat #meatloverspizza

After reading the note, Clark dropped by Toby Carvery to clarify Tula’s status

“The staff were thrilled that she wasn’t a stray and told me that they had tried to pick her up by bribing her with prawns, but she ate the prawns and ran off!” Clark shared. “Tula is normally at the Carvery for lunchtime and often dinnertime. She even pops back for supper sometimes.”

Apparently, this isn’t the first time that Tula has been caught begging strangers for food. But it’s not because she doesn’t get enough food at home. Clark assures us that Tula has a loving home, is provided with good food and a warm place to sleep at all times. Clearly, Tula just doesn’t want to miss out on the delicious morsels the world has to offer her!

“Tula has a history of following her nose and used to frequent an old person’s home where the old folks would feed her meat paste sandwiches!”

Tula likes eating meat over everything else

When asked to describe her pet’s personality, Clark said that Tula is a total queen. “She has a definite sense of cat entitlement and turns her nose up at anything less than meat!” Clark said. “She is beautiful but aloof.” With these descriptions from her owner, we can tell that Tula has a very distinct sense of self and knows exactly what she likes. Tula’s owner was so amused by the discovery of her pet’s double life that she shared the story to Abbey Meads Community on Facebook. The post was so entertaining that it got over 1.7K reactions and 1.3K shares on the platform!

Aside from Tula, Clark also cares for three other kitties, whom she refers to as Tula’s brothers. All the pets differ in breed. However, it appears that it’s only Tula who ever really ventures out in search of tasty snacks… for now, at least. “Her cat brothers haven’t yet spotted her scam and haven’t followed her to Toby, but she did bring home a sausage the other evening,” Clark finished. It’s certainly comforting to know what your pet is doing when she’s not home. Even more so when you know that she’s most likely just getting her chow on. Do you know what you feline friend’s been up to lately?