A mother’s love for her child is beautiful, extraordinary and wonderful. There’s nothing a mother won’t do for their baby – even if she happens to be a stray cat. A few days ago, a mother cat melted hearts all over the world when she carried her ill kitten to the emergency room of a hospital in Istanbul, Turkey. Emergency staff, despite not being trained to treat animals, responded to the anxious mother’ silent plea. Merve Özcan captured the moment and posted it online for others to see. On his post, Özcan wrote,

“Today we were in the emergency room of the hospital when a cat rushed to bring her offspring in her mouth.”

The mother cat was carrying her kitten by the scruff of its neck. In the pictures, you can see that while the mother seemed quite calm, her body language also conveyed the urgency she couldn’t express directly to the human medical staff. Despite this, the surprised medical personnel rushed the aid of the anxious feline mother. They surrounded the pair and quickly carried out a check-up to see what had caused the kitten’s mother to fret.

In a series of Tweets, Merve Özcan shared the touching story of a mother cat’s effort to make sure her ill kitten is okay

Even when the medics were tending to the kitten, its mother never left its side. According to medics, the nervous mother cat followed wherever the kitten was and never let it out of her sight. To ease her anxiety, the emergency staff offered some milk and food to help her feel more at ease. After they concluded that nothing was wrong with the kitten, the medics then proceeded to check its mother’s health. Fortunately, both cats appeared to be in good health. But to make sure, the hospital staff endorsed the cats to the care of a veterinarian.

Turkish people treat all animals with respect and kindness

The kindness that the hospital staff extended to the cat and its ill kitten is not exactly new for Turks. In fact, their kindness towards animals is one of the things they are known for. Being kind, generous and respectful towards animals is very deeply inculcated in the Turkish values. Stray cats are treated well – the people provide food, clean water and even shelter for them!

There are several stories that try to explain how this harmonious relationship between the Turkish people and cats began. Some say that it all began when the city of Istanbul was built. Back then, the newly built city was overrun by mice, so the people decided to get cats to deal with the problem. The grateful people then decided to let the cats roam free and live in comfort. Others theorize that people treat stray cats with respect because they were the only creatures allowed inside Prophet Mohammed’s prayer room. And another possible reason for their incredible kindness is that they see it as a religious duty to care for animals as a respect to Allah.

As of writing, over 88.4K people have liked Özcan’s tweet. It has also been re-tweeted 6.4K times. The viral heart-melting moment has also become a hot topic in Reddit, where it has received over 83.8K upvotes. People from all over the world were touched by the cat’s motherly gesture of love for her sick kitten. Aside from that, people also marveled at how trusting the stray cat was to the humans, and some were happy to share Turkey’s unique friendship with cats.

It’s certainly surprising to witness a stray cat rush to a human hospital to ask for help. But getting to witness human kindness in action together with this solid demonstration of a mother’s love is certainly an amazing experience for all of us. It’s certainly a perfect story, with Mother’s Day just a few days away… so don’t forget to show your Mom how much you love and appreciate her! 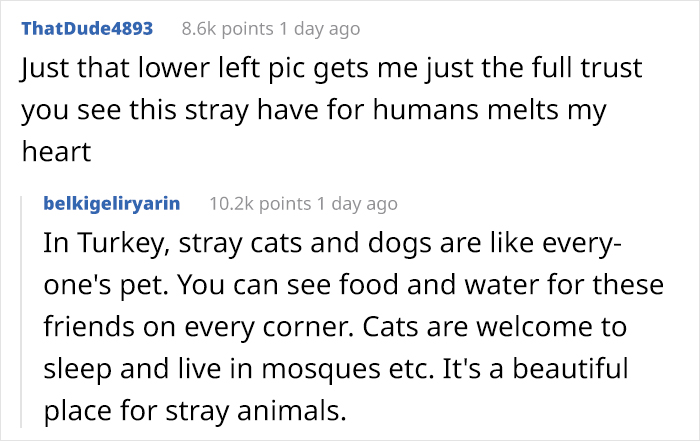