If it’s your first opportunity to take a look at this hallway and its tile floor, you’d probably think it’s just way too warped for you to be able to cross with safety. Apparently, one side is going to sink! Actually, though, that side is perfectly just flat. Yes, it’s such an impressive optical illusion.

Found at the Casa Ceramica showroom located in Manchester, England, this eye-catching, vision-fooling walkway is actually an award-winning one. Its checkerboard design has 400 porcelain tiles in all — all cut in custom. The result? A walkway that creates an optical illusion if you look at it from the front door.

So, where can you ever find this? It’s in one of the Manchester showrooms of Casa Ceramica, right at the entrance. When visitors come and enter, they will find themselves stuck in fascination! They would even pause from walking down the mind-boggling aisle, somewhat feeling fearful.

Of course, the floor appears to be melting or have melted. So, if you’re one of the passersby, you could literally feel like being in Alice in Wonderland! You would rather feel like walking, too, instead of running.

Did the designers ever think of installing the flooring just to stop visitors from running through this hallway?

No, not really. They simply want them to stop 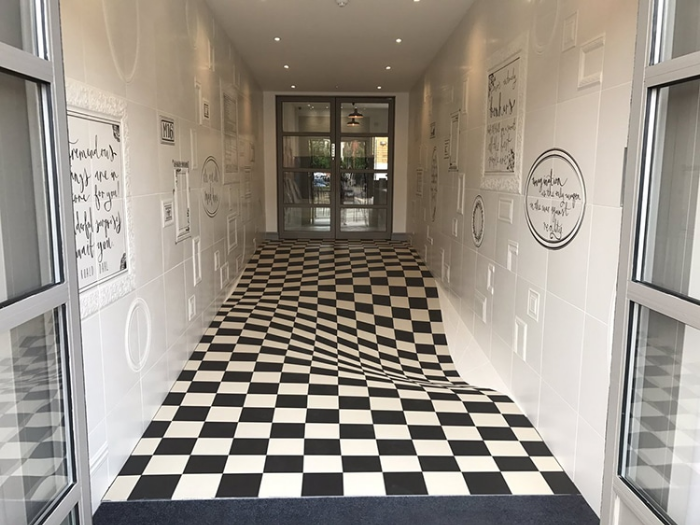 and take time to adore the grand illusion.

Well, there’s actually more to this storybook-like entrance: it has quotes! The local artist Myro Doodles received the worthy task from Casa Ceramica. So, the artist hand-painted some quotes from “Alice in Wonderland” itself, as well as from Tony Walsh’s “This Is The Place” and Roald Dahl’s “Willy Wonka.” The quotes (especially from “This Is The Place”) served to honor the victims of the Manchester attack way back in May 2017.

Interested? Check out this twisty hallway for a kind of optical illusion you will never forget.

They are actual tiles pic.twitter.com/7HvTqz9jHP

The tile floor has an optical illusion that is classified as anamorphic. This means you will see the illusion from a specific perspective. And yet, you’ll witness the distortion if you try to view it from other angles.

I suppose it only works from 1 perspective?

The staff at the Casa Ceramica show how you can navigate the wobbly tile floor walkway.