It seems that Shedd Aquarium started a domino effect among other animal parks everywhere. We’re seeing more and more adorable animal adventures as days pass and we’re absolutely loving each one! And now, the Texas State Aquarium has joined in on the fun! The aquarium has taken their local celebrity Chico the Sloth to explore. Normally, the sleepy-eyed sloth is swarmed by guests, but now it’s his turn to be the aquarium’s guest!

Chico the Sloth is 3 years old, and an apparent crowd favorite. After all, sloths are pretty interesting, despite their extremely docile nature. But just because they’re slow doesn’t mean that they don’t deserve adventures. So a handler took Chico out of his enclosure together with his favorite branch. Together, they visited several other enclosures. 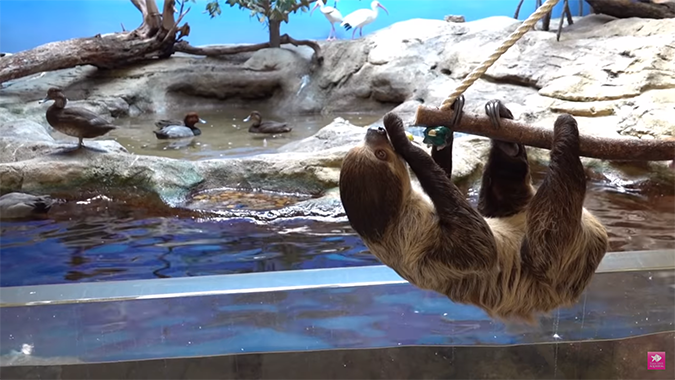 On his exciting field trip, Chico the Sloth certainly got to meet a lot interesting characters. He got to visit colorful fish, ducks, seahorses, jellyfish, sharks, and most notably, the dolphins. Chico’s field trip is only one among the many adventures Texas State Aquarium’s letting their residents have these days. And even though he was more interested with his snack than the ducks, the seahorses and jellyfish sure had his attention! According to a staff member, taking their residents a tour isn’t exactly new,

“We frequently give the animals a chance to “meet” each other as a form of enrichment, which helps keep them active in body and mind. As some of our most popular animals, it seemed an obvious choice for our sloths and dolphins to get a chance to see each other while we were temporarily closed. We have another sloth, Xena, but on that day, she was more interested in sleeping than meeting the dolphins!” 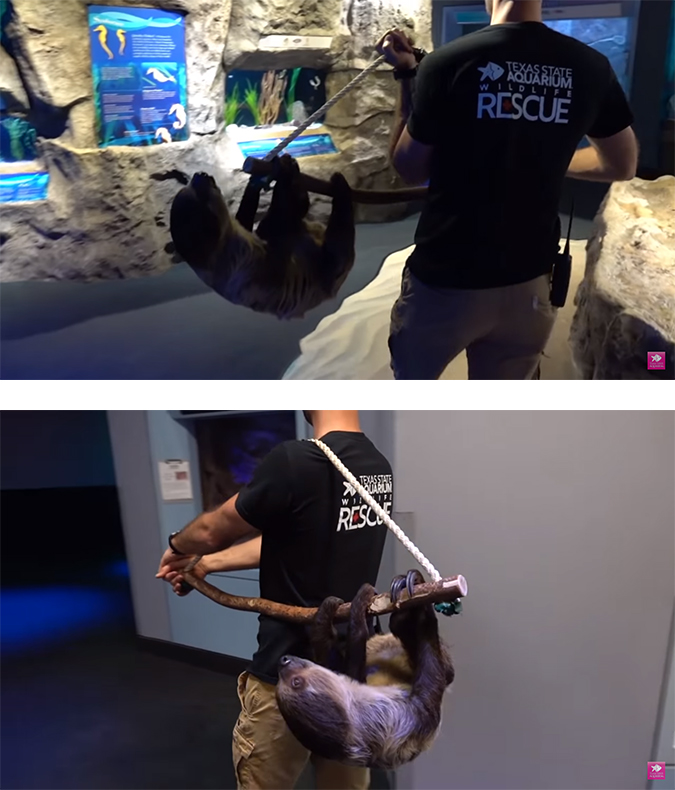 Sleepy-eyed Chico the Sloth seemed specially interested with the seahorses… 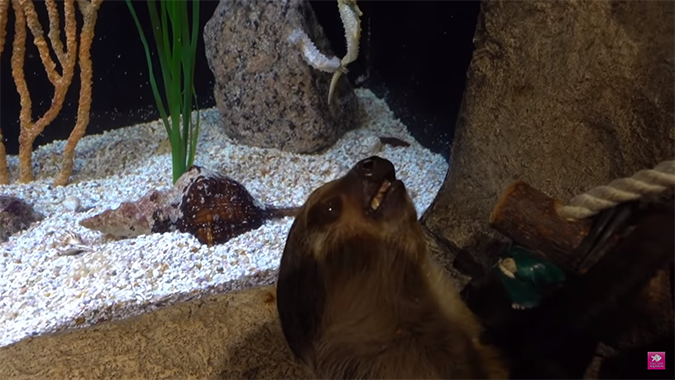 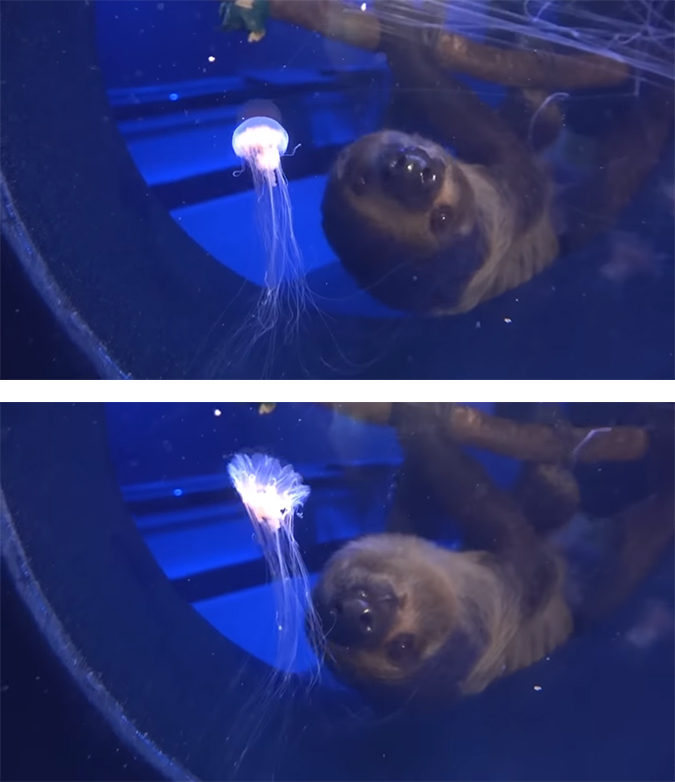 …and the sharks definitely had Chico’s eyes wide open 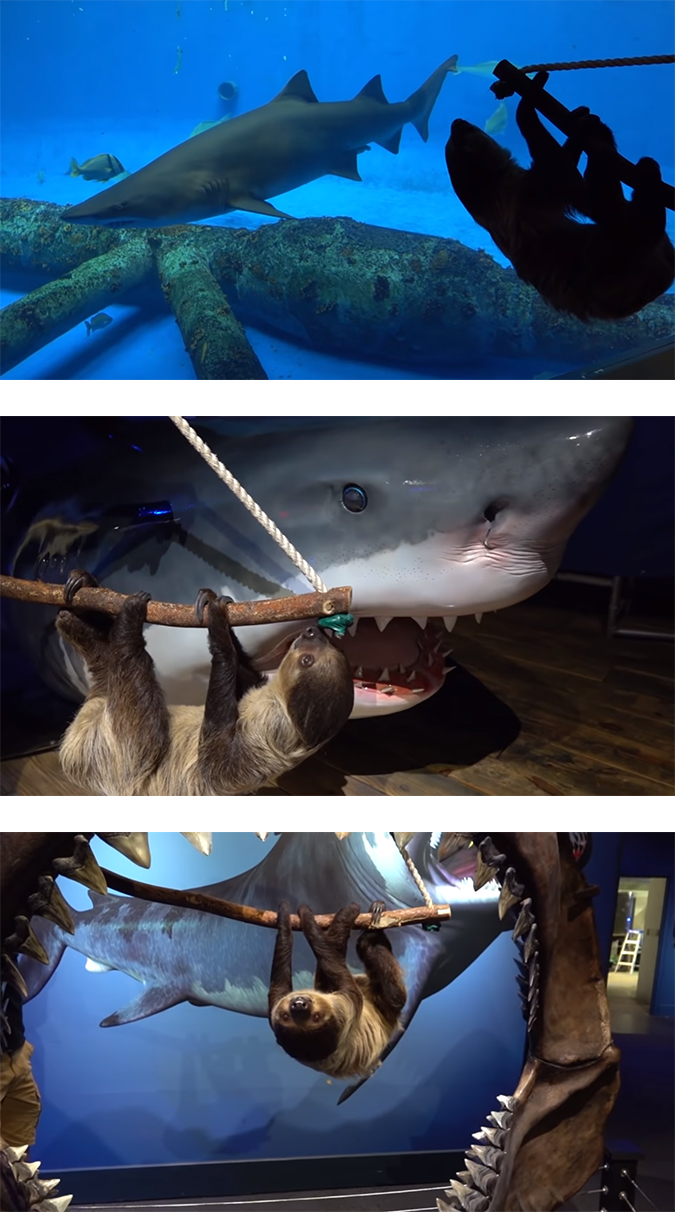 The end of Chico the Sloth’s field trip, his handler took him to meet the Aquarium’s resident bottlenose dolphins: Shadow, Kai, Liko, and Schooner. The four male dolphins were visibly excited at the sight of Chico. The dolphins immediately tried to imitate Chico by swimming belly-up! The dolphins are always meet resident animals from the aquarium, a staffer says.

“Our dolphins have the opportunity to meet several animals over the years, including baby gators, an African serval, a red-tailed boa, and others. They’re almost always very curious about the other Aquarium residents. They lucky four who got to meet Chico last week were the four male bottlenose dolphins Shadow, Kai, Liko, and Schooner.”

“We’re striving to share as many of these stories as we can with our guests and viewers around the world to keep them engaged, educated, and entertained while they’re at home. Right now we’ve had the most success through social media posts like this one, along with virtual views of our animals and daily live distance learning programs.”

Watch his adventure below

People had some pretty interesting things to say