Being an educator is one of the most noble professions one can undertake. After all, educators play a significant role in the development of youth who will later on be responsible for the future. But sometimes, it can be a little vexing when trying to figure out how to make learning interesting for students. So it’s important for educators to find a reason to say, “This is why I teach!” when they feel their motivation or energy dipping.

This is exactly what happened to Amanda Cox, an elementary school teacher from Beaumont, Texas. Her incredibly heartwarming story began when she noticed that her pencil stock was running low. So she decided to ask her students to pull out any pencils they had so they could pool them all together so everyone would have a pencil to use. The class followed her instructions, except for one boy. He asked her if he could keep the pencils his Mom had given him.

At first, Cox let him keep the pencils. However, the boy soon changed his mind and gave some of his pencils away so his classmates could have them too. This gesture is adorable enough on its own. But Cox later discovered the touching reason why the boy hesitated to give away his pencils the first time.

This Beaumont-based educator found a reason for her to say ‘This is why I teach!’

Cox eventually noticed the special detail that made her student’s pencils so precious when she began sharpening them. The boy’s mother had written encouraging messages on his pencils. She immediately asked to see the rest of his pencils, and saw that the parent had really gone the extra mile to put encouraging words on the boy’s pencils. No wonder Cox’s student valued them so much!

On the pencils, you’ll see a variety of affirmations written by the student’s parent using a red marker. The pencil Cox had sharpened bore the message, “You are so talented!”. The endearing gesture prompted Cox to write the viral Facebook post that earned over 600K reactions, 45K comments and 431K shares. In her post, she spoke about the positive effect that the pencils had on her student. These were the heartwarming messages written on the pencils below: 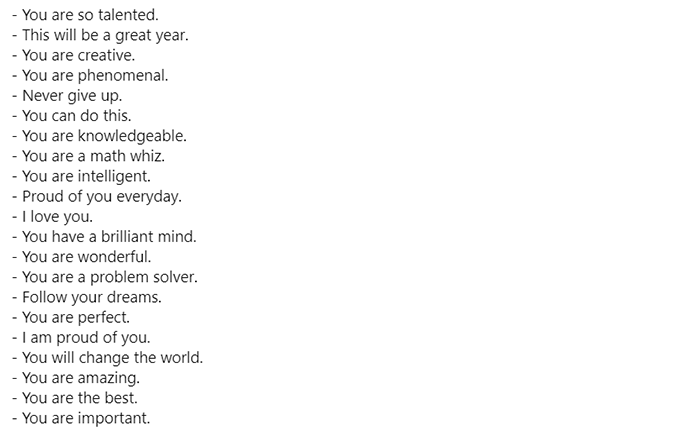 “This probably took his mom a few minutes to do yet it lit up his whole day at school. He wasn’t embarrassed that his mom wrote on his pencils. Thanks to his mom, he was reminded of his self-worth and wanted to share the same feeling with his classmates. These are things that we should be reminding our kids (both parents AND teachers). Imagine the look on a child’s face when they are reminded that they are important, talented, loved, knowledgeable, and so much more. Help them know that someone believes in them and is proud of them in everything they do.” 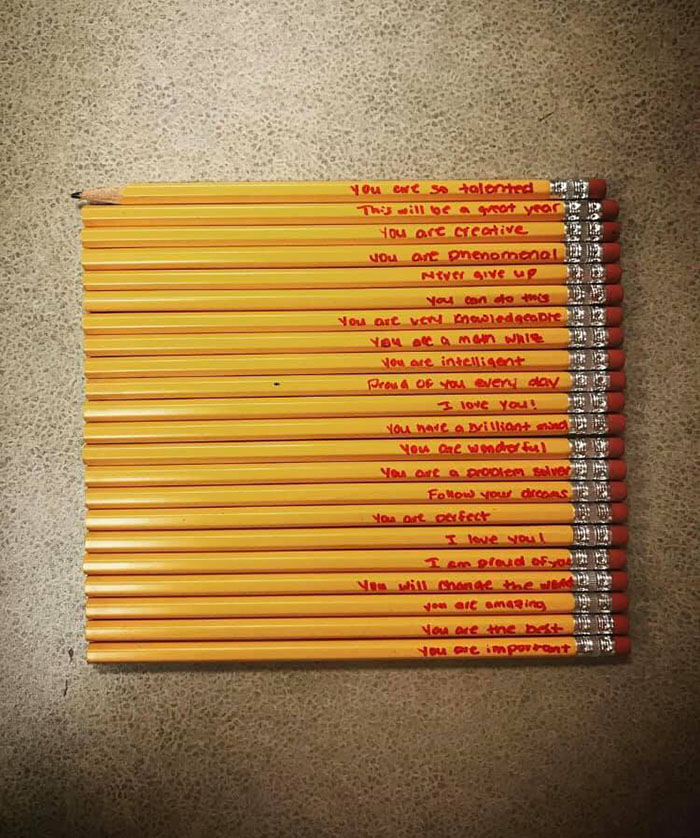 Affirmations were written on her student’s pencils

“Even if you think it is cheesy or you don’t have enough time or that you have little impact, remember that you may be the only one telling and reminding them these things and EVERY kid needs to know their value. This is why I teach.”

The pencils cheered up Cox as it showed that her message of encouraging her students was getting through to their parents. Young learners, need more encouragement and affirmation than their grown-up counterparts, after all. Children will encounter many things for the first time. Being in a new environment and trying to make new friends while absorbing lessons will put plenty of pressure on a child. So the adults around them have to be extra careful and sensitive towards their needs.

A few positive words will make a world of difference for anyone, especially if they’re going through a difficult time. So if you’re looking for a way to push your little one, you might want to take some inspiration from this!