Everyone has that one teacher who tried their best to make you learn and who shown that they care. Well, Verónica Duque is that teacher for the kids in her class. The 43-year-old teacher wanted to engage the students in a different and more high level way. So, she gave the class an anatomy lesson and she was wearing a full-body suit that mapped out the human body in a lot of detail.

Verónica has been a teacher for 15 years and she teaches natural and social science, art, English and Spanish. She currently teaches the third grade and is always searching for new ways to make lessons more interesting and engaging. This body suit idea came around when she “was surfing the internet when an ad of an AliExpress swimsuit popped up. Knowing how hard it is for kids this young to visualize the disposition of internal organs, I thought it was worth it giving it a try.”

Her husband Michael Tweeted Some Pictures From The Anatomy Lesson

The tweet instantly became a hit online. Since then then it has 14k comments and over 65k likes. The tweet and images have made her a symbol of dedication and creativity. However, this success won’t stop her. Verónica is still looking for ways to surprise her students. One of her other ideas was featured in a history lesson,

“I decided long ago to use disguises for history lessons”.

She then said “I’m also using cardboard crowns for my students to learn grammatical categories such as nouns, adjectives, and verbs. Different grammar kingdoms, so to say.” “I’d like society to stop considering teachers to be lazy bureaucratic public servants. We’re certainly not.” 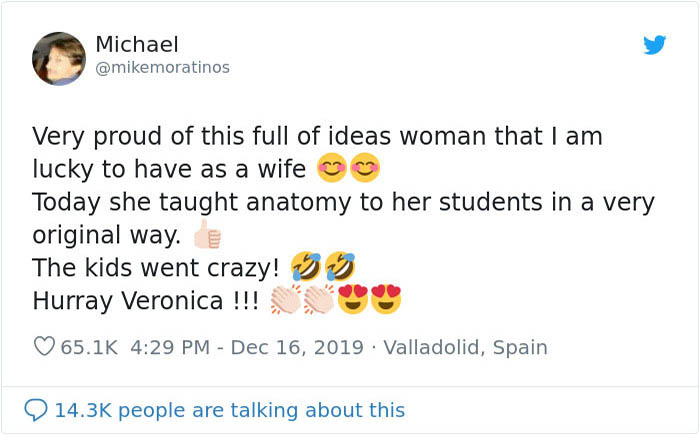 When people saw Verónica in the body-suit a few people talked about Slim Goodbody. Slim Goodbody is a character who wears a costume. John Burstein created the character and John has been a champion of children’s health for over forty years. Now millions of children watch his productions on Discovery Education.

Thousands of children a year also watch live theatre shows around the US. He has also published many children’s books and his work has won awards from World Health Organization, the Corporation for Public Broadcasting, Parent’s Choice and the President’s Council on Physical Fitness and Sports.