On Valentine’s Day of 2019, a Canadian woman suddenly heard a noise coming from her backyard. When she went to check where the sound was coming from, she saw a cold stray cat knocking on her window in the snow. The shivering orange tabby meowed while pawing at the door as if it was begging to be let in.

The woman, who is coincidentally a foster volunteer, took a photo of the stray cat and sent it to Marie Simard, the founder of Un Chat à la Fois, a kitten rescue in Quebec. Although the rescue center only accepts orphaned or sick kittens at risk of euthanasia, Simard didn’t think twice in accepting the adult ginger cat who was obviously in need of urgent help. She told the volunteer to take the cold feline to the vet immediately. The foster volunteer did as she was told, took the poor kitty in and brought out the carrier so she could transport him to the vet. 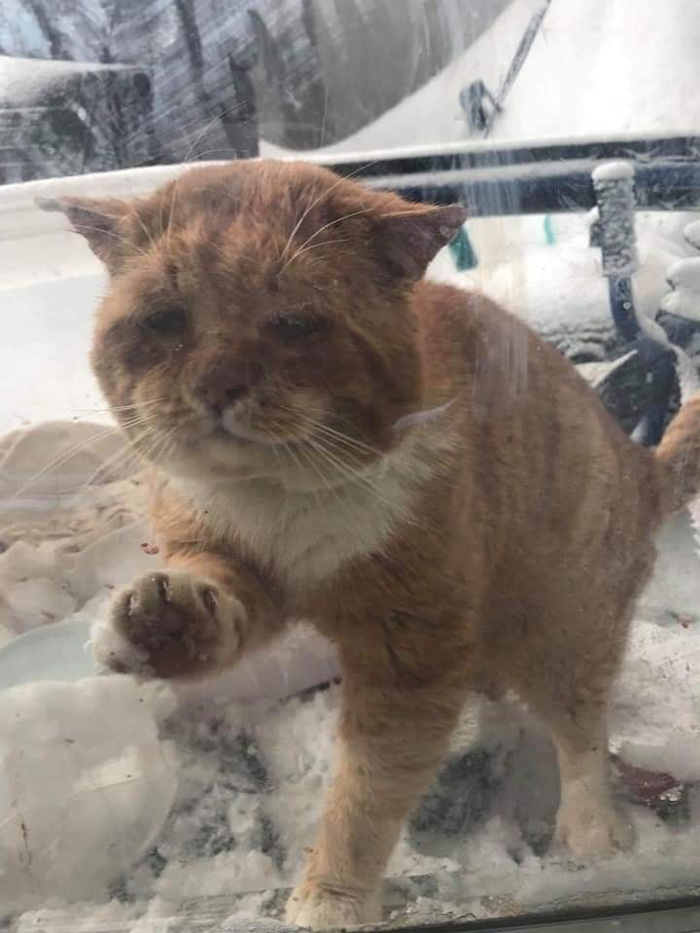 Surprisingly, the stray cat obediently walked into the carrier by himself. Even when he was transported to the vet clinic, he remained calm in the carrier. When they arrived at the clinic, he was relaxed and submissive while the staff were checking him up. Simard saw how the rescue kitty underwent various medical tests in a very easy-going behavior which was very unlikely for a feral cat.

After a physical examination, they found out that the stray cat had frostbite, rotten teeth, and a bite wound. These indicate that the orange tabby had a rough life, had been fighting every day for his life, and his exhausted body had almost succumbed to the harsh winter. In fact, he would have died of extreme cold if he wasn’t rescued immediately. Further test results also confirmed that the kitty had diabetes, skin allergy, and blood tests yielded bad results. So he had to stay in the clinic for a few days for his treatment and recovery.

“We thought he was a lost cat because he was just too friendly to be born outside.”, Simard recalled. He didn’t have a microchip and was not neutered. We assumed he was left behind by irresponsible owners, we have many cats left behind by people—people that cannot afford to pay the vet care. We checked everywhere for a missing cat but we found nothing.”

Simard named the stray cat Aslan as a reference to the soft-spoken lion in The Chronicles of Narnia series. After a series of successful surgeries, Aslan quickly recovered his health and strength. Simard was always there to monitor his progress and claimed that Aslan was very friendly to the staff and would even let them pet him. He was later discharged from hospitalization so he can complete his recovery at a foster home.

Simard found him a loving foster family who would take care of him until he completely recovers and gets ready for adoption. But when it was time to put him up for adoption, his foster parents decided to keep him instead. Aslan is now living happily with his new family which also includes two rescue cats named Cleo and Jasmin.