Do you have a friend who’s 200-cm or 6’6” tall? Then surely you have that experience of going to a concert together, and hearing all the short people behind you murmur. Apparently, the problem is more common than you think it is. The good news is that one guy named Dominic Wilcox has created a fascinating solution. It’s the One Foot Taller Periscope Glasses.

Yes, the name implies what the thing does. It actually allows the wearer to experience being a little taller—at least in terms of what he can see. Literally, if you would wear the device, you could see 30.5 cm or one foot taller than what the average eye level would. 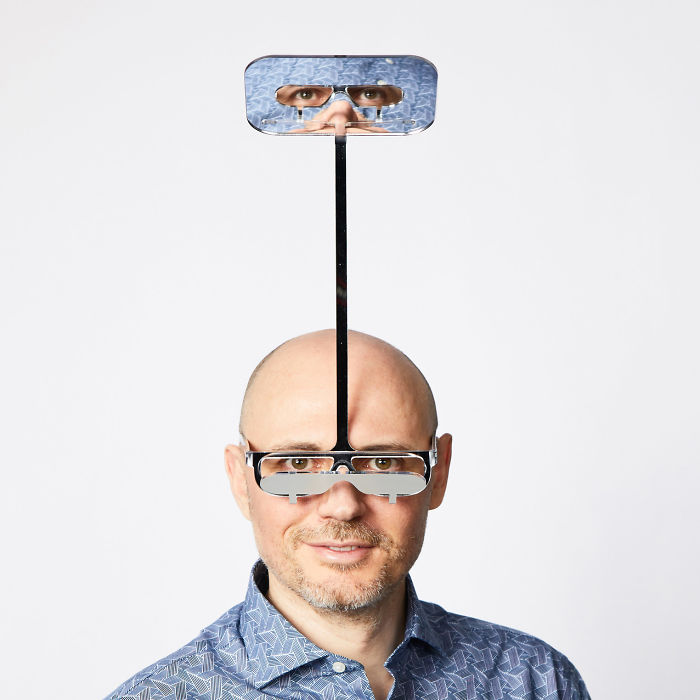 “I was challenged by Microsoft Surface to think up some everyday problems and come up with some interesting or extraordinary solutions. It was for an exhibition in London in May. A few weeks earlier, I was at a gig standing near the back, and I noticed a small woman dancing behind me who clearly couldn’t see the band because of all the tall people around. This gave me the idea to try to solve that problem. Also, I think we’ve all been at the cinema and someone big sits in front and blocks the view, this device could help, as long as you don’t block the view of the person behind you!” 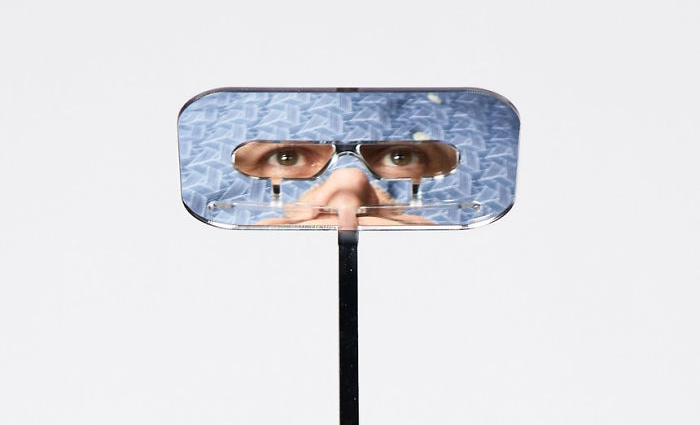 For Wilcox, the most time-consuming part was the thinking as well as the designing. Here’s was he further relayed:

“I did have about five attempts at making the finished object. I cut my finished design out of a sheet of mirrored plastic then very carefully heated and bent the parts into the correct angles to reflect the light from up high, down to the eyes. I quite enjoyed working out how to make this quite unusual and functional object from one single sheet.” 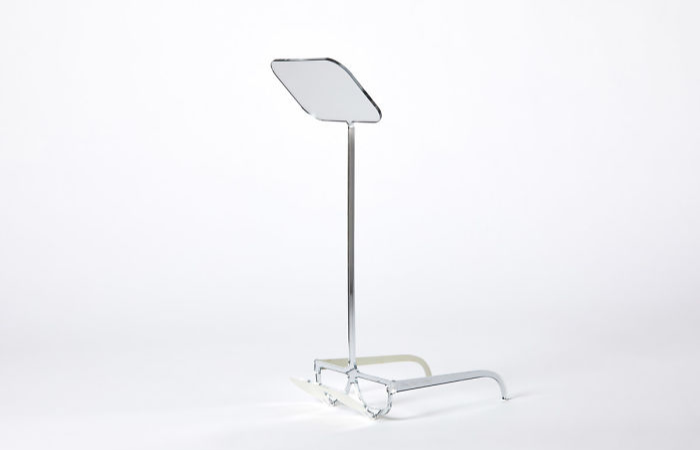 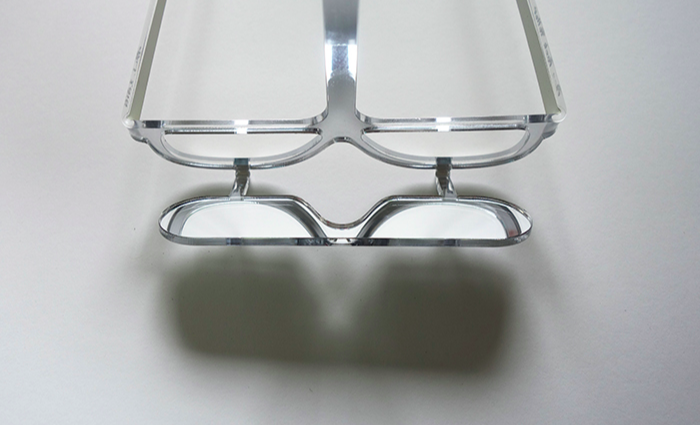 “I’ve been designing unusual things for many years, so that helps speed up all the little decisions you have to make on any design project. It took about a week of thinking, testing, failing, more testing, etc. to go from a doodle to the end piece.” 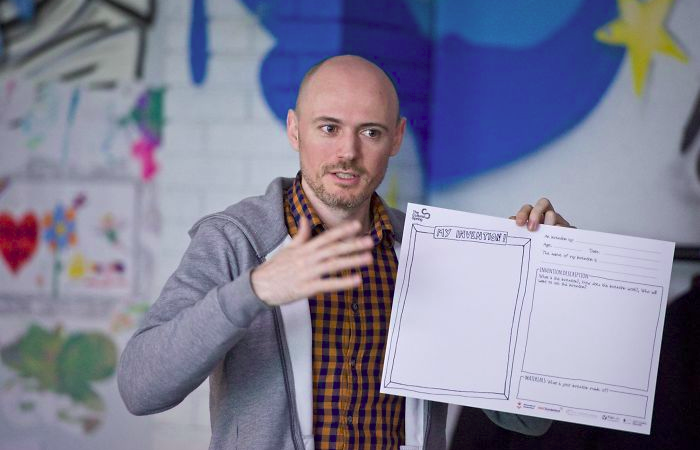 “You can see a rectangle in the center of your vision of the higher view. It’s a sort of slightly bonkers analog AR device.” 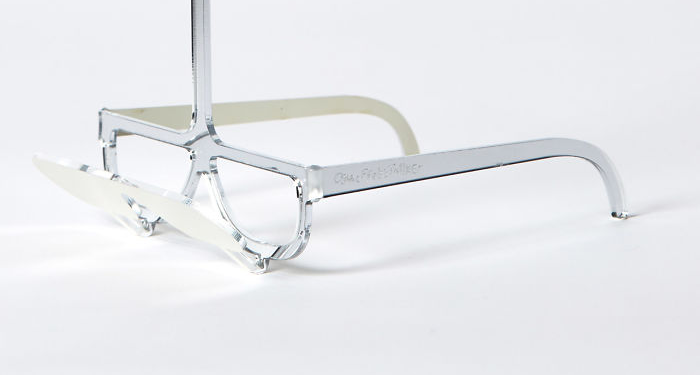 Dominic Wilcox has had other fascinating inventions such as the “Directing Jacket.” 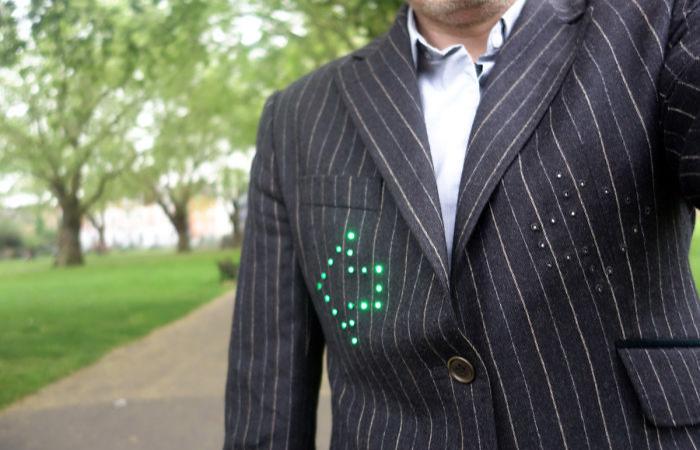 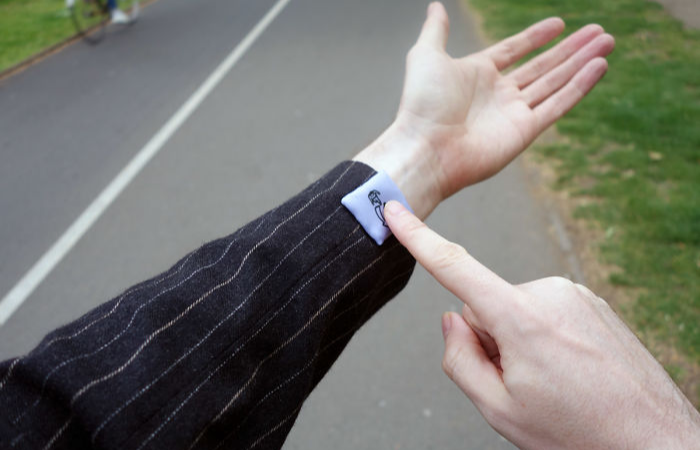 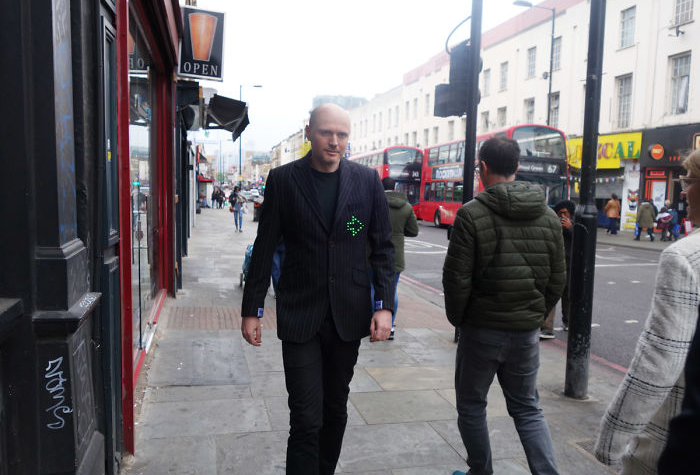 Wilcox has also created a combination of snow shoe-grips and ice tray. 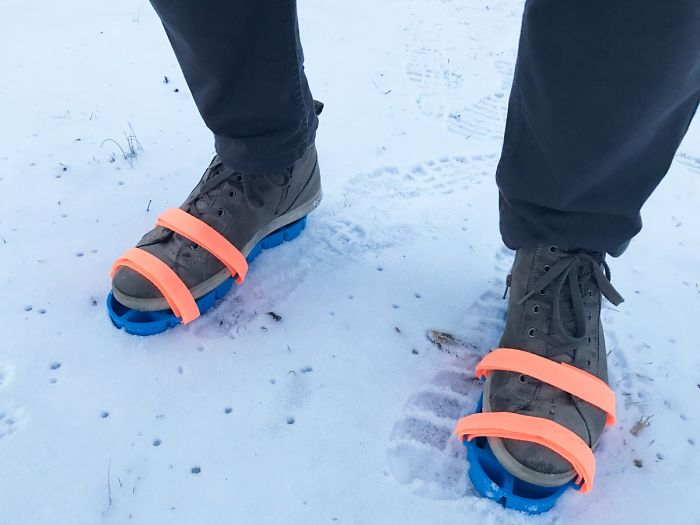 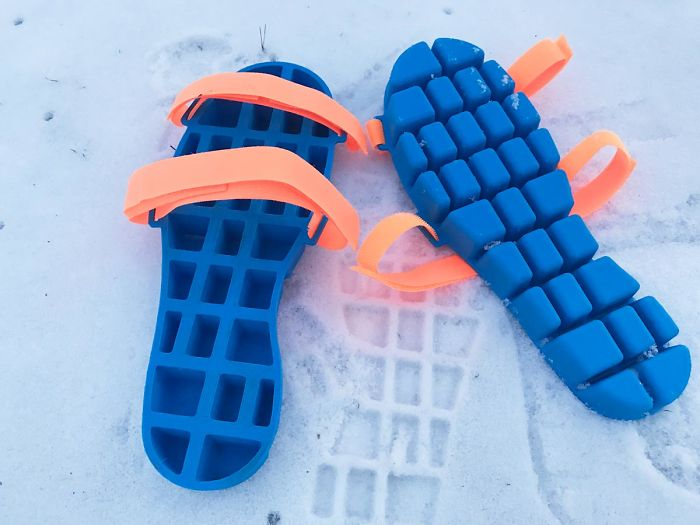 He also had a “No-Place-Like-Home GPS Shoes.” 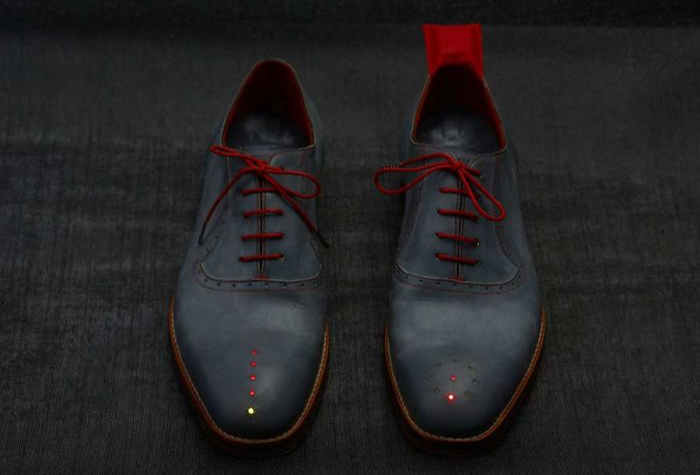 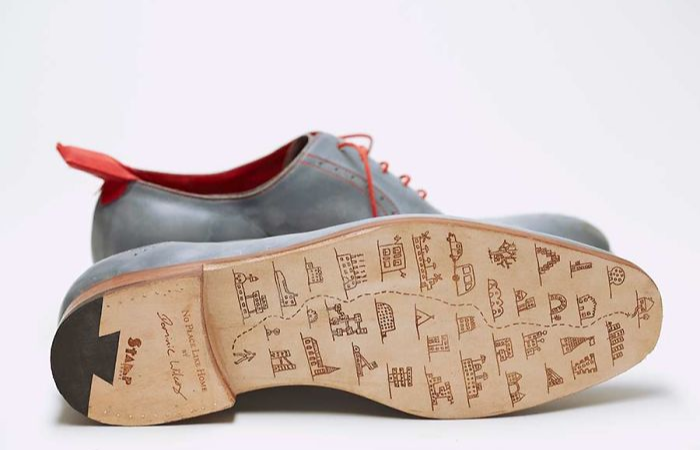 Plus an amplification device for a rumbling tummy. 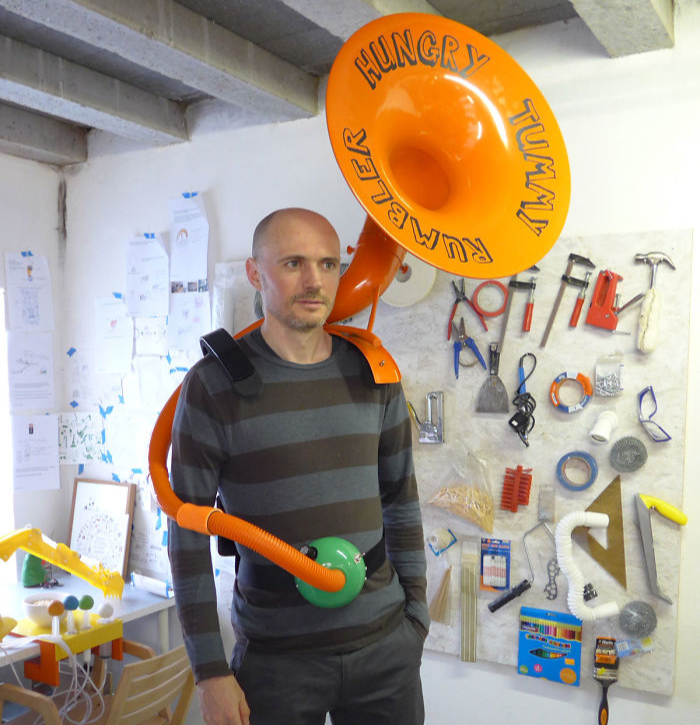 Here’s his “Binaudios” that can let you listen to “the sounds of a city.” 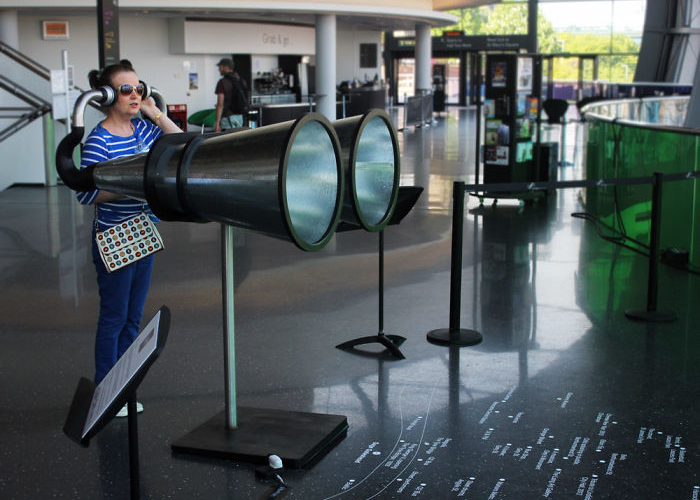 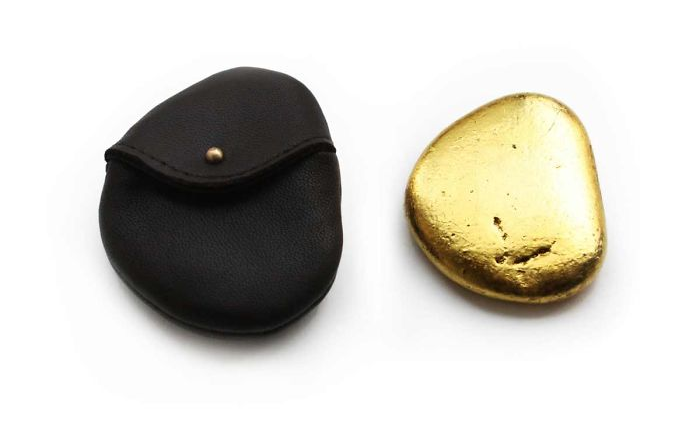 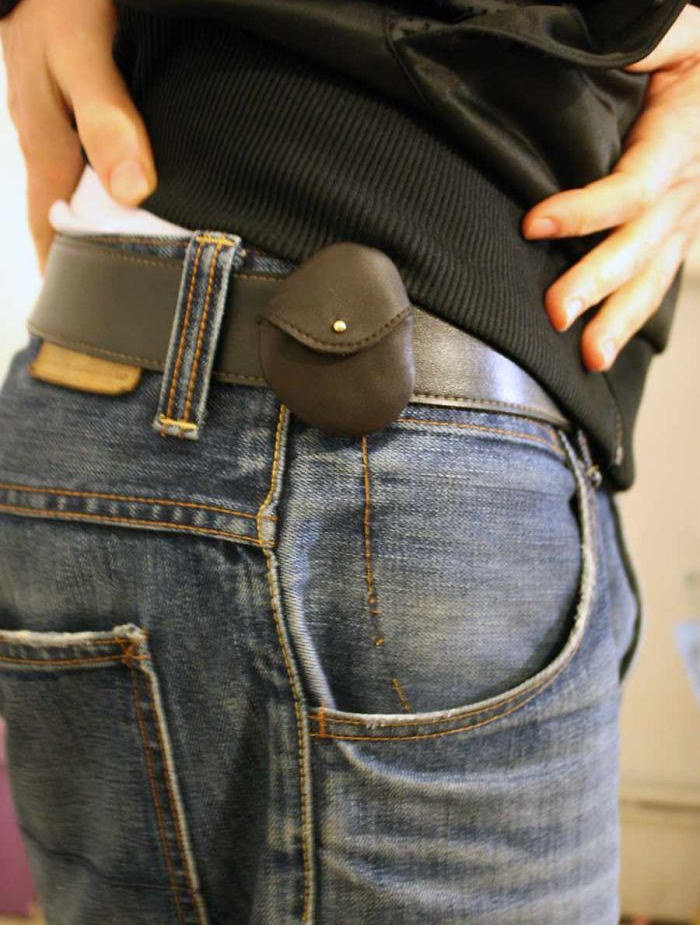 About the One Foot Taller Periscope Glasses—here’s how some (probably) short people reacted.