Have you ever found yourself wishing you were at the beach while lounging at home after a long day at work? If so, you’re not alone. It’s a sad reality that most of us live too far away from the beach to fulfill this longing on a whim. As luck would have it, two creatives got together. And the result of their collaboration is the absolutely mesmerizing ocean waves resin table and bench set!

Jared Davis and Rivka Wilkins are the artists behind this mesmerizing table. Davis does woodwork, while Wilkins employs a unique resin technique to capture the spirit of the crashing ocean waves. According to Davis, he approached Wilkins for a collaboration after stumbling upon her work on Instagram. The woodworker was kind enough to recount how their partnership came to be:

“She seemed totally genuine and actually our first collaboration was a giveaway for my 40k follower mark. I had her do resin waves on that first bench and we gave it away. It went so well that we decided to be partners and start building more of them!” 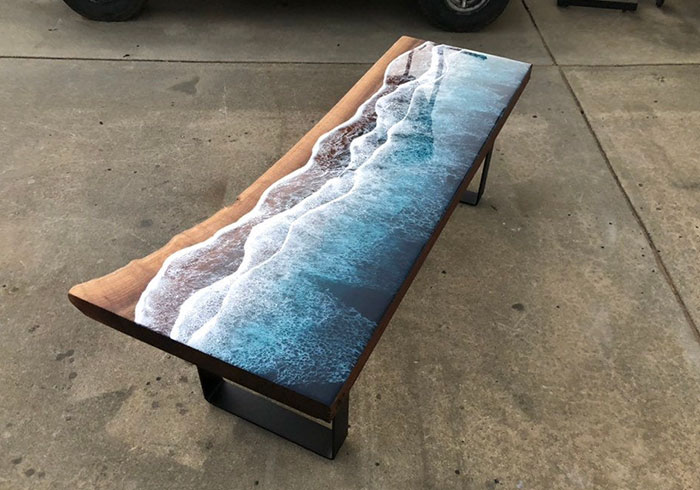 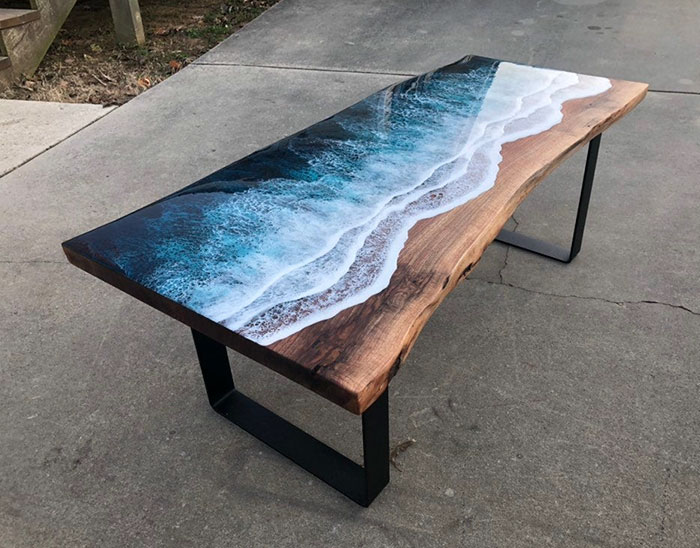 To create their masterpiece, Davis selects a live edge slab. He then cuts and sands the slab to length before shipping it to Rivka. Once she receives it, Rivka then works her resin magic on the slab. With her masterful resin layering technique, the waves form on top of the slab. When the wavy slab returns in his workshop, he finishes off the piece by sanding the top of the slab (that’s not covered by waves, of course). Finally, when he’s done measuring and ordering the table’s legs, he assembles it all together. 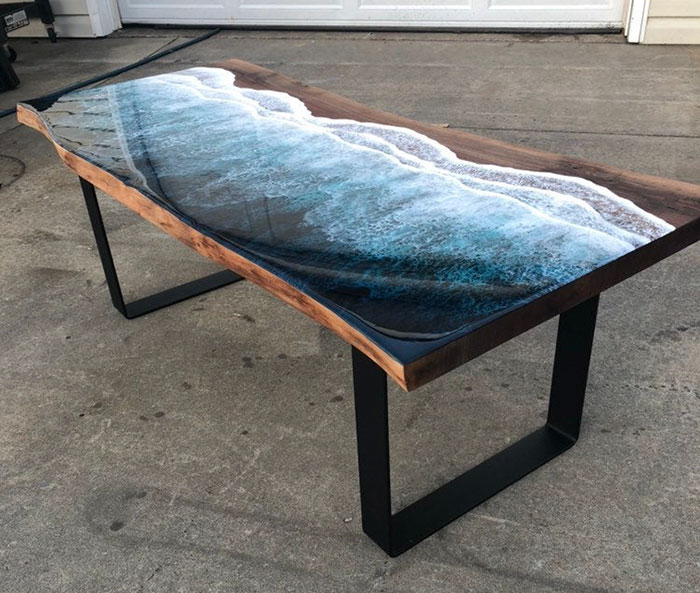 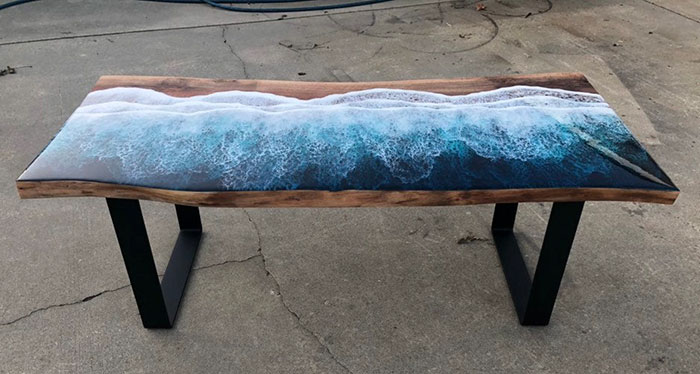 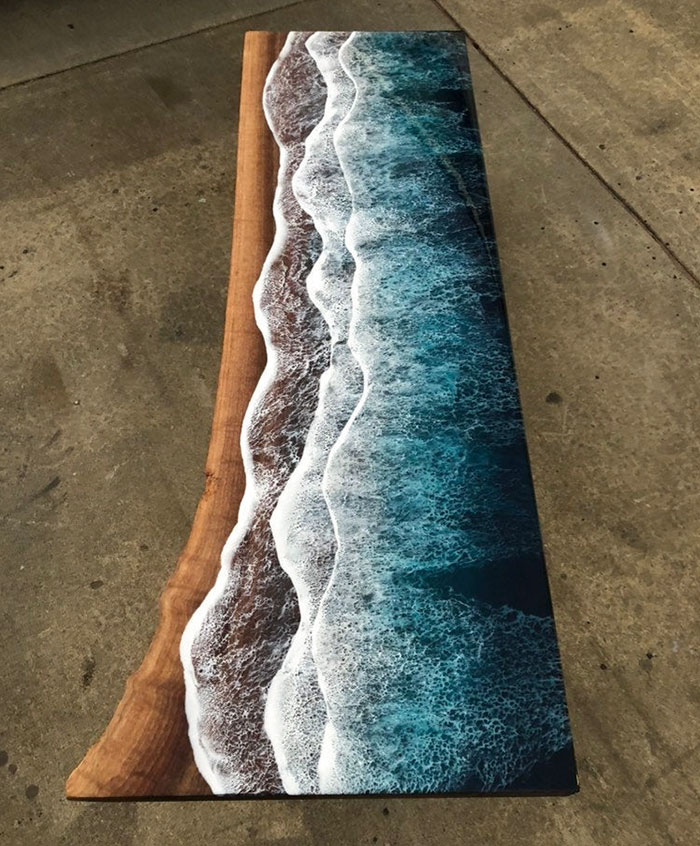 “It just seems like a supernatural pairing of two things that we find in nature. Although the resin isn’t actual water, Rivka creates the effect better than almost anybody. So seeing those waves follow the natural curves of the live edge slab which mimic the natural curves of a shoreline is truly unique.” 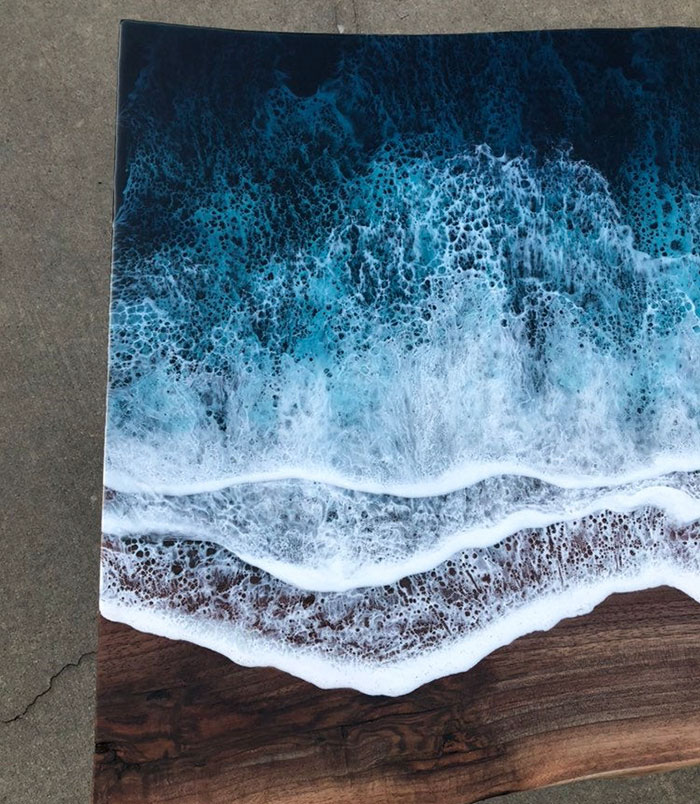 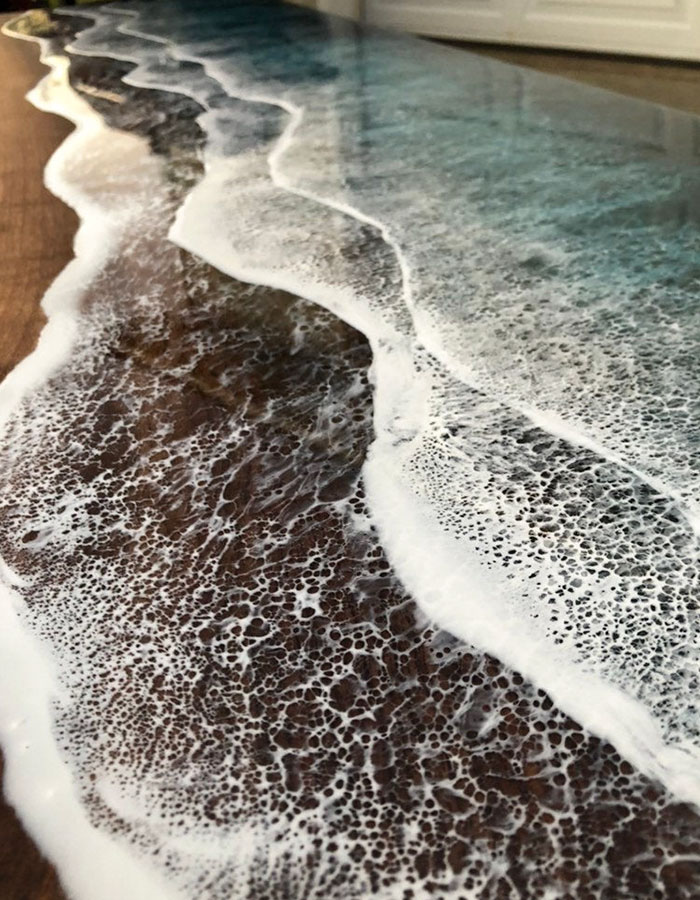 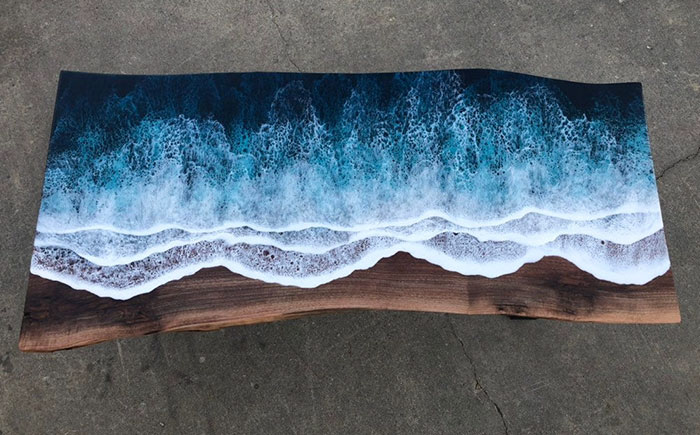 Both artists have a colorful background

Israel-born, Utah-based Wilkins says that living all over the world has exposed her to many forms of art. A decade ago, she became a graphic artist. However, she refused to stay in one lane and decided to explore what else she could do.

“I always want to be pushing myself, and to discover new and exciting things. I still travel and hope to never stop experiencing the world,” Wilkins wrote. 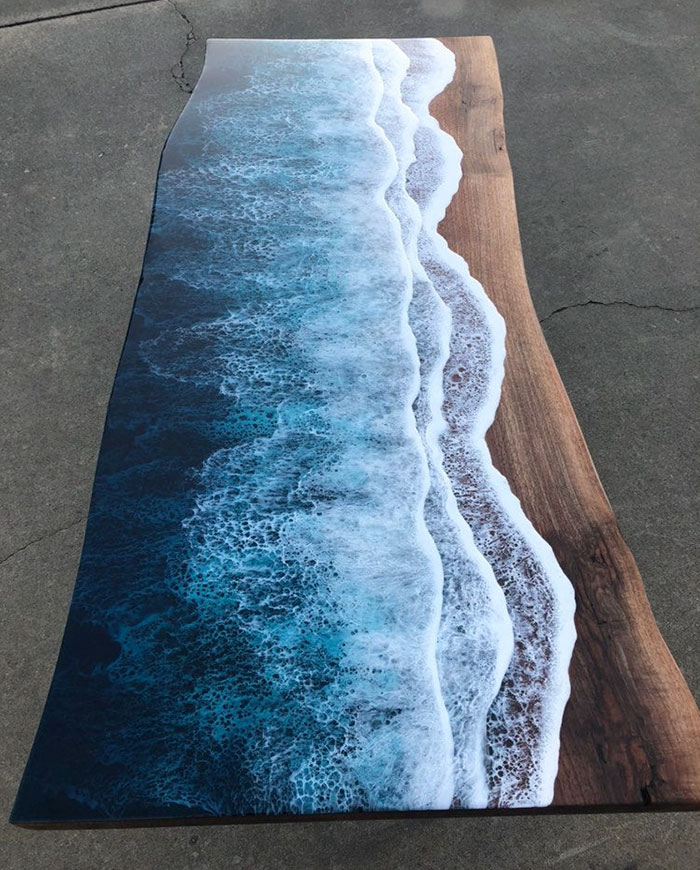 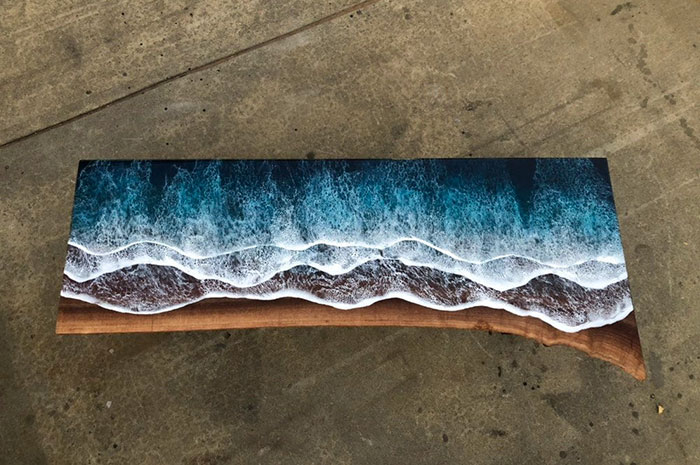 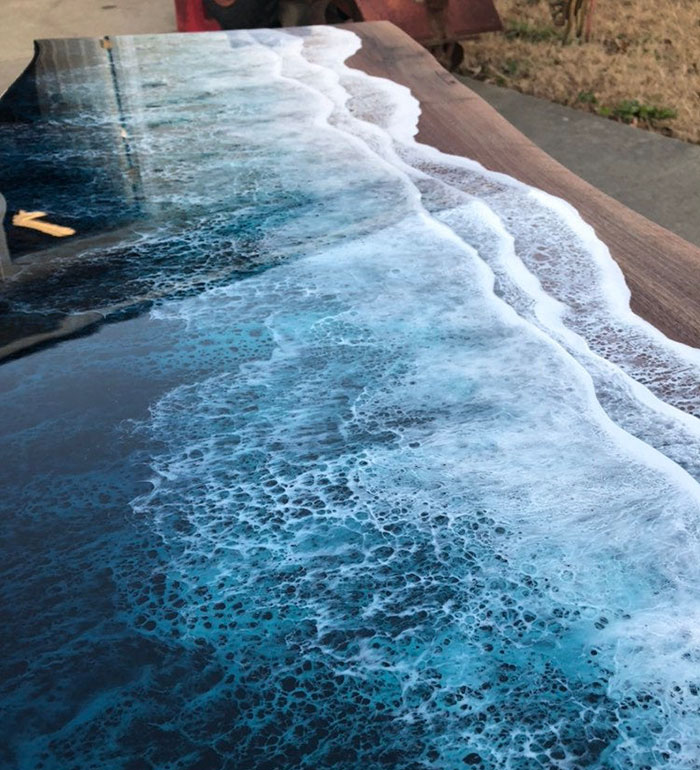 “I stumbled upon fluid art, which led to resin. I love this form of art because it forces me to let go of control. I constantly find inspiration in the world around me but especially in space, the sky and the flow of water.” 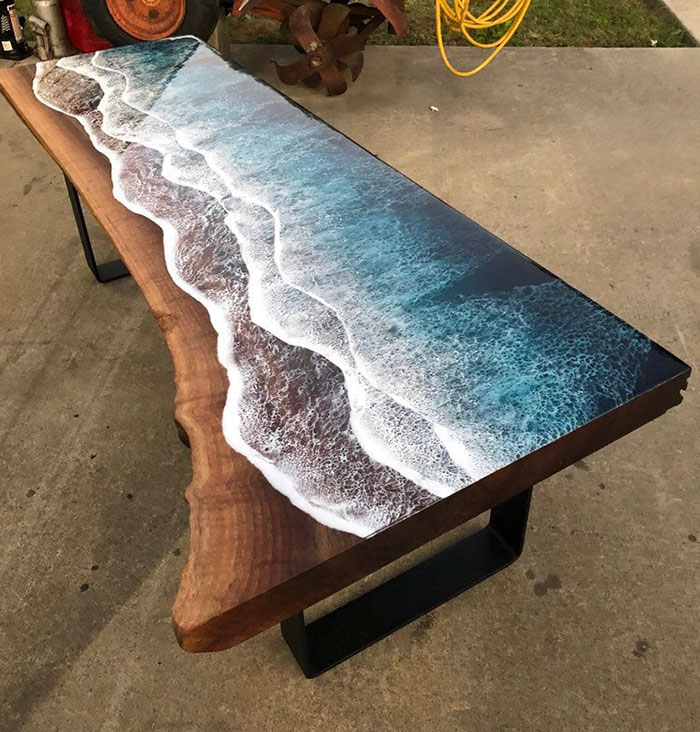 On the part of Davis, he shared that his woodwork background stems from the time he spent with his dad as a child. Jared was always involved in some type of woodwork, since his dad had a construction business. Later, he used the skills he’d picked up to pay his way through engineering school.

We can’t get enough of this ocean-inspired table 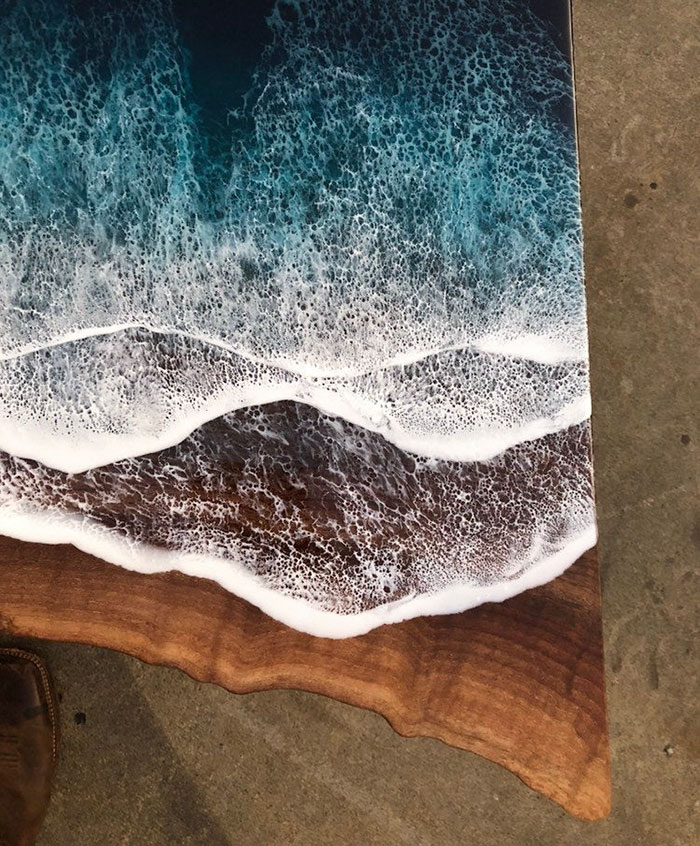 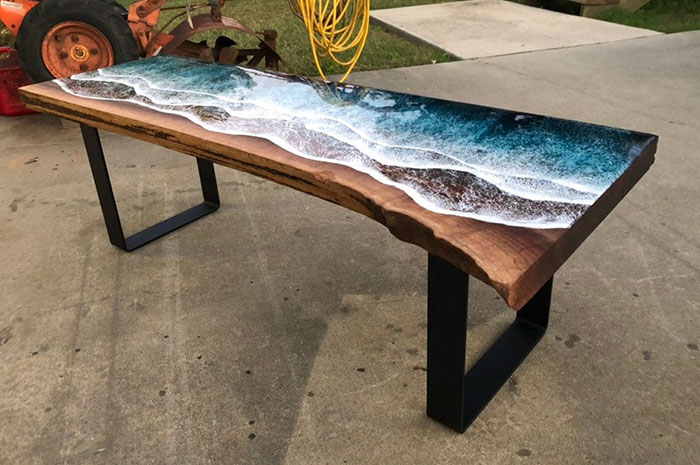 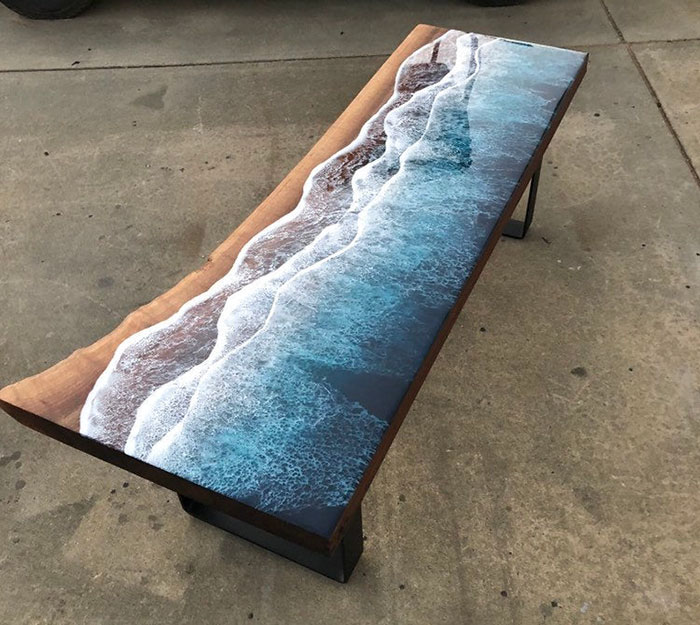 Is it just me or did their ocean wave resin table just give us the chillest of vibes ever? So if you currently have some extra cash lying around, head on over to Jared’s Etsy shop and get the last three remaining ocean wave tables available! Follow him on Instagram to stay updated about any upcoming ocean-inspired collaborations. Suprisingly, Rivka currently has no items listed in her Etsy shop. But we highly recommend following her shop or her Instagram for updates! She adds her magic resin touch onto almost anything. The table’s a certified must-have for any beach bums out there!