2020 is the beginning of a new decade which means that we have a ton new of things to be excited about. Rumor has it that there are new Kit Kat flavors already in the works to deliciously start the new year! 2019 has been a really great year for the wafer snack and its fans. We’ve enjoyed lots of delightful offerings from them this year. One of the most important was Kit Kat Japan’s announcement of its plastic-free wrapping.

This had eco-warriors around the world rejoicing. Now in the final weeks of 2019, Walmart has leaked that the world’s favorite wafer snack brand is testing out some interesting and mouthwatering flavors in anticipation for the new decade. 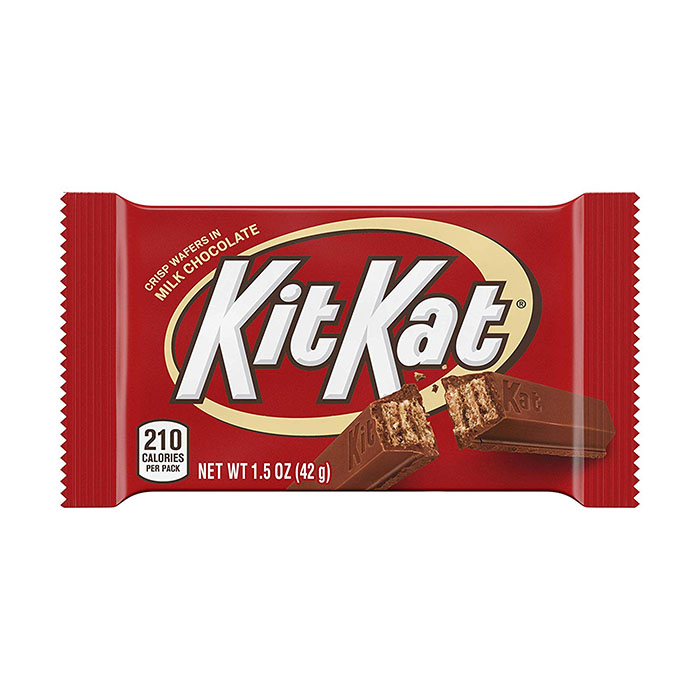 WHAT!!! 2020 is about the be the damn year of @kitkat !! Kit-Kat has leaked a preview of their possible 2020 releases, this is the 2nd public leak next to the @walmart drop. When more info becomes available from the company I will let you guys know..for now, just glimpse at these flavors..Blueberry Pie(fackk), Sweet Potato Pie(OMG), Apple Pie(ok) and from my last post the amazing looking Chocolate Cream Pie.. Which one of these would you devour??????..Pic @kitkat ? #kitkat #2020 #kitkatblueberrypie #kitkatsweetpotatopie #comingsoon #foodnews #foodgasm #hellyea #fatman #hersheys #givemeallthekitkatleaks

Instagram food blogger @markie_devo unveiled the fascinating four Kit Kat variants on November 25. The packaging of the new Kit Kats are strikingly different from usual. For one, the wrapper sports a sleek white look instead of its trademark red. According to the leak, we may be seeing Cotton Candy, Chocolate Cream Pie, Cherry Cola and even Orange Creamsicle Kit Kats stocked on shelves next year. Kit Kat is yet to officially confirm these new items. Hopefully we’ll get to try them all next year!

Kit Kat is no stranger to experimenting. However, Kit Kat Japan certainly holds the title for having the strangest flavor combinations including soy bean powder flavor and mango! People all over the world, us included, pine for these unique Japanese Kit Kats. So the news that Walmart’s might be distributing these new flavors is very good news for us!

? O M G ? So yeah, these are the real deal. Checking in on this gorgeous Thursday to present to you a brand new, limited edition flavor coming soon to a snack shelf at your local town. Kit Kat has returned to the table with an absolute BANGER. When I say banger, I mean it fully. These birthday cake Kit Kats, allegedly releasing early next year, are no joke. In fact, I might go ahead and say that stacked next to every flavor Kit Kat has, these are number two. I normally hate birthday cake iterations. I think 99/100 miss the mark. This, is that one that does not miss. The Kit Kats themselves are a bit harder, as milk chocolate and confection are different, but moving past that, you're delighted to impeccable crunch, and flashbacks to eating spoonfuls of funfetti cake frosting right out of the jar. I know some of you know what I'm talmbout. The funfetti pearls, the crunch, everything about this is an absolute slam dunk. For some, it might appear to be a bit too sweet — which I get. But if sweet is your thing, these will undoubtedly rise through the ranks on your favorites list as well. Do NOT miss them when they touch down. @stoolpresidente might tell me this is a rookie score; he and I are respectfully in our own lanes. This thing right here gets a SOLID, WELL deserved ?9.2/10? 2020 is looking good. ???

Instagrammer @junkfoodleaks added to the hype with their revelation that two other flavors may come out next year as well. The flavors are something we’re all very much familiar with. According to the blog, Apple Pie and Birthday Cake Kit Kats may soon hit Walmart shelves. In comparison with the initial four flavors, the Apple Pie isn’t really new. The variant is actually pretty popular in Japan.

? F O O D C O M A ? Ohh y'all thought I was done done huh? In the spirit of giving and all things cranberry sauce, it seems like a great time to show you yet ANOTHER Kit-Kat gem coming to the US as a limited release — apple pie! Slated for sometime in 2020, these bars of goodness will eventually make their way to shelves across the states, and then swiftly into your belly. Similar to birthday cake, I tend to think many apple pie variants aren't that great. I try them ALL, just to see if someone's cracked the code. Unfortunately, the only person who's ever really nailed it to a T was my two homies @benandjerrys American Apple Pie, which somehow kept crispy pie crust in the middle of ice cream. (???) With that said, these lil babies are great. They're not as artificial as many apple pie products out there. It has a great crunch in the center, which many do not. And of course, it does embody some actual authentic apple flavor! I do think that while tough, stuffing a bit of dried apple in these things would be the one thing that would make them truly amazing. I know these exist in Japan, but I'm not sure what they taste like, so unfortunately I cannot draw a fair comparison. What I will say is that these are certainly not to be missed when they eventually touch down, as they are of course limited, and will undoubtedly be gobbled up ? as soon as they're available. Super crunchy, super cinnamon, and a lot of apple. @stoolpresidente, holla at me sometime. Let's collab. I got you. I'll fly you out west and we'll make some magic happen. These babes get a respectful ?7.9?from me. I do really like them, but it's missing something, and I don't know what it is. I think I'll take them over to McDonald's and have them blended inside of a mcflurry. That might be the move.

Hey you, I heard you like snack leaks, and so did @walmart . Recently Walmart leaked 4 possible 2020 flavors of @kitkat . The flavors are Cotton Candy, Cherry Cola, Orange Creamsicle and Chocolate Cream Pie. I have mixed feelings here, but I’m damn sure excited for Cotton Candy and Choco Cream Pie mmm?..Which one of these would you like to get your hands on??For now sit tight more info coming soon?..Image @walmart ?????? #kitkat #kitkat2020 #newfood #newsnacks #foodnews #suvivorseries #comingsoon #walmart #walmartexclusive #Walmartheardyoulikeleaks.

The white packaging may just be the company’s way of distinguishing which items are on probation before being put on wider circulation. This means that all, some, or none of these flavors will make it to Walmart’s shelves in 2020. These Kit Kats will only be available for a limited time period. So you’d better keep your eyes open for these delightful break-time snacks! Which of these new flavors would you like to try the most?