Tattoo artist Jason Stieva is known for his gothic-style tattoo creations. But his name is also prominent as an assemblage artist. Just like his gothic-style tattoos, his assemblage art also features outlandish bone motives made from ordinary found materials. He has been an assemblage artist for 20 years. His Shallow Grave Studios, which he has been working on for nine years, includes his most popular artworks so far. The studio features sculptures with elaborate designs using grey caustic bones. However, these are not actual bones but rather ordinary materials that are crafted to look like real bones. Out of all his stunning artworks in the Shallow Grave Studios, one particular assemblage piece definitely stands out. Stieva’s pirate ship represents an uncanny ark that evokes a foreboding sense of dread. 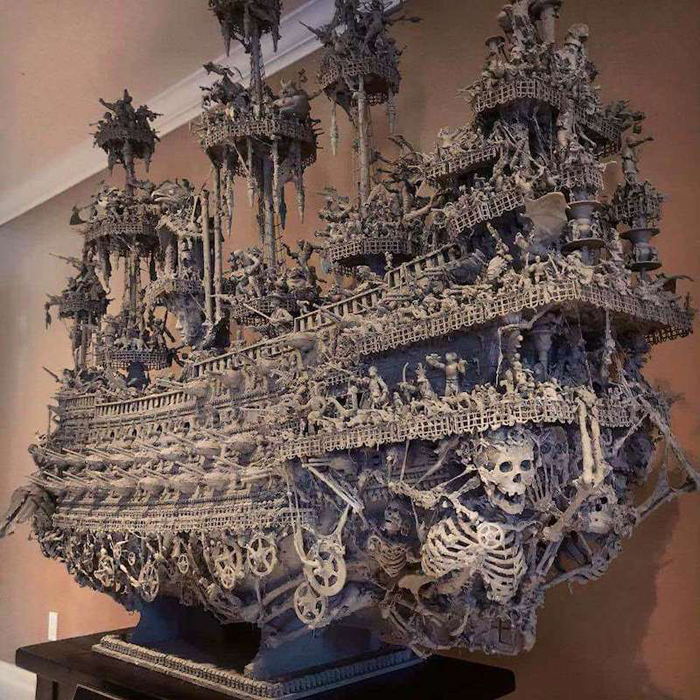 The Ontario-based gothic artist built the ghostly pirate ship by putting together ordinary materials and mechanisms. Figures of human skeletons adorn the bow of the ship with several savage characters as the passengers. Bizarre, unearthly creatures fill the ship’s main deck, forecastle deck mast, rear deck, and even the crow’s nest. The ship itself features intricate details, making it seem to come straight out of a horror movie. It took the artist 15 months to complete the ghostly pirate ship. And the finished artwork stood 8 feet tall and 2.5 feet wide. 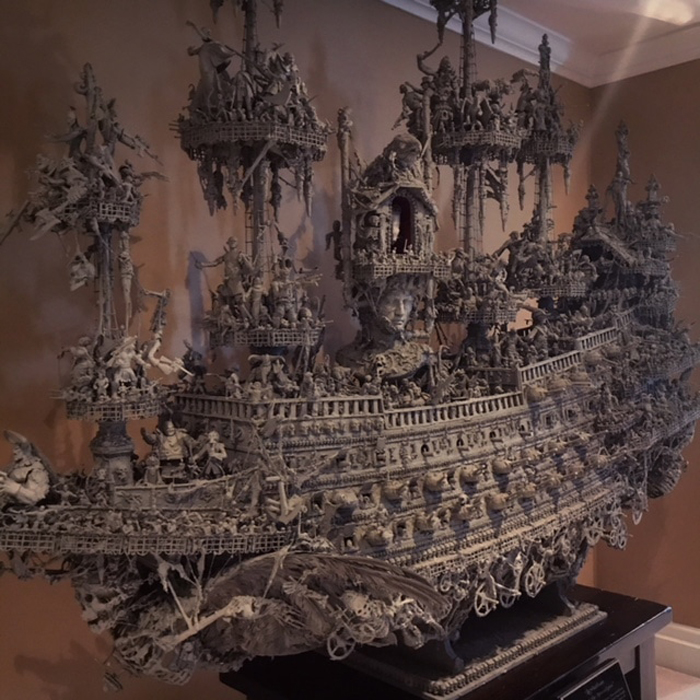 Stieva calls his ghostly pirate ship Leviathan – Ark of the Apocalypse and he admits that constructing this masterpiece is strenuously demanding.

“There is a lot of extremely tedious detail from front to back, top to bottom. Just severing the army heads alone and sanding the back of each to be certain they would sit flush once applied with tweezers took weeks. Sourcing all the characters took quite a while. Redesigning, taking apart, rebuilding, and making the ark structurally sound long before any sculpting began took quite a while.”, he shares. 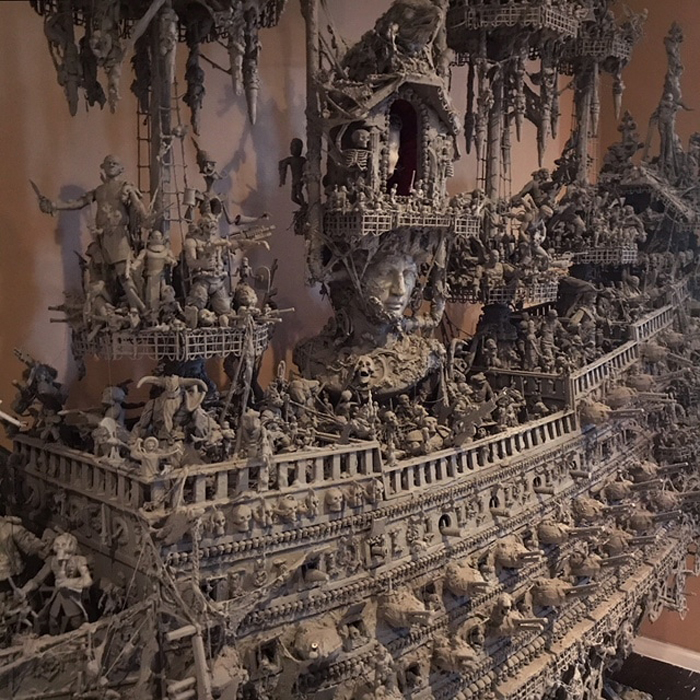 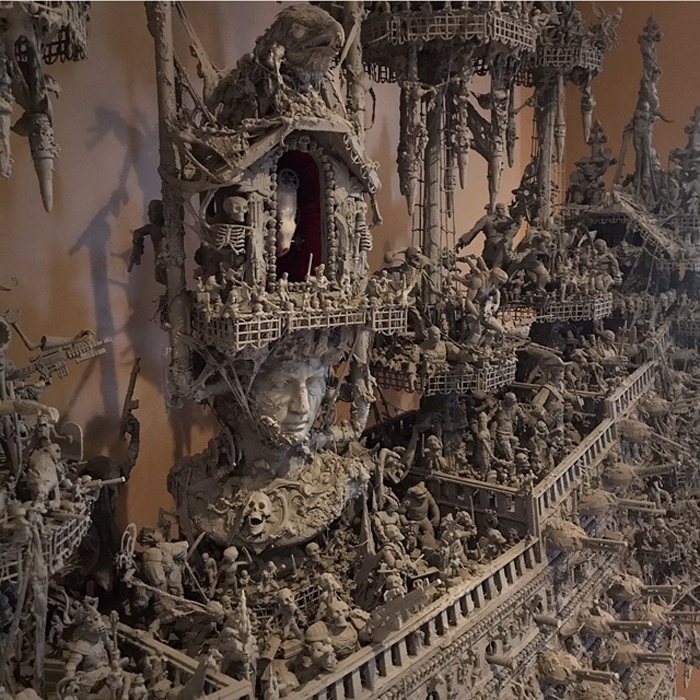 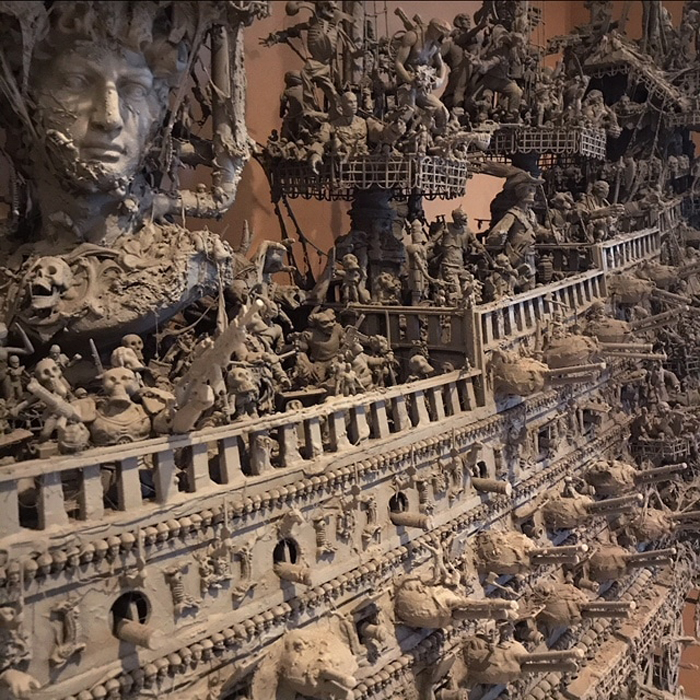 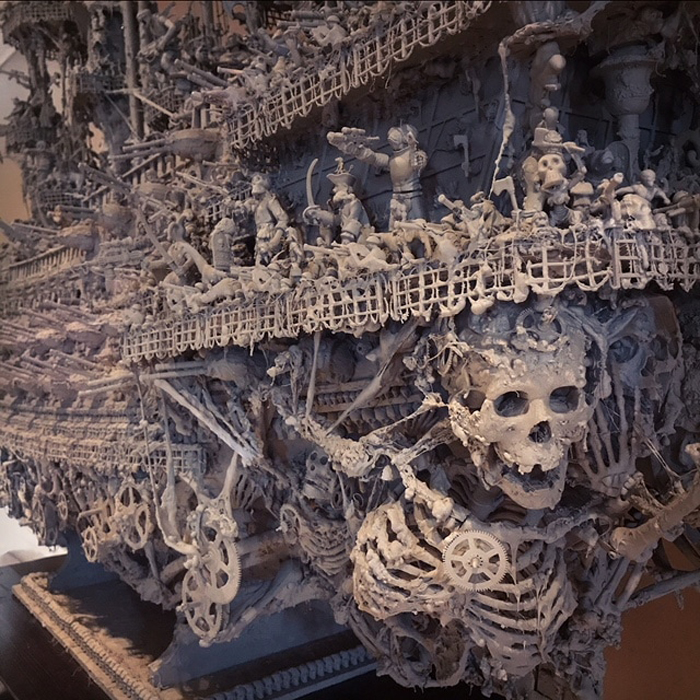 The ghostly pirate ship is now owned by one of Stieva’s clients who is a huge fan of phantom ships. In fact, the particular client also has a ship tattoo inked on his chest by Stieva himself. As for Stieva, he still continues to create sculptures on his free time. When he’s not making tattoos, he’s probably hunting through thrift shops, flea markets or garage sales to search for usable materials for his next project.