The boom of social media has led to the rise of clothing for pets on the market. Posting photos of cats and dogs dressed up in creative and often funny outfits has become a trend among pet owners. And if you want to win the game of pet fashion, this cool guitarist dog costume is a sure-fire way to put other pet outfits to shame. With this hilarious outfit on, your canine buddy is going to rock the world.

The dog costume comes in a humorous design that will turn your pooch into the cutest rock star you’ve ever seen. It features a blue-and-white stripe shirt and white pants with a pair of tiny arms holding a mini guitar. To put it on your dog, secure the collar around its neck with the use of the Velcro strap. Then slip its forearms into the pants. When viewed at the front, the outfit amusingly transforms your doggo into a tiny guitar man. And it’s certainly the most adorable thing you’ll ever see. 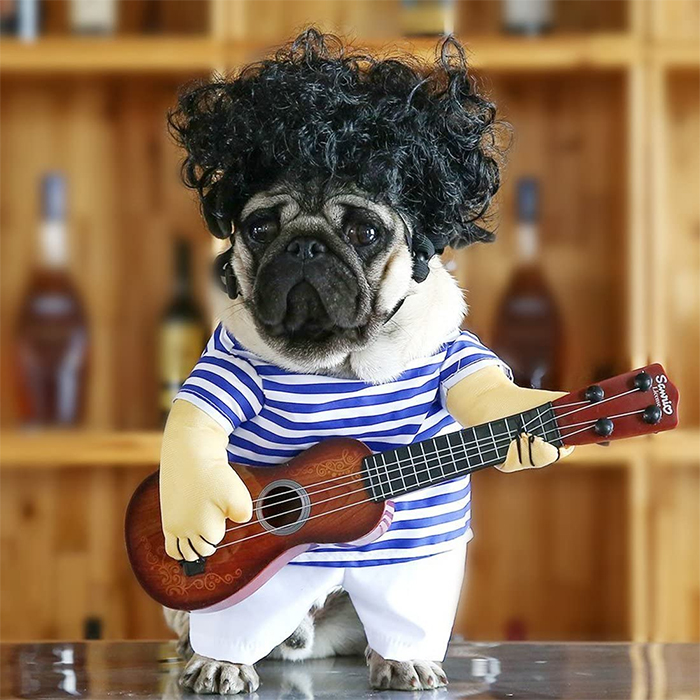 This costume is made of polyester and non-woven fabric which is breathable and soft to the touch. The soft fabric makes it more comfortable for your canine to wear it. But just like any other pet costumes, this should only be used for photographic purposes and special occasions only. Hence, this is not recommended to use as everyday wear as the outfit might restrict their movements. Furthermore, your pet may struggle with the additional weight. 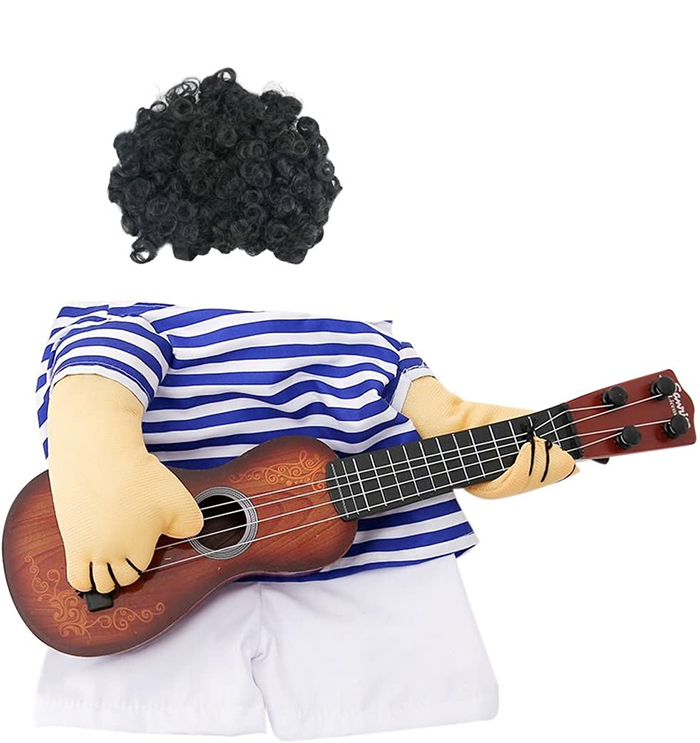 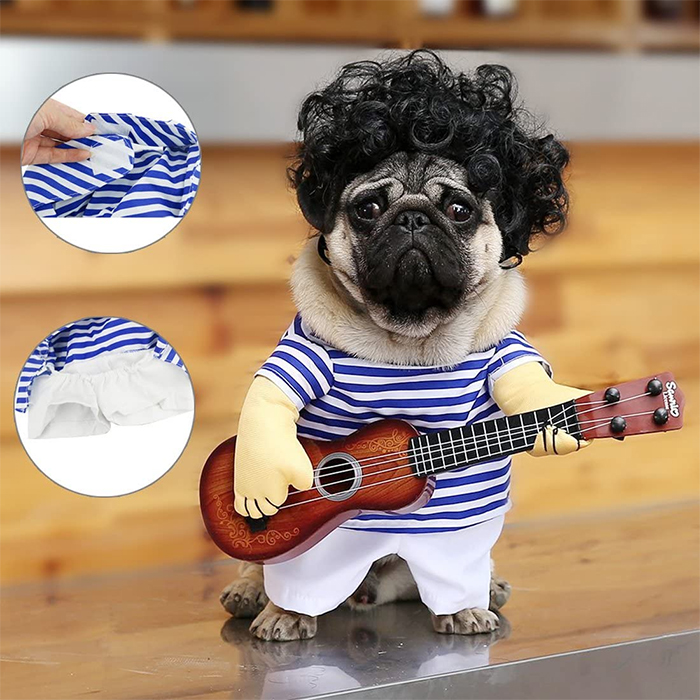 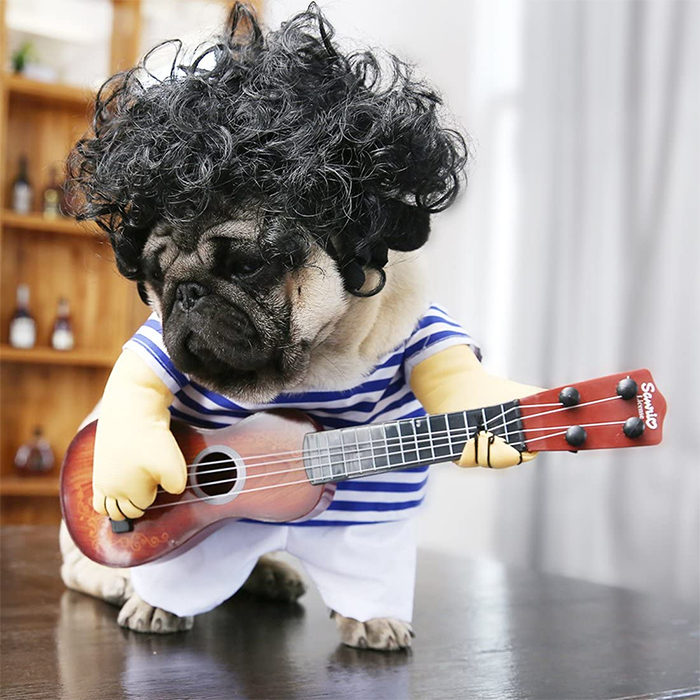 To make your canine rock star look more hilarious, put the included curly wig on its head. The ensemble is guaranteed to make everyone roar with laughter. The dog costume is available in medium, large and extra-large sizes. And did we forget to tell you that it looks hilarious on cats too? So yeah, even your furry kitty can become the most badass rock stars with this outfit. One satisfied buyer wrote:

“It was soooo cute, we couldn’t stop laughing. [My dog] is clearly not a costume guy, but he was not hurt in anyway. These are made very well, no strings hanging to get hurt on, and they go on very easy.” 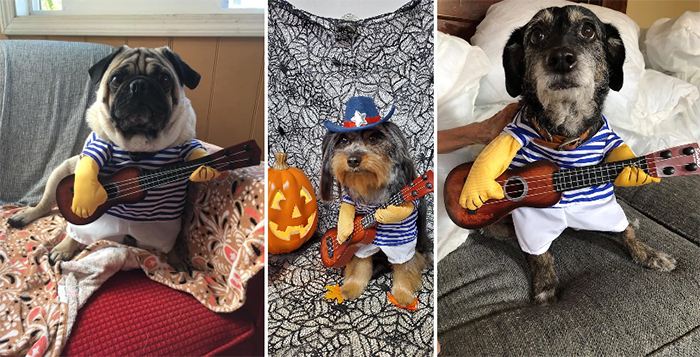 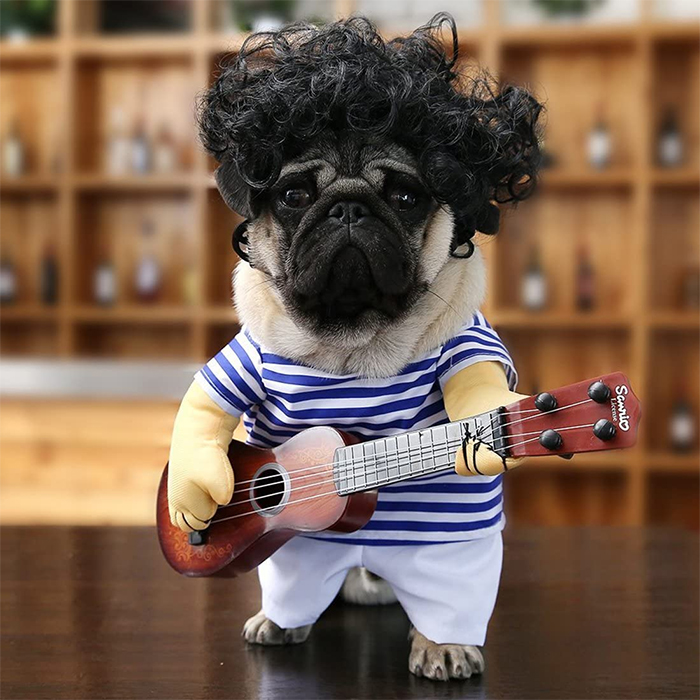