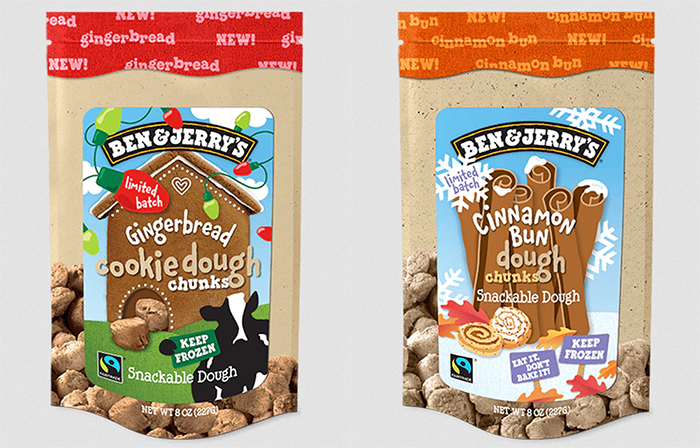 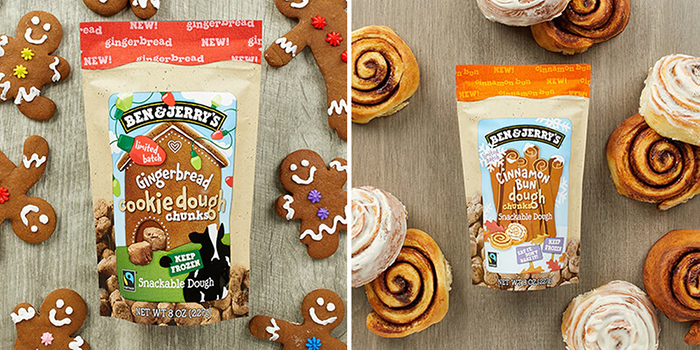 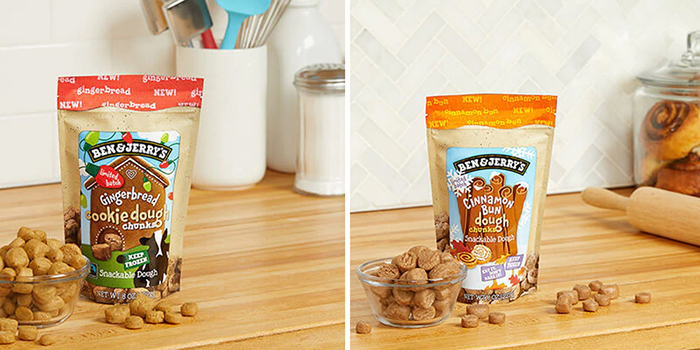 “There’s no better way to ignore the heat and start planning for season’s greetings,” Jody Eley, Ben & Jerry’s innovation manager, said in a press release. “The Gingerbread Cookie Dough Chunks are like building a holiday house in your mouth – the sweetness and spices are just like you remember as a kid. The Cinnamon Bun Dough Chunks will get you in the mood for special weekend brunches, and they’re vegan!” 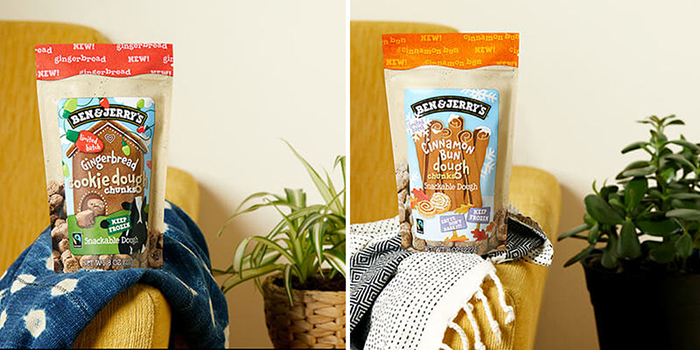 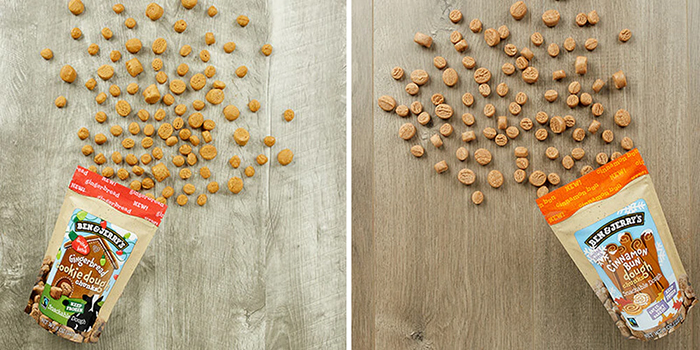 You can find these festive goodies in the freezer aisle of your nearest stores and participating Scoop Shops nationwide. Who’s ready to snack on and feel the holiday spirit? It’s never too early!

@benandjerrys does the lords work 7 days a week not just on Sunday’s. From those delicious Netflix collab flavors to this exciting news? There are two new edible cookie dough options heading to stores now. The two flavors are Cinnamon Bun & Gingerbread. These limited batch flavors will join the other 5 edible cookie dough options(image 3)? These seasonal flavors look like a good time indeed. I’ll be devouring this for a joyous review very soon. I’m eyeing these both, but Gingerbread speaks to me in love language??? You will be able to get these in any store that sells the brand including the Ben & Jerry’s scoop shops. Keep eyes pealed they are coming. I will post updated locations as found? Thanks Lindsay and Laura @benandjerrys for the early holiday cheer? Do you need these in your life?? #benandjerrys #ediblecookiedough #cinnamonbuncookiedough #gingerbreadcookiedough

YESSSSS! ? Ben & Jerry's has something seriously yum in mind for the fall and winter seasons! The new Ben & Jerry's Cookie Dough Chunks are coming soon to a freezer aisle near you! ? These new limited batch flavors are Gingerbread and Cinnamon Bun – and holy moly are they good! B&J sent some over to the swamp for us to taste, and we ate them up FAST! While both are spot-on with flavor, and have the perfect cookie dough texture, our favorite was definitely Gingerbread. Which flavor has you drooling? ?

It’s Review Time! ???? @benandjerrys is back once again and this time they have brought the wonderful season of Christmas to our homes a little early this year! I present there two newest creations, Gingerbread Cookie Dough Chunks and Cinnamon Bun Dough Chunks! • • Now I want to start off by giving a HUGE shoutout to @benandjerrys for sending me this package to review, thank you so much! Now Christmas is my favorite holiday, so I was soooo excited to open this package and see that were getting Christmas themed items insanely early! Ahah ? Now these will be available in supermarkets and participating scoop shops nationwide anyday now with a retail price of 4$-5.50$ depending on the location! Now with these two new flavors that brings the chunk lineup to a total of SEVEN FLAVORS, now that’s a epic lineup! So let’s start with my favorite which was Gingerbread Cookie Dough Chunks! Now upon opening these I was greeted with that warm cinnamon gingerbread smell that was as if I had closed my eyes and was transported to christmas day and my mom was making fresh gingerbread, I could leave the bag open all day just for the smell! ? ahah. Now the taste is spot on and very fresh! Ginger is very upfront on the taste and cinnamon comes in right behind it and then I get the molasses right at the end! The color of these is a light brown compared to the dark brown counterpart of the cinnamon bun which I honestly thought would be switched! Ahah. Now next up is the Cinnamon Bun Dough Chunks! Now this doesn’t say “cookie” in the title so this makes me think that it is a different type of chunk and that the dough is directly from the cinnamon bun itself! Idk if that’s possible but if that’s the case man is that unique and cool! The smell on these is strange, you have your cinnamon and vanilla but theres something else I just cannot put my finger on! Now the taste JEEZ these are STRONG lol the cinnamon and vanilla hit you with a PUNCH and whatever that secret ingredient is! Although these are strong there still good I just can’t sit and eat alot of them at a the like I can with the Gingerbread one’s! •Gingerbread 8.5/10 ? •CinnamonBun 7/10 ?

I want everyone to burn this phrase deep into their brains: “SEASONAL. CHUNKS.” ???? Ben & Jerry’s is adding two limited time snackable dough chunks to their lineup: Cinnamon Bun and Gingerbread. They are both so jolly and merry and wonderful. The gingerbread is terrific-ly spiced and hopefully it finds its way into a Ben & Jerry’s pint in the near future (hint hint, wink wink, @benandjerrys.) But it’s difficult for me to properly articulate just how much I love the Cinnamon Bun chunks. ?? You can taste the icing. It’s the real deal. These are coming to retailers and scoop shops soon. We must take every win we can get in 2020 and these are a win for sure. Thanks Ben & Jerry’s for the free product!