Banksy Shows Of His Latest Paintings In Venice With Unauthorized Stand

Banksy displayed his “Venice in Oil” paintings, though unauthorized. How fascinating!

While the Venice Biennale was ongoing, a world-renowned artist made sure his presence was felt, whether he was an official guest or not. It was the street artist named Banksy—he was famous and well, he was mysteriously in Venice.

How did he let the world know? It was through his Instagram. It was in this social platform that he released his official images. He was publishing his artwork in IG, making his presence felt in the world of art.

“Despite being the largest and most prestigious art event in the world, for some reason, I’ve never been invited.”

This was what Banksy mused on Instagram. Moreover, in a short video, you’ll see how he displayed his artworks on the sidewalk. Yes, he was there with fellow artists as well as vendors of souvenirs! 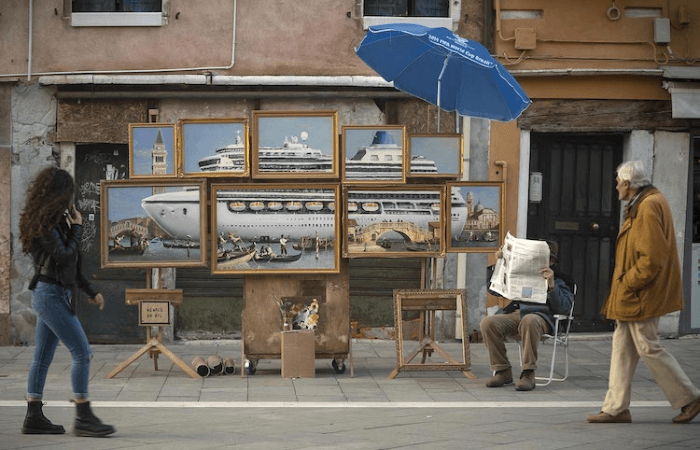 The Banksy Venice In Oil Painting And Its Twist

Banksy’s “Venice in Oil” paintings apparently blended well with the ambiance of the place, which is quite romantic.

But, there’s a twist.

As you would expect from Banksy, his portrayal of the lagoon is quite more realistic than what you’d typically consider being. If you were there, you would see a large cruise ship. It would be docked along the walkway there in St. Mark’s Square.

If the painting weren’t real, it would look funny! But, if you would recall, Venice has had a long history battling with cruise ships. This city thrives on a tourist-driven economy.

Over the years, Venice has been at war with cruise-ship companies. These would like to have their largest boats parked right in the center of the city. If implemented, this would make Venice readily accessible to tourists. But, it would have a substantial negative impact on the environment.

One awareness campaign called “We Are Here Venice” once warned against the damage the cruise ships can cause. It then pushed a referendum in 2017 which directed to ban such large ships. Voters eventually made the proposed ban win.

Nonetheless, even if the law against the ships being at the historic center has already been passed, it can take years before it can be implemented. Thus, what Banksy did was quite significant. The Banksy Venice in Oil paintings have surely brought up the issue to people’s minds again.

No authorized person has ever invited Banksy to the Venice Biennale. He went and showcased his paintings anyway.

Well, Banksy’s showcase, unfortunately, didn’t last long. Soon after, authorities checked on his permits—if any. Of course, the street artist had to move along. After all, people have already recognized his funny but thought-provoking stunt.