The Starry Night (1889) is indisputably the most famous painting of Vincent van Gogh. Its unique brushwork, vivid colors, and swirling patterns would always denote van Gogh’s style of painting. But did you know that the Dutch post-impressionist artist has another Starry Night painting? In fact, he created it several months before he made the iconic Starry Night. Vincent van Gogh painted the Starry Night Over the Rhone during his stay in Arles. And it was one of his earliest works in the last two years of his life.

Vincent Willem van Gogh’s life has been widely exhibited quite as much as his works. Most artists would attest to the wearisome life of being an artist. But no other artists in history have a more heartbreaking story than van Gogh. Born and raised in Netherlands, he had shown intense interest in art when he was a child. At the age of 27, he decided to become a full-time painter. Unfortunately, his career as an artist did not prosper in the Netherlands. He later decided to move to Paris where his brother Theo was working as an art dealer in 1886.

However, the aspiring artist also failed to find success in Paris. In his letter to Theo in 1888, he expressed his frustration about his futile attempt in the capital city of France.

“It seems to me almost impossible to be able to work in Paris, unless you have a refuge in which to recover and regain your peace of mind and self-composure,”, van Gogh said in his letter. “Without that, you’d be bound to get utterly numbed.” 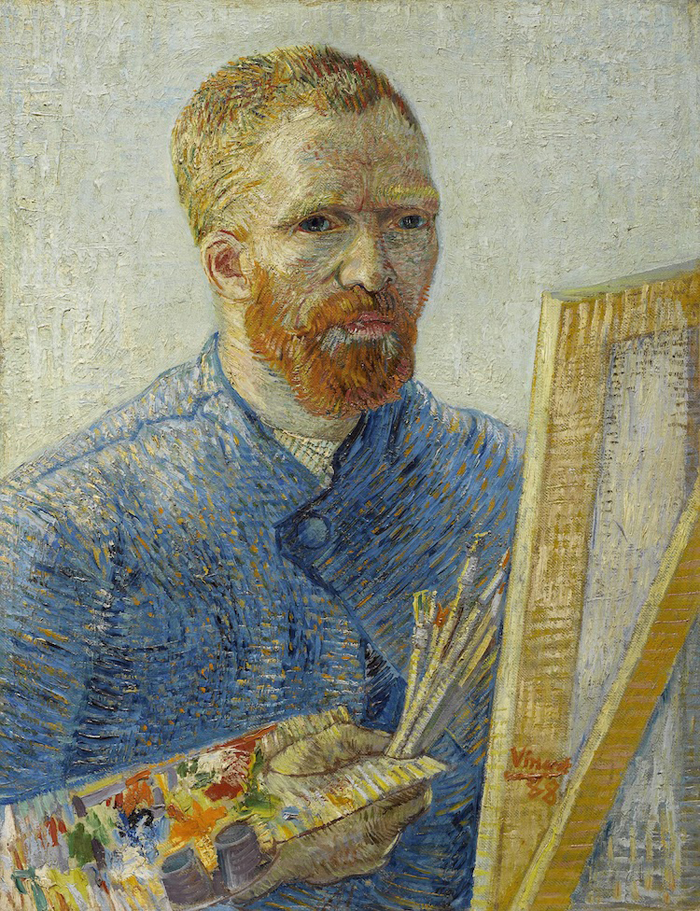 In order to find peace of mind and self-composure, he decided to leave Paris and moved to the peaceful commune of Arles in the south of France. During his stay in Arles in 1888, he spent most of his time painting the serene city. His earliest works include Bedroom in Arles, Café Terrace at Night, and Starry Night Over the Rhone. 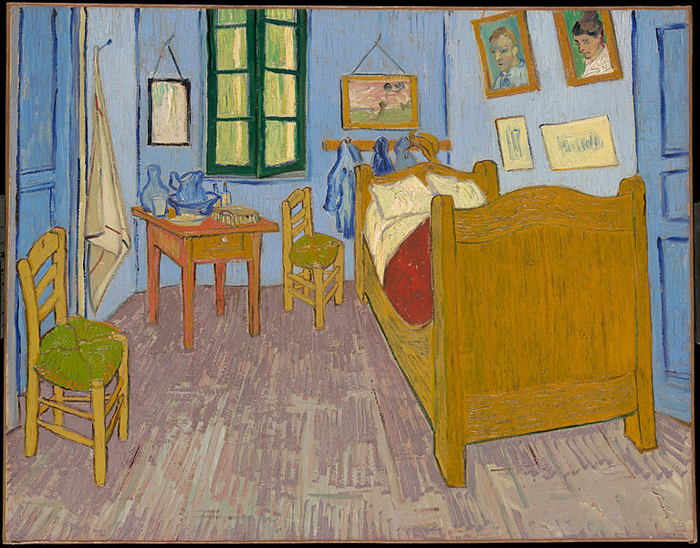 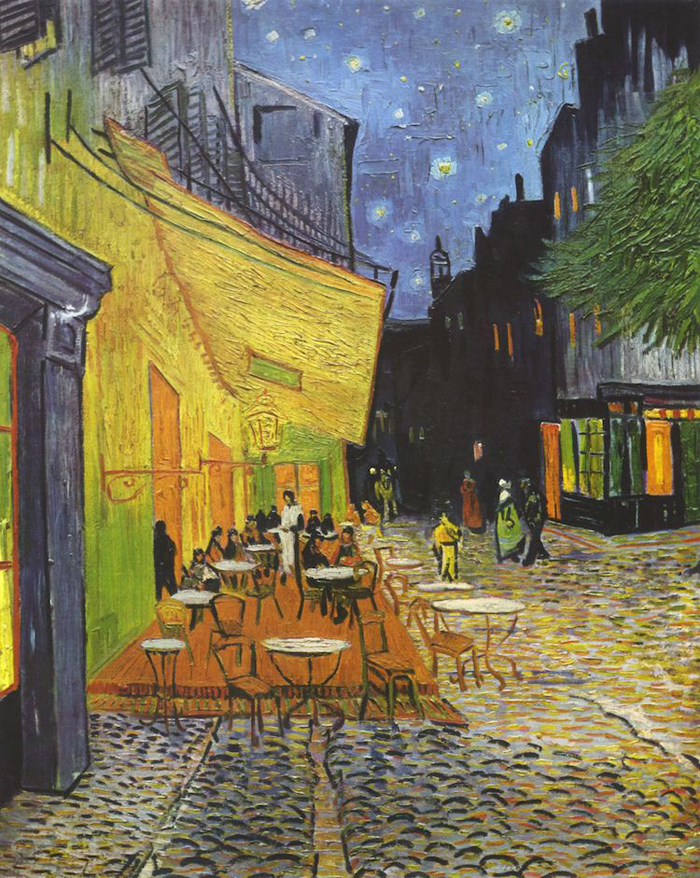 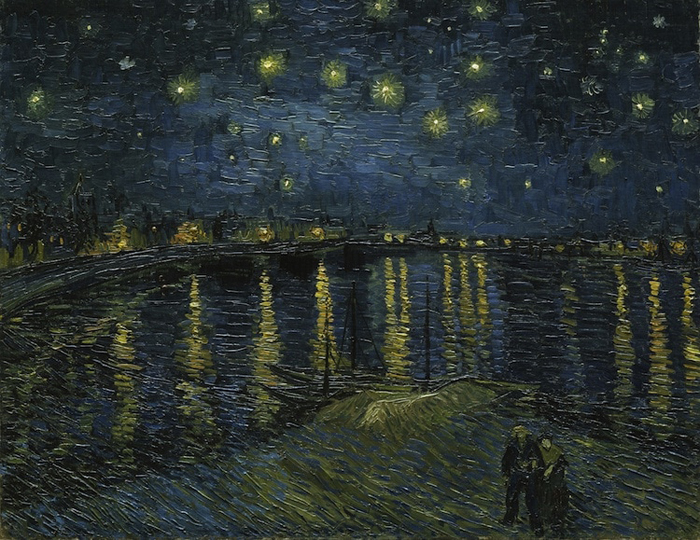 Through this series of paintings, he started to develop his unique style of using vivid colors and striking brushwork. Unlike his famous Starry Night, the Starry Night Over the Rhone depicts a tranquil ambience. It features glimmering stars – without the swirls – against the night sky as the lights shine over a couple.

After completing the Starry Night Over the Rhone, he discovered his fascination towards ‘night effects’. Since then, he has manifested great interest in painting night lights – whether stars or gas lamps – that create sparkling reflections on water. In his letter to Theo, he explained his great attention to color selection.

“The sky is aquamarine, the water is royal blue, the ground is mauve. The town is blue and purple. The gas is yellow and the reflections are russet gold descending down to green-bronze.”, he wrote in his letter.

Despite the energetic colors, van Gogh’s depiction of the Rhone River had a sense of calmness and serenity. These characteristics embodied his state of mind at the time. But no one ever thought that this was a prelude to his mental struggle. His mental illness began to manifest after a heated argument with his fellow artist and friend Paul Gauguin. At the heat of the moment, van Gogh allegedly cut off part of his left ear with a razor. Since then, the troubled artist had suffered from delusions and psychotic episodes. He drank heavily and refused to eat, often neglecting his physical health.

When he realized the severity of his mental instability, he left Arles to be admitted into Saint-Paul Asylum, a psychiatric institution in Saint-Rémy-de-Provence. He spent a year in the asylum and was attended by Dr. Theophile Peyron. In between attacks, he made numerous oil paintings, using Saint-Rémy as the main setting for his artworks. Although his signature brushwork and vivid colors are still evident on his works, most of them reflect the artist’s inner turmoil. On June 1889, he created the Starry Night, inspired by his previous work Starry Night Over the Rhône. Violent swirling strokes of paint in very thick layers, his latest works seemed to represent his troubled psyche at the time. 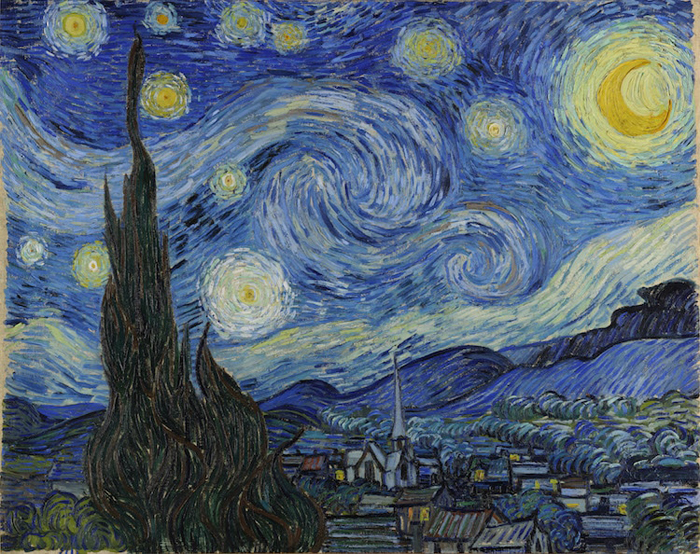 In May 1890, Dr. Peyron pronounced him cured. Instead of returning to Arles, he headed north to the village of Auvers-sur-Oise. And in the morning of July 29, 1890, he shot himself in the stomach while inside his room at the Auberge Ravoux. He died two days later.

After his death, Theo made an effort to make his brother’s unfulfilled dream come true by loaning out the artworks for exhibitions. Sadly, Theo also passed away six months after Vincent’s death. Theo’s widow, seeing the great potential on van Gogh’s paintings, continued Theo’s unfinished business. Until finally, the world took notice of van Gogh’s exceptional masterpieces. Today, Vincent van Gogh is considered as one of the greatest artists in history. And his paintings belonged to the elite list of the most priced masterpieces in the world.