At first glance, you may think that this sculpture is actually covered with translucent fabric. Take a closer look and you’ll realize that the veil isn’t textile but rather marble. That’s the marvel of The Veiled Virgin, a 19th century sculpture by Italian artist Giovanni Strazza. For years, the translucent marble veil of this masterpiece has mystified people who have set eyes on it. And I’m sure you are, too.

Marble has always been the most preferred material among sculptors even in the early times. Due to its texture and translucence, it is most suitable for making intricate details such as flowing drapery. Strazza’s The Veiled Virgin is one of the greatest proofs of that. Without a doubt, the translucent marble veil is the most striking feature of this sculpture.

This is probably the first time you’ve heard about The Veiled Virgin. Or even if you do, you probably have no idea who made it. Historians claim that it was crafted by Giovanni Strazza while the sculptor was working in Rome between 1840 and 1858. While Strazza is notably recognized for this sole creation, he made sure that his work proves one of a kind. And he sure did.

Strazza depicts the Virgin Mary with her eyes closed and head slightly tilted down as if she is solemnly praying. It’s not an unusual sight to see Virgin Mary with this kind of expression. But what really makes this work distinct from other Mary sculptures is its translucent marble veil. It has a very realistic veil cloaked over the head of the bust figure. In fact, the translucent veil is so realistic that it may seem to move with the wind anytime soon. 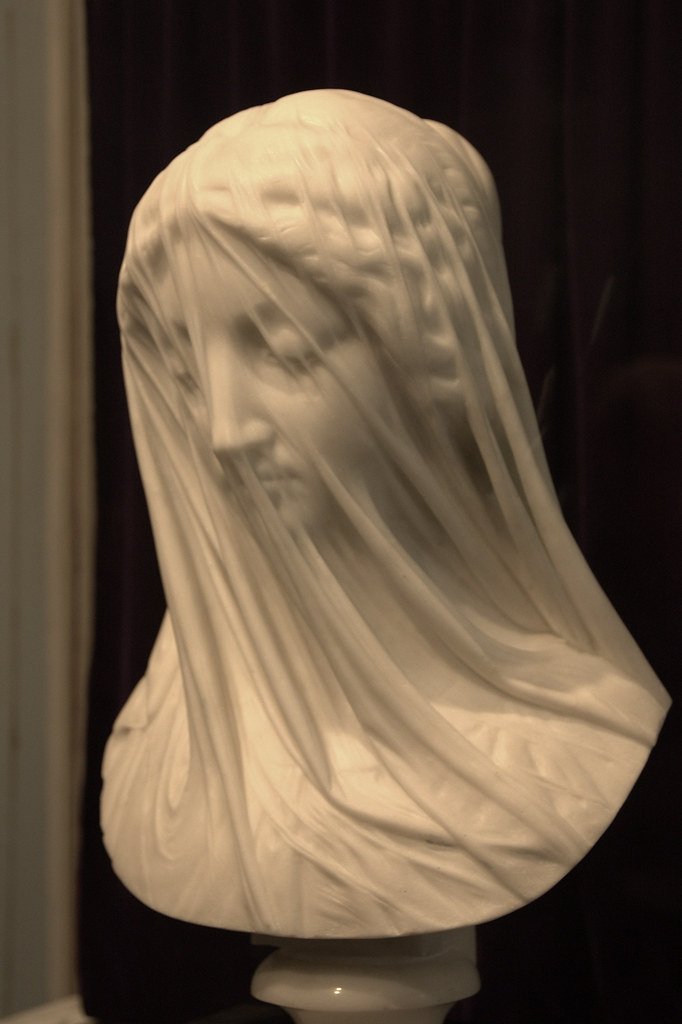 The entire sculpture is crafted from Carrara marble, a type of white or blue-grey metamorphic rock mostly found in Tuscany. This material is a very popular choice in making sculptures and decors. And it’s the perfect medium for sculptors to create draperies in their works such as clothes and veils.

Aside from Strazza, there are also other sculptors who have made sculptures of women with heads covered in see-through fabrics. Both Rafaello Monti and Pietro Rossi have each their own versions of The Veiled Lady which closely resemble Strazza’s work.

The Veil in Sculpture

Making translucent marble veil requires intricate workmanship and deep attention to details. But why is this feature so popular among 19th century sculptors? Probably the main reason is that this detail allows them to showcase their expertise of the craft. Turning a metamorphic rock into a delicate, flowing garment seems like an impossible feat. Amazingly, these sculptors would dare to do the impossible. Therefore, during the 19th century, the use of flowing draperies has become a trend. And the art of sculpture has become a battle of the draperies.

It is also notable to point out that the image of a veiled woman has become the symbol of unity in several countries. There’s Lady Liberty of the United States, Lady Britannia of England, and Lady Hibernia of Ireland.

The Veiled Virgin in Canada

Since The Veiled Virgin was made by an Italian artist, it’s only safe to assume that it stays in Italy. But that’s not the case. Strazza’s masterpiece was initially housed in the Episcopal Palace next to St. John’s Basilica in Canada before it was transferred to the nearby Presentation Convent. It was transported from Rome to Canada in 1856 and has remained in St. John’s for over 150 years.